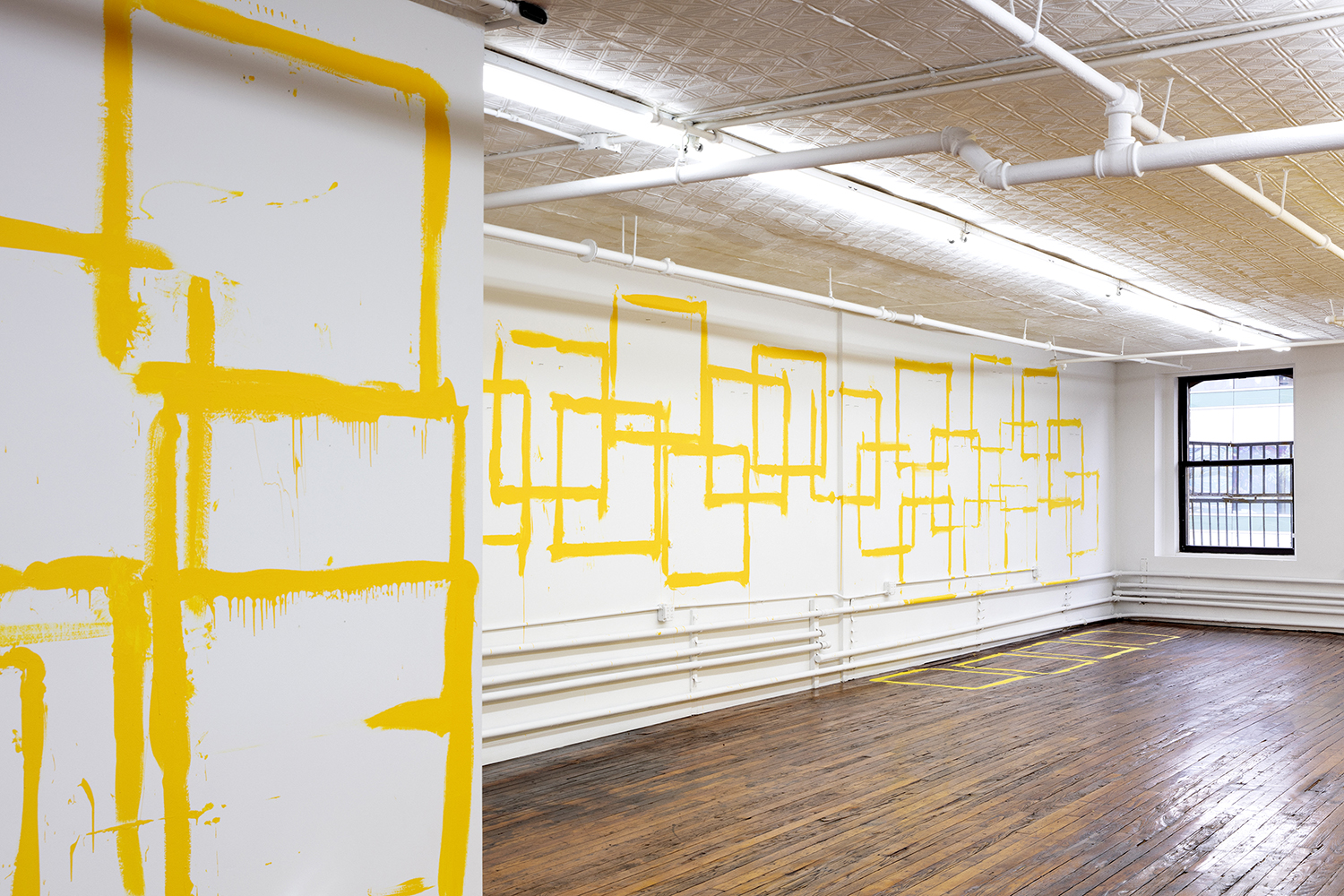 Installation view of Claude Rutault, A Proposal to Peter Nadin, 1979; realized 2022 at Off Paradise.
Photo: Photograph by Guillaume Ziccarelli. Courtesy of the artists and Off Paradise.

A project 43 years in the making, the installation is based on a proposal by one of the most important French artists of his generation

If there ever was an age of innocence in the New York art world, it might have been in the 1970s, when Conceptual art was cool and selling it rarely mattered. It was during this time that Claude Rutault, one of the most important French artists of his generation and a pioneer of Conceptualism, was an artist-in-residence at the Institute for Art and Urban Resources, now MoMA PS1. Exploring the avant-garde art scene in SoHo and TriBeCa in 1978, he met like-minded artists Christopher D’Arcangelo and Peter Nadin, who had just launched an art space for experimentation in the latter’s loft at 84 West Broadway, where fellow French Conceptualist Daniel Buren was exhibiting.

Seeing a relationship between the ideas being investigated at 84 West Broadway and the category of art he was exploring in his work, Rutault made a proposal to Nadin for the realization of one of his conceptual pieces. However, due to the tragic suicide of D’Arcangelo, the run of shows at 84 West Broadway came to a quick end and Rutault’s proposal remained an idea on paper. It was filed away in the artist’s archive, until now, when it has finally been completed for the exhibition “A Proposal to Peter Nadin,” which is on view through February 19 at Off Paradise in New York. 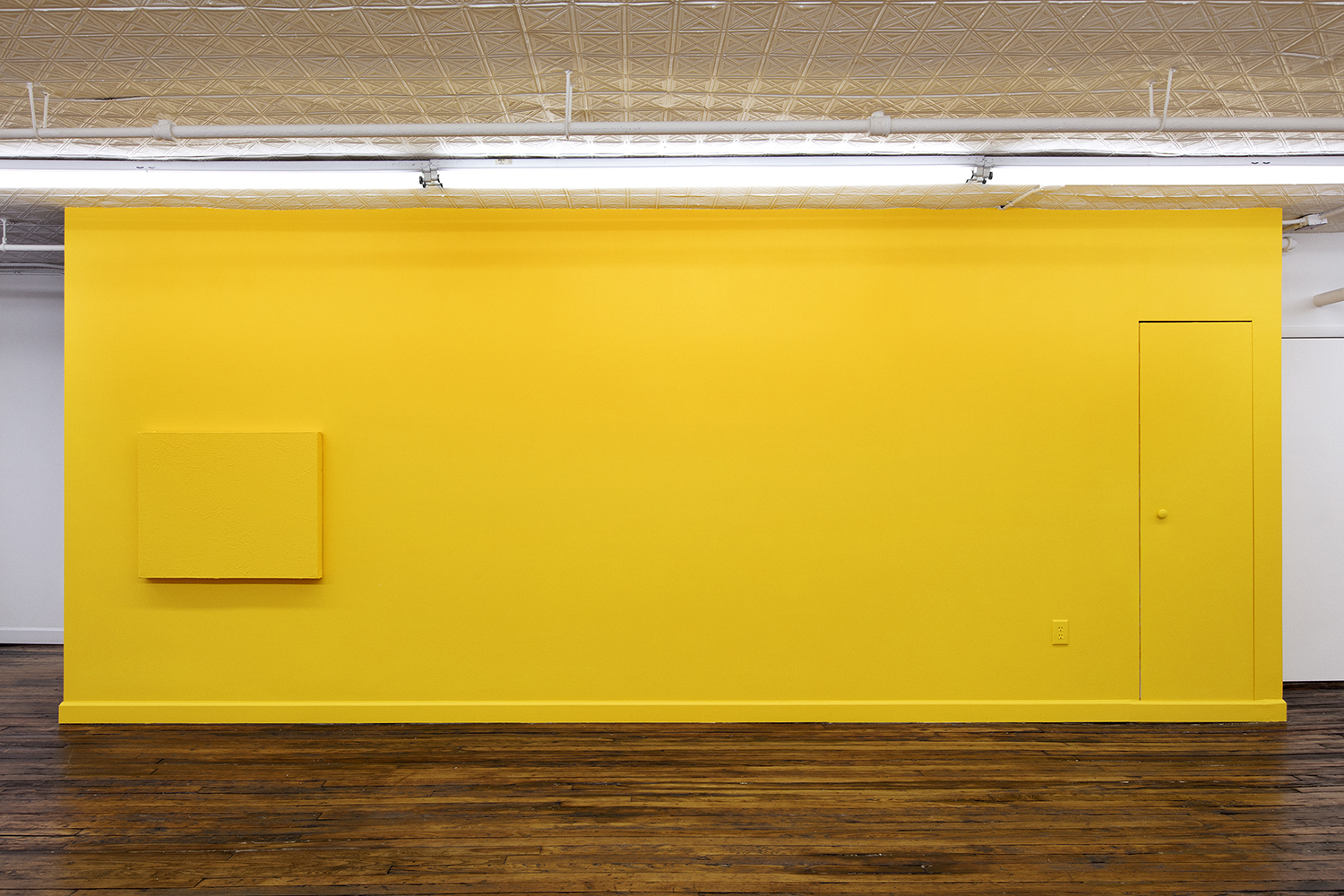 Installation view of Claude Rutault, A Proposal to Peter Nadin, 1979; realized 2022 at Off Paradise. Photo: Photograph by Guillaume Ziccarelli. Courtesy of the artists and Off Paradise.

Off Paradise founder Natacha Polaert discovered the unrealized work when she was researching Rutault’s archive for another project in 2014. She told Rutault that she would find Nadin to complete the concept, which proposed a canvas being painted the same color as the wall. One of Rutault’s signature styles of conceptually creating a painting, which purely exists as written instructions executed by a “charge-taker,” the idea has been repeatedly realized to make his works for exhibitions around the world since the first one was created in 1973. 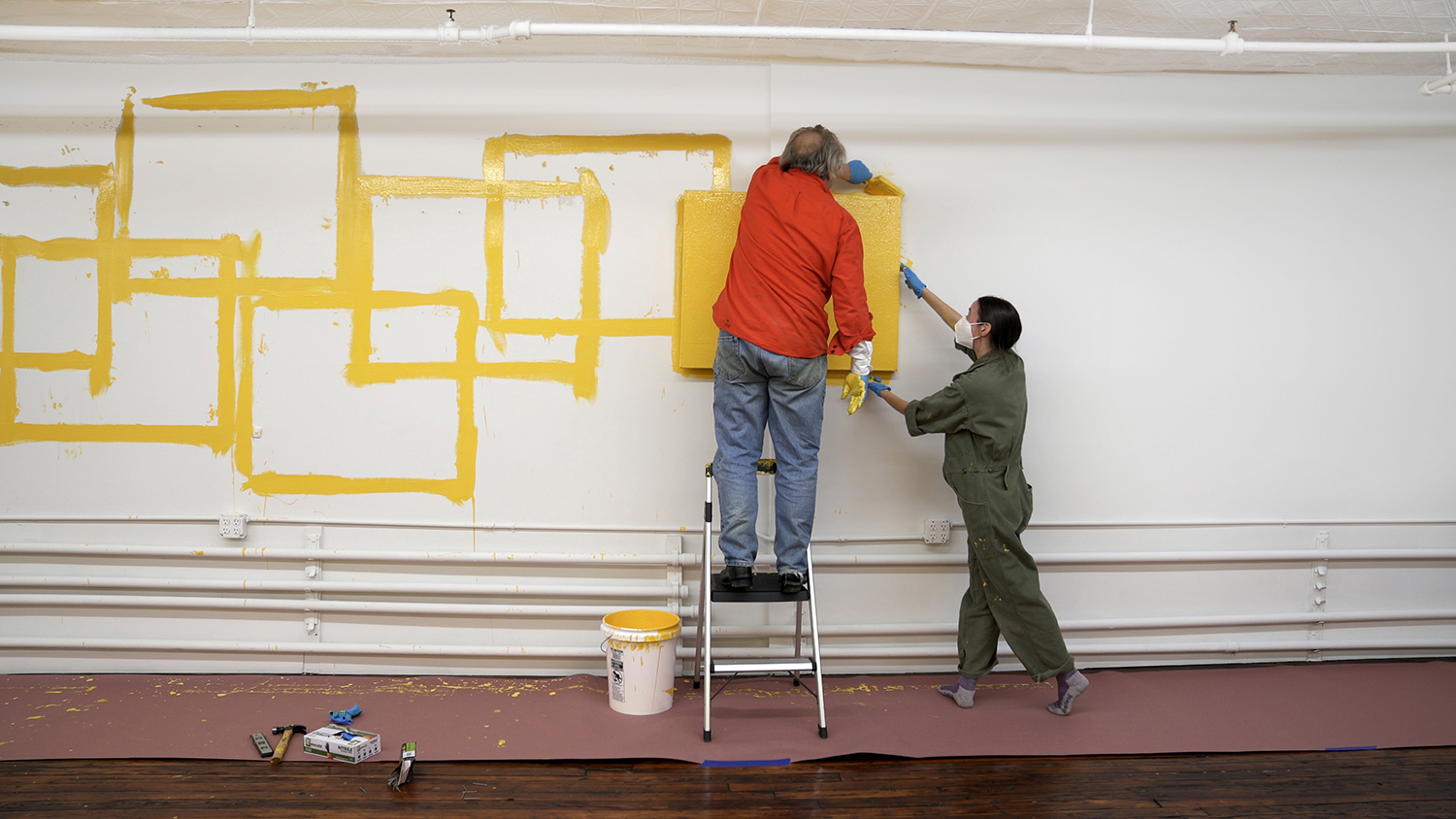 A behind the scenes shot of the exhibition process. Photo: Photograph by Guillaume Ziccarelli. Courtesy of the artists and Off Paradise.

Mindful of the 43-year gap between Rutault’s conception of the artwork and its execution, Nadin painted a canvas in a lemon-yellow color 42 times on the white walls and floor opposite the yellow wall that would hold the final painting. Expressively outlining the canvas with a wide brush each time he painted it, he produced 42 ghost paintings on the walls, floor and an emergency exit door of the gallery before painting it one more time—according to the instructions, which are visually displayed—in the place that it will remain throughout the show.

Installation view of Claude Rutault, A Proposal to Peter Nadin, 1979; realized 2022 at Off Paradise. Photo: Photograph by Guillaume Ziccarelli. Courtesy of the artists and Off Paradise.

Curiously, the ghost paintings leave a trail back to the TriBeCa neighborhood that initially inspired the piece, and where Off Paradise now happens to be. Other parallels haunt the show as well, such as Rutault having other people construct his work and Nadin and D’Arcangelo considering the construction work that they were doing for a living at the time as their artwork. They even saw the construction of the exhibition space at 84 West Broadway as the art in the inaugural show, which was ironically titled “30 days work.” 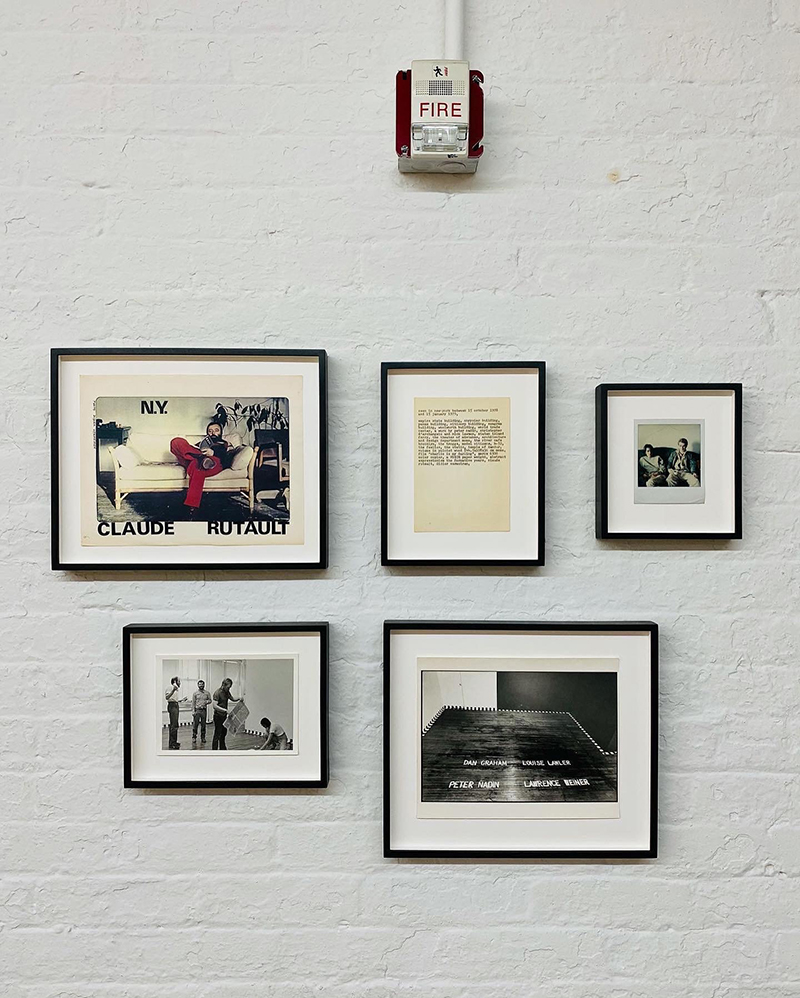 Installation view of archive materials at Off Paradise. Photo: Photograph by Randy Kennedy

Pieces of ephemera add context to the Off Paradise show, including a 1978 portrait of Rutault in New York; notes on what he saw in New York that he printed as a post card and distributed as a lecture when he returned to Paris; a section of the wall that artist Sean Scully painted for his show; and photos from the final exhibition.

After it closed, Nadin continued to let friends use the space to make their work and present an occasional show or performance event. Returning to painting in 1982, he took a postmodernist approach to the medium, creating a cross between a still life and landscape using bold painterly brushwork—not too distant from the way he painted the artwork for Rutault. 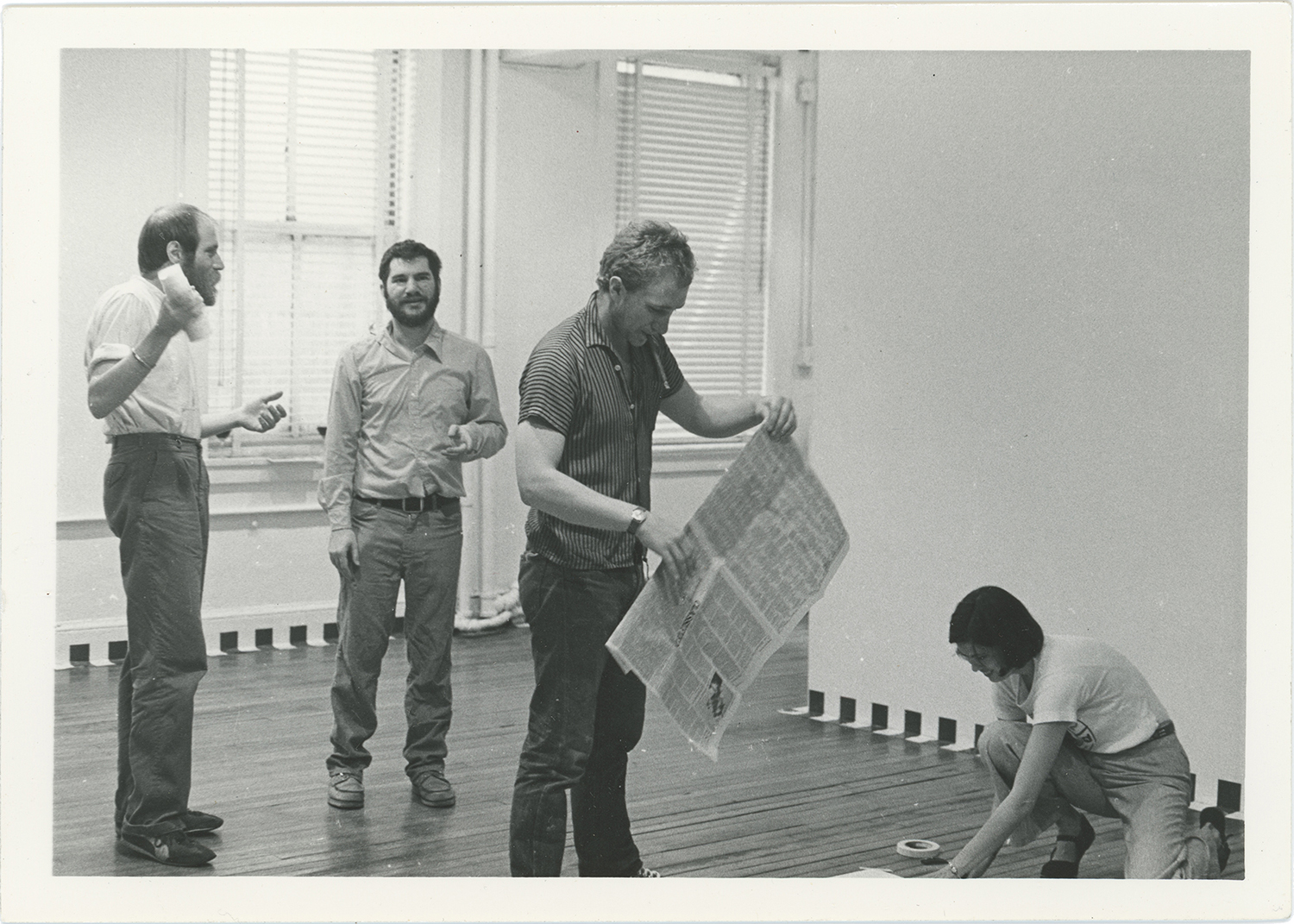 And like the way in which 84 West Broadway functioned, with one show building off the next, Nadin’s paintings of lemon trees growing in a greenhouse on his farm in the Catskills will follow Rutault’s show at Off Paradise in March. The lemon-yellow will still be present, but it will be visible in a completely different form.

Cover: Installation view of Claude Rutault, A Proposal to Peter Nadin, 1979; realized 2022 at Off Paradise.
Photo: Photograph by Guillaume Ziccarelli. Courtesy of the artists and Off Paradise.
Next Post