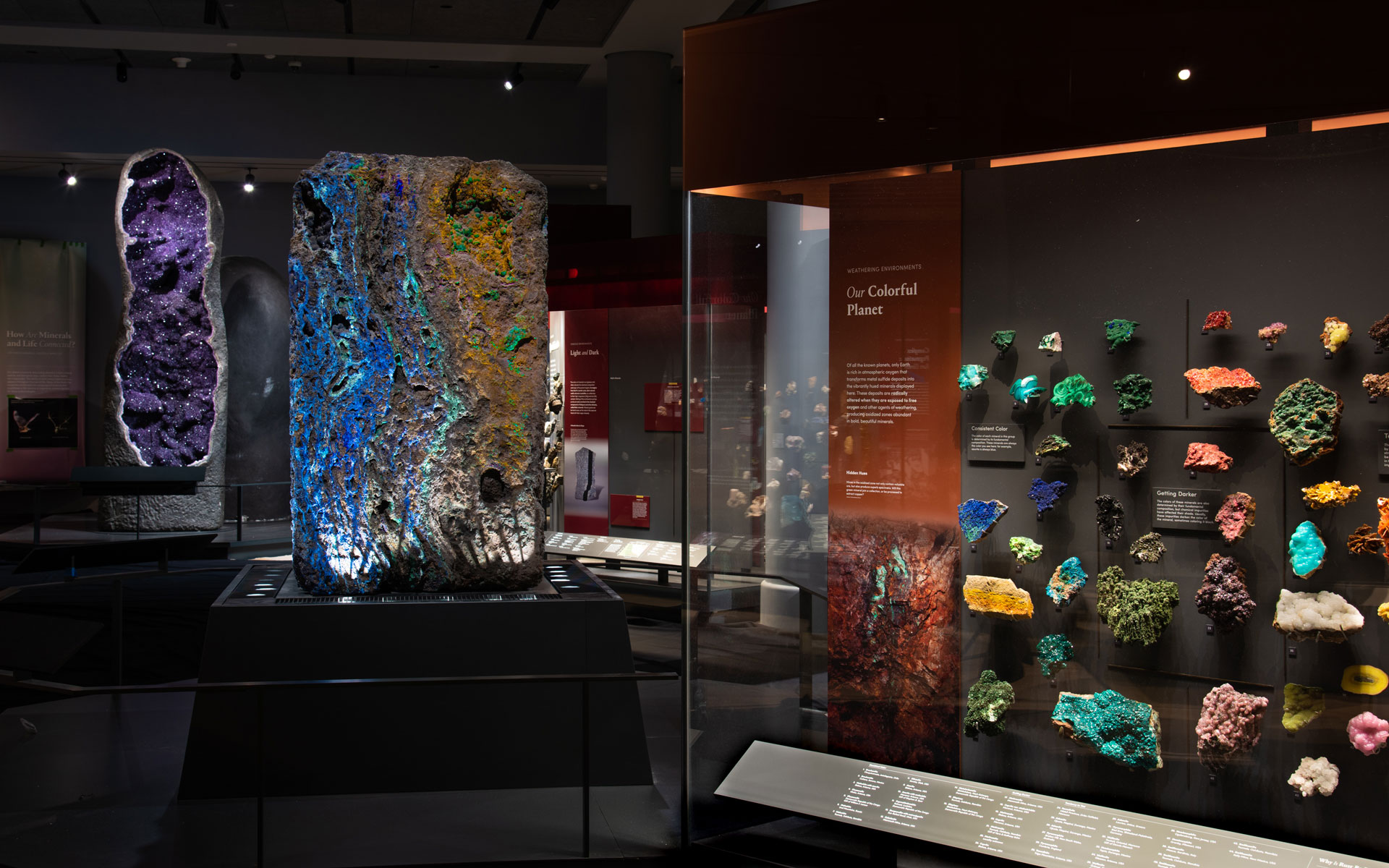 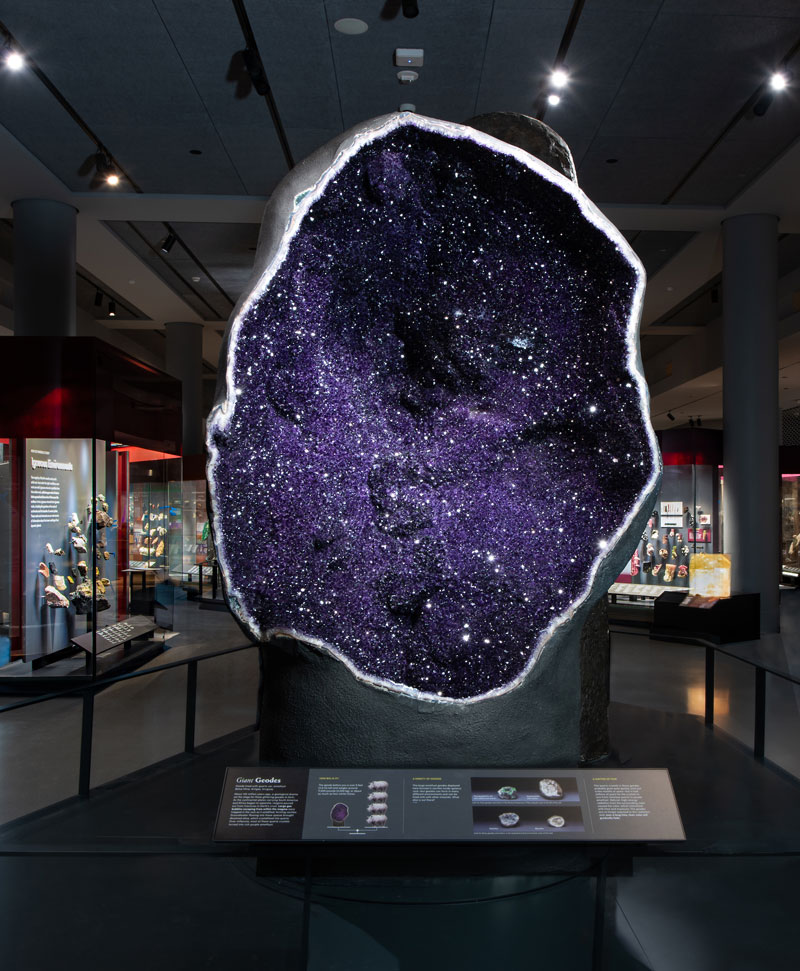 When the revamped Allison and Roberto Mignone Halls of Gems and Minerals open at New York’s American Museum of Natural History on June 12, visitors will once again be able to marvel at their world-renowned treasures, among them the 563-carat Star of India, one of the world’s largest gem-quality sapphires, and the Subway Garnet, the most famous mineral specimen discovered in Manhattan. The Upper West Side institution’s beloved Halls were closed for renovations in 2017 and were originally slated to reopen last fall, but they were delayed due to the pandemic.

The gem and mineral collection, which is one of the finest in the world, began as far back as 1869. In 1922, the J. Pierpont Morgan Memorial Hall of Minerals and Gems officially opened as the primary display and storage area on the fourth floor. By 1976, the Harry Frank Guggenheim Hall of Minerals and Morgan Memorial Hall of Gems debuted on the museum’s first floor, and the space had never been updated since.

Like a time capsule from the 1970s, the former design was meant to simulate the interior of the Earth—complete with dim lighting and brown shaggy carpet—and had become part of the museum’s nostalgic charm. But the new renovation, with its airy halls, modernized vitrines, and technological enhancements, far better serves the incredible array of gems on offer. 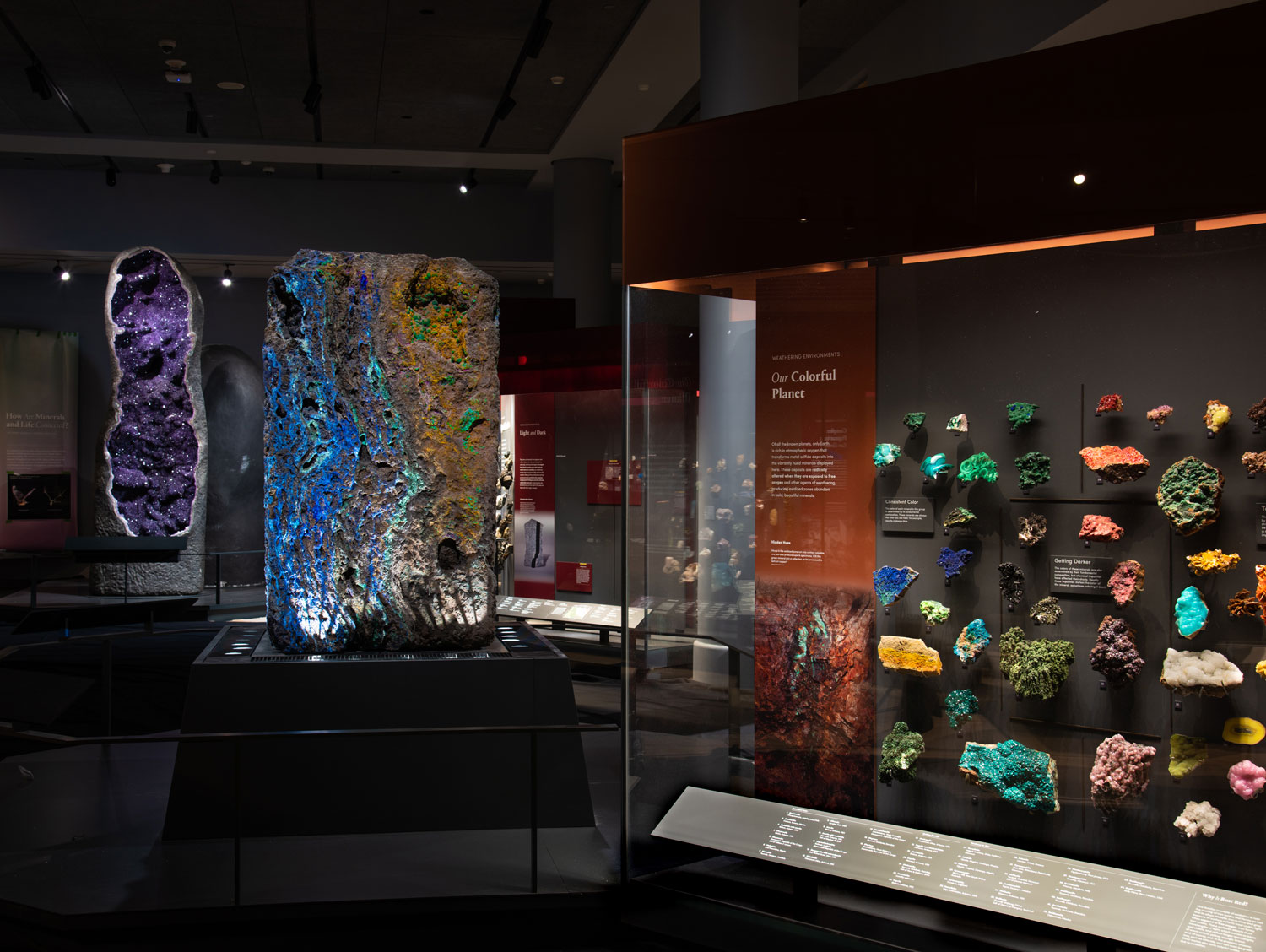 “We thought about refurbishing the space,” says George E. Harlow, who has been a curator at the museum for over 40 years. “But we really wanted to rebuild it and we were presented with the opportunity. The science isn’t exactly dated but it wasn’t presented as well as it could be.”

From June 12, visitors will be greeted by a striking 9,000-pound amethyst geode, which features quartz that was formed some 135 million years ago. Harlow recently acquired the towering form from a gem dealer on Long Island, hoping to set the tone of the new space and also provide context around what a mineral would look like in its natural setting. “We wanted to talk about the environment of minerals and how they relate to the Earth. The connection between minerals and life is key. All bodies and organisms are a result of the chemicals from the minerals.” 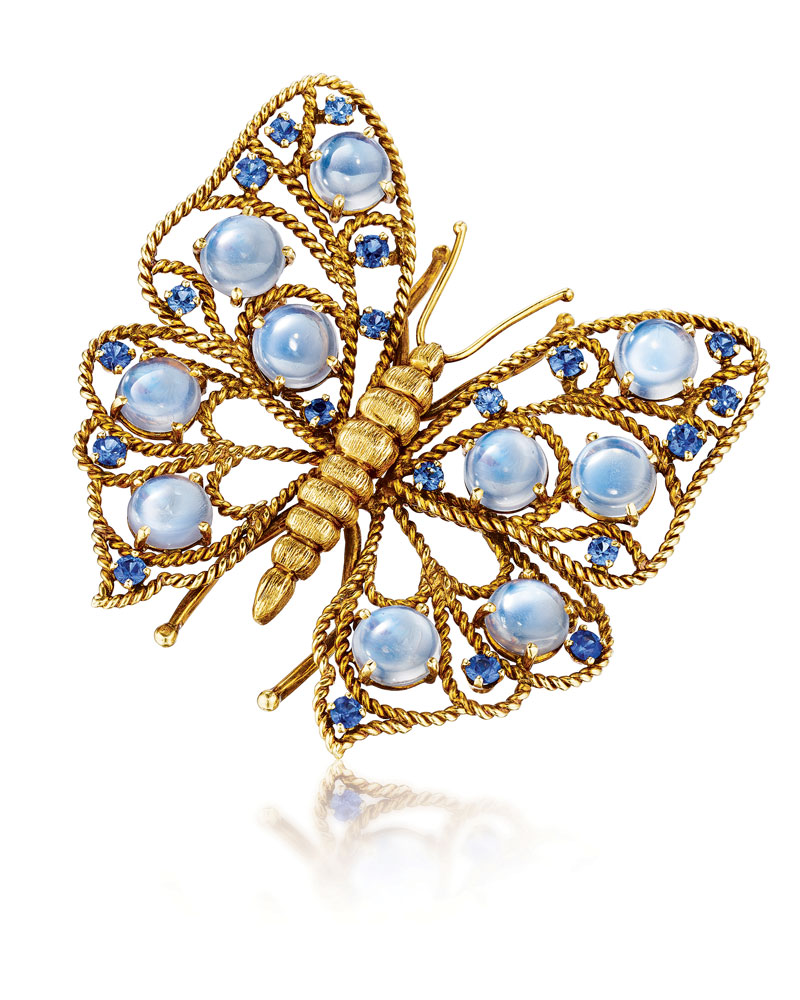 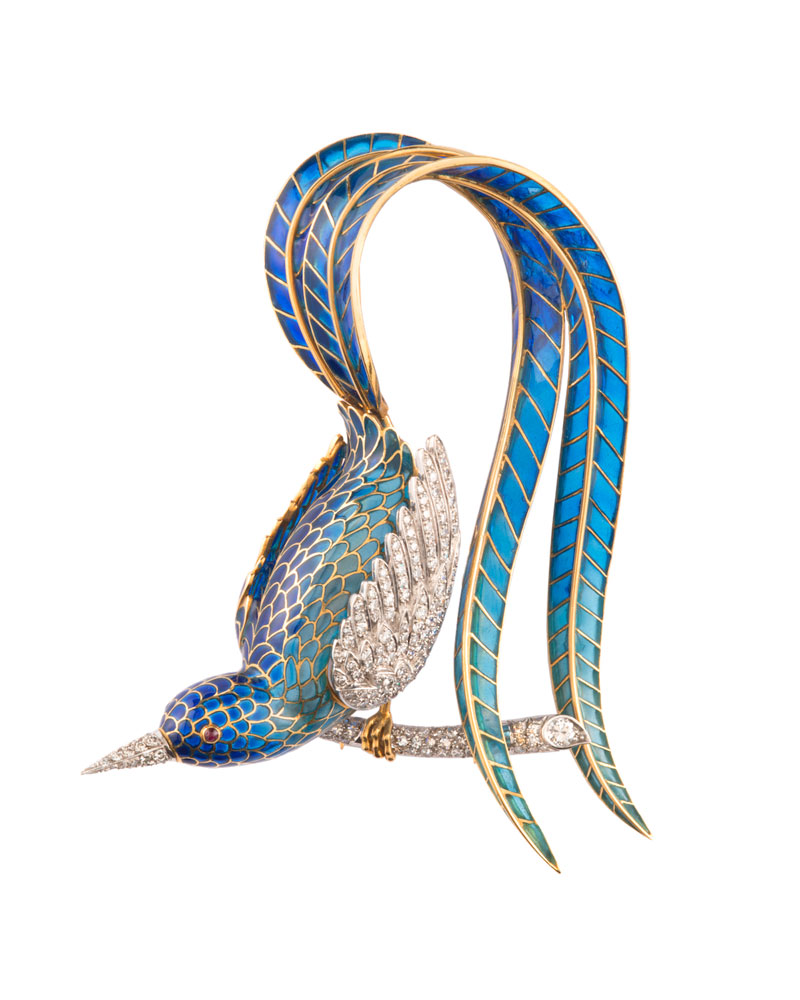 Five-thousand mesmerizing specimens are sprinkled throughout the space, arranged in a way that charts this evolution. One highlight with a fascinating backstory is the Singing Stone, which has been in the collection since 1895. With its combination of bright blue azurite and green malachite, two copper ore minerals, it was originally dug up in at the Bisbee, Arizona mine and was part of the 1893 World’s Fair in Chicago. In the former space, when the humidity levels changed, a high pitched sound would be set off. (The new temperature regulated environment means better preservation but sadly no more singing.) There is also a beautiful fossilized tree that lived 35–33 million years ago.

The collection of dazzling cut and polished gemstones‚ spanning everything from lapis lazuli and turquoise to emeralds and diamonds, are sure to remain a big draw for the museum, but one of Harlow’s goals is to provide some scientific context around how such beautiful gems are formed. “The idea is to show what makes gems so attractive,” he tells Galerie. 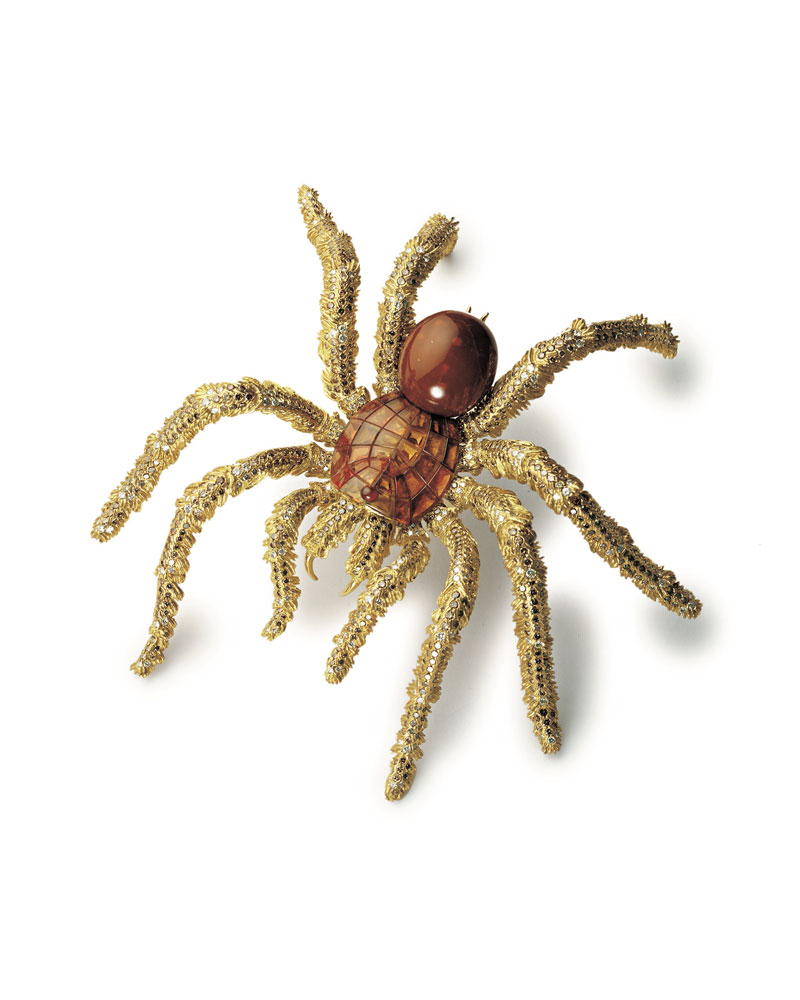 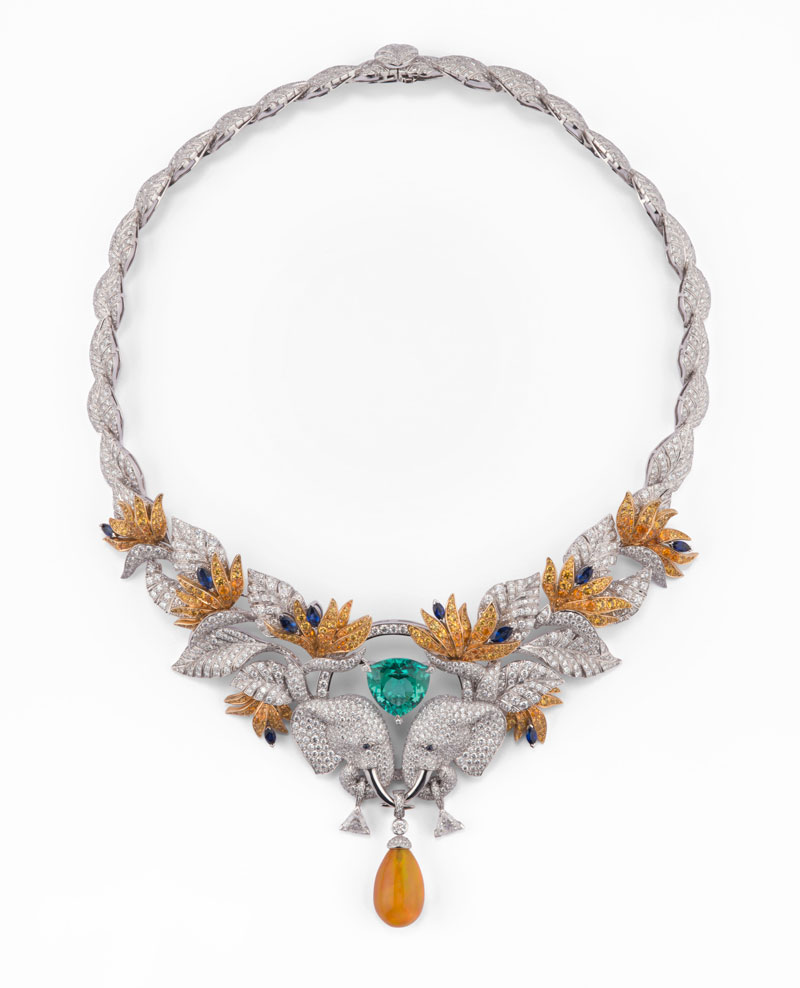 To round out the experience, the museum has installed a special gallery in its permanent hall of gems for the first time. The inaugural show, “Beautiful Creatures,” is a meticulously researched exhibition on jewelry inspired by the animal kingdom and was curated by the jewelry historian Marion Fasel. “I am just so glad it was able to open at all,” says Fasel, who worked on the show for around three years and sourced rare pieces from legendary houses Van Cleef & Arpels, Cartier, Tiffany & Co., David Webb, and Boucheron, as well as private collectors.

Highlights include a striking Cartier crocodile necklace acquired by actress Maria Felix in the 1975, a small lion brooch once owned by Brooke Astor, and a magnificent display of gem-encrusted butterflies that seem as though they could flutter straight out of the case. “The theme of beautiful creatures is a tribute to the museum,” explains Fasel. “All the jewels were created in the last 150 years, in celebration of the museum’s 150th anniversary, and the animals can all be found in the museum. Grouped together, there is a sense of joy, wonder, and delight.”