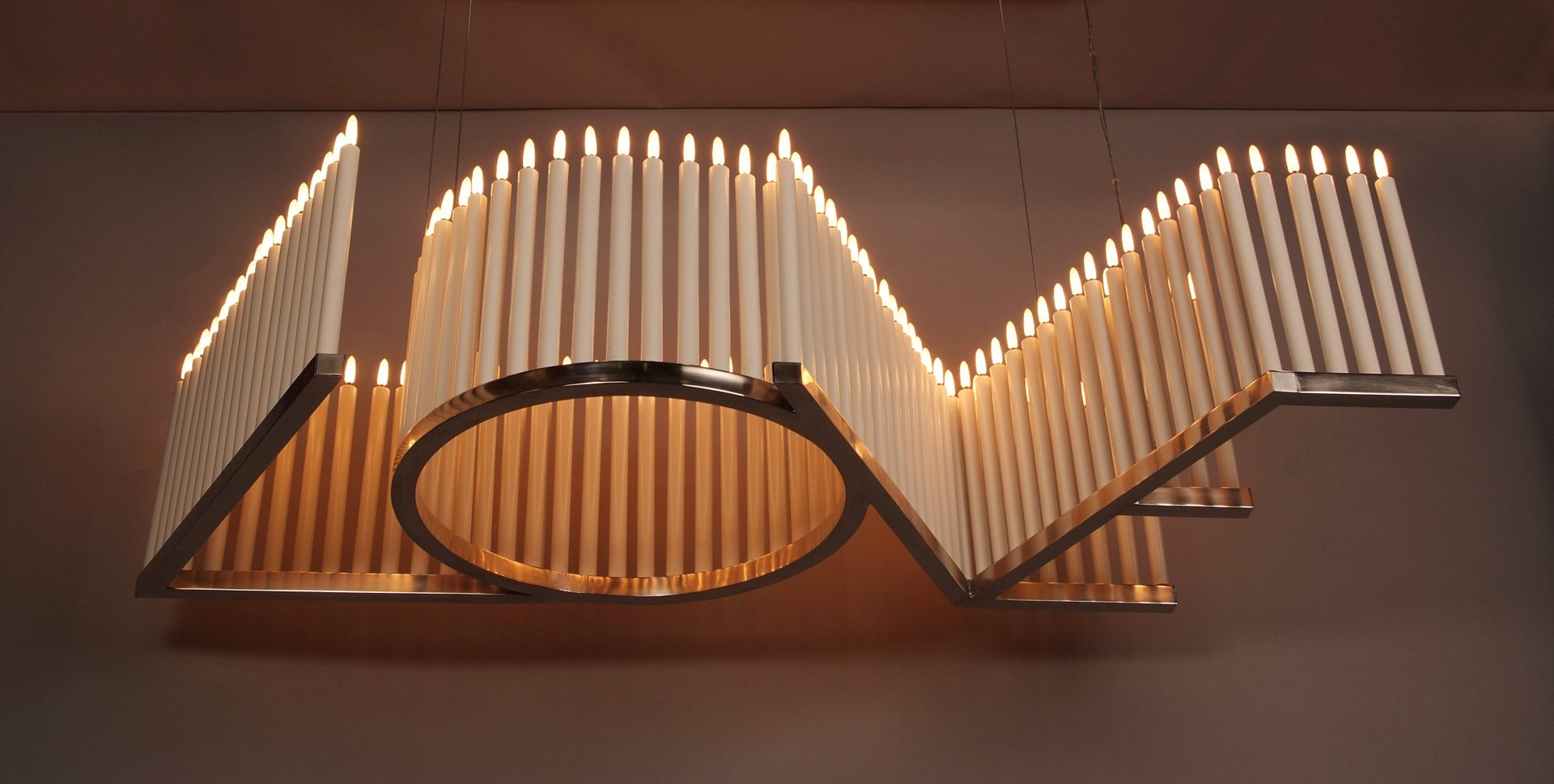 The chandelier LOVE, of nickel-plated bronze, includes over 100 of Mathieu’s specially patented LED light bulbs that perfectly reproduce the color and halo of a flame.

Between grand restorations for Versailles and pioneering designs for Chanel, French-based Regis Mathieu is redefining what a chandelier can be Mathieu stands in his atelier in Gargas, France, with Cube, a limited-edition hanging fixture made of rock crystal and amethyst.

French artisan, entrepreneur, designer, and collector Régis Mathieu is your go-to guy when it comes to lighting—particularly chandeliers. After taking over Mathieu Lustrerie—the family business—in 1992, Mathieu has established himself as not only an innovative and whimsical lighting designer, but as one of the world’s leading authorities on the restoration of chandeliers.

The atelier is nestled in the quaint village of Gargas in southeastern France—in an old pigment factory. Restorations, reproductions of antique designs, and contemporary creations are the three main departments of the company. Some of Mathieu’s most notable chandelier restoration projects include the Louvre Museum, the Opéra National de Paris, the Palace of Versailles, the Palazzo Farnese in Rome, Italy, and the Academy of Music in Philadelphia, Pennsylvania.

Reminiscent of a waterfall, the appropriately named Niagara Falls is made up of strings of crystal beads draped over a lit plexiglass frame. Photo: Courtesy of Mathieu Lustrerie The Monolithe is part of the Odyssee collection that includes designs titled Saturn, Orbit, Atmosquare, and Constellation. Photo: Courtesy of Mathieu Lustrerie

Contemporary creations are equally luxurious but much simpler—with clean lines and bold geometric shapes—using such elements as amethyst, bronze, gold, rock crystal, silver, and semiprecious gems. Mathieu’s designs showcase his understanding of modernity too. The pieces’ remarkable sizes give them a formidable presence in any room they inhabit.

Cover: The chandelier LOVE, of nickel-plated bronze, includes over 100 of Mathieu’s specially patented LED light bulbs that perfectly reproduce the color and halo of a flame.
Next Post