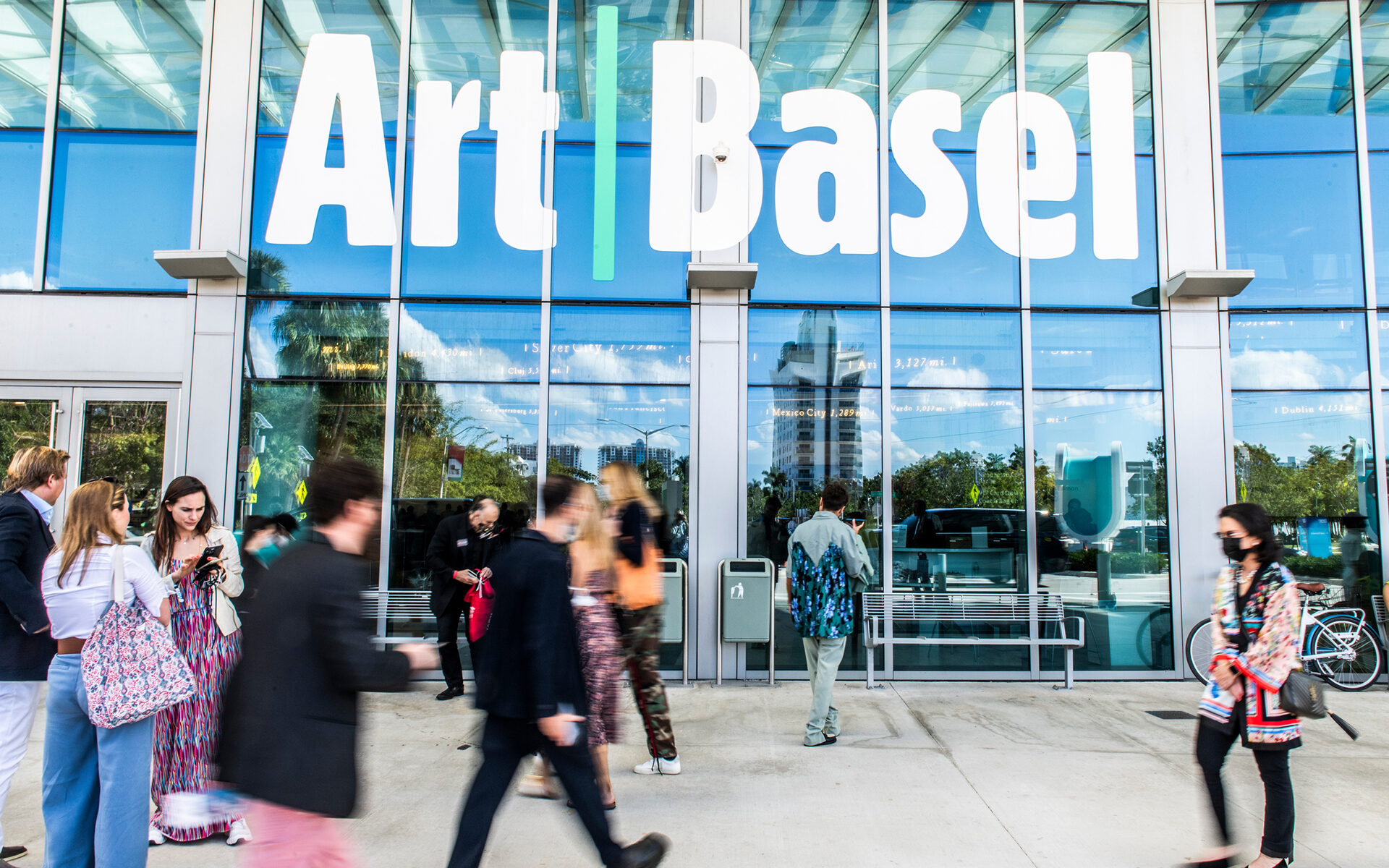 The first in-person edition of the fair in Miami, which remains open until December 4, impresses with scale, sales, and attendance

The typical jadedness among the art world crowd about attending yet another art fair was nowhere to be seen in the first day of Art Basel Miami Beach on November 30. Instead, an excitement to return to the sun-soaked city for the biggest art week in the United States was visible even behind the masks during the vernissage. Different hugs of choice, marathons between the aisles, and smartphones raised in front of the top-notch art have brought back the long-missed fair rituals. 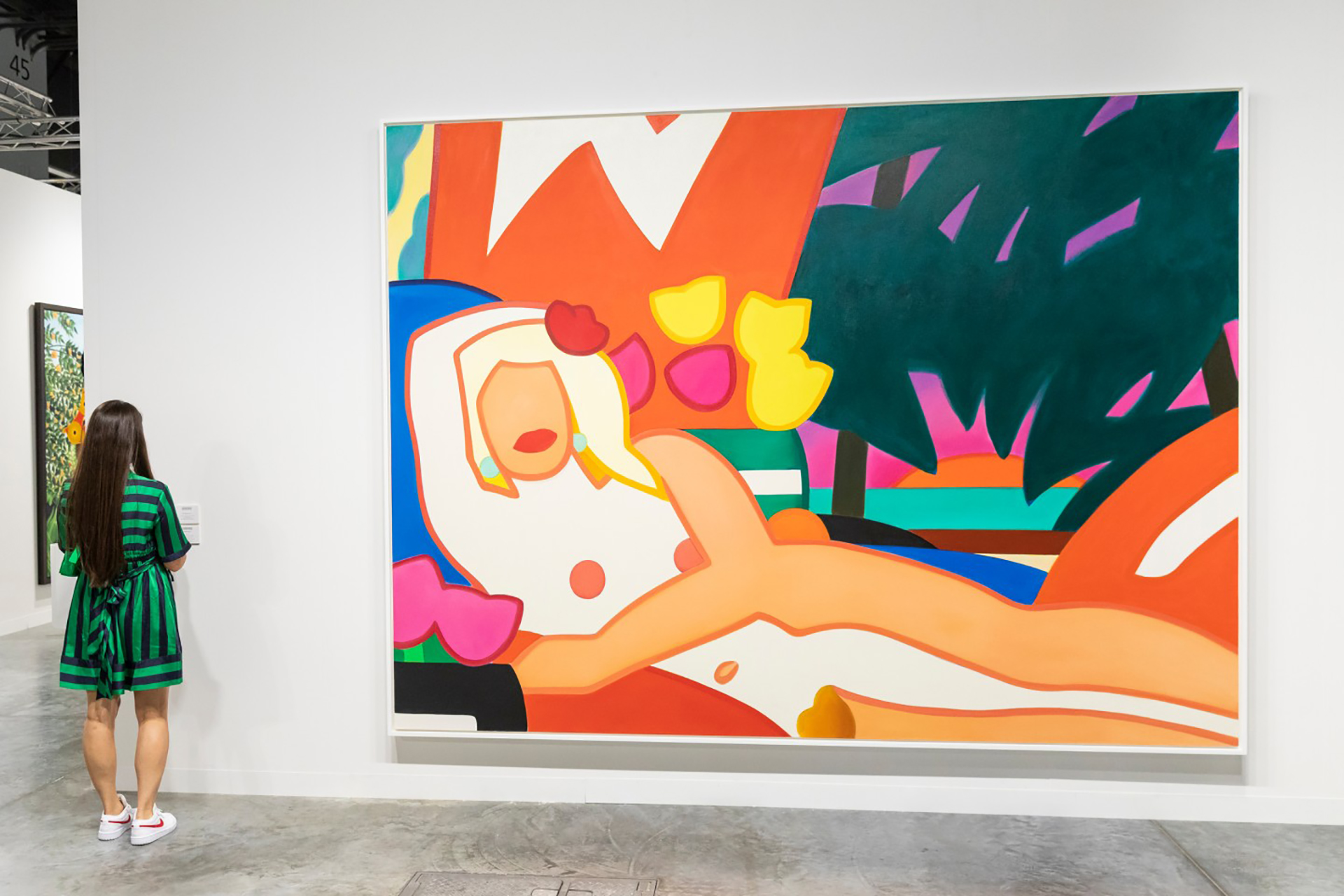 With its endless summer and laid-back attitude, Miami is rarely a hard sell, but the fair’s promise of the crème de la crème of contemporary art is its true attraction for thousands of attendees. The mammoth affair’s first in-person iteration since 2019 exceeds expectations in scale and ambition—253 galleries shipped their most prized pieces from all over the globe to the booths lined inside the Convention Center’s soaring interior. The removal of travel restriction for the Europeans eased many galleries’ efforts to participate in the fair as well as adding the event to many foreign collectors’ agendas. 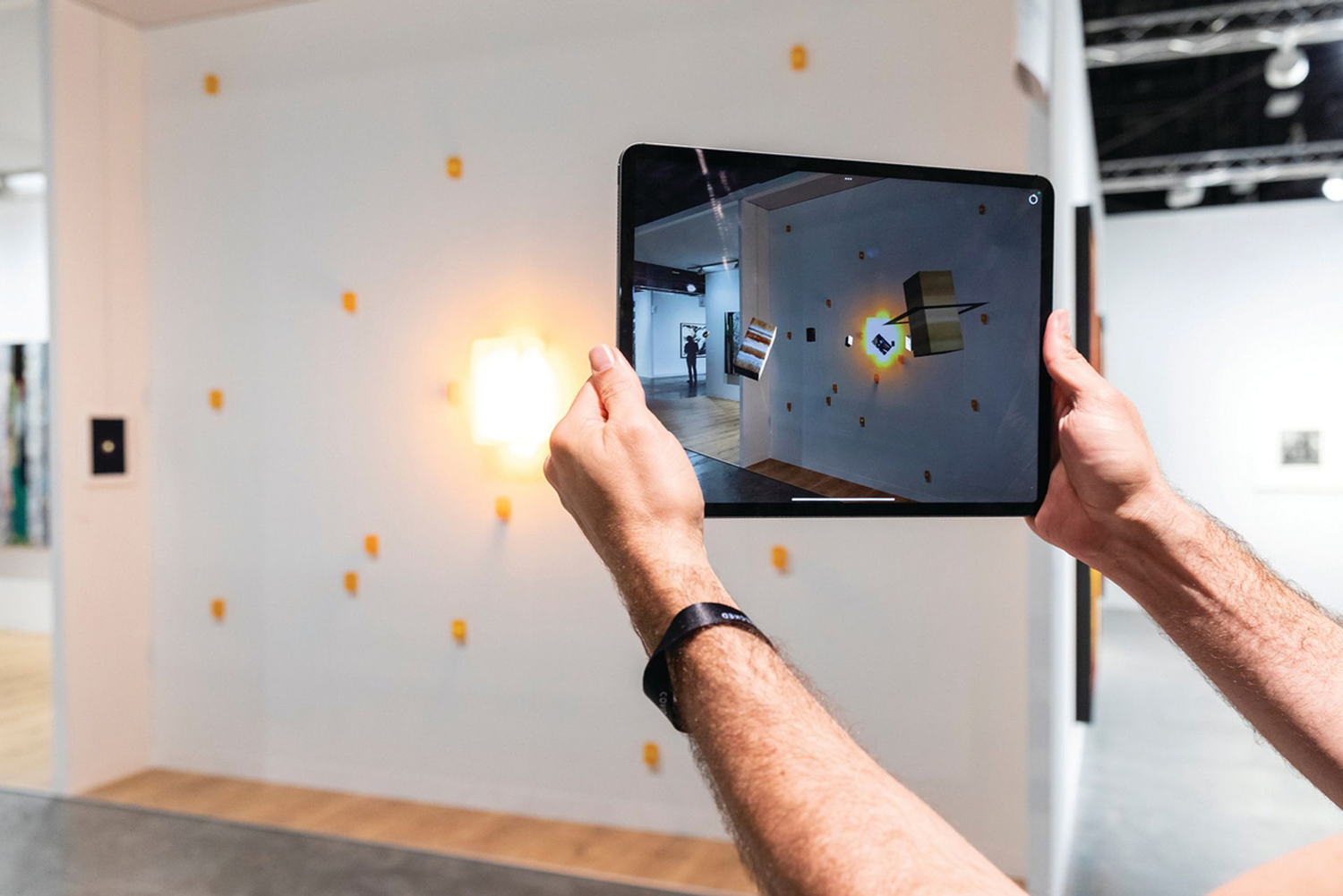 Between the flowing champagne and chats about what parties to attend, the art on view ranges from historic pieces to the newest works fresh from artist studios. In addition to the usual suspects, an impressive 43 galleries made their Art Basel Miami Beach debut, including several emerging galleries from the U.S. and abroad. Unsurprisingly, NFTs occupied the interests and curiosities of many as the new collecting frenzy made its Art Basel Miami Beach debut. Pace Gallery collaborated with DRIFT for an NFT work inspired by the Dutch duo’s augmented reality series, Block Universe (2021) about the solar system. DRIFT’s interpretation of NFT both as a technological challenge and a new form of visual language is the next step in their boundary-pushing approach to art and technology—currently proven by their hypnotizing exhibition “Fragile Future” at The Shed. 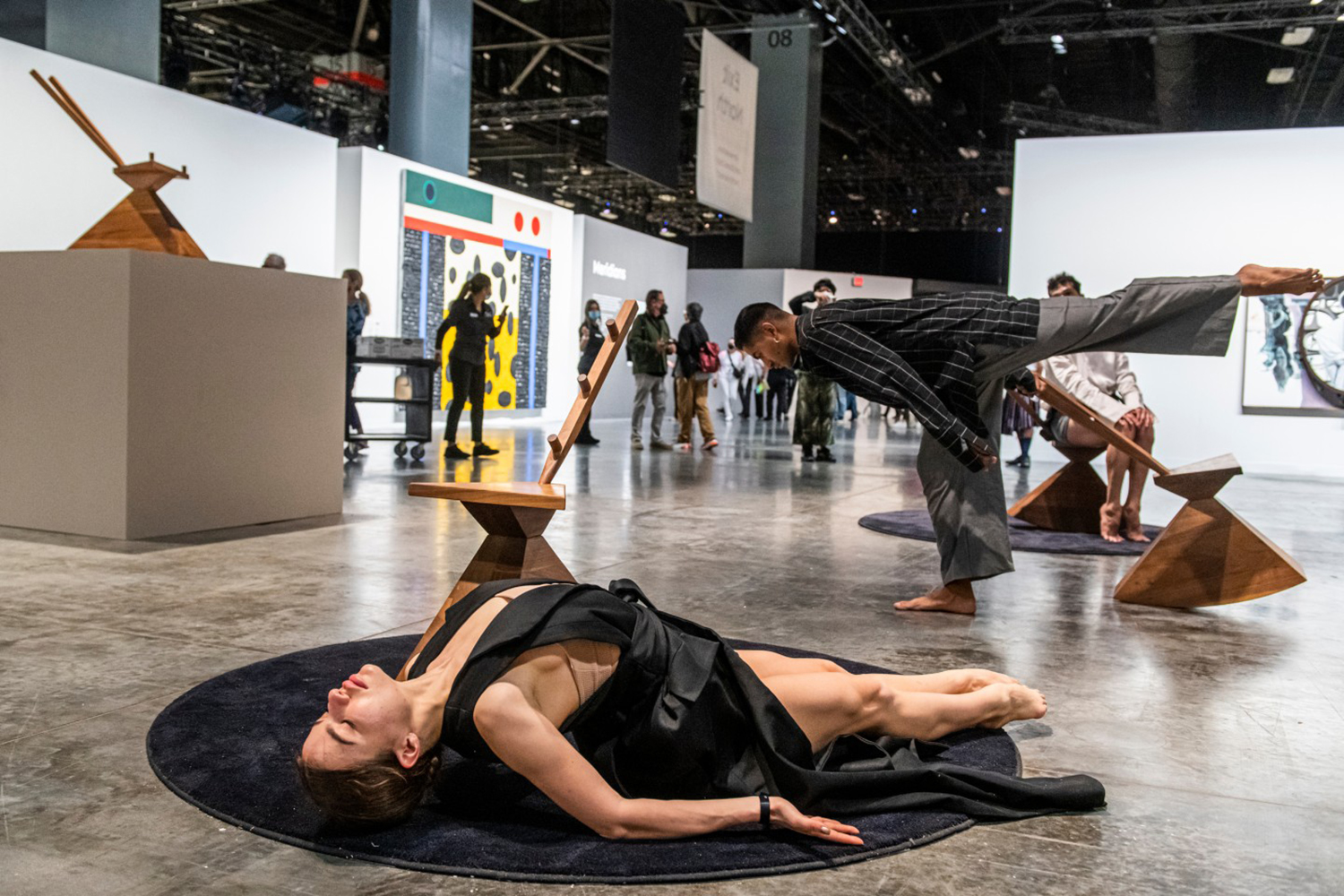 The most hyped section in the last iteration was Meridians, which is dedicated to large-scale works. Curated by Museo Tamayo director Magalí Arriola, this year’s presentation occupies a spacious corner with individual works by 25 artists. Chicago-based gallery Monique Meloche exhibits Brendan Fernandes’s large-scale kinetic sculptures, a series of six “body-devices” commissioned for his exhibition, “Contract and Release,” 2019 at The Noguchi Museum, Long Island City. Inspired by the collaboration between Martha Graham and Isamu Noguchi, who designed and created props for the modern dancer’s choreographed scores, the artist’s sculptures were activated by dancers. Engaging with the works’ smooth surfaces, performers slowly formed their bodies in response to the sculptures in front of an intrigued crowd. 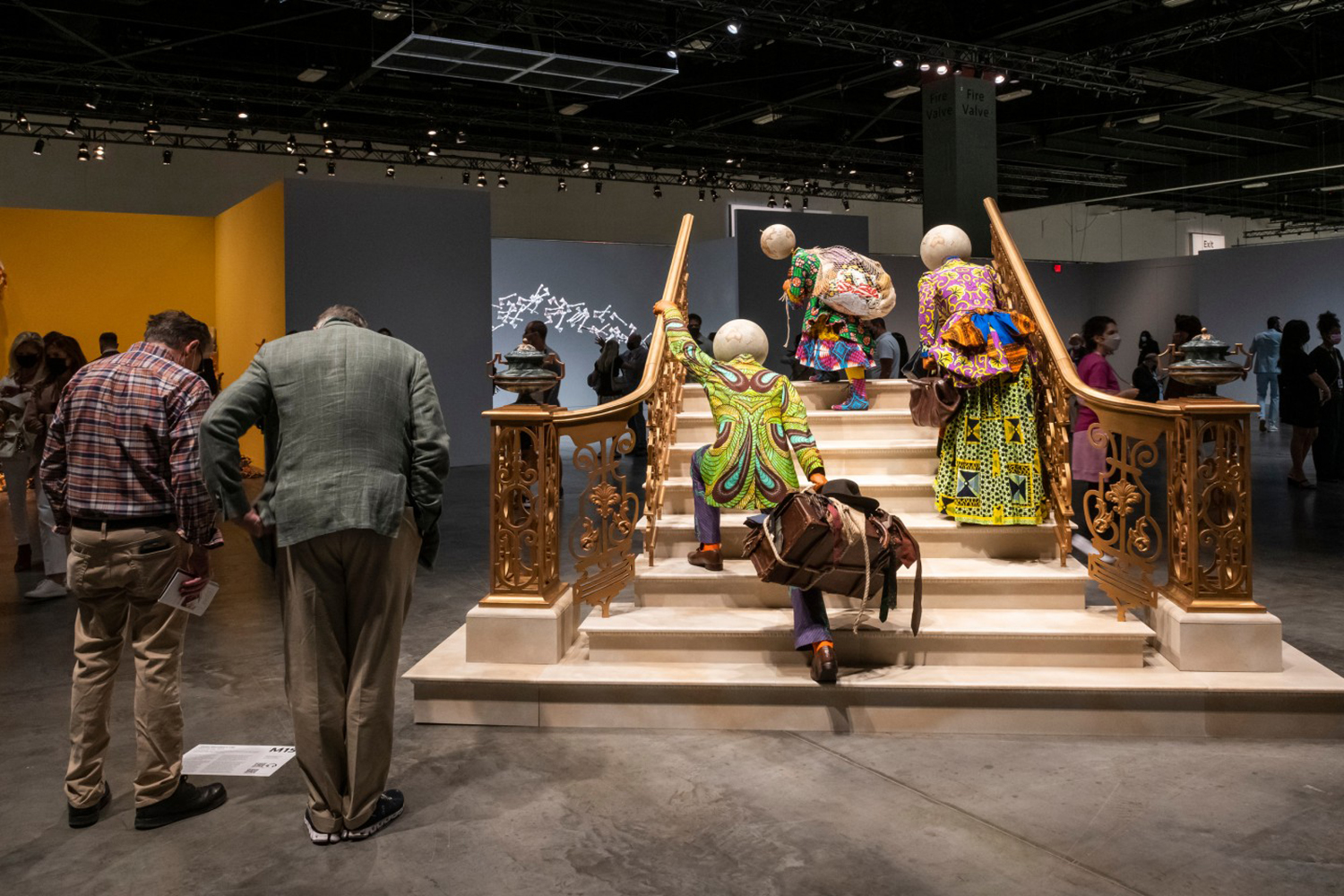 Yinka Shonibare’s masterful sculpture of the Great Migration with James Cohan sits amidst large scale wall-hung pieces by Howardena Pindel, Sadie Laska, and Todd Gray. The scene-stealer sculpture embodies the drift of six million Black Americans from the south to other parts of the country. The Brit swathed three figures in his signature Dutch wax fabric, creating a sensation of hope and anticipation through color and pattern. 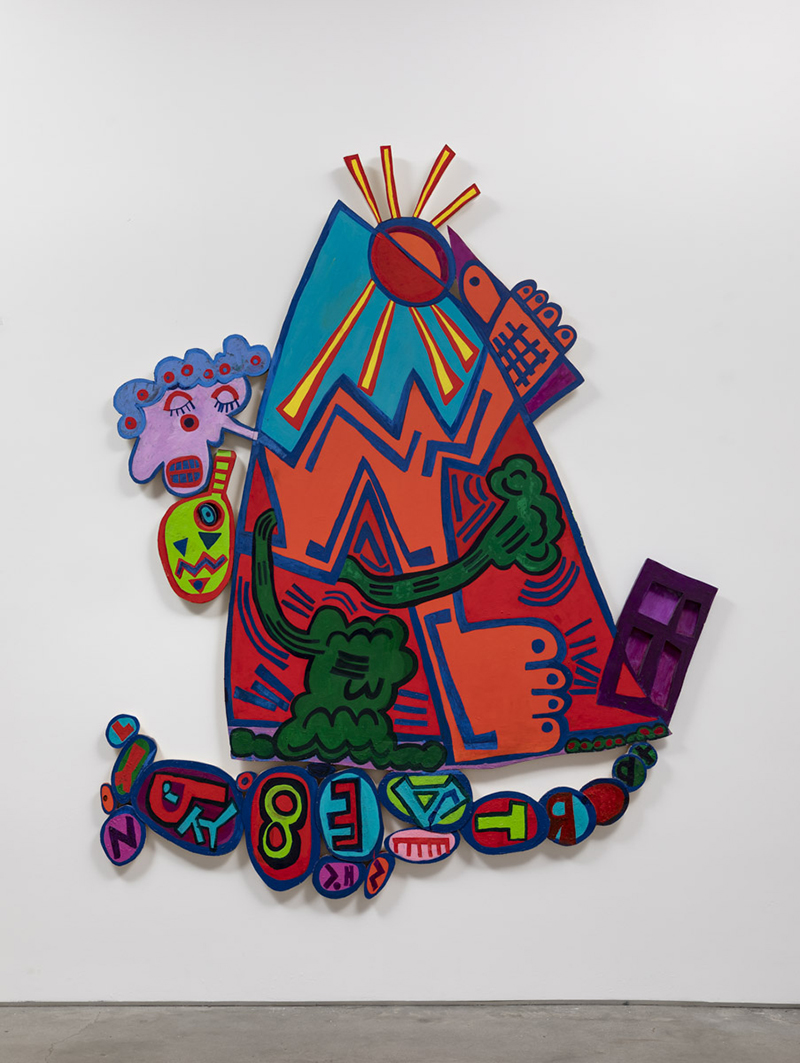 Across the booths, artworks compete with Meridians in scale. Parisian gallery Templon delivers an interesting outlook of America with a large-scale painting by Kehinde Wiley, George Segal’s dark-blue sculpture of a life-size human figure, and Michael Ray Charles’s two paintings that make sharp commentaries about the history of race in the United States. Another Parisian powerhouse, Perrotin’s booth bursts with a who’s who offering, including Eroded Porsche 911 (2021), Daniel Arsham’s life-size car sculpture treated with the artist’s signature crystallized erosion, which sold to a local Miami collector for just over $500,000.

David Lewis Gallery also reserved a portion of its booth to the power of femininity with Mary Beth Edelson’s Kali Bobbitt (1994), a captivating sculpture of a woman dressed in lingerie and sharp objects. The late artist’s transformation of a storefront mannequin into a six-armed fighter who carries her weapons around her lace underwear is a showstopper. Another iconic female artist is Elizabeth Murray, whose energetic painting, titled The New World (2006) is showcased at  Gladstone Gallery. Building on the gallery’s current solo exhibition for the late painter, the work challenges form and narrative with Murray’s architectural take on the canvas—a potpourri of visual traits that dare to be whimsical and even humorous. 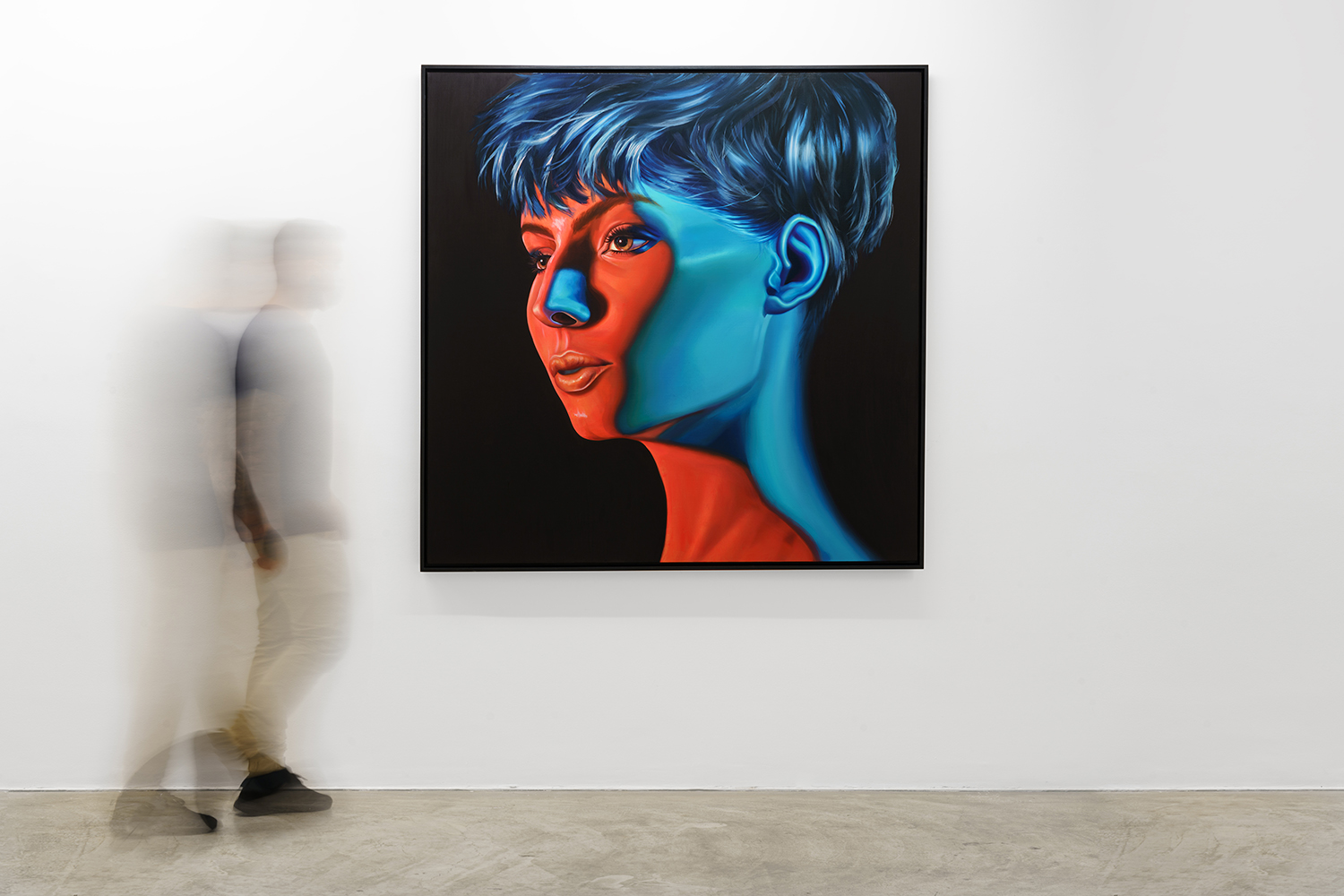 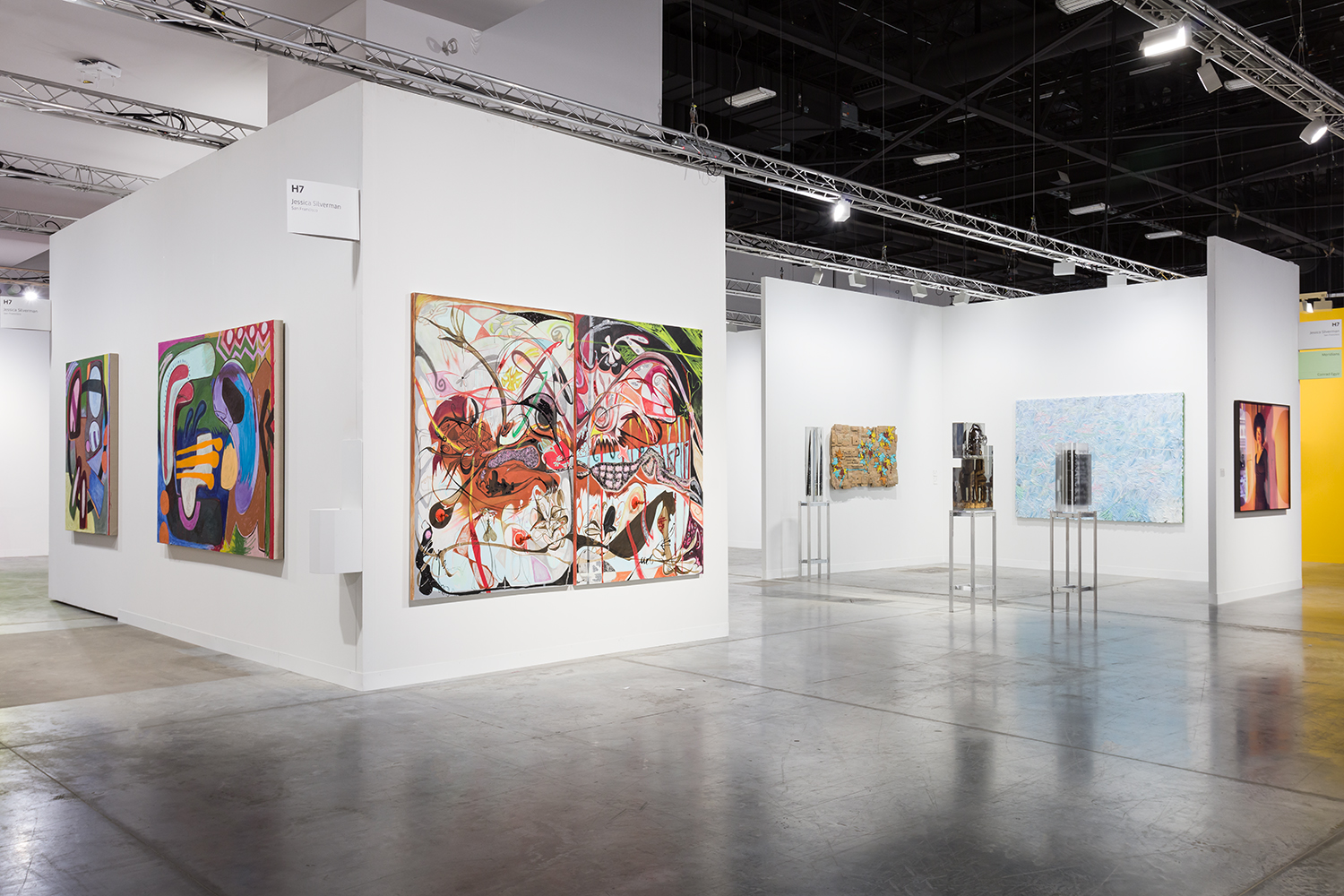 There are also modest-sized gems waiting to be discovered. Take, for example, San Francisco’s Jessica Silverman which features an intimate painting by the West Coast artist Clare Rojas amidst works by Woody De Othello, Rashaad Newsome, and Matthew Angelo Harrison. Rojas’s detailed depiction of a surreal scene in which a man walks his dog while the canine’s leash is wrapped around a woman intrigues with its dreamlike moment and the artist’s detailed effort over the canvas.

From concerts by Alicia Keys or Troye Sivan to panels about future of the art market, Art Basel Miami Beach is once again a feast for the eye and the mind. Given the general appetite for in-person interactions, the fair and the ample calendar throughout the week proves the art world’s indelible social aspect which thrives on the human connection as much as the art on display.