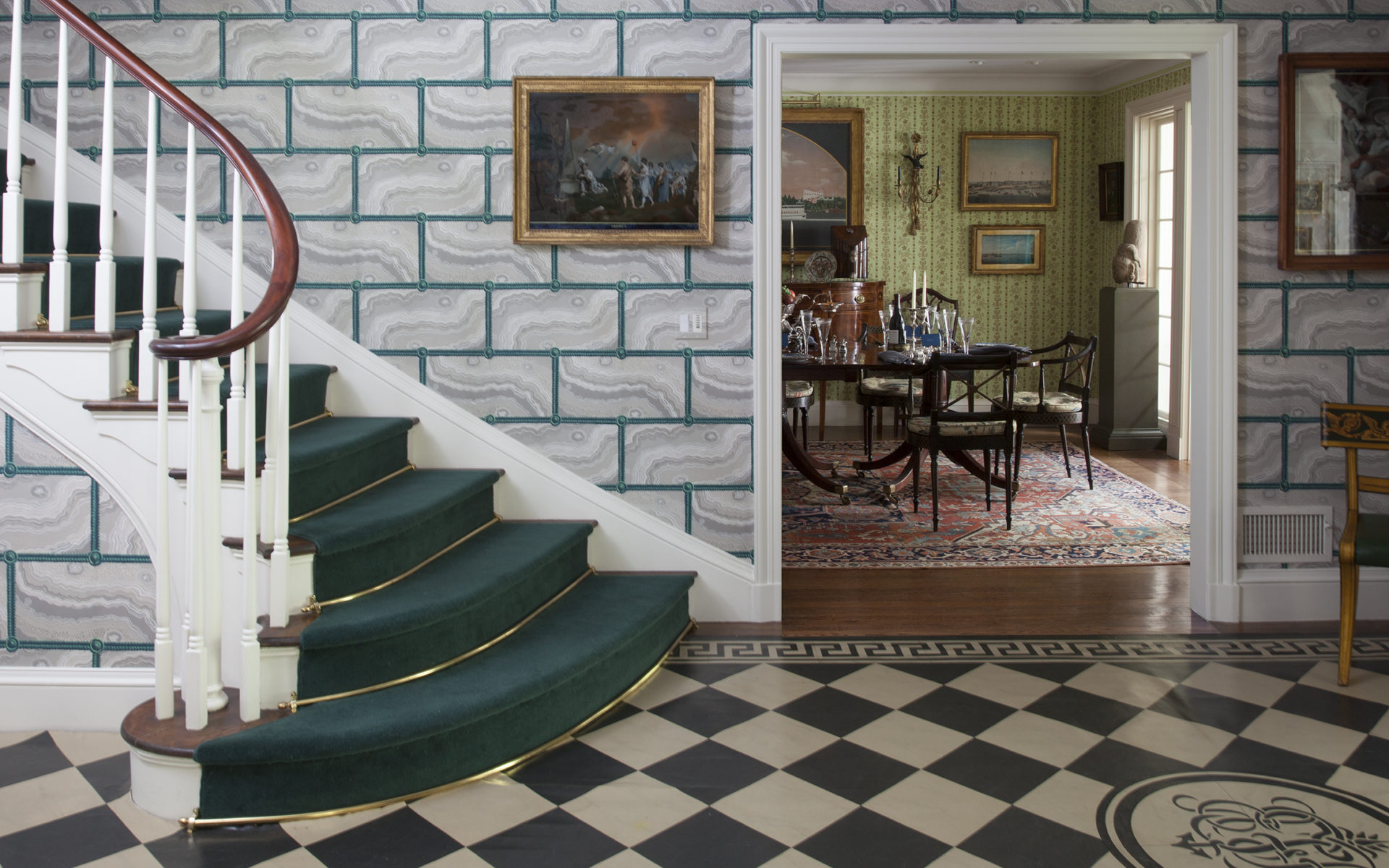 For the stair hall of a house in Westchester, Thomas Jayne opted for a high-impact historic paper reproduced by Adelphi Paper Hangings.
Photo: The Monacelli Press For a new book on decorating, interior designer and decorative arts historian Thomas Jayne took on a nearly insurmountable challenge: updating the classic 1897 book The Decoration of Houses by Edith Wharton and Ogden Codman, Jr. Fully aware of the magnitude of the task at hand, Jayne admits of the original, “It’s not an overstatement to say it’s the most important decorating book ever written.”

When the book was originally released, Wharton had yet to publish any of her now-famous novels, such as The House of Mirth (1905), Ethan Frome (1911), and The Age of Innocence (1920). Her co-writer, Codman, was then just a fledgling architect. They had collaborated on her home in Newport, Rhode Island—but the book was long before his successes on the interiors of the Breakers in Newport, the Vanderbilt mansion in Hyde Park, and the east wing of the Metropolitan Club. Jayne explains that they originally wrote The Decoration of Houses as a reaction to the decline of architectural importance in the designing of houses and the rising fad for interiors being overwhelmed with decorative objects and schemes. They wanted to create a manual on creating classic beauty as opposed to the nouveau riche glitz of the Gilded Age, and presented readers with a practical guide for achieving simplicity, balance, and beauty in their homes.

As a designer practicing today, Jayne relies on historical models that have been honed over centuries as the basis for the contemporary homes he creates. “There are a lot of people that decorate out of intuition and not knowledge of historical principles and examples,” says Jayne. The dining room walls at England’s Crichel House have been restored to their 18th-century color scheme. Photo: The Monacelli Press

Over 100 years later, Classical Principles for Modern Design (The Monacelli Press, $50), co-authored with Ted Loos, asks which of the rules they set forth still apply and how can others be tweaked for modern living. Following the chapter organization of the original book, Jayne takes the reader through topics such as walls, doors, windows and curtains, and ceilings and floors, stressing how these fundamental rules are still important today.

Drawing on historical advice literature as inspiration, he says, “I’ve always liked old advice and etiquette books. There’s often some grain of truth even though it might seem ridiculous and out of date.” Here, Jayne shares some of the modern-day advice he offers in his book. “Their whole chapter about ceilings was an epiphany,” remarks Jayne. “I realized we hadn’t been decorating them because of all the mechanicals. But with recent developments in technology, you don’t have big A/C vents, down lights, and speakers ruining the ceiling. So, attention can be brought back above now that it isn’t loaded with holes.” This classical example shows the elaborate 18th-century ceiling decoration in the drawing room of Crichel House in Dorset, England, which Jayne restored to reflect James Wyatt’s original design. Photo: The Monacelli Press Like many designers, Jayne believes in the importance of natural light. For that reason, windows are one of the first elements he considers in a room. For this master bedroom in Oyster Bay, New York, Jayne redesigned the windows and enhanced an existing picture window with divided panes, which—according to Wharton and Codman—are important in adding architectural proportion to a room; they felt the divided pane made the outside landscape feel like part of a room’s design. Photo: The Monacelli Press “The bedroom is a great example of how decorating has changed,” says Jayne. “Bedrooms got fancy because they were used as salons and a place to receive guests.” Although such rooms are now private spaces, Jayne still considers the bed itself as an opportunity to make a decorating statement. Here, he dressed a bed with traditional hangings, which creates a sense of intimacy. He also makes a case for hanging a beautiful piece of art in the bedroom as a gift to yourself. Photo: The Monacelli Press Jayne does not always simply update the recommendations. Sometimes, he feels the way we inhabit our homes is so different that we can go against the original advice. For the stair hall of a house in Westchester, New York, Jayne opted for a high-impact historic paper reproduced by Adelphi Paper Hangings. The designer felt this is bold approach set up expectations for the rooms in the house beyond. With a commanding entrance, the hall becomes a design statement instead of a wasted space. In the original book, Wharton and Codman preferred a hallway to be neutral and almost disappear, and that stairs and halls should be kept separate. Photo: The Monacelli Press Trends with colors come and go more quickly than any other element of decorating. Wharton spent only about a page on the topic, since she and Codman believed good architecture did not require strong color. Jayne, on the other hand, views color as “the traditionalist’s weapon.” In the residence above, Jayne chose a vivid hue to enliven a classical library. Photo: The Monacelli Press

Classic Principles for Modern Design is available on January 13, 2018.

Cover: For the stair hall of a house in Westchester, Thomas Jayne opted for a high-impact historic paper reproduced by Adelphi Paper Hangings.
Photo: The Monacelli Press
Next Post