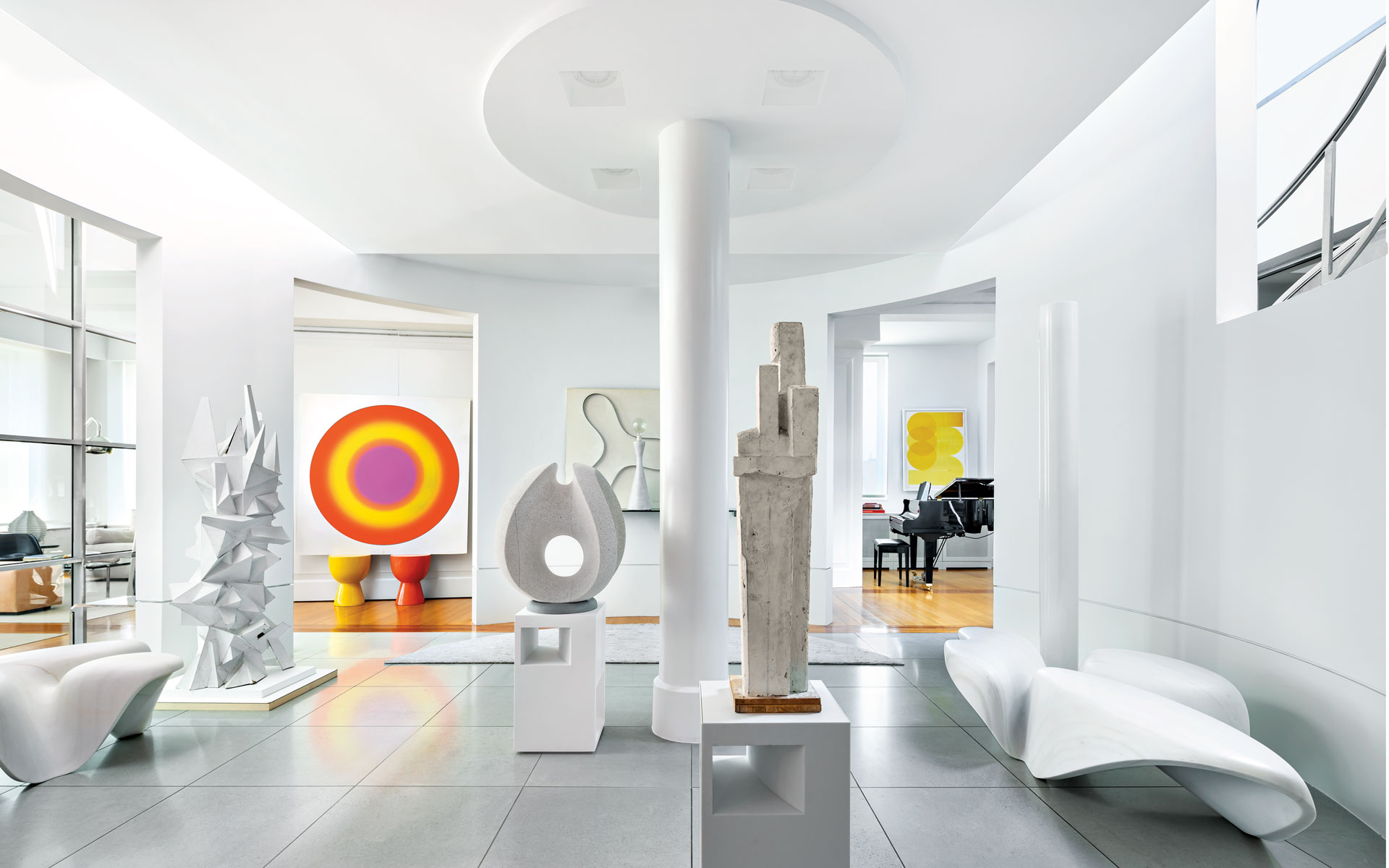 The esteemed architect rewrites the script for his longtime New York City home, making way for a more vibrant collection of art and furnishings while preserving its most dynamic features 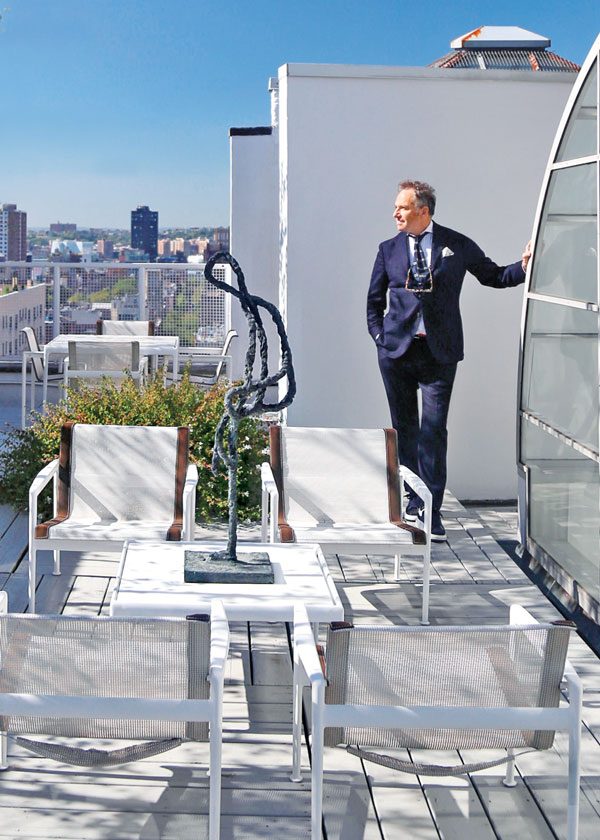 Sometimes, even perfection needs an update. Twenty-five years ago architect Lee F. Mindel, cofounder of the firm SheltonMindel, renovated a 3,500-square-foot, 12th-floor penthouse in New York City’s Flatiron district to be his home. Working in collaboration with another New York architect, Reed A. Morrison, he transformed the space into a study in restrained elegance. In 1999, it won the Honor Award for Interior Architecture from the American Institute of Architects.

Among the apartment’s distinctive features is a striking rotunda just inside the entrance that serves as a gallery, with large doorways opening to the surrounding entertaining areas. A stainless-steel serpentine staircase winds around it, leading up to a pavilion-like lounge and an expansive rooftop terrace. With four exposures, the apartment enjoys views of some of Manhattan’s most iconic buildings. 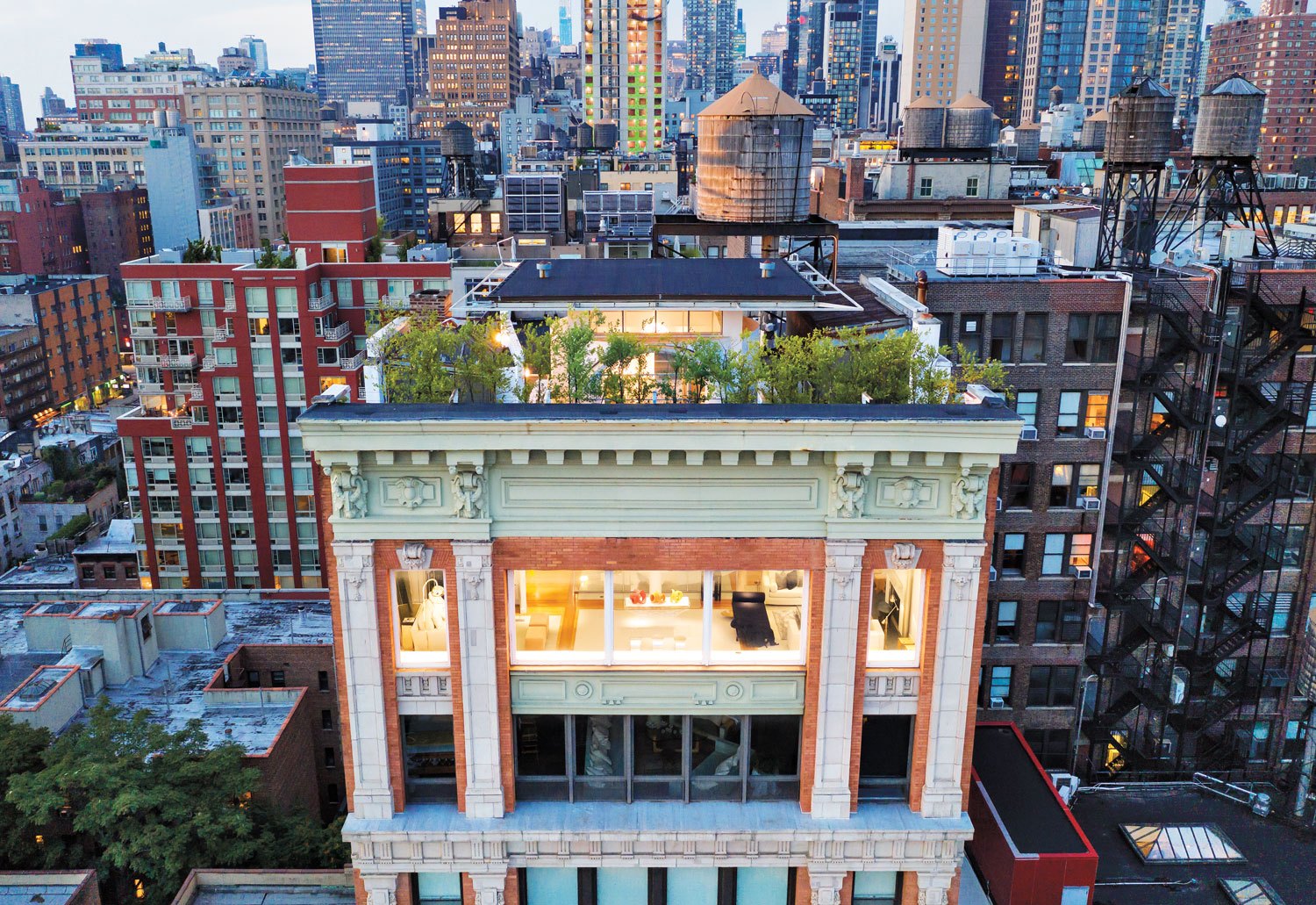 A view overlooking the residence, whose terraces were designed in collaboration with Jonathan Farber of R/F Landscape Architecture. Photo: MICHAEL MORAN/OTTO

At first, Mindel filled his new home with furniture by a Who’s Who of 20th-century design stars, from Gaudí to Gehry, with a hefty dose of Scandinavians such as Poul Kjærholm, Hans Wegner, and Arne Jacobsen. The refined mix of furnishings and materials against the crisp, neutral backdrop was, as Mindel put it, “extravagantly minimal.” Morrison describes the design as “a more modern idea that was based in tradition,” adding, “If we were to do it again, it might end up the same.” 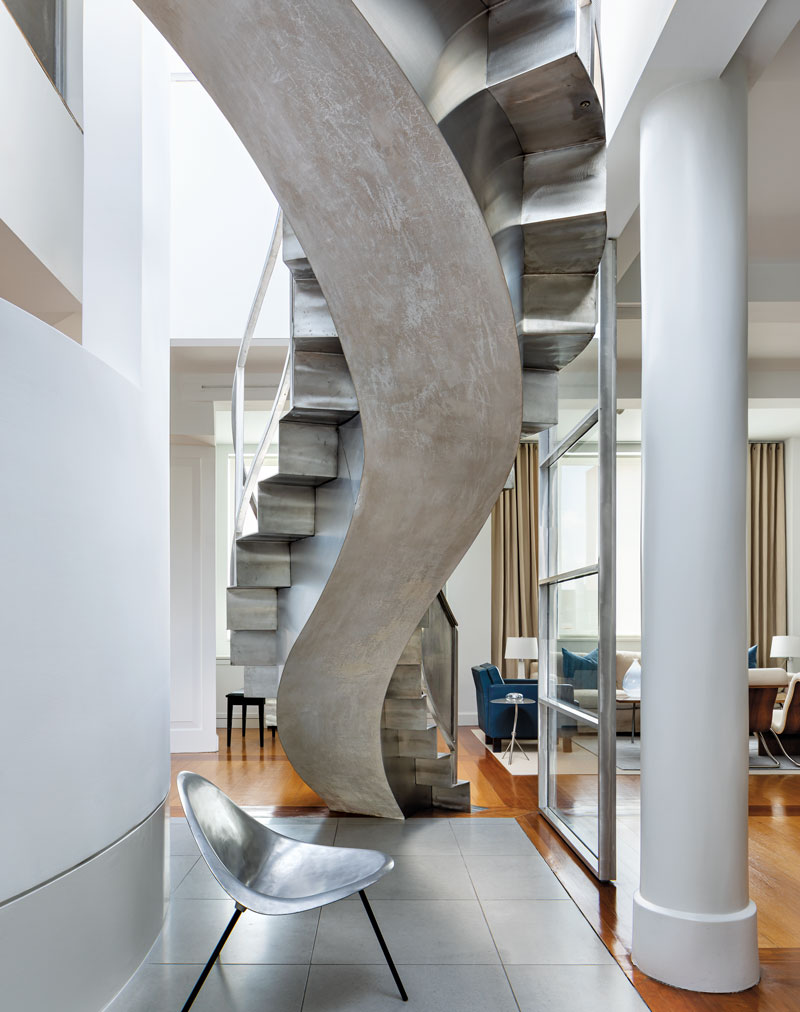 One of the most eye-catching elements of the apartment, which Mindel designed 25 years ago with architect Reed A. Morrison, is the twisting stainless-steel staircase that leads to the rooftop. Photo: MICHAEL MORAN/OTTO 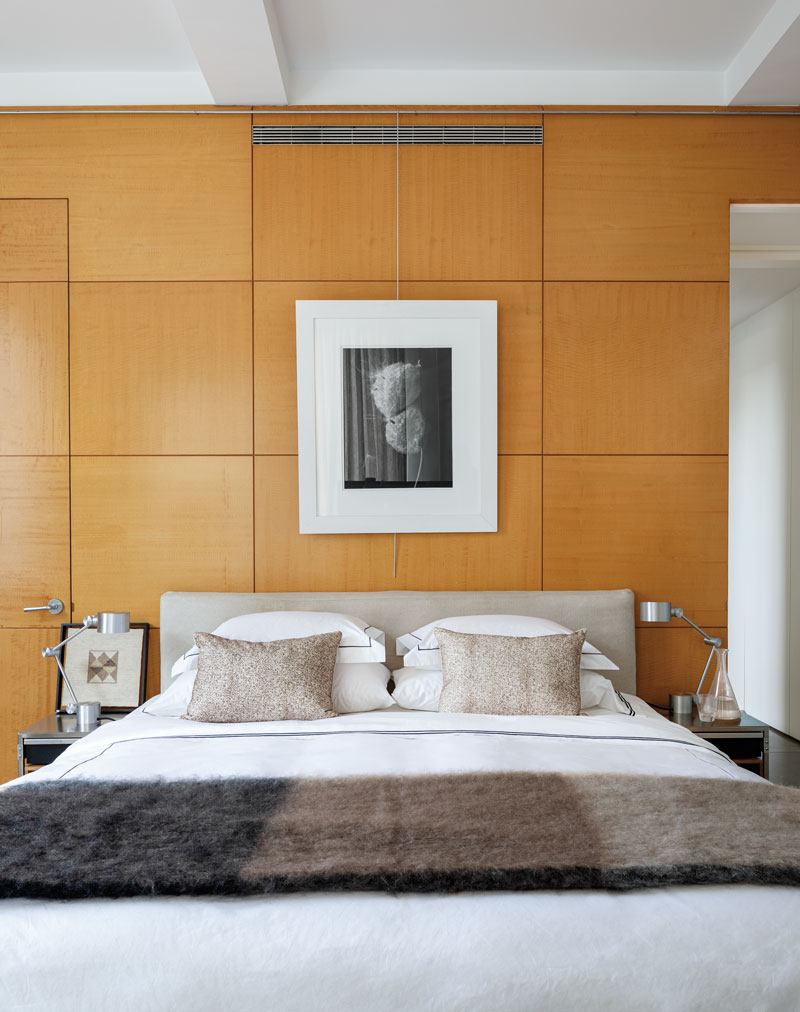 In the primary bedroom, a wall of sycamore panels serves as the backdrop for a Christopher Beane photograph mounted above a SheltonMindel-designed bed dressed with Frette linens and an Hermès throw; the bedside lamps are by Tom Dixon. Photo: MICHAEL MORAN/OTTO

But even if the architecture still looks fresh, it’s no surprise that Mindel—a passionate collector of modern and contemporary art as well as design (he is on the vetting committee for the Design Miami/ fair)—decided it was time for an update. He now shares the apartment with his husband, architectural designer José Marty, and together they completed a rethink of the space just before New York’s COVID-19 shutdown in March. “I wanted to make it more of a house,” says Mindel. “I wanted to live in it in a different way and made the palette brighter and more optimistic. My aesthetic has become more personal.” 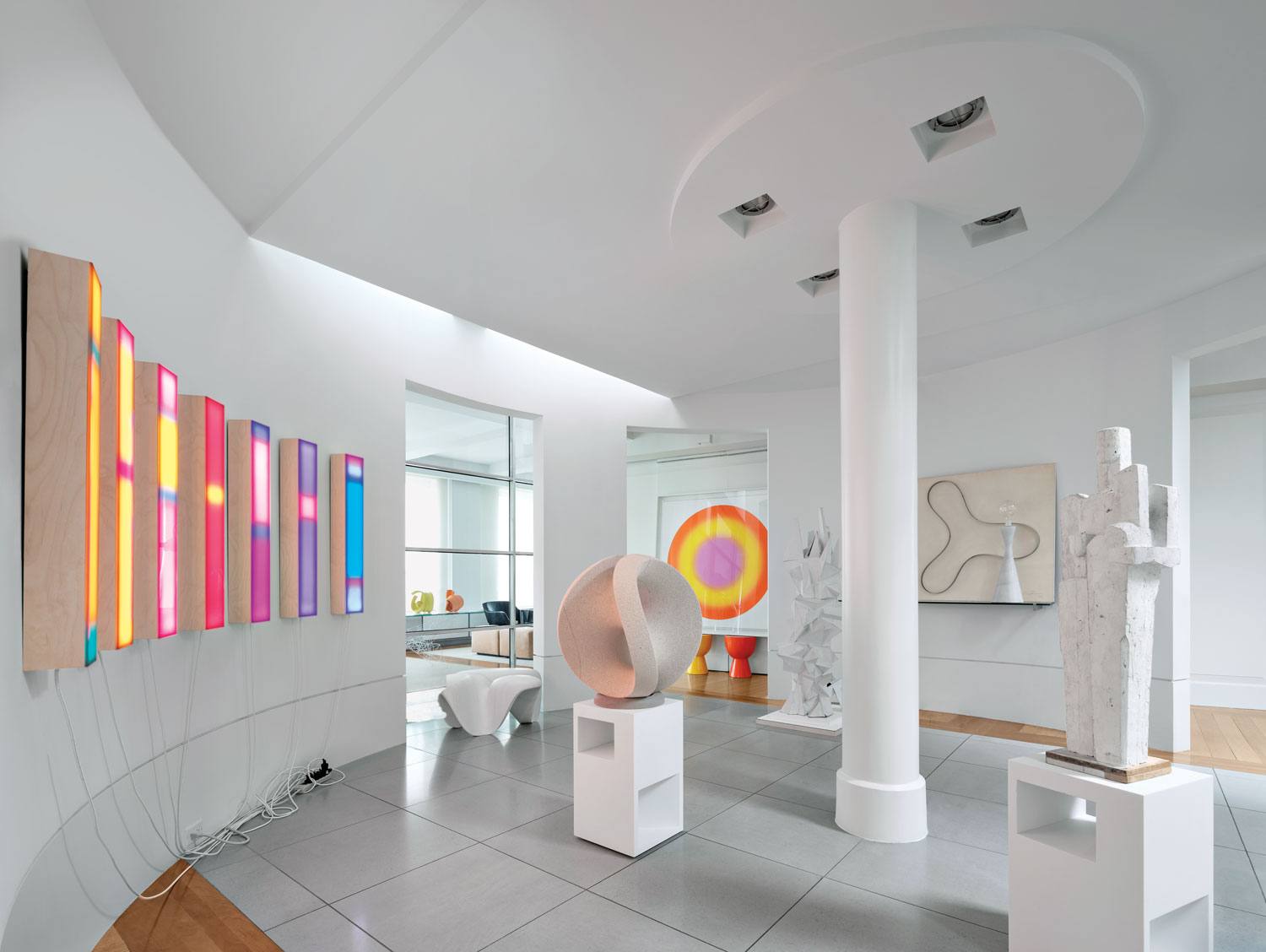 The rotunda is home to a neon light installation by South African artist Floor van de Velde, acquired from Provincetown, Massachusetts, gallery Room 68. “The placement was inspired by Ellsworth Kelly’s rectangular work in semicircular spaces,” says Lee F. Mindel. “The way the light interfaces is different than on something flat.” Photo: MICHAEL MORAN/OTTO

The goal wasn’t to do any structural alterations, Mindel explains, but to “change the perception of the space—it’s filled with life,” something he sees as an important lesson for the post-coronavirus world. Now when you step into the rotunda, you are greeted with sculptural pieces, including a folded-paper tower by Irving Harper and two marble benches by Zaha Hadid. On the far wall, a sculptural study in metal by Bruno Mathsson hangs next to a Georges Jouve ceramic lamp that has a lightbulb but no shade. “I view it as a sculpture that has a light on it,” Mindel says. Nearby, perched on two brightly colored Pols Potten stools, is a colorful lithograph by Ugo Rondinone.

“I made the palette brighter and more optimistic. My aesthetic has become more personal”

Mindel divided the long living room, with its view toward One World Trade Center, into multiple seating areas. At the center, a Tom Dixon glass-top table with an architectonic wire base is joined by curvy metal stools by Roger Tallon and ceramic swirls in lively sherbet hues by Wouter Dam. Arrayed around the elegant white-glass fireplace at one end of the room are a Jean Prouvé daybed, floor lamps designed by Yrjö Kukkapuro for Artek, and a pair of smoked-glass screens by Mindel’s late friend Jeremiah Goodman, who was famous for his glamorous illustrations of interiors. At the room’s opposite end, presided over by a large Günther Förg artwork, standout pieces include a pair of rare black leather armchairs by Eero Aarnio and a squiggly floor lamp by Maarten Baas that was a unique commission.

Next to the dining room, there’s another inviting sitting area, with a piano, where in non-pandemic times, visitors might enjoy a cocktail while relaxing on custom Alvar Aalto armchairs or molded-plywood chairs by Jørn Utzon, architect of the Sydney Opera House. From here, you can see through to the two guest bedrooms, which may be closed off with sliding wall panels. In the adjacent main bedroom, a wall of honey-toned sycamore panels behind the bed adds notable warmth. 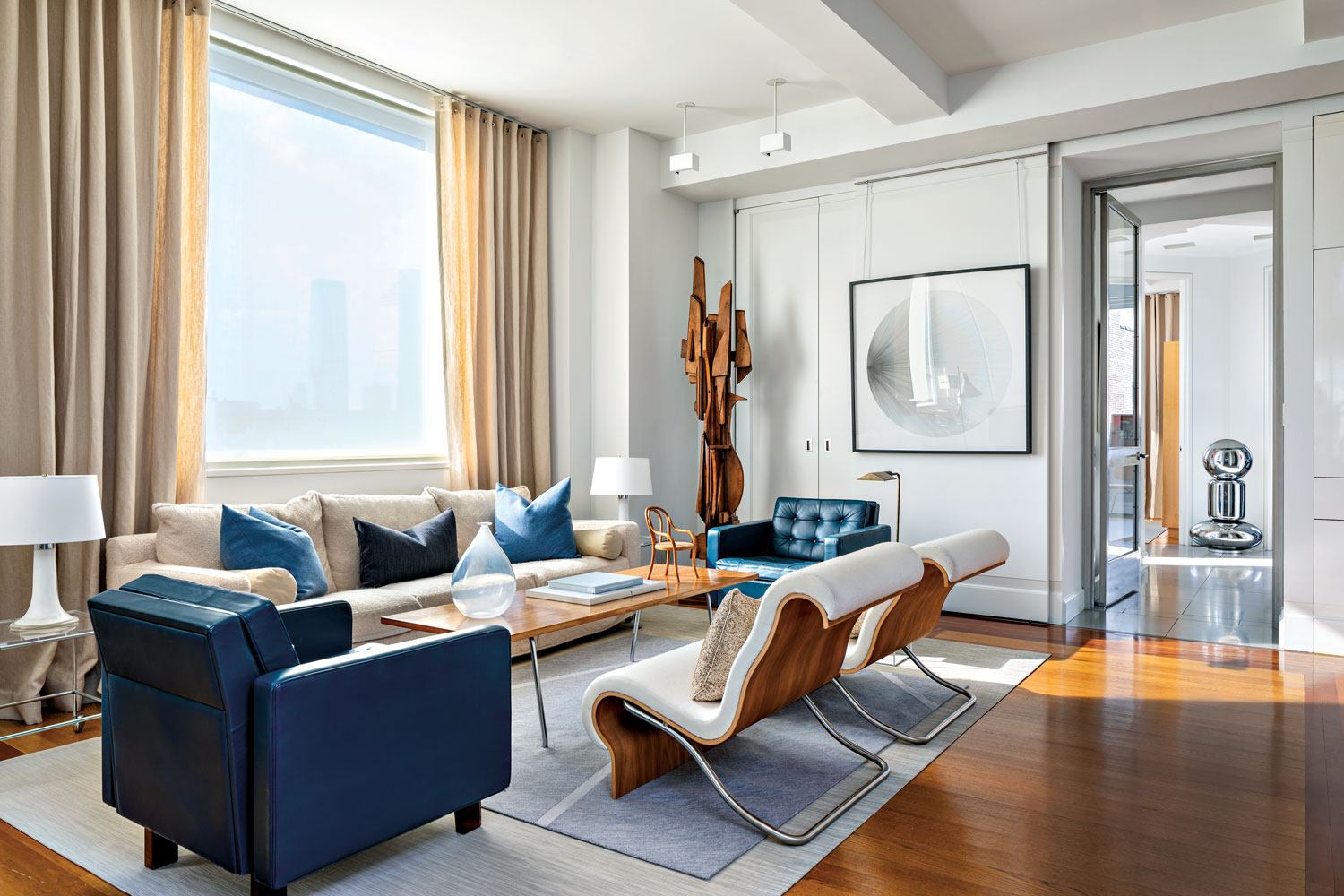 Next to the dining area, a Hans Wegner cocktail table is encircled by Alvar Aalto tufted-leather club chairs, molded-plywood chairs by Jørn Utzon, and an Antonio Citterio sofa for B&B Italia. An artwork by Tricia Rumbolz hangs near a wood sculpture by Ricardo Santamaria, the curtains were made by Ann Baderian using a Rogers & Goffigon fabric, and a rug designed by SheltonMindel for V’Soske is layered atop a floor covering by Chilewich. Photo: MICHAEL MORAN/OTTO

With current projects that include a penthouse at 220 Central Park South for repeat clients Sting and Trudie Styler, as well as other Manhattan apartments and houses in Southampton, Sag Harbor, and Marin County, California, Mindel certainly has plenty on his plate. But his evolution continues. “I find myself becoming more of a student now than when I was an actual student,” he says. “And I keep asking myself how I can make things better.”

A version of this article first appeared in print in our 2020 Fall issue under the headline “Ensemble Theater.” Subscribe to the magazine.