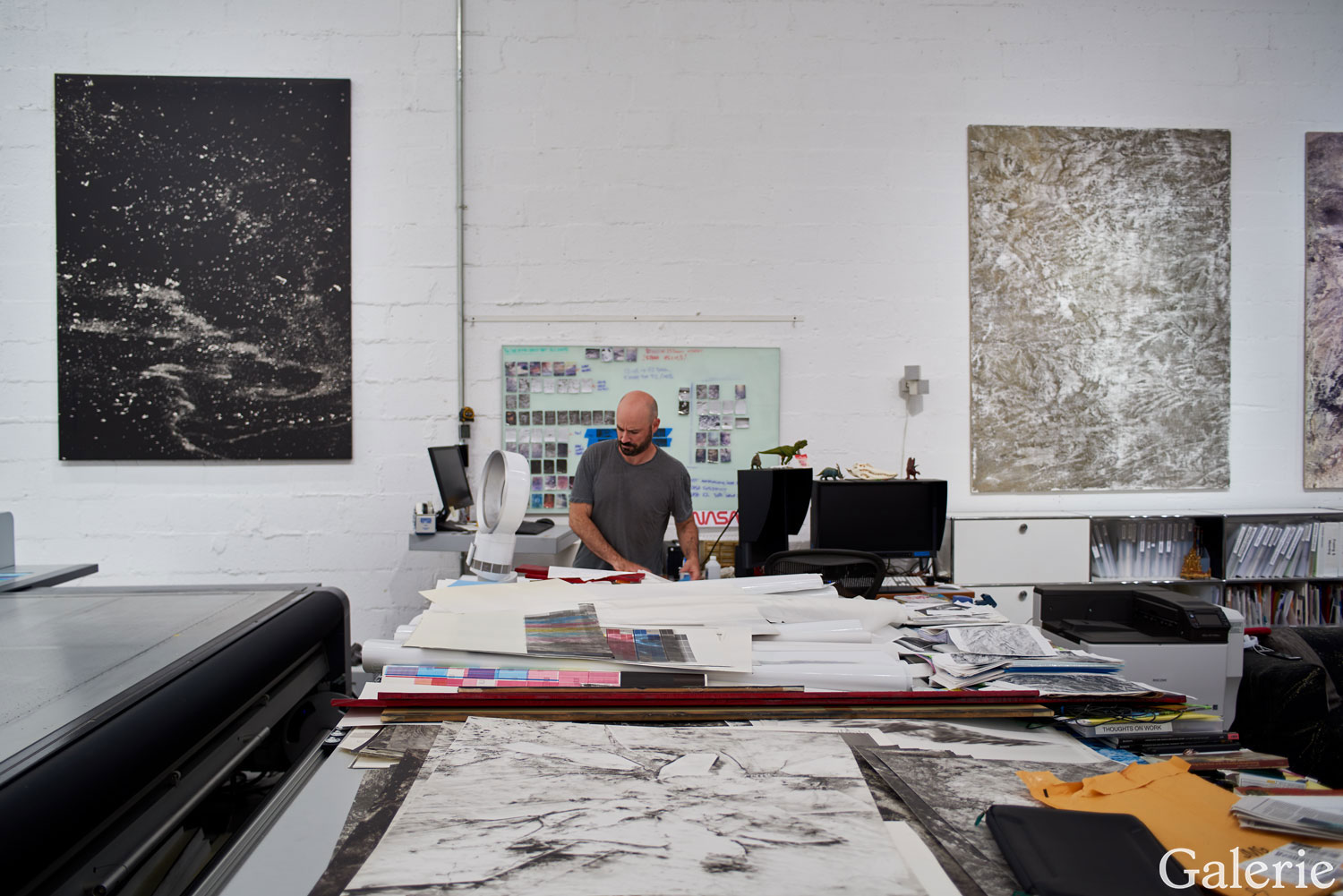 Guariglia in his studio, surrounded by his large-scale aerial photographs.
Photo: Michael Mundy

Artist Justin Brice Guariglia’s process incorporates elements suited to a science fiction thriller: flights with NASA, cutting-edge technology, and a mission to raise questions about pressing environmental concerns. Guariglia’s art itself is epic in scale. JAKOBSHAVN I, the centerpiece of his forthcoming exhibition at the Norton Museum of Art in West Palm Beach, Florida, spans 16 by 12 feet. Composed of nine polystyrene panels, it depicts the textured surface of 110,000-year-old ice that calved, or broke off, a glacier. “He’s playing with the ideas of history, what’s here and what’s gone, what caused the disappearance and what enables us to recognize that disappearance,” says the Norton’s photography curator, Tim Wride. Other works on view, such as LANDSCAPE STUDY I, GOLD and ÖBÜR I, derive from photographs the artist took on commercial flights over agricultural lands in Asia.

Guariglia shot Greenland’s glacial ice sheets from a NASA plane after embarking on a collaboration with the agency in 2015. Through 2020, he will be embedded with its Oceans Melting Greenland program. “NASA is focused on great existential issues of our time, whether it’s going to Mars or going up into space or understanding how an ice sheet is transforming,” Guariglia says. The partnership taught him the particulars of this delicate and evolving landscape and allowed him to shoot off-the-grid locations.

Baffin Bay II, 2015, a work from 2016 made from acrylic, carbon black gesso, linen, and aluminum panel. Photo: Courtesy of the artist

Back at his studio in Brooklyn, Guariglia prints his aerial photographs with thick acrylic ink using a massive printer that spans nearly the width of the room. He divulges that he’s the only artist in the world who owns one, and he will not disclose the model, calling it “the Rolls-Royce of the technology.” “You wouldn’t ask Picasso, ‘What is the paintbrush you use?’ ” he says. “This is technology that a lot of people are just learning about, and I was an early adopter.” Guariglia spent 1,500 hours developing his technique, which can include three months of preparing a single panel with multiple coats of gesso that he continually sands down. Guariglia in his studio, surrounded by his large-scale aerial photographs. Photo: Michael Mundy

Guariglia has always been drawn to nature. Born in 1974, he describes his hometown of Maplewood, New Jersey, as “a very green, leafy little kind of enclave.” Nevertheless, from 1995 to 2015, he lived in dense metropolises across Asia, including Beijing, Hong Kong, Singapore, Tokyo, Taipei, and Shanghai, working as a documentary photographer and a photojournalist for publications such as Smithsonian and The New York Times. During this period, he noticed the rapid ecological transformation around him. “I would walk outside in China, and my nose would run black” because of the burning coal, he says. “You’d come outside one day and see an empty lot, and then two or three weeks later, there was a building there.” Yet he claims that his interest was more philosophical than a simple concern with rapid development and fossil-fuel usage: Thinking about the Anthropocene, the age of humans, inspired him to turn away from realism and toward the ambiguity and abstraction evident in his new series.

Photographing cities, Guariglia says, would have been “the easy thing.” Instead, like a science fiction hero, he “wanted to go into a place, into a space, that hasn’t been explored yet.” To understand where humans are headed, he turned to the unseen surfaces we’ve been impacting for hundreds of thousands of years. guariglia.com

Cover: Guariglia in his studio, surrounded by his large-scale aerial photographs.
Photo: Michael Mundy
Next Post