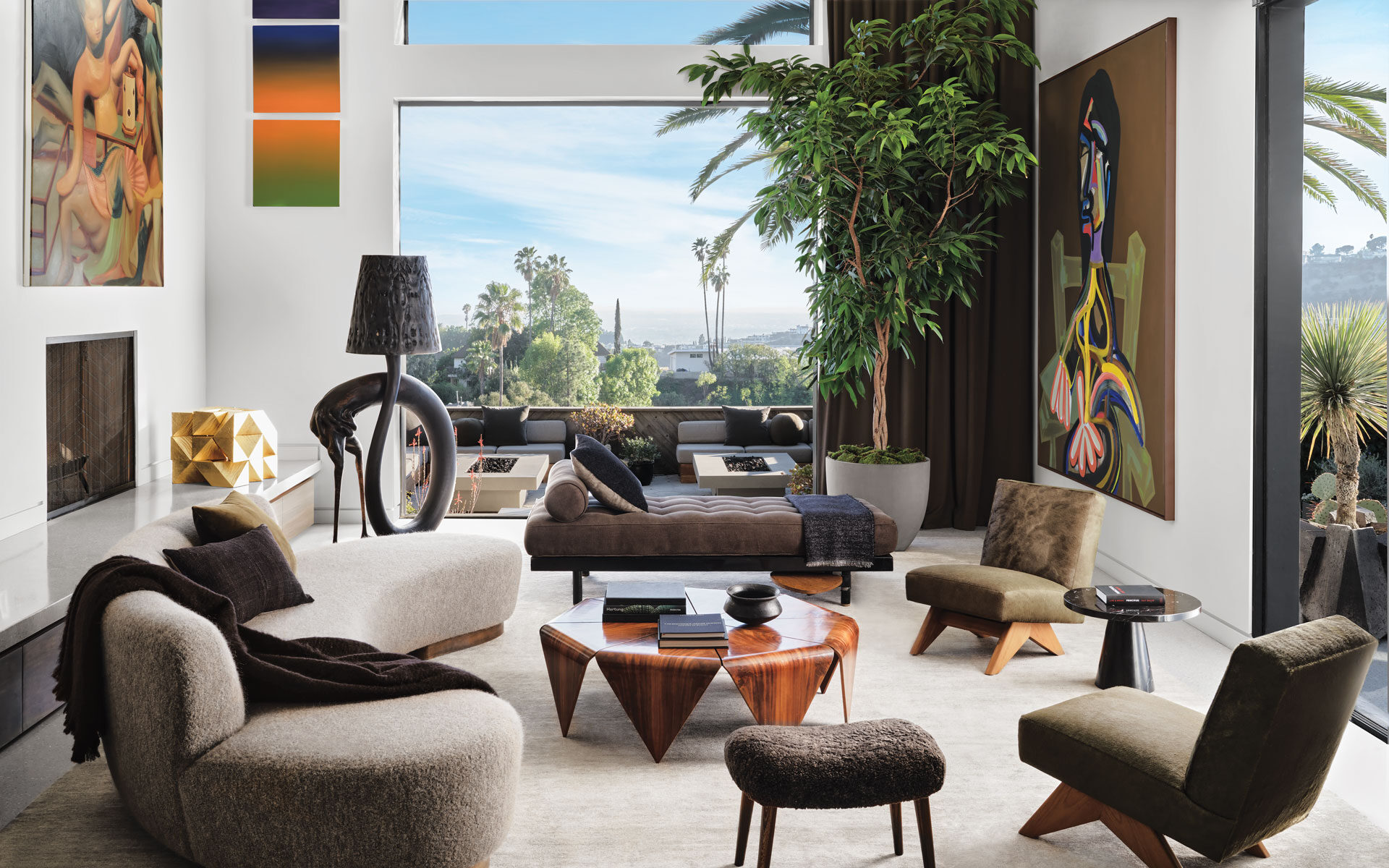 Nearly 20 years ago, the Los Angeles art adviser and curator John Wolf was working in production for Warner Bros., living his best Melrose Place life in a midcentury Hollywood apartment building with a pool in the middle. “It really was a friendly, gossipy little complex,” says Wolf. “There was a phase when a couple of artists lived there, and they’d all come over and make art on my living room floor.” 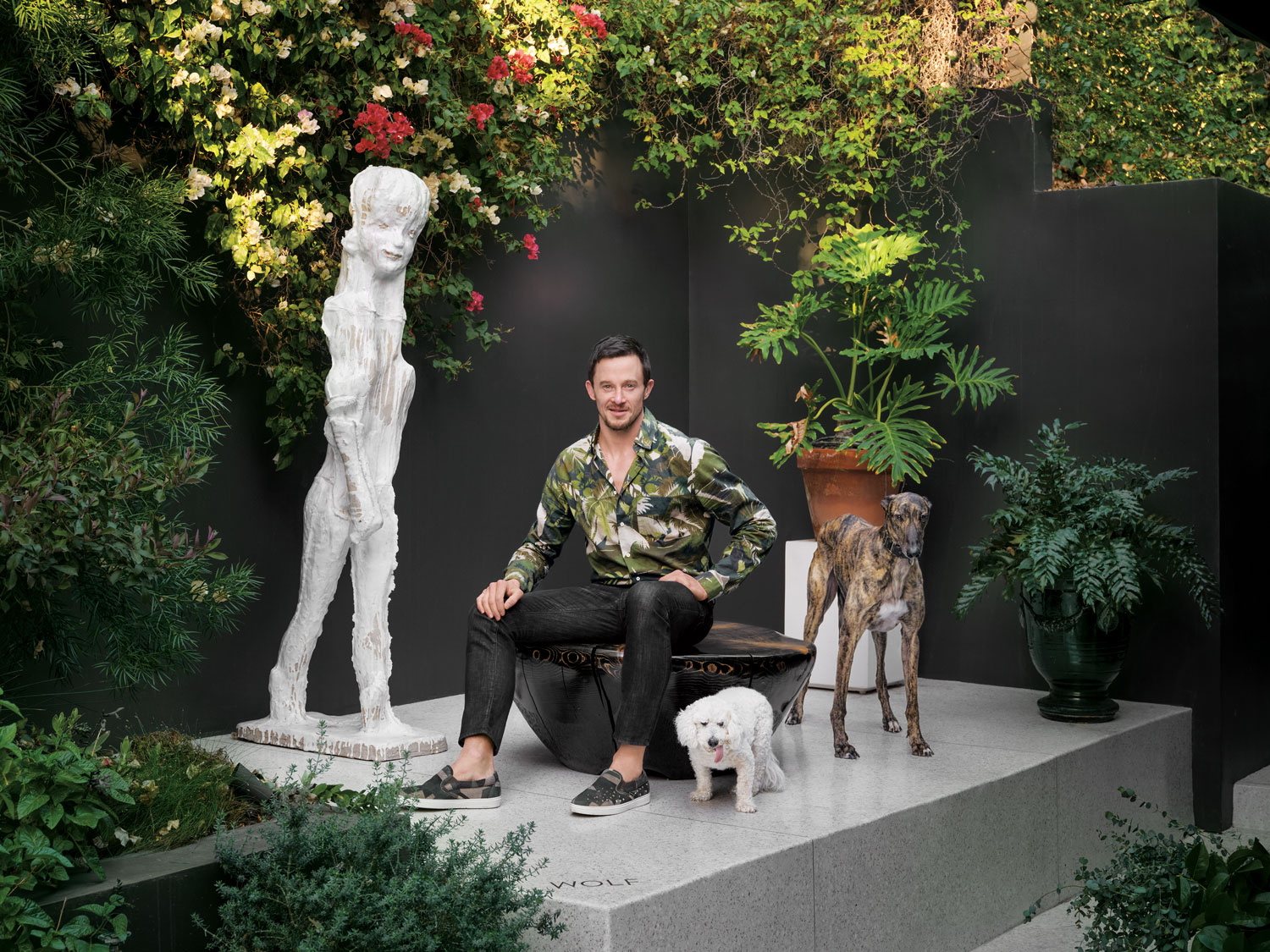 John Wolf sits on a Daniel Lee Pollock table, joined by his dogs, A-Rod and Ruffes, next to a sculpture by Johan Tahon. Photo: Douglas Friedman

Another tenant Wolf found himself drawn to was Adam Bram Straus, a former investment banker who had reinvented himself as a decorator and was working for Kenneth Brown Design. “Adam’s was the chicest apartment there,” recalls Wolf. The two became friends, and when Wolf moved to his next apartment, in Wilshire Vista Heights, he asked Straus to design it.

At the time, Wolf was going through some career soul-searching of his own. Having discovered that the film business “wasn’t as creative as I’d thought it would be,” he says, he briefly took a sales job in the tech industry. But he’d recently caught the art bug, collecting modestly, and he thought perhaps he could make his new passion his work.  “I started wondering, How can I fit into this world?” 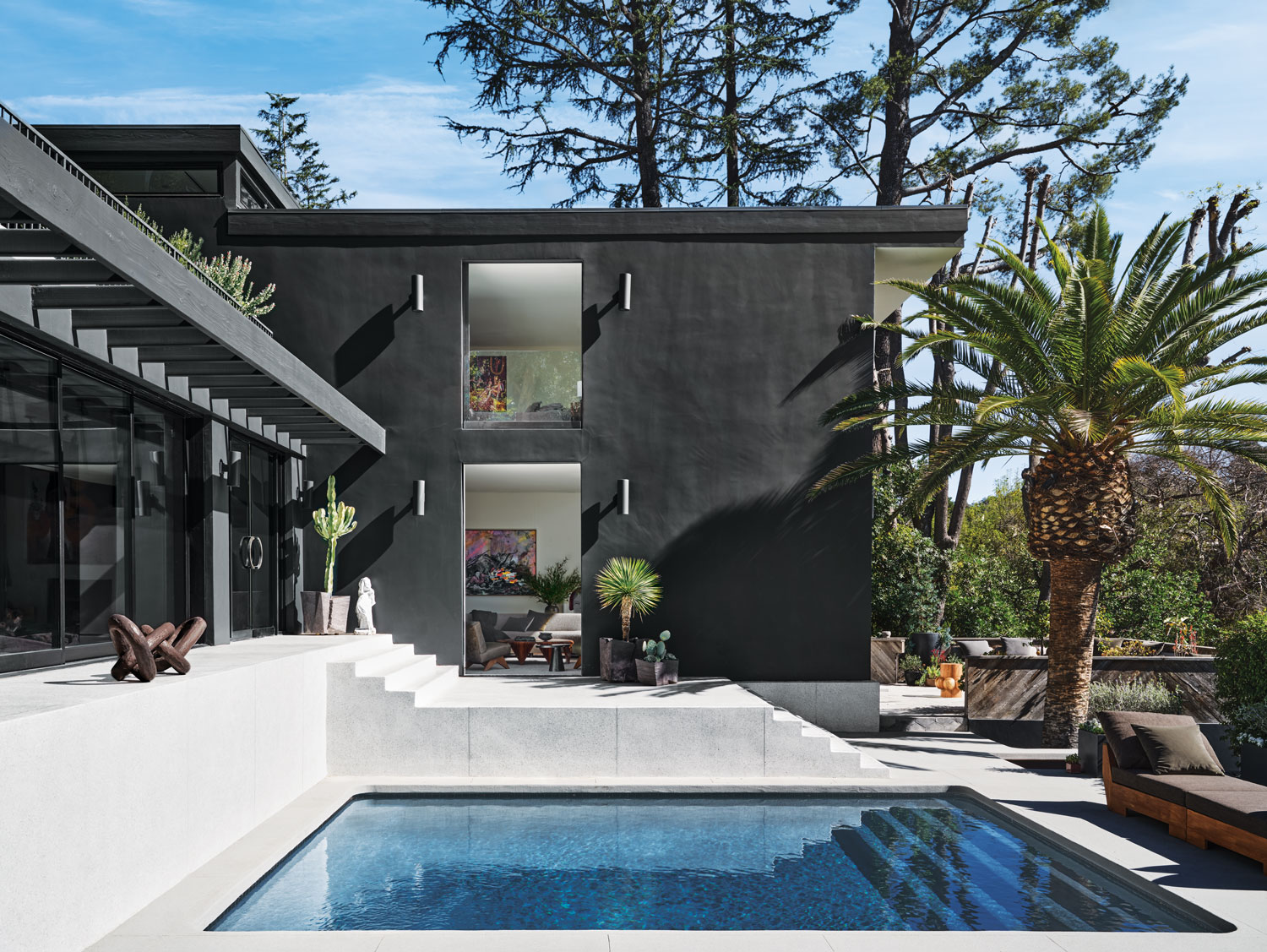 A Kelly Lamb chain sculpture, cacti in Jonathan Cross ceramic pots, and a custom-made bench covered in a Holly Hunt fabric are arrayed around the swimming pool outside art adviser John Wolf’s 1970s home, overlooking Nicholas Canyon in Los Angeles. Among the updates he and designer Adam Bram Straus made was painting the exterior black. Photo: Douglas Friedman

Straus recommended Wolf as an art adviser to some of his interiors clients, and soon Wolf was picking up his own clients, including designers such as Kerry Joyce, Thomas Pheasant, and James Magni. “He literally just took it and ran with it,” says Straus.

Fast-forward 15 years: Straus’s design firm and John Wolf Art Advisory & Private Brokerage are thriving, and the two old friends and collaborators have recently completed their third L.A. home for Wolf. (The second was a five-bedroom Dutch Colonial in Mid-City that they renovated in 2014.) Located in the Hollywood Hills, the 1971, two-story residence features abundant outdoor spaces and seductive vistas of the city below. Wolf purchased it from a Texas oil and cattle heiress with idiosyncratic tastes. Says Straus, “She did a huge investment into the infrastructure of the house, but the finishes were just random and trippy.” 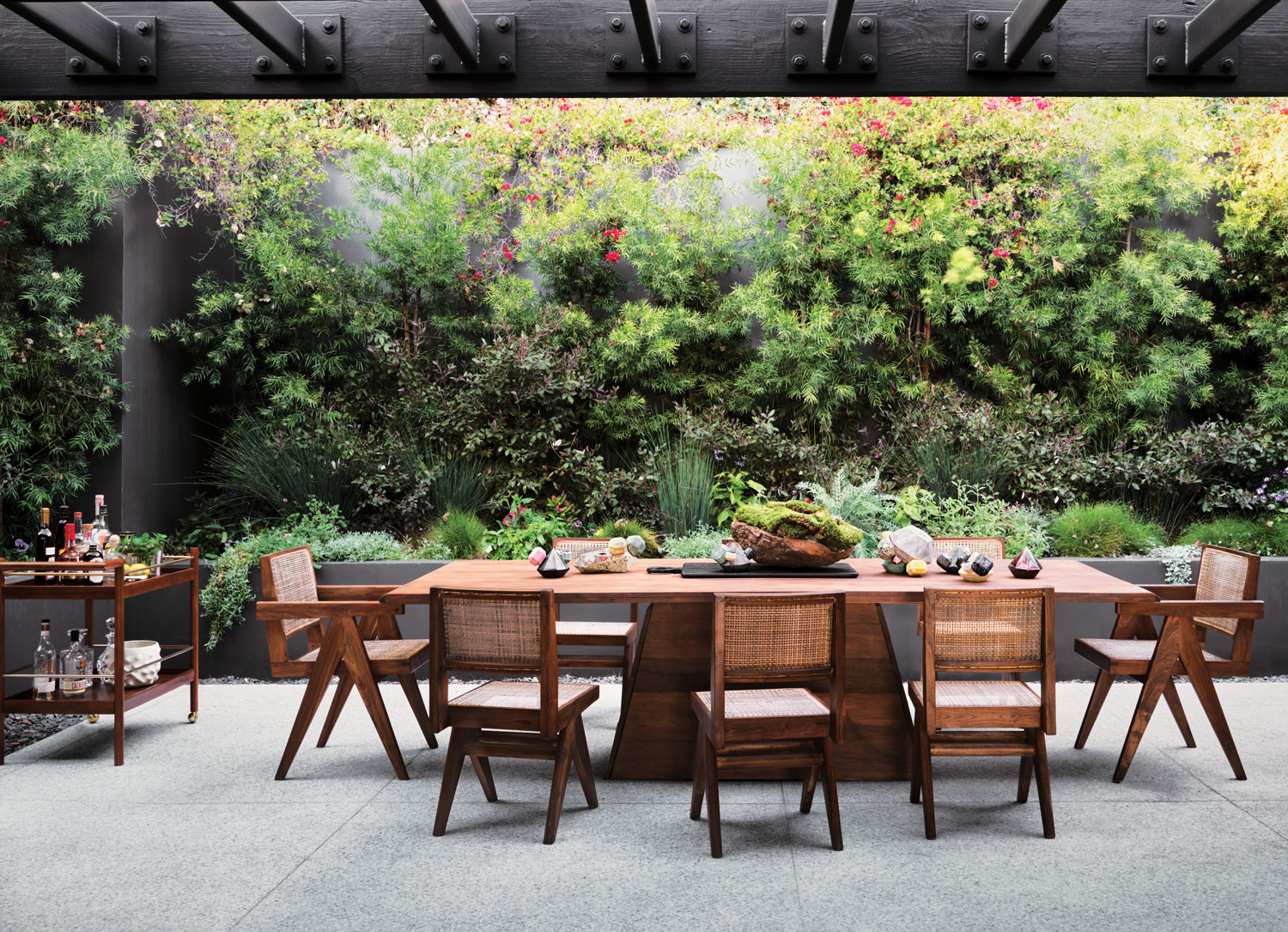 Wolf insisted on preserving a few of her eccentric touches, including a powder room’s Star Wars–themed flocked wallpaper and its array of wall-mounted vanity mirrors above the sink. He also kept the vivid mosaic tilework, a barrage of psychedelic glass pixels, that lines the shower and tub in the primary bath.

Otherwise, he gave Straus carte blanche to gut the rest. Out went the concrete floors and brick patio, replaced with gray terrazzo. The kitchen, previously a “black hole,” says Straus, is now a tranquil focal point outfitted with elegant walnut cabinetry (sans handles) and expanses of Silver River marble. Interior walls are painted a soft, chalky white, while the exterior is all black. Seating throughout the home—from Augusto Savini Pamplona chairs in the indoor dining area to a Jean Royère Polar Bear sofa and armchairs in the family room—is upholstered in sumptuous, earth-toned cashmeres or alpacas. 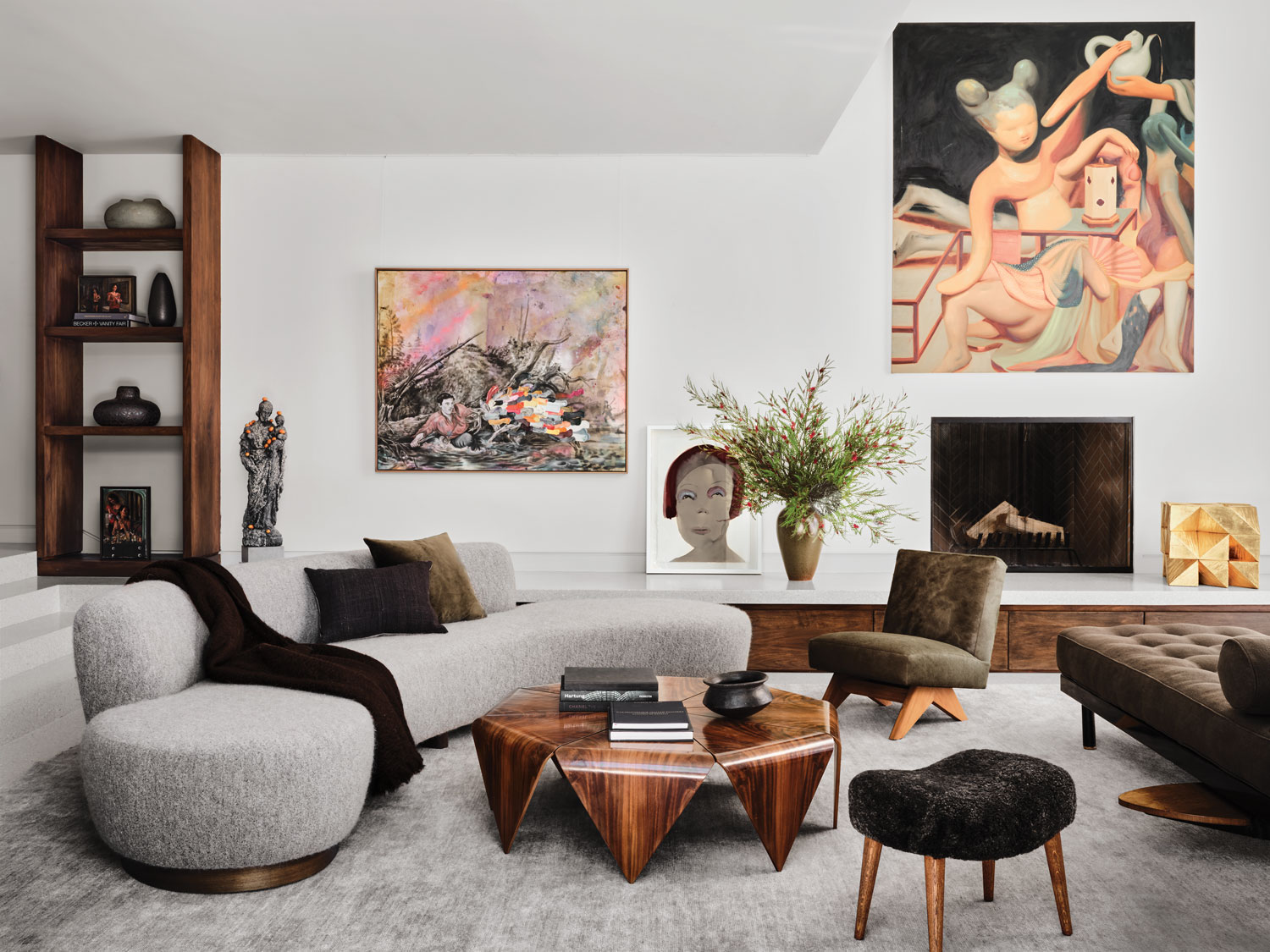 Set against this neutral backdrop is a mix of pieces by young designers—one of Vincent Pocsik’s Lamp Beings, a Haas Brothers Akira Hex stool—paired with vintage gems such as the Jorge Zalszupin cocktail table in the living room, a floating burled-wood Pace Collection console in the family room, and multiple Angelo Mangiarotti marble tables. The muted mise-en-scène also gives Wolf’s art collection, which he is constantly rotating, a chance to breathe.

“So many people work relentlessly to get the hot name, but I go with what I love and follow my gut,” he says. “I like to collect artists I’ve worked with.” The home is a living record of those relationships: filled with works from shows he has curated at the Tom of Finland Foundation and the Spring/Break Art Show, as well as “Human Condition,” a sprawling survey of art that explored what it means to be human, which he masterminded in a derelict L.A. hospital space in 2016. 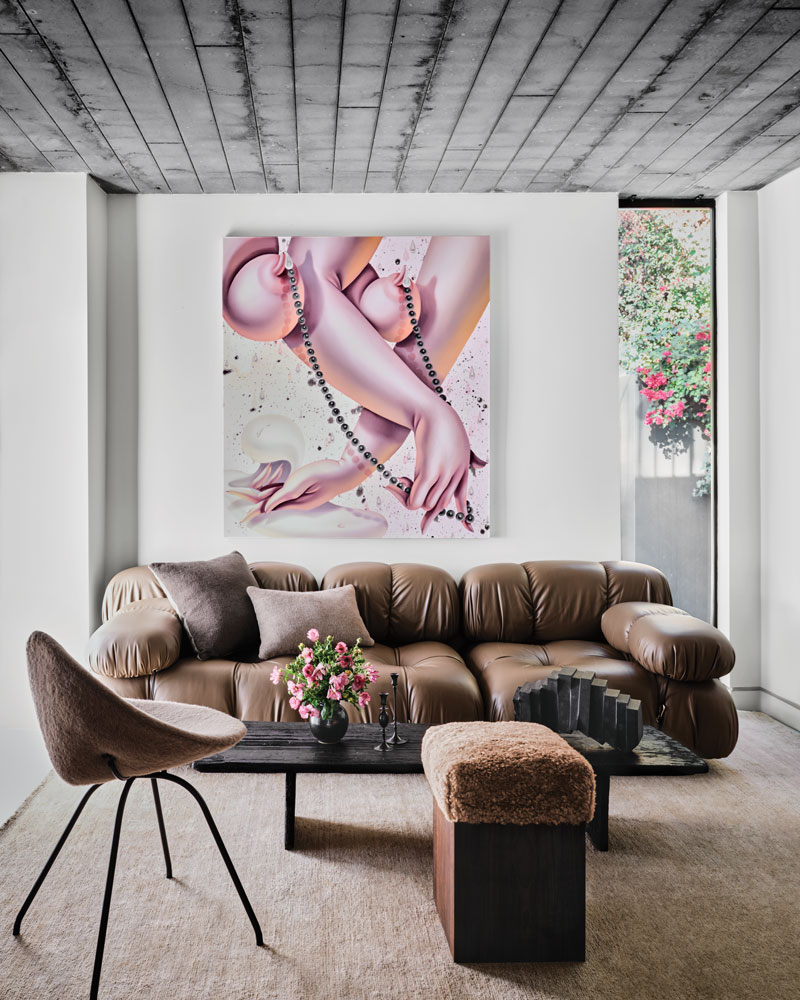 In the study, a Sarah Slappey painting animates a seating area with a vintage Mario Bellini sofa, a Carlo Ratti chair, and a shearling ottoman by Green River Project. Photo: Douglas Friedman

Joining pieces by such celebrated names as Nicolas Party, Nan Goldin, Tony Matelli, and Lita Albuquerque are works by now in-demand emerging artists like February James, Alannah Farrell, and Jean-Marie Appriou, who is represented by a sculpture of an astronaut intertwined with a dragon-like creature, or, as Wolf puts it, “a futuristic, alien-meets-medieval, time-space-warp entity.”

He acknowledges that collectors like him “are glorified hoarders,” who need to be reined in, noting, “That’s where Adam shines. He’s like a therapist for the living space.” 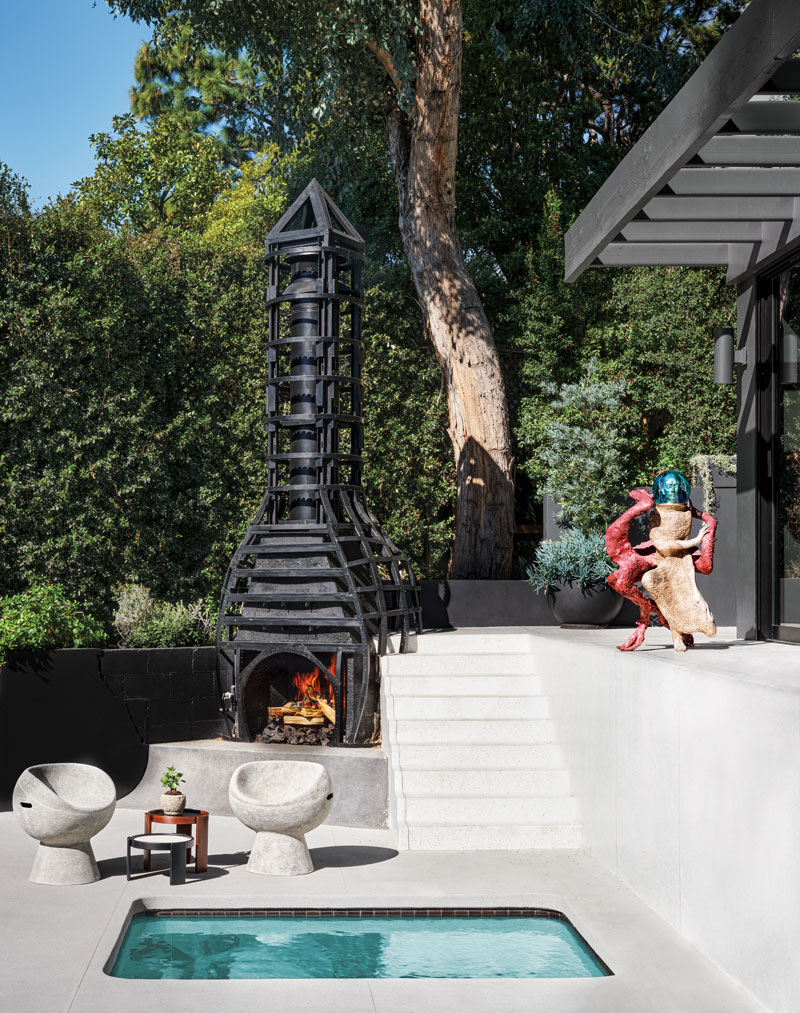 On the pool terrace, Willy Guhl concrete Pod chairs are joined by Gianfranco Frattini nesting tables beside the hot tub, with a sculpture by Jean-Marie Appriou perched above. Photo: Douglas Friedman

And the therapy doesn’t stop with the interiors. Whether it’s reveling in “hummingbird parties” atop the rooftop garden and viewing deck filled with lush plantings and succulents, caring for the vegetable garden, or curling up with a book by the mirrored firepits on the terrace lounge off the living room, Wolf notes that Straus has created spaces for “beautiful self-growth.”

Now that he’s settled in, Wolf plans to write the next chapter for this sanctuary with the same kind of deeply resonant, distinctly personal vision he brings to his exhibitions. “I love this story of carrying on somebody’s creative tradition and then adding to it and giving it a shared history,” he says. “So whoever owns this house next will have this story to tell about the people who lived here before.”

A version of this article first appeared in print in our 2021 Winter Issue under the headline “Bold Pairing.” Subscribe to the magazine. 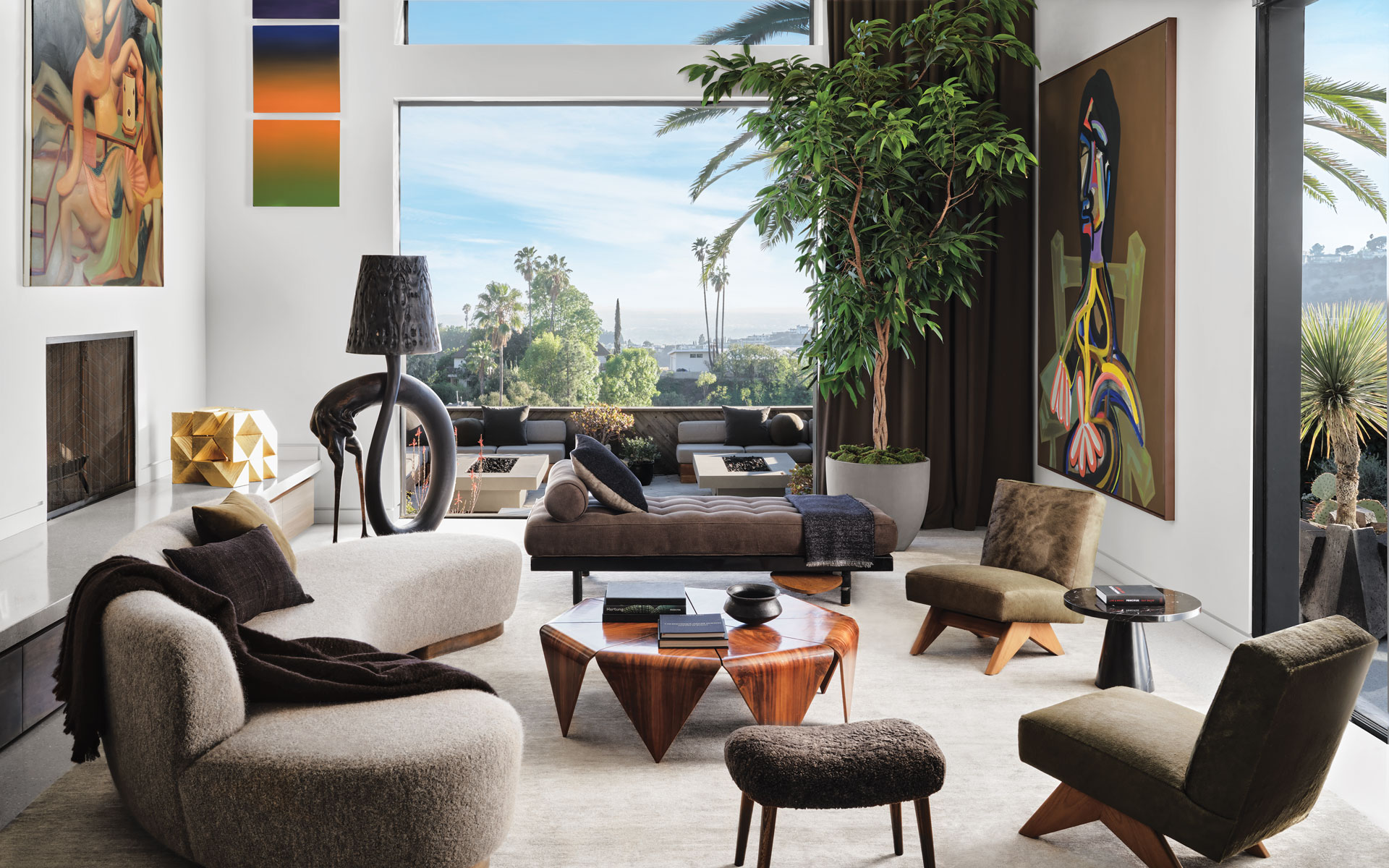