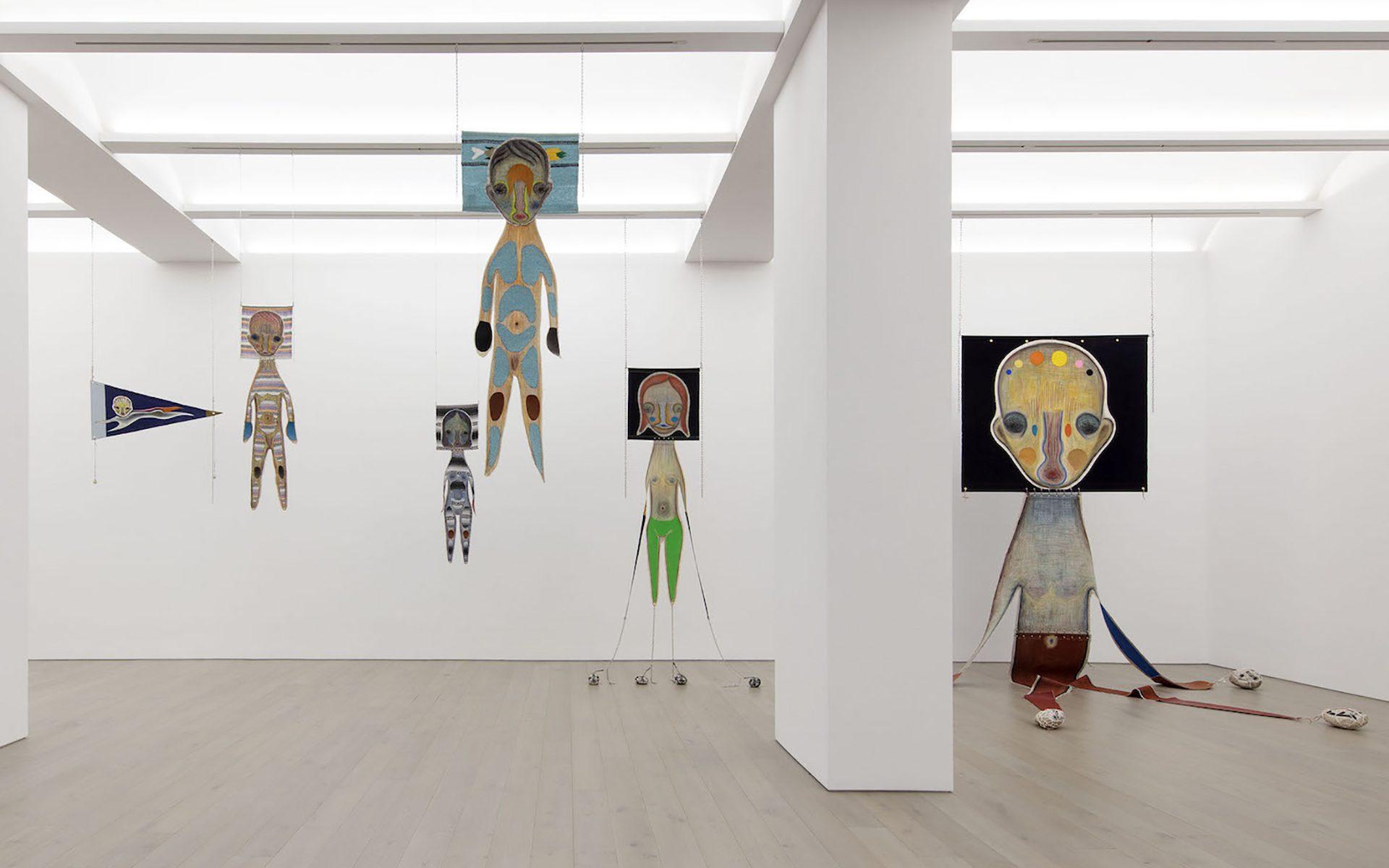 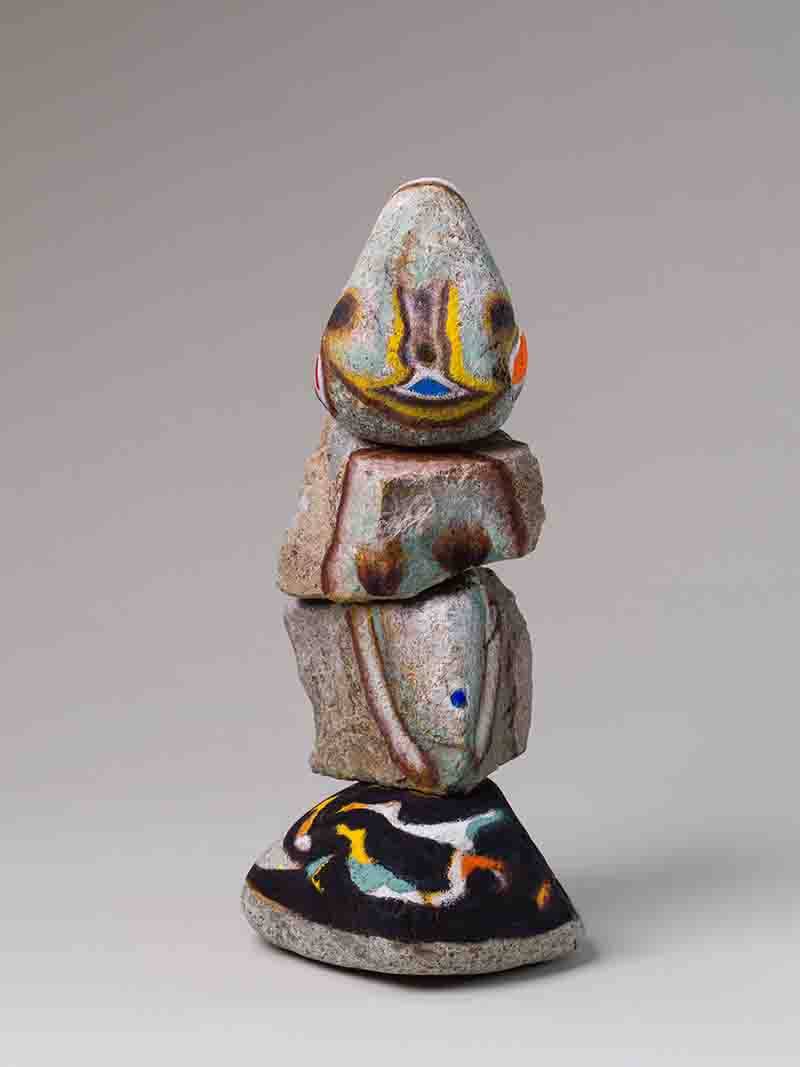 A stone work by Izumi Kato. Photo: Courtesy of Perrotin

Walking into Perrotin New York this month, one feels the immediate sensation that they are not alone. Spread throughout the top two floors of the historic Lower East Side gallery space are dozens of paintings and sculptures depicting curious, otherworldly creatures. Some are grouped in clusters in the corners, others are weighted to the floor with stones, while a tableux of soft-vinyl figures hang down the length of the inner stairwell. With childlike faces, their dark, penetrating eyes seem to hauntingly follow visitors as they explore the show.

It is the vision of celebrated Japanese artist Izumi Kato, who is best known for his mysterious paintings that explore notions of human existence. Born in 1969 in the Shimane Prefecture, located on the southwest coast of Japan, Kato grew up surrounded by Buddhism and Shintoism, a religion that centered on the belief that kami (spirits) inhabit all things, a notion that pervades the work. “They are no one and from nowhere,” Kato says of his ambiguous lifelike characters via a translator, preferring that the works speak for themselves. 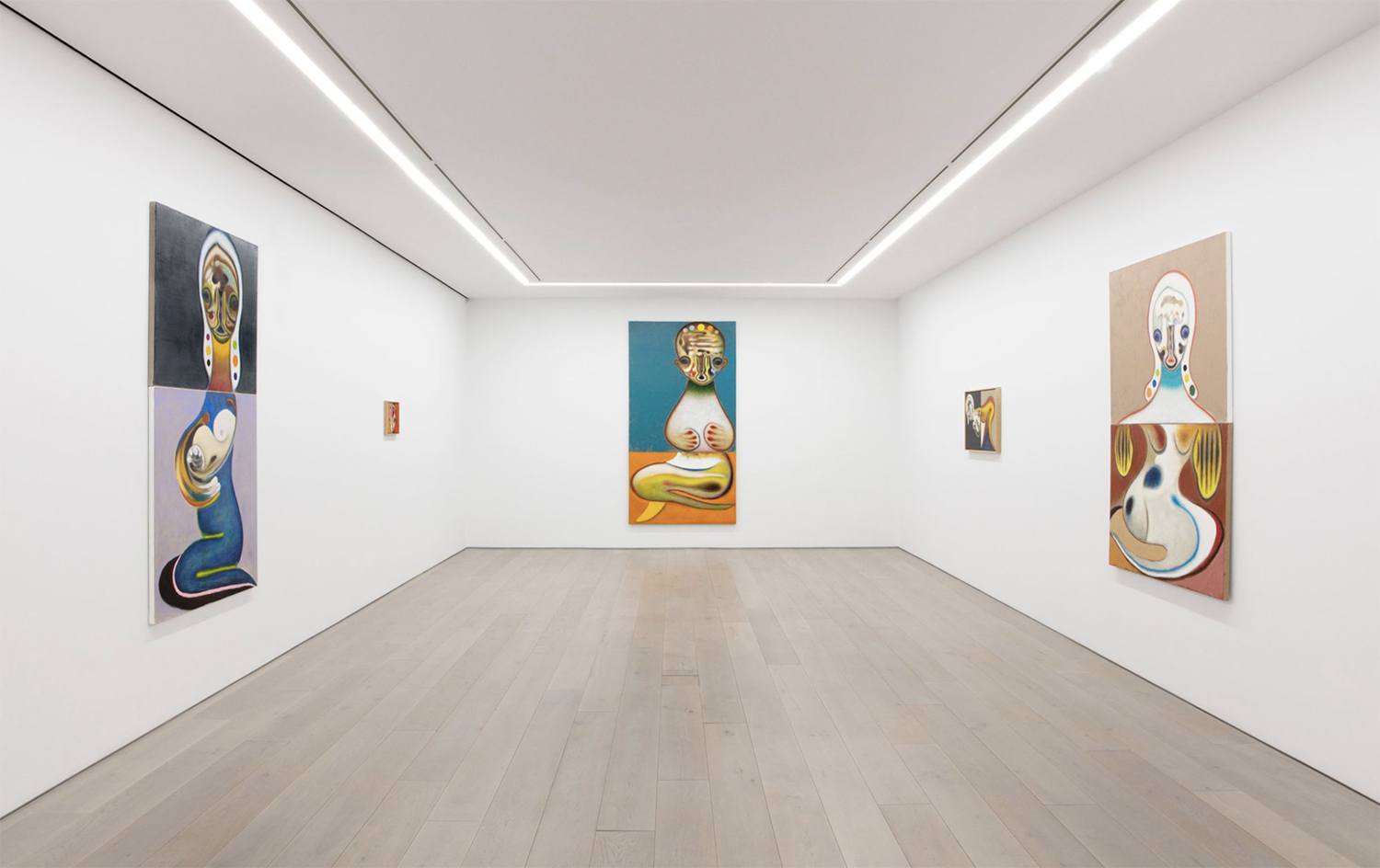 An installation view of Izumi Kato at Perrotin. Photo: Courtesy of Perrotin

On view through April 17, the show shines light on the artist’s singular point of view and innovative use of material, present in his work from the past five years, with paper, wood, fabric and rocks sourced from China, Japan, France, the Hamptons, and Mexico.

Responding to the world around him in a highly intuitive way, Kato searches for the shapes and forms that strike him, free of preconceived ideas. One series of works was completed during a residency at Casa Wabi, the Tadao Ando–designed residency and art foundation in Oaxaca, Mexico, set up by artist Bosco Sodi. “I don’t base my materials on what they mean or research their history,” says Kato, who spent three months in Mexico at the end of 2019. “I like to be more receptive. I started by going to a local market and searching for textiles and letting intuition guide me.” 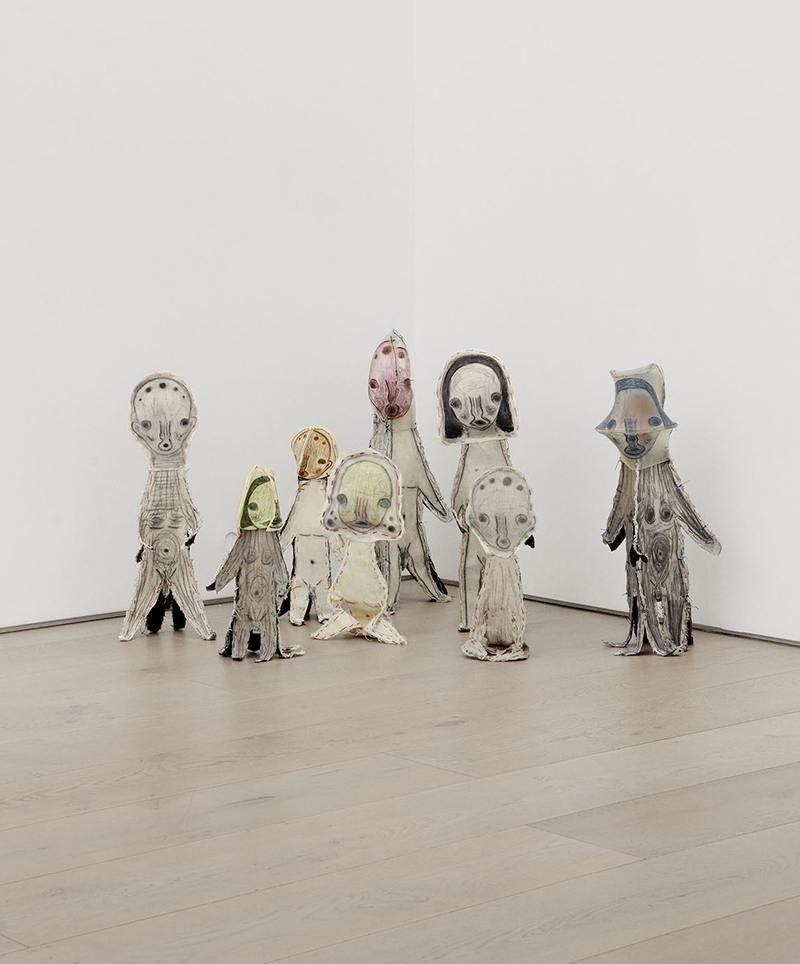 Kato similarly uses this organic process for his stone works, too. Recently, he spent time searching for stone offcuts at a historic quarry on Mount Hakone in Japan. “The key element is their shape, which I never alter. They are as I find them. I like to consider the weather that led to their form—the wind and the rain and the patterns. I find that extremely beautiful.” Once the formation appears right, he then gets to work stacking them in totem-like forms and painting them, transforming them into humanoid figures that could have come from an ancient, prehistoric site. 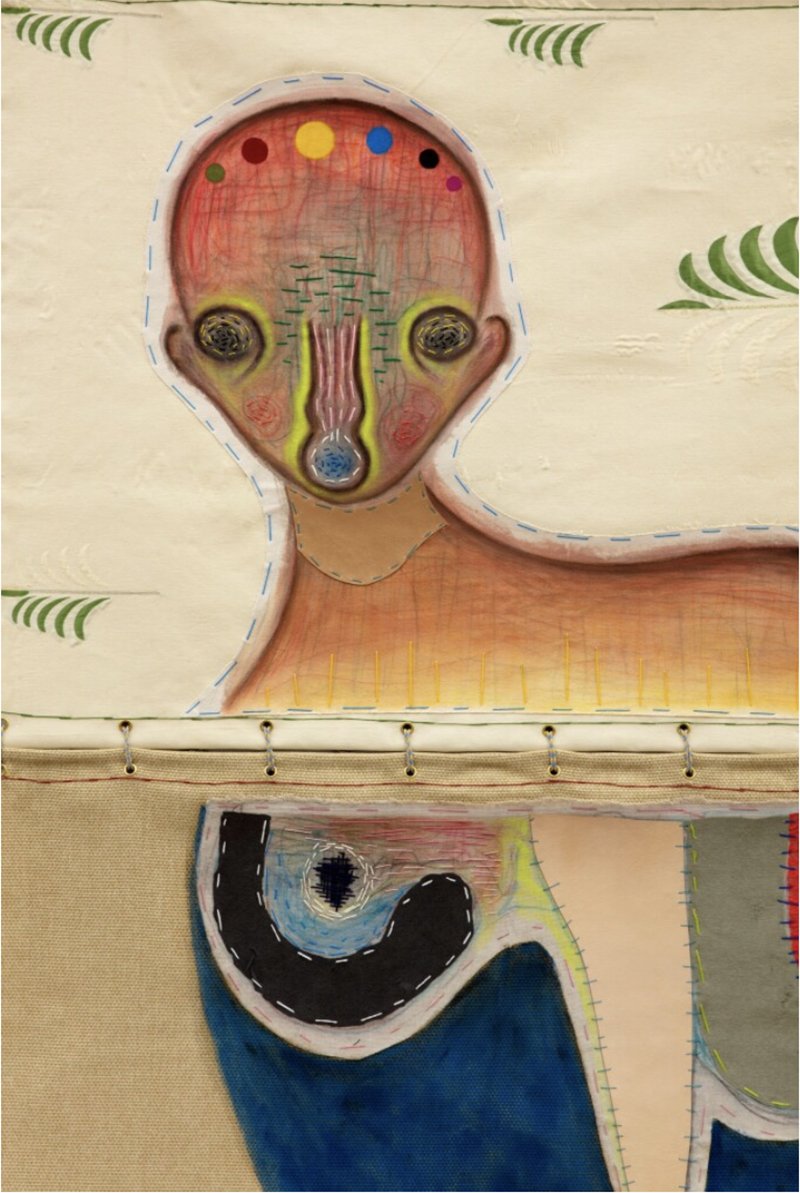 “I feel that every few years Izumi Kato picks up a completely new material, which exemplifies both his curiosity and vast talent,” says gallery partner Peggy Leboeuf, who staged his first New York exhibition in 2016 at Perrotin’s Upper East Side space. “His process is just as important as the works themselves.” The artist does not like to distinguish between painting, sculpture, and installation either. “I consider myself a painter first and foremost,” he says. “Everything I do is to get new ideas for my paintings.” 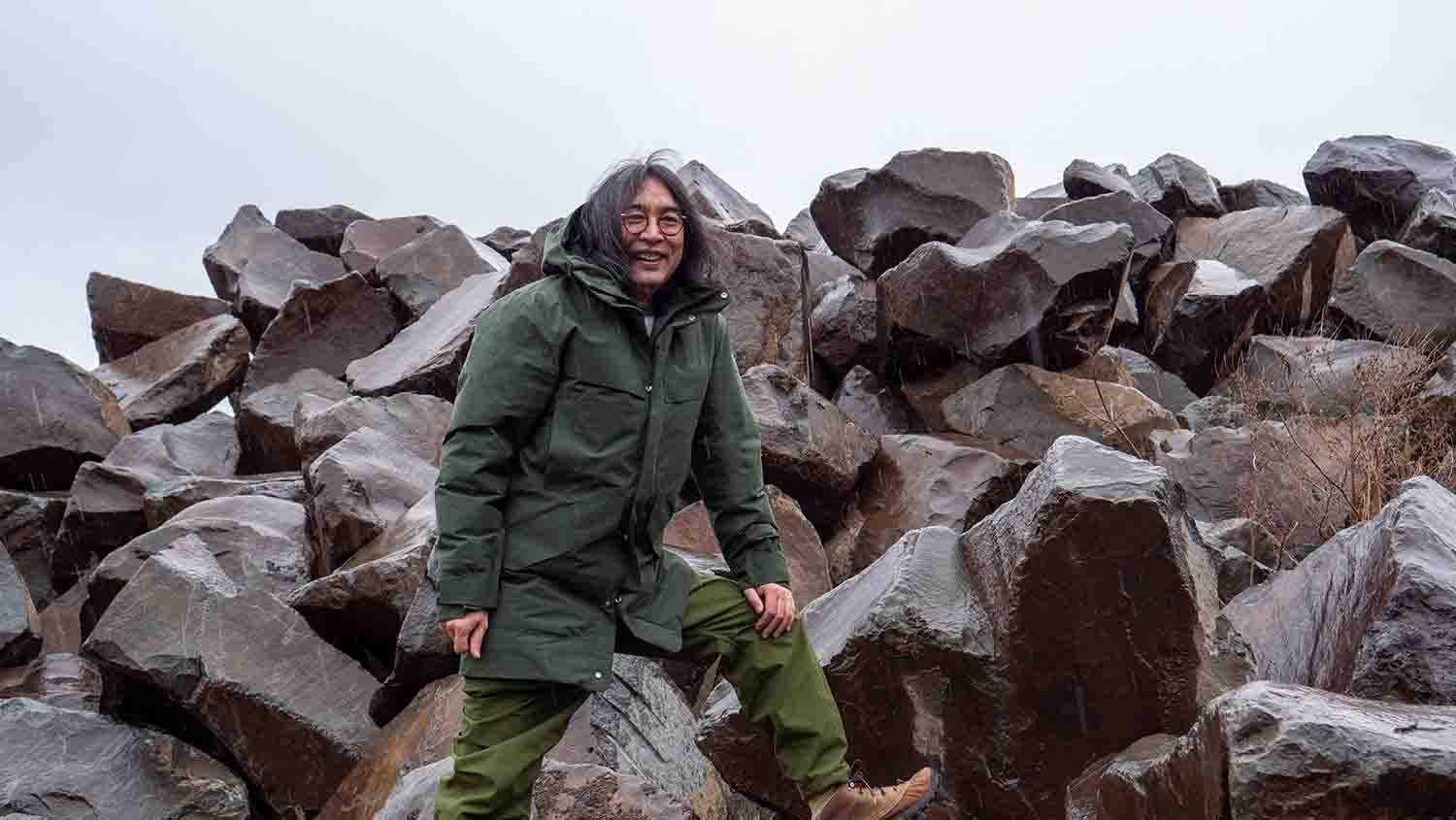 Izumi Kato searching for rocks at Mount Hakone, Japan, for his exhibition at Perrotin. Photo: Courtesy of Perrotin

Kato, who has been steadily building acclaim in Europe and the U.S. in recent years, found his calling in art instinctively, after rejecting the photorealist manner taught in Japanese art school. “I had to restart and think about the idea of what a drawing is. I started with stick figures and in the process these lines and dots came out. I wanted to have my own method. It was about returning to myself with a very childlike view.” After working in a number of different unsatisfying jobs, Kato eventually found his calling. “I thought, what do I want to do in my life, who am I? Asking myself these types of existential questions led me to return to art,” he explains. “It was a moment of realization that this is who I am.” 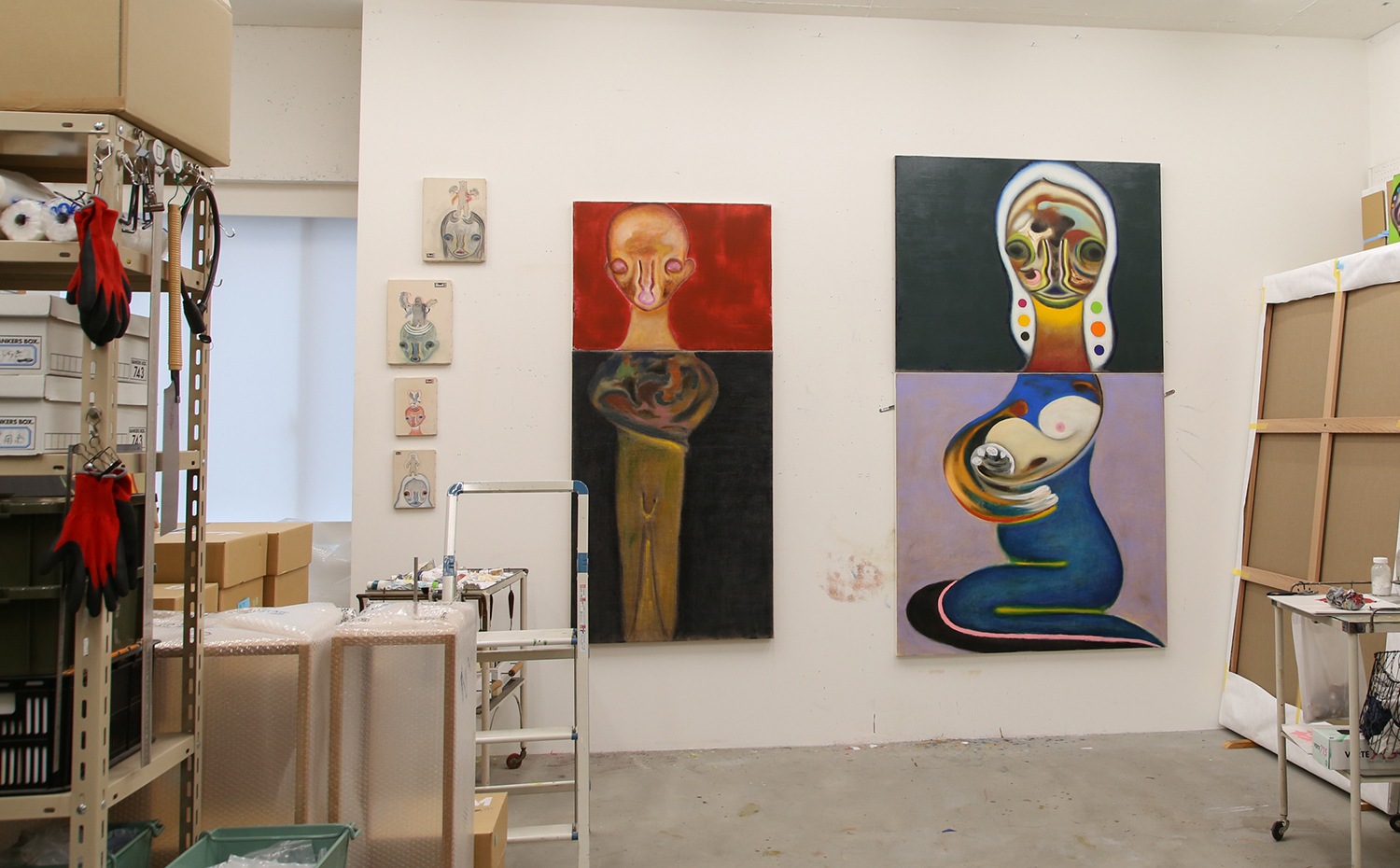 When not traveling the world for his exhibitions, Kato mostly works from his studio in Hong Kong, a space on the first floor of a fishing area. An avid fisherman himself, Kato brings these nautical influences into his practice, with fishing flags and knots used in the construction.“Fishing is my passion,” says the artist, whose eyes lit up at the proposal of a fishing trip in Red Hook, New York, even on a frigid early March morning. “I try to incorporate everything I enjoy into my work, naturally. I want it to be about joy.”

Izumi Kato is on view at Perrotin gallery in New York through April 17.