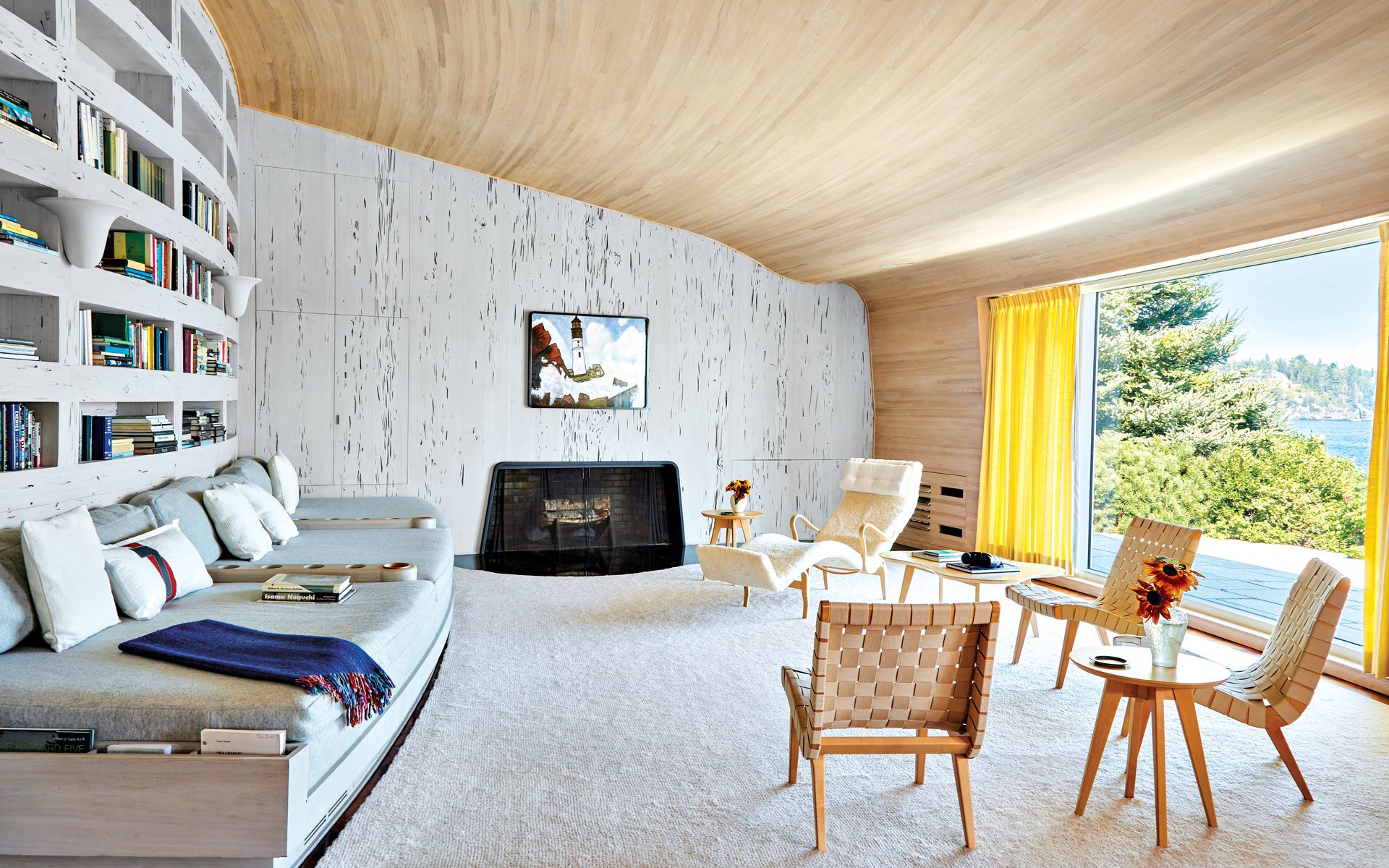 Inside a waterfront Maine home, conceived by artist Isamu Noguchi and architect Wallace K. Harrison for a scion of the Vanderbilt family
Photo: Tria Giovan 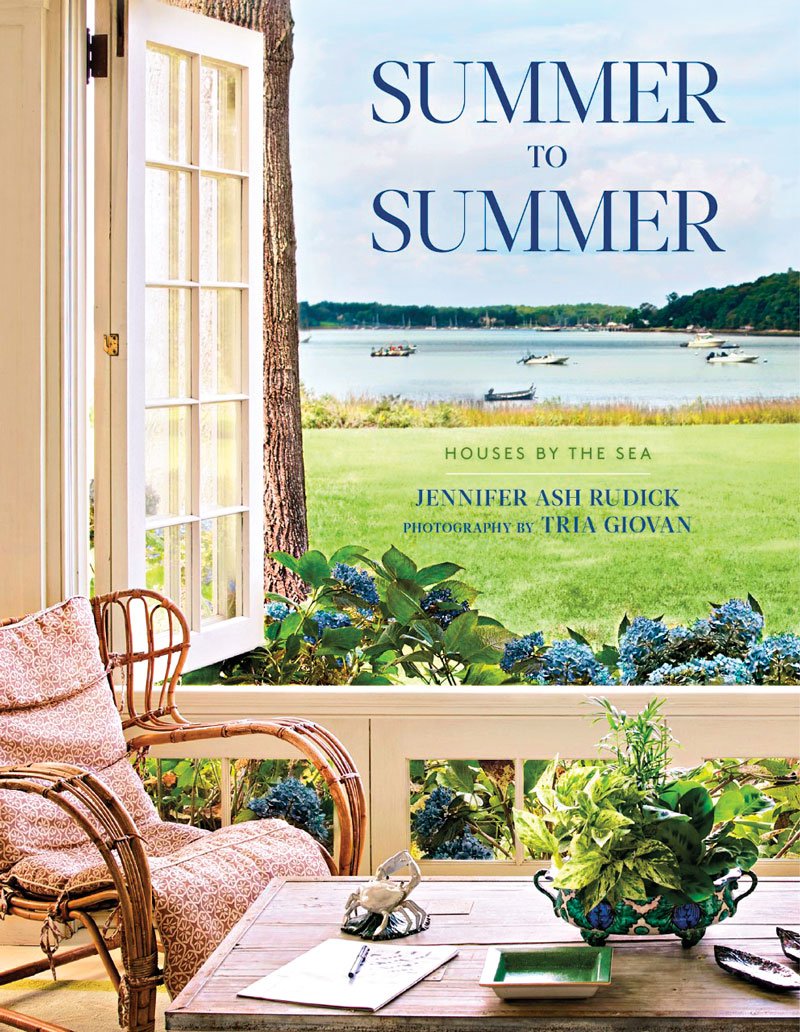 Artist Isamu Noguchi and architect Wallace K. Harrison’s 1940 design for a glass-and-birch house, the sinuous lines of which echo the Maine coast on which it sits, embodied the concept “site-specific” long before the term was popularized.

In the mid-1930s, Harrison, one of the lead architects of Rockefeller Center, the United Nations, and eventually Lincoln Center, and a champion of civic art, individual liberties, and the open exchange of ideas, commissioned Noguchi to create the 22-foot-high, stainless-steel bas-relief sculpture News for the lobby of 50 Rockefeller Plaza. Noguchi’s depiction of five journalists was unveiled to great acclaim, but it would be one of his last representational pieces before his work became more abstract and nuanced, a result of the artist’s growing obsession with void, change, and hope, after time spent in a Japanese-American internment camp. 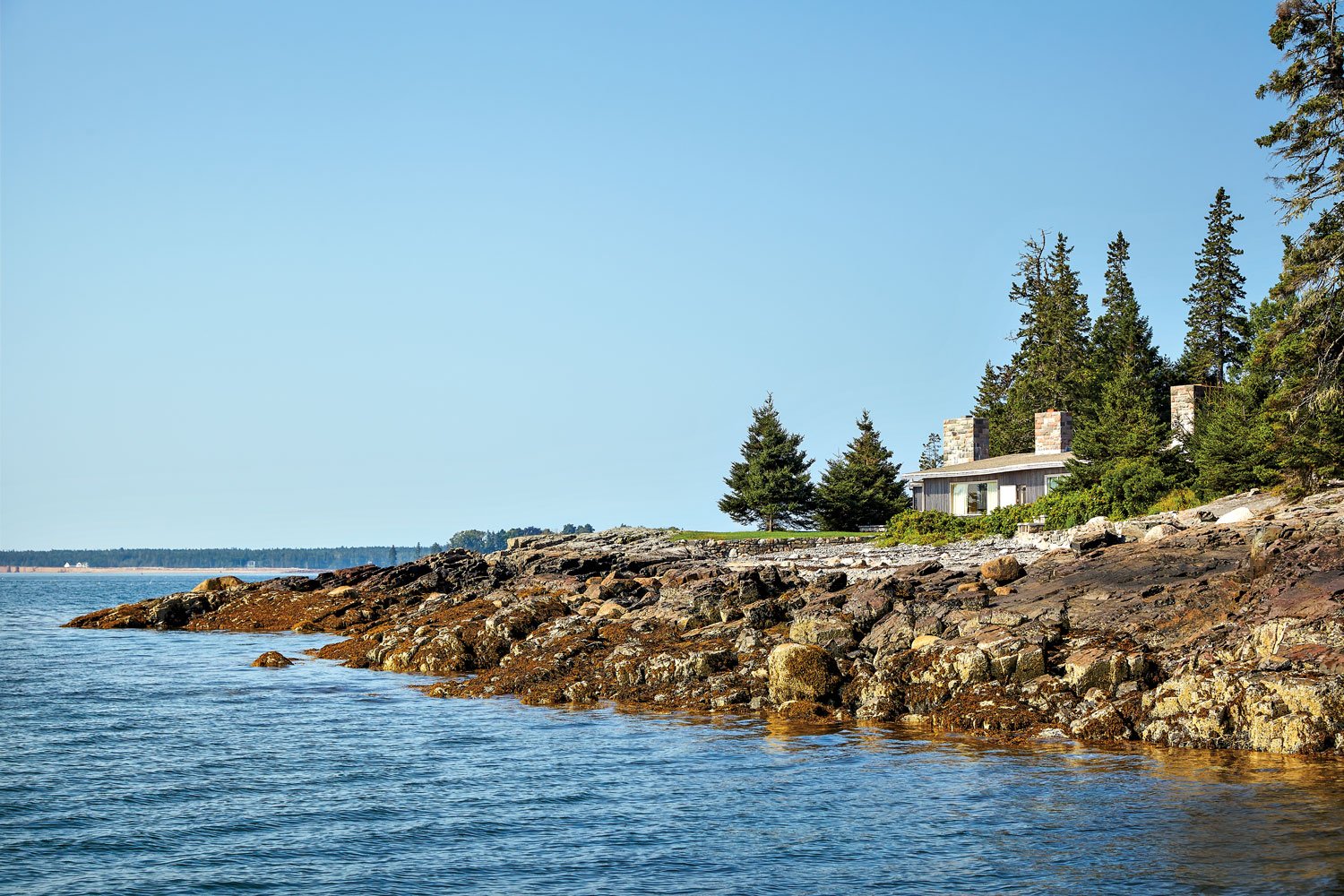 Sea Change, named after a line sung by the spirit Ariel in Shakespeare’s The Tempest, sits on a small peninsula jutting south from Northeast Harbor, a quiet village on the southern coast of Mount Desert Island. Photo: Tria Giovan

About 1940, William A.M. Burden, a scion of the Vanderbilt family, a president of the board of the Museum of Modern Art, and Harrison’s close friend, purchased a small peninsula jutting south from Mount Desert Island. He turned to Harrison and Noguchi with the directive to imagine something completely different from the area’s typical Shingle Style estates, a structure that would reflect their shared vision for a future of opportunity, individual freedom, and open discourse. Their response was a low-lying house tucked into the coastline that umbilically ties art and architecture with nature and shelter. 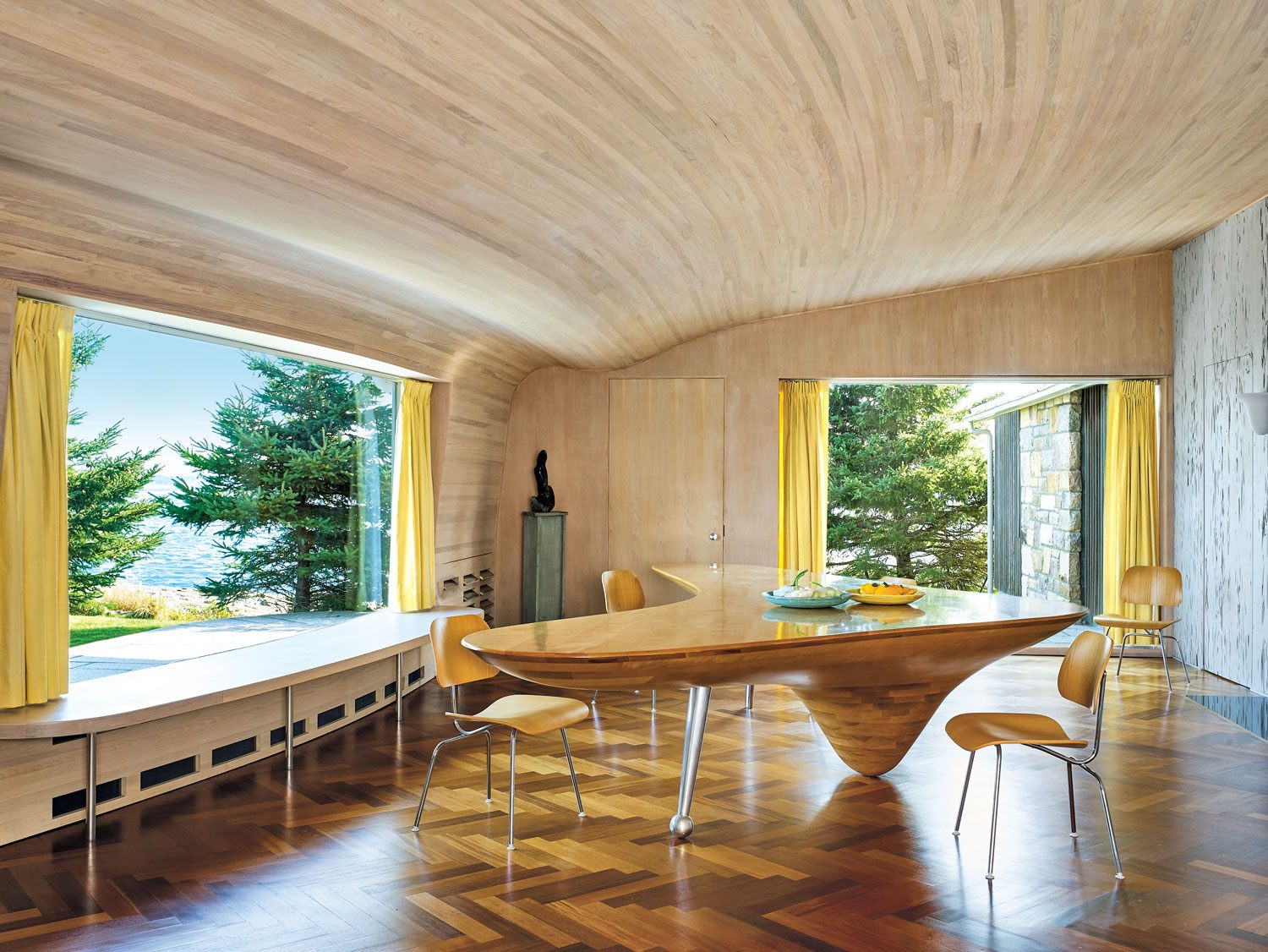 Isamu Noguchi designed the white beechwood table to resemble a ship’s hill. Burned in a fire in the late 1990s, the piece was re-created by sculptor and woodworker Mark Loftus. The vintage 1940s chairs are by Charles and Ray Eames. Photo: Tria Giovan

Upon entering, one is immediately struck by the panoramic view through enormous picture windows of the rocky shoreline and Somes Sound beyond, where the horizon is broken only by a small, pine-covered island. A large, open living and dining area curves like an ocean wave and has walls of gray-stained pecky cypress, as well as an undulating ceiling. A dining table shaped like a ship’s hull continues the sea theme.

Artist Isamu Noguchi and architect Wallace K. Harrison’s 1940 design for a glass-and-birch house embodied the concept “site-specific” long before the term was popularized

In 1996 Ordway Burden, the youngest of William and Margaret Burden’s four sons, and his wife, Jean, inherited Sea Change; shortly thereafter, however, it burned to the ground. Having spent almost every summer of his life there, Ordway felt deeply connected to the house, and Jean, who had studied architecture, was in awe of Harrison and Noguchi’s collaboration. “The place kind of seeped into my skin,” she told the New York Times. She set about rebuilding, guided by the research of Elizabeth Dean Hermann, an architectural historian, who thankfully had been studying the house, and the photographs of her husband, architect Heinrich Hermann. “I thought I understood the genetic code of the building,” Heinrich admitted in the same New York Times article. 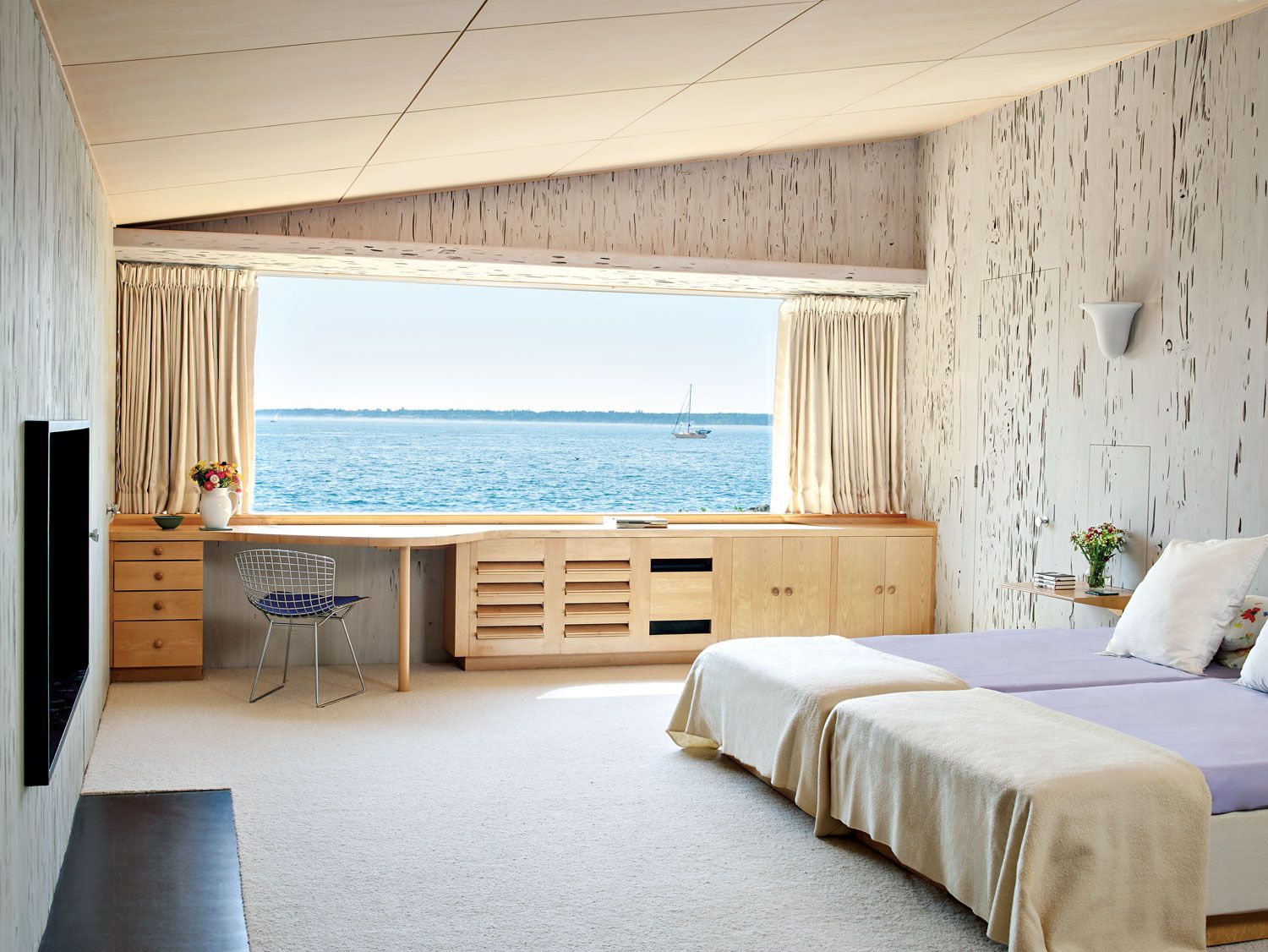 In the master bedroom, the walls are pecky cypress. The built-in cabinetry has the sleekly efficient look of an ocean liner, and the curved form of the desk reflects the shoreline beyond. Photo: Tria Giovan 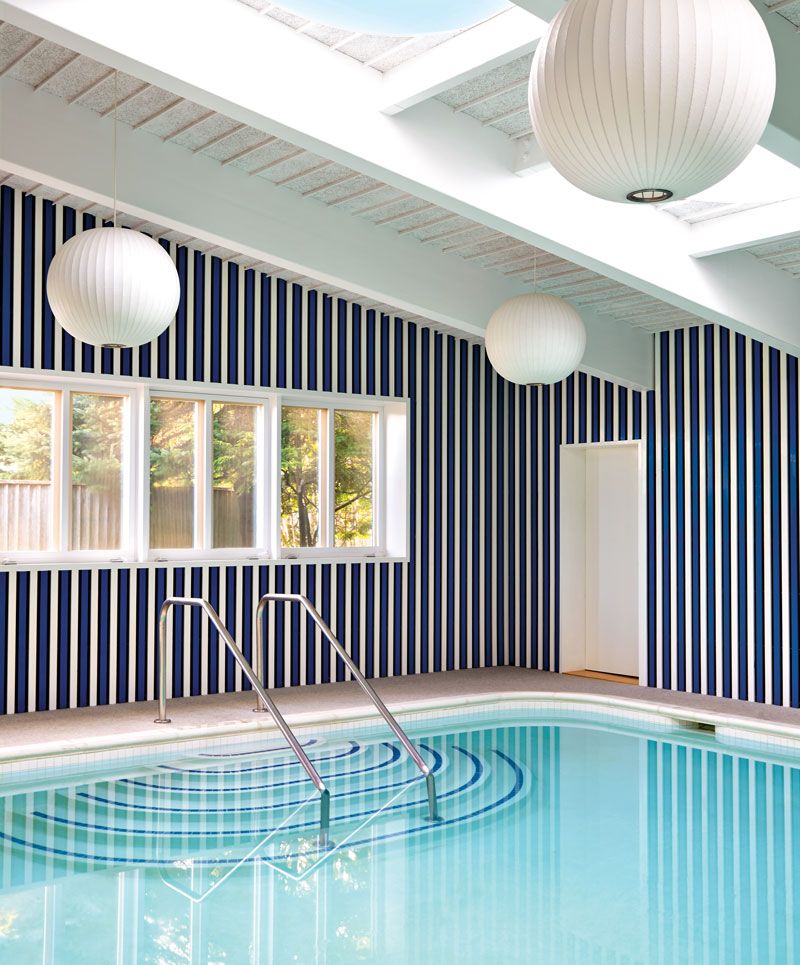 An indoor swimming pool was added in 1960. Photo: Tria Giovan

Those who have been to both the original house and Jean Burden’s reconstructed version cannot tell the difference, a testament to her singular determination to preserve a timeless, if unique, design. In 2009 the house was listed on the National Register of Historic Places, which notes its exceptional modern architecture and a rare Harrison design outside of New York.

A version of this article first appeared in print in our 2020 Summer issue under the headline “Maine Attraction.” Subscribe to the magazine.

Cover: Inside a waterfront Maine home, conceived by artist Isamu Noguchi and architect Wallace K. Harrison for a scion of the Vanderbilt family
Photo: Tria Giovan
Next Post