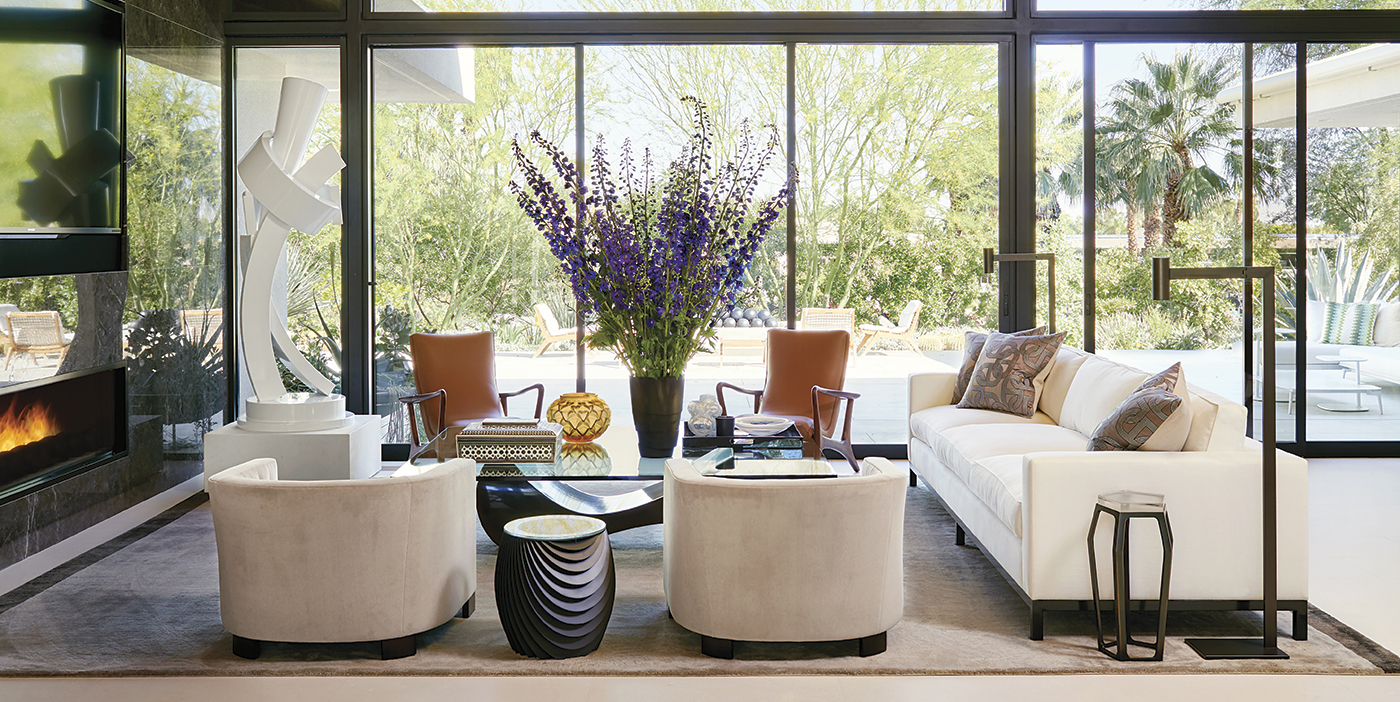 The living area contains a sculpture by Guy Dill, club chairs by A. Rudin, a pair of Vladimir Kagan armchairs, and a cocktail table by Henry Royer.
Photo: Trevor Tondro

The midcentury-style residence was recently revamped For most of their lives, Rita and Ralph Rudin have found refuge in the Southern California desert. As a boy Ralph, now the third-generation owner of the Los Angeles furniture manufacturer A. Rudin, vacationed with his family at the sleek midcentury motels of Palm Springs. Rita, who was born in Mexico but moved to California when she was nine, has happy memories of decamping to the desert as a teenager on spring break. In the early years of their marriage, the couple and their two young sons would unwind with Ralph’s parents at the elder Rudins’ getaway in Mission Hills.

Later, golf would bring them back. A few years ago, friends from Los Angeles (where the Rudins live in a 1930s Georgian-style home) invited the couple to a member-guest tournament at the Vintage Club in Indian Wells, a 712-acre oasis known for its two Tom Fazio–designed 18-hole courses. Before long they were house hunting at the club, which was developed in the early 1980s and has a membership list that reads like the Forbes 400. The property that caught the Rudins’ attention had been remodeled in a somewhat outré southwestern vein—vigas, curving interior walls, a color palette leaning to dusty pinks and mauves—but “the architecture was basically midcentury,” Rita explains. “The bones were there.” So were the views: Every room in the house looked out on the pool, the golf-course lake, or majestic Eisenhower Mountain. “We might as well” was the guiding spirit of the renovation efforts, according to Ralph, but the refined results belie that modest description. The couple brought in Silvia Kuhle and Jeffrey Allsbrook of the Los Angeles architecture firm Standard to simplify the interiors and open the rooms to the outdoors. In the main living area, the architects removed soffits and interior walls to reunite the space with the front courtyard and back terrace; installed limestone floors inside and scored-cement paving outside; and reconstructed the living area’s high-pitched ceiling, clad in ipe, under a skylight—a nod to the ceilings at Sunnylands, Walter and Lee Annenberg’s A. Quincy Jones–designed estate in nearby Rancho Mirage. The open kitchen features a light fixture by John Pomp Studios and Risom chairs by Knoll; the refrigerator is by Sub-Zero. Photo: Trevor Tondro

“A lot of the work was about which materials to use to underline this idea of an indoor-outdoor house without being retro,” says Kuhle, “to bring it into 2017.” The architects also employed ipe—one of the most durable woods and often used for exterior decks—in the kitchen and bedrooms. Meanwhile, pale marbles and quartzes have a softening effect on the countertops and fireplace surrounds.

Feathering their desert nest was not a challenge for the Rudins, whose company, after all, has furnished many homes in the area. Most of the appointments were crafted by A. Rudin or the firms it represents: clean-lined designs in wood and upholstered pieces in sandy-hued linens and other textured materials. A sprinkling of midcentury-modern classics—an Eames lounge here, a Kagan armchair there—underscores the general mood of timelessness. “We wanted it to be very minimalist and quiet and natural,” says Rita. The one touch of bling is a starburst Swarovski-crystal chandelier in the dining room, by Lobmeyr, the famed Viennese glass manufacturer, originally designed for the Metropolitan Opera House in the 1960s.

Glass doors open to generous terraces in front and in back, where the Rudins do most of their entertaining (their sons, now grown, are frequent guests). Rita, a hands-on gardener, has been “playing with the idea of a desert landscape but planted more in the English style,” she says. Naturalistic borders of agave, barrel cactus, and paloverde, studded with desert boulders, flank the pool and the lake—a sanctuary for geese, herons, and ducks in the winter. The master bedroom is outfitted with a custom-made stamped-leather headboard and parchment-clad nightstands; the lamps are by Nahoor, the bedding is by Frette, and the lithographs are by Tacita Dean. Photo: Trevor Tondro

This serene setting forms the backdrop to a striking collection of contemporary art. The Rudins are especially keen on established Los Angeles artists such as John Baldessari, Billy Al Bengston, and Guy Dill, who personally installed Hayden, the swooping metal sculpture he made for a corner of the living room. Vibrant works by Frank Stella, Robert Rauschenberg, and Julian Schnabel are also on display. A silk-screen print from Andy Warhol’s “Flowers” series hangs in the powder room, which is clad in backlit green onyx.

A wall in one of the guest rooms is given over to Slim Aarons’s famous 1970 photograph Poolside Gossip. The scene it depicts—two women sporting lacquered coifs and slinky midriff ensembles chatting by the swimming pool outside Richard Neutra’s Kaufmann House in Palm Springs—is a bit rarefied in comparison with the desert lifestyle of  the Rudins, whose favorite houseguest is their “granddog.” But it also serves as a reminder that they’re living the good life, Southern California variety, on their own terms.

Cover: The living area contains a sculpture by Guy Dill, club chairs by A. Rudin, a pair of Vladimir Kagan armchairs, and a cocktail table by Henry Royer.
Photo: Trevor Tondro
Next Post