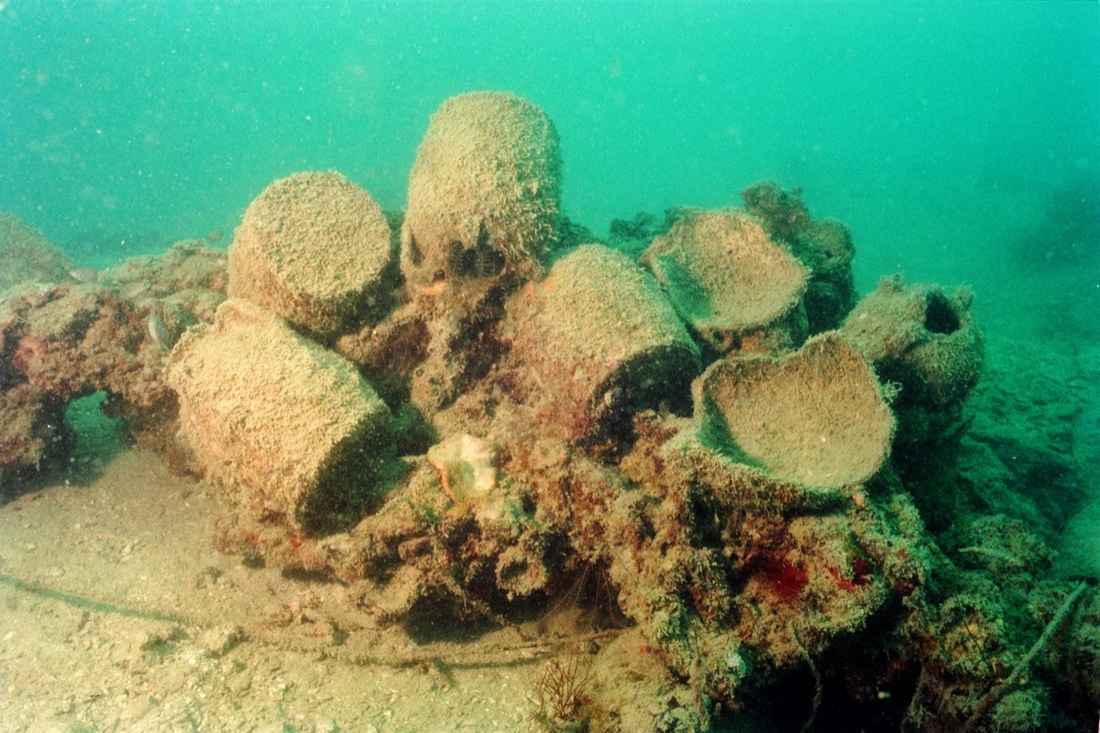 Treasures From a 1,200-Year-Old Shipwreck Go on View

The stars of a 60,000-piece trove found under the sea are on display at the Asia Society in New York

In the 9th century, an Arabian trading ship, or dhow, sailed out from the Middle East to China laden with expensive spices and incense. It sailed back filled with all sorts of exotic treasures from beautiful blue-and-white ceramics to solid gold dishes, and a smattering of ivory game pieces. For reasons still a mystery, the ship went thousands of miles south off course and sunk in the shallow waters of the Java Sea off Indonesia. Changsha ewers trapped in a coral concretion on the top of the wreck mound. Photo: Courtesy of Asia Society Museum. Photo by Michael Flecker.

Over a millennium later, in 1998, divers searching for sea cucumbers uncovered the wreckage, a dazzling trove of more than 60,000 objects which has remade scholarship on topics ranging from ancient trade policy to the history of porcelain.

Now, the shipwreck treasure, the biggest single collection of artifacts from the Tang, travels to America for the first time.

“Secrets of the Sea: A Tang Shipwreck and Early Trade in China” at the Asia Society Museum opens March 6 and is on exhibition at the Park Avenue institution through June 4. It’s the splashiest show from the “new” director Boon Hui Tan who moved from Singapore to helm the museum in late 2015.  For Tan, a show on trade, or migrating objects, is particularly well-timed in the current political climate. The exhibition shows that globalization is not a modern-day phenomenon, he notes, adding “a lot of art objects are border-crossers, they leap across boundaries.”

Visitors will get a sense of what life was like during the Tang Dynasty (618-906), perhaps the most glamorous and cosmopolitan of all the Chinese dynasties, and notable for the rise of a social class outside the aristocracy, great cultural achievements, splendid design, relative peace and elaborate, luxurious dress. (The Asia Society will mark the exhibition with a Tang Dynasty Ball April 27.) But perhaps what is most remarkable is the actual condition of the objects. Tan says, “The ceramics, for example, were packed away in snail-like jars” that protected them from damage by currents, salt, and sand – a tour-de-force of conservation technology. Thanks to this preservation, much to the delight of porcelain scholars, the wreck revealed the earliest known intact underglaze blue and white dishes 100 years earlier than people expected. First exhibited in 2005 in Singapore, which purchased the contents from the private commercial excavation company, the treasures were scheduled to go on display in 2011 at the Sackler Gallery in Washington, D.C. However, a group of archeologists had protested because of the way the excavation was carried out without the assistance of academics—a controversy that forced the museum to pass on it.

Nevertheless, Tan believes that it is important for U.S visitors to be able to see this incredibly important archeological find. “The U.S., compared to Europe, has a pretty narrow view of Asian art,” notes the director, who also serves as vice president for global arts and cultural programs for all 12 of the Asia Society sites. He says he hopes his shows at the institution will change that. A summer exhibition in New York, for example, in collaboration with the Smithsonian and the Queens Museum, will highlight contemporary art by Asian artists born in America. “We are trying to send a message that even though they are immigrants they are American artists,” he says. The show will open the July 4 weekend.