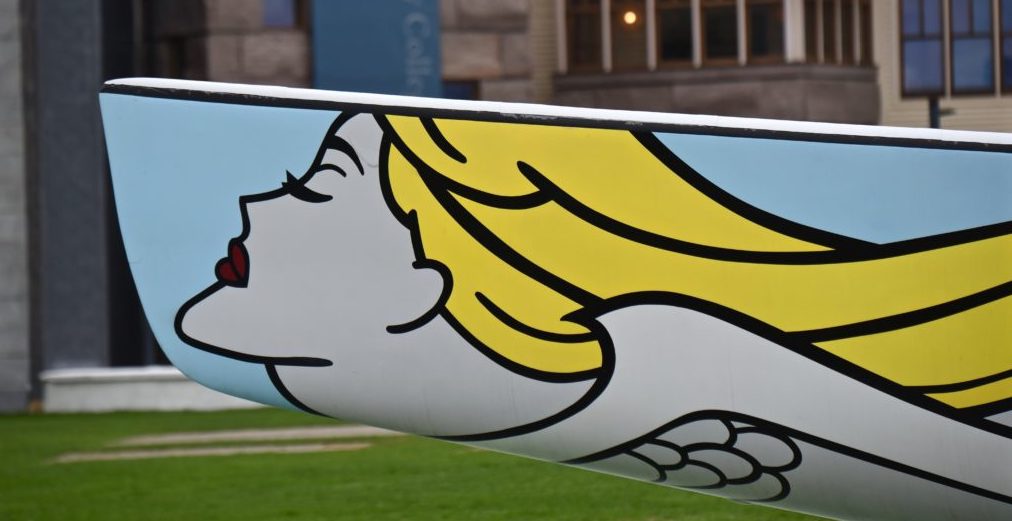 One of Lichtenstein’s largest and last works was a seventy-seven foot hull, now on display in Vermont

On May 26, the America’s Cup begins in Bermuda, with the U.S. as defending champion. In 1994, the pop artist was commissioned to create a custom artwork for skipper Kevin Mahaney, a U.S. Olympic medalist in the 1992 Barcelona games. Not your traditional artistic commission, Lichtenstein donated the America’s Cup boat design in exchange for a nationwide children’s arts education program funded by corporate sponsors. It would have otherwise been prohibitively expensive—a multimillion-dollar project. (The whole campaign in today’s dollars would have been around $45 million, notes Mahaney.)

The boat, dubbed “Young America,” is decorated with the Lichtenstein artwork Mermaid, which features an undulating blonde with a grey fishtail moving gracefully through waves. The first and only time a boat in the America’s cup was designed by an artist, the idea was to inspire young people. Mahaney, an art collector and patron at Middlebury, his former college, says when he first met Lichtenstein to discuss the boat project he brought his children along. And when Lichtenstein lay down on the studio floor to do crayon drawings with them, he knew he had found the right man for the cause.

The collector owns the first sketch Lichtenstein did of the Mermaid and it is also on view in the exhibition along with other preliminary works, a series of models, as well as the premiere of a 2017 film by Theodore Bogosian, who documented the artist working on the commission and the race itself. Mahaney says he likes to collect art from sketch through to the finished product, by such artists as Sarah Morris and Richard DuPont, to illustrate to students how much effort is involved in artmaking. In the case of Mermaid, for example, the artist tweaked the chin of the mermaid over and over to get it right.

Richard Saunders, director of the Middlebury College Museum of Art, says the tale of “Young America” is “a great story” and the show is a highlight at the museum this summer. (Famous art-world graduates of Middlebury include Richard Gober and art dealer Marianne Boesky, and art is the 4th most popular major at the school of 2,600 students, notes Saunders.) The exhibition marks the first time the original hull, sketches, and small-scale models are brought together in 25 years. Photo: Courtesy of Storm King

The seventy-seven foot hull, which has been displayed at Storm King in Mountainville, New York since 2003, is currently poised spectacularly above a pond on the campus. It will then travel to Newport, Rhode Island, for a pop-up exhibition this fall, says Mahaney, before hopefully heading to the Whitney Museum of American Art, where the project was first announced a quarter-century ago. Design for the spinnaker loaned by the Osaka City Museum of Modern Art, Japan. Photo: © Estate of Roy Lichtenstein

The sail, or spinnaker, also designed by Lichtenstein—a glorious sunburst design—has been missing since the race. In the hopes of displaying the hull and sail together, Mahany is offering a $25,000 reward for its return.

And while “Young America” didn’t win in 1995—an America’s Cup that is controversial and debated to this day—Mahaney still plans to head to Bermuda to catch some of the races.

“Young America: Roy Lichtenstein and the America’s Cup” is on at the Middlebury College Museum of Art through August 13. museum.middlebury.edu