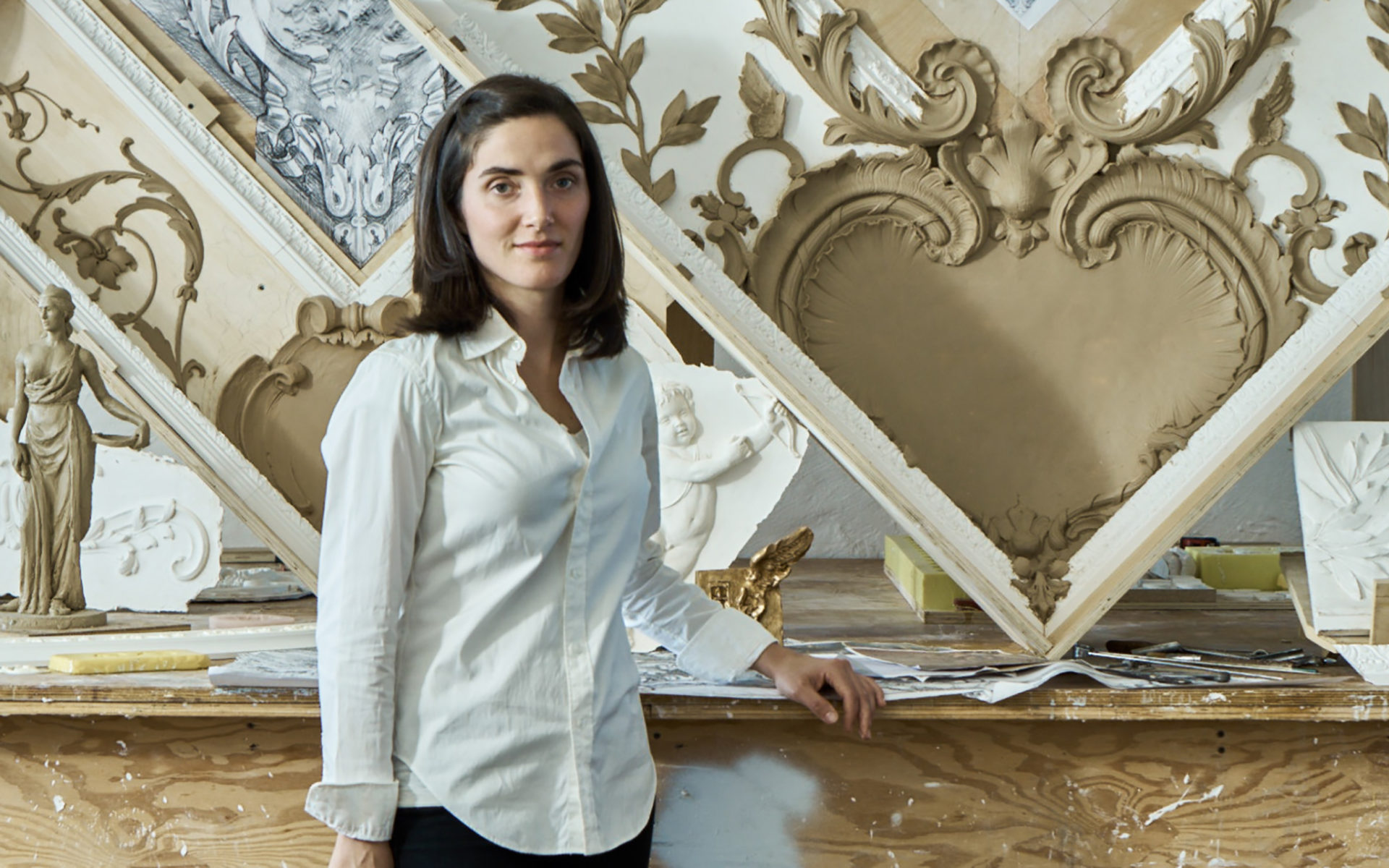 An almost maternal glow comes over Emily Bedard as she walks around her Brooklyn studio discussing the group of 18 bas-relief cherubs she’s creating for a 120-year-old Boston residence. And with angelic patience, she describes to a visitor how an 11-foot ceiling medallion she designed for the living room of a Houston home will be realized, from sculpting the elements in clay to making rubber molds and casting each piece in plaster to eventually assembling the whole thing on-site. Get her started on cartouches, lunettes, entablatures, and porticoes, and she can make your head spin. In a good way.

A study in clay for an acanthus-leaf rinceau, which was later used for a library ceiling. Photo: Courtesy of Emily Bedard

As the creative director of Foster Reeve & Associates, a firm that specializes in the traditional art of ornamental plasterwork, Bedard is a darling of architects such as Robert A.M. Stern and Peter Pennoyer, who says she has “the uncanny ability to instill architectural elements with a vitality and sensuous presence.” Her talent for sculpting exquisite acanthus scrolls, laurels, volutes, and egg-and-dart motifs has also won her high-profile clients like Mark Wahlberg, Oprah Winfrey, Uma Thurman, and Yoko Ono. After earning her BFA in figurative sculpture from the Lyme Academy College of Fine Arts in Connecticut in 2009, Bedard got on-the-job training in plaster ornamentation working for companies such as Pink House Studios in Vermont and Hyde Park Mouldings on Long Island, then deepened her knowledge by taking courses at New York’s Institute of Classical Architecture & Art. Her career path has definitely not been that of the average BFA grad, and she comes across as something of a no-nonsense, soft-spoken maverick, whose heroes include architect Stanford White and sculptors Augustus Saint-Gaudens and Frederick Fletcher French. “Modern art can be alienating, but classical art is very accessible,” she says. “It inspires people, even people who don’t think of themselves as artsy. I want to reach a large populace.” Bedard gets ideas for her designs from a wide library of books as well as direct observation. “I’ll just go to the New York Public Library or to museums,” she explains—as long as they are buildings from the so-called American Renaissance of the late 19th to early 20th century, her favorite period. “I like to sit there and just absorb the space.” It’s one thing to love classical architecture that much, but quite another to breathe new life into it through one’s craft with such spirited conviction. fraplaster.com