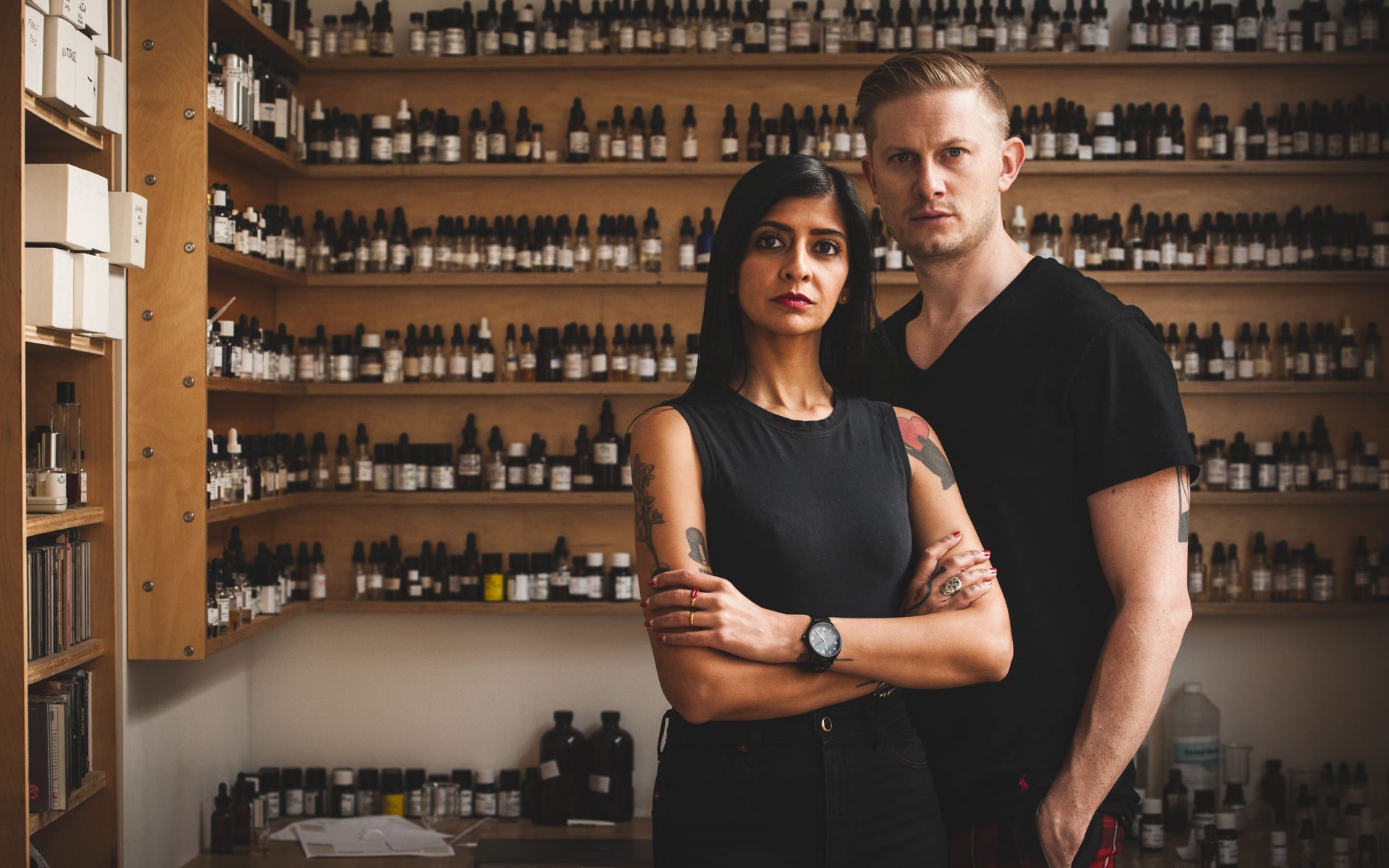 Brooklyn couple David Seth Moltz and Kavi Ahuja Moltz first began crafting perfume as a hobby in 2008, doling out custom fragrances to friends as holiday or birthday gifts. “We bought a distiller to make our own citrus oils,” Kavi explains. “And David got these old Victorian beauty handbooks on how to concoct facial tonics. We started doing every little thing ourselves.” Their home-brewed passion project quickly bubbled into a full-blown business, christened D.S. & Durga, which is now stocked on the shelves of Barneys New York and involved in partnerships with the likes of beauty mogul Linda Rodin.

David, a longtime musician and self-taught perfumer, is the nose of the operation, while Kavi handles the design. (She spent years working as an architect, lauding the “language of design” as the greatest takeaway from her training.) This is evident in the brand’s packaging: Simple and transparent, the sculptural bottles often feature a thick cutout, which lends depth and a certain substantial quality. “Because it’s so serious and heavy, we added a little whimsy,” she says. “The logo on our box is tilted in this funny way. It was decided at the last minute, and that’s what we love about it.” Visitors can sniff the D.S. & Durga’s full range of fragrances and scented candles every Saturday, when their Bed Stuy studio is open to the public. One popular and musky perfume, titled “Bowmakers,” harkens back to the violin shops of the 1800s, with notes of violin varnish, mahogany, aged walnut, and amber pine rosin. “The pioneer valley of Western Massachusetts is the first place that Americans started making their own instruments,” David explains. “At that time, no one thought of us as any sort of musical hotspot in the world. And then, within 100 to 150 years, the gift that we had given to the world was music in blues, jazz, rock and roll. That magic is somehow embodied in where these violin shops are.” In June, they will roll out an innovative fragrance enhancer named “I Don’t Know What,” a nod to the French je ne sais quoi. With top notes of bergamot, its magic is to enhance any fragrance or raw material, but it may also be worn as a warm, citrusy fragrance. The duo also plans to open a brick-and-mortar outpost near their studio-showroom next year, and Kavi will have a close hand in the design of the space. Until then, David has a running list of names and stories tucked away on his phone, which he hopes to one day distill into perfume form. dsanddurga.com