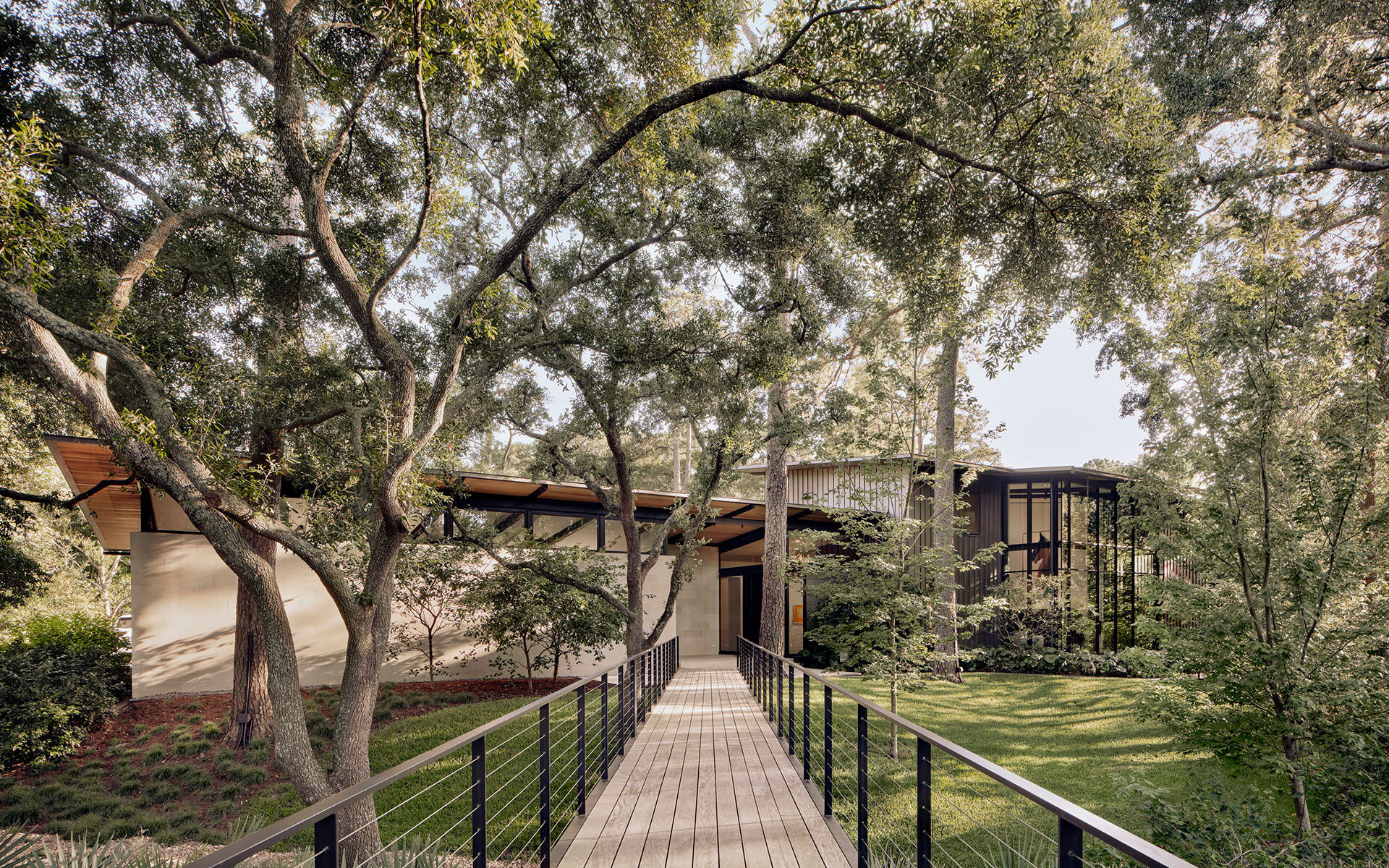 Most architects will attest that the site dictates the structure, conceiving buildings that maximize the natural light and breathtaking vistas while elegantly navigating the land’s more challenging hurdles. Working with a client who had purchased a nondescript 9,000-foot-home on a bucolic two-acre plot in Houston, the team at Lake|Flato Architects took the landscape’s most difficult attribute—a deep ravine that leads into the city’s Buffalo Bayou—and turned it into one of the residence’s most striking features. 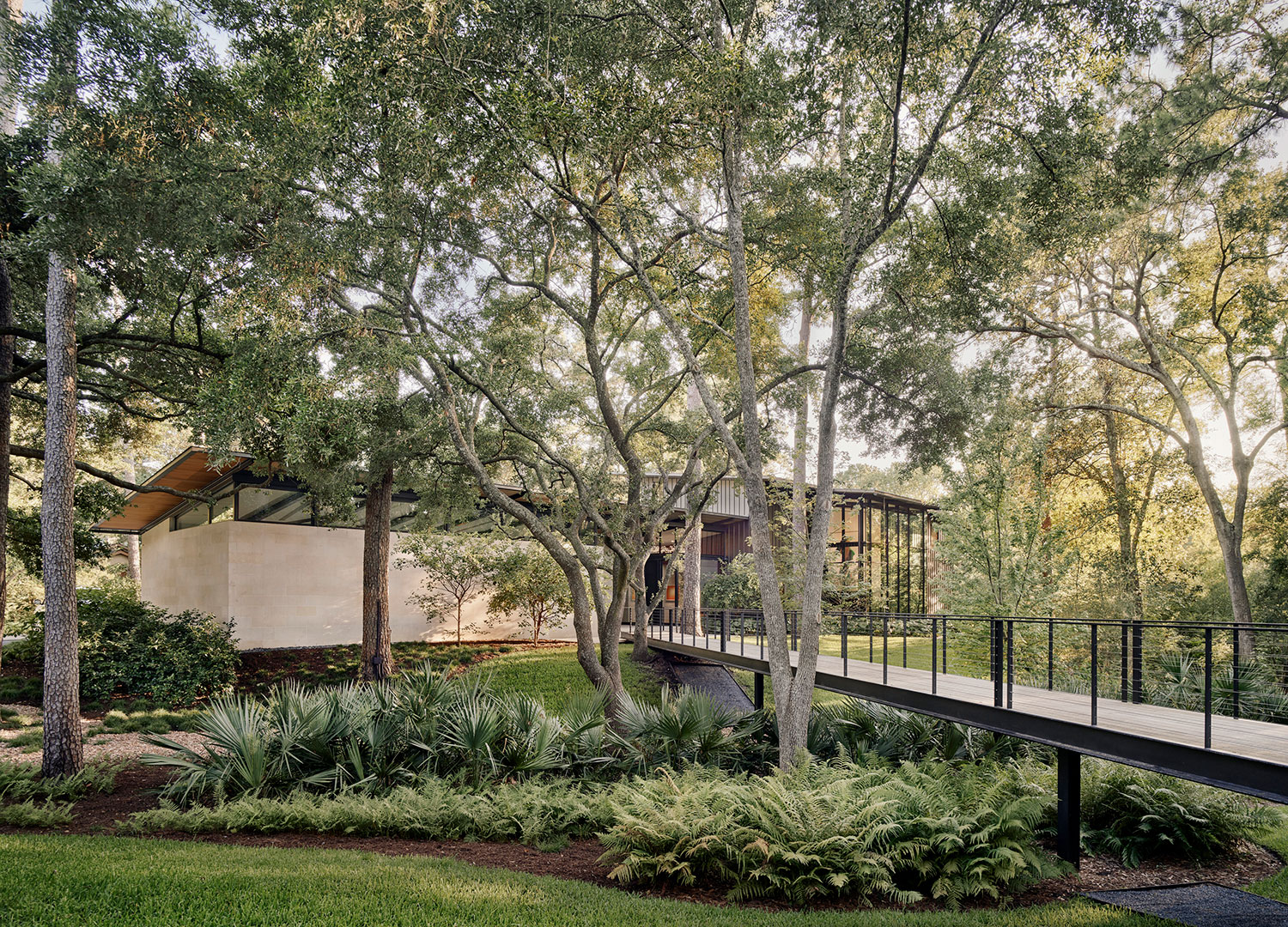 After deconstructing the current house and donating its pieces to Habitat to Humanity, Lake|Flato set out to build an airy, modern “New York meets Houston” residence on the original footprint, preserving the towering trees and lush greenery that first attracted the homebuyers. A dramatic car bridge that traversed the arroyo was replaced with a “similar in spirit” steel pedestrian bridge. “They really wanted a house that leveraged this special landscape, so the only way to do that was to do something new and fresh,” says Lake|Flato founder and partner Ted Flato, who included the project, named the Bridge House, in the firm’s newly released monograph Lake|Flato Houses: Respecting the Land (Rizzoli). “The whole experience begins on this bridge. The land is the forecourt and the house starts unfolding.” 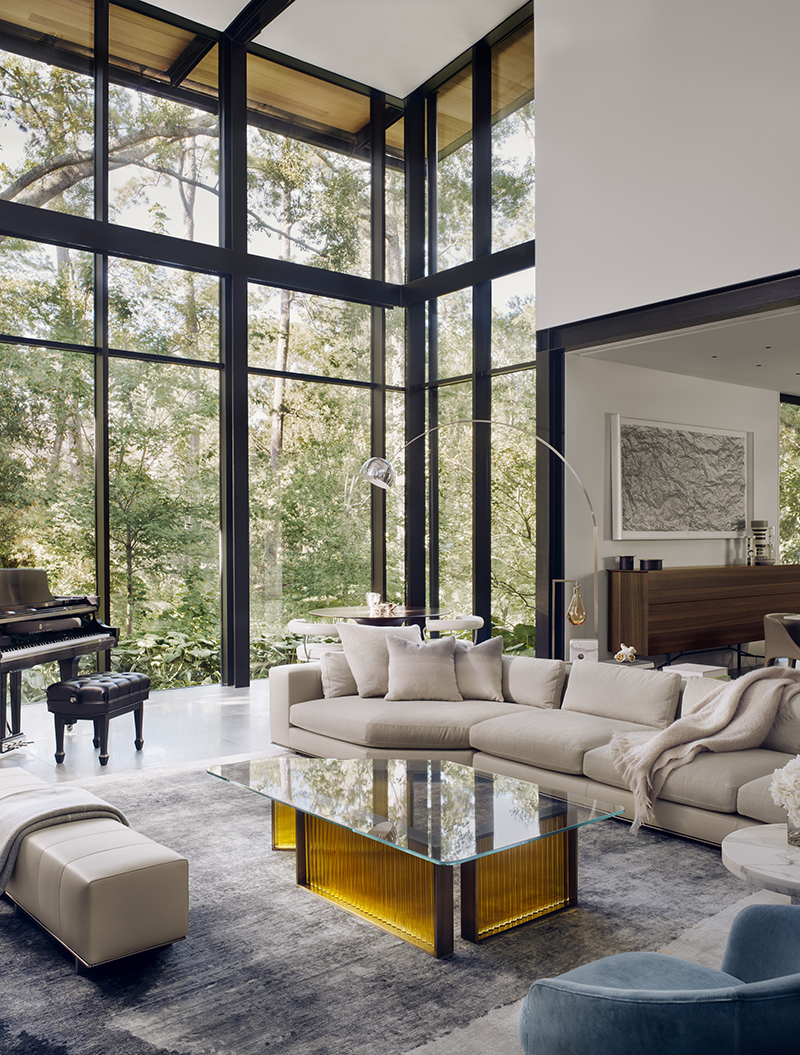 A large Minotti sofa upholstered in a Holly Hunt fabric is paired with a custom glass cocktail table in the living room. The bench is by Minotti and a Bulb dining table by Eric Schmitt and Patrick Naggar Bubble lamp from Ralph Pucci create a pleasing seating area by the double-height windows. Photo: Casey Dunn

In planning the actual house, the clients wanted a primary residence that had the tranquility of a year-round retreat, with voluminous light-filled spaces such as the soaring double-height living room with a floor-to-ceiling glass bump-out that protrudes out into the landscape. “If you were to describe the most important thing in this house, it’s really this one grand space that reaches out into nature physically and becomes this wonderful glass window to the landscape,” says Lake|Flato associate Vicki Yuan.

“The structure and the choices of materials, all of those thing are part of the joy of making a house”

Up above, a skybridge nods to the notable exterior feature as well as the materials that define the building itself, including blackened steel and wood. While offering a striking route to the children’s upstairs bedrooms, the interior bridge also creates a breathtaking aerie for viewing the large scale works of art, including canvases by Katharina Grosse, Alyson Shotz, and Cleve Gray. “Much like some of the great museum spaces, you’re walking by art at a lower ­level and then also at an upper level and then encountering the art and the land all at the same time and from different angles,” Flato says. “That is part of the delight of the house.” 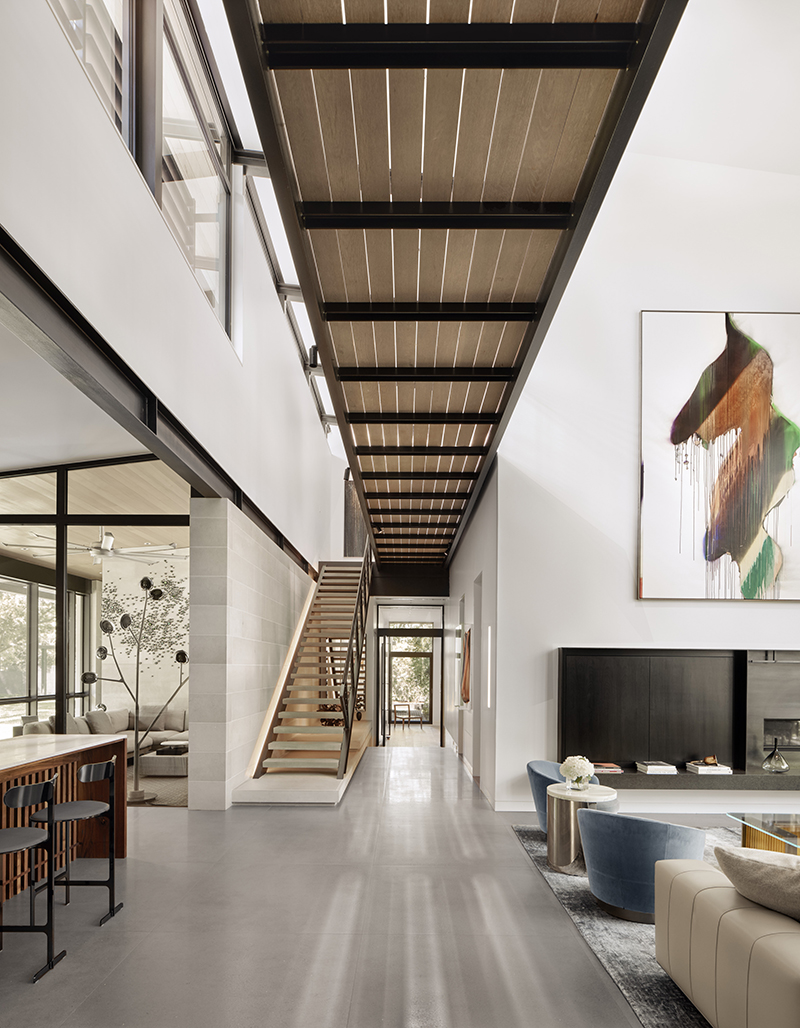 Tall blank panels that allowed room for large-scale canvases, including this colorful canvas by Katharina Grosse, that can be appreciated from below as well as up high as the clients traverse the interior skybridge. Photo: Casey Dunn

Feature walls made using oiled walnut wood repeat throughout the home, both in the dining room and in the main bedroom, continuing the connection between indoors and out. Rottet Studio’s Lauren Rottet picked up the same detail in several custom pieces including a bespoke kitchen island. “Our work was about bringing the outside even further in, so it truly felt inseparable,” says Rottet, who filled the spaces with pieces that have a reflective surface or are translucent, like a custom cocktail table. 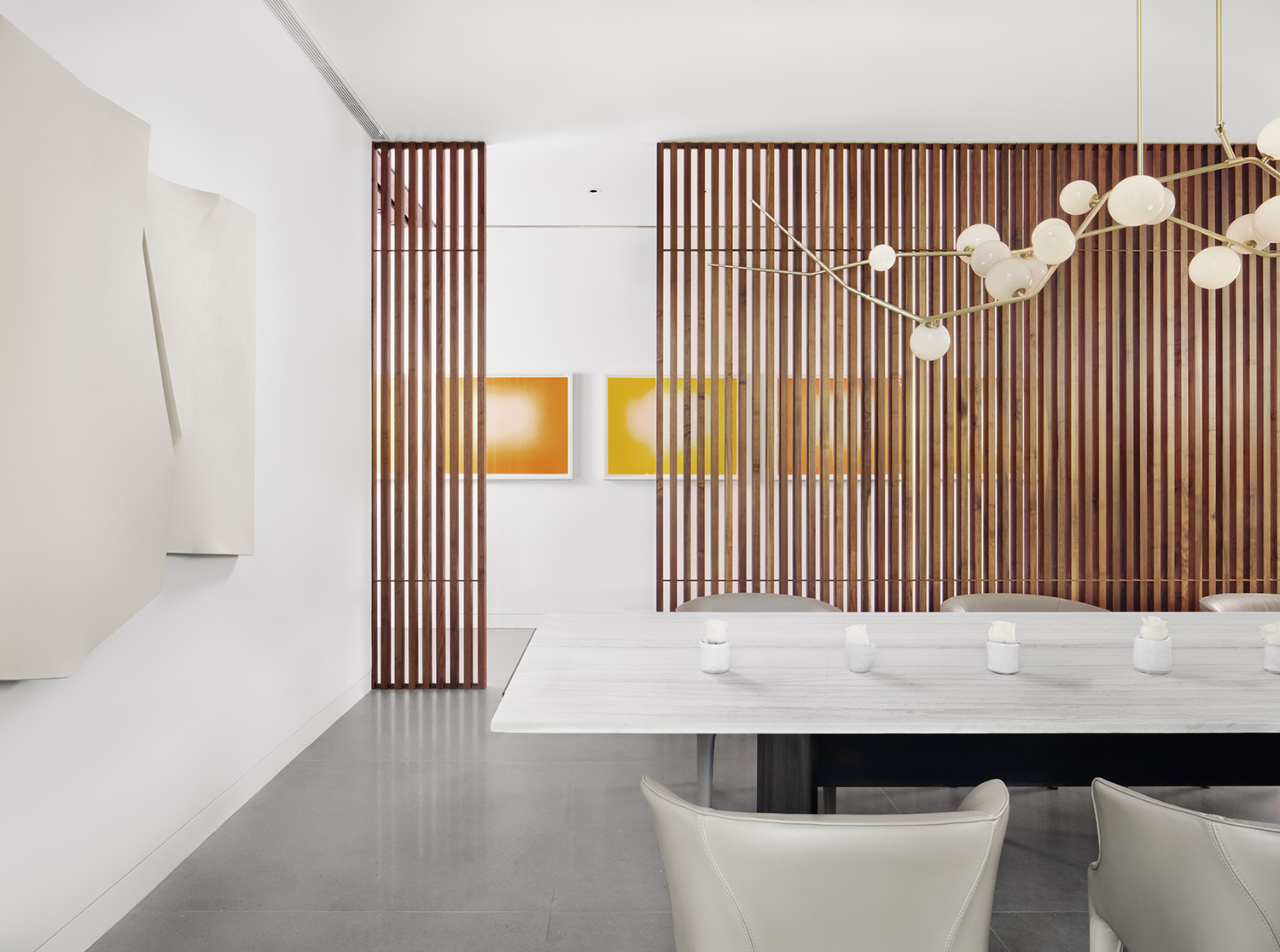 A series of works on paper by Anish Kapoor is visible through the custom wood panel, created to echo the vertical slats on the home's exterior. The large-scale sculptural canvas work is by Houston artist Eduardo Portillo. Photo: Casey Dunn

Furniture also helped define various zones in the open main floor, most notably between the living and breakfast rooms, where a custom bar serves as a work station during the day but transforms into a spacious serving area when the family entertains. A large Minotti sofa and chairs help frame the sitting area. Adhering to the client’s meticulous and minimalist aesthetic, Rottet selected other pieces such as an Eric Schmitt Bulb table, Yabu Pushelberg stools, and Holly Hunt Absinthe side table to complement the exposed black steel beams. Dazzling lighting fixtures inspired by nature, including a Lindsey Adelman Cherry Bomb chandelier, also tap into the home’s indoor-outdoor style. “We intentionally brought that in so that it felt like the furnishings and the light fixtures in the home were part of the compilation of the architecture,” says Rottet. 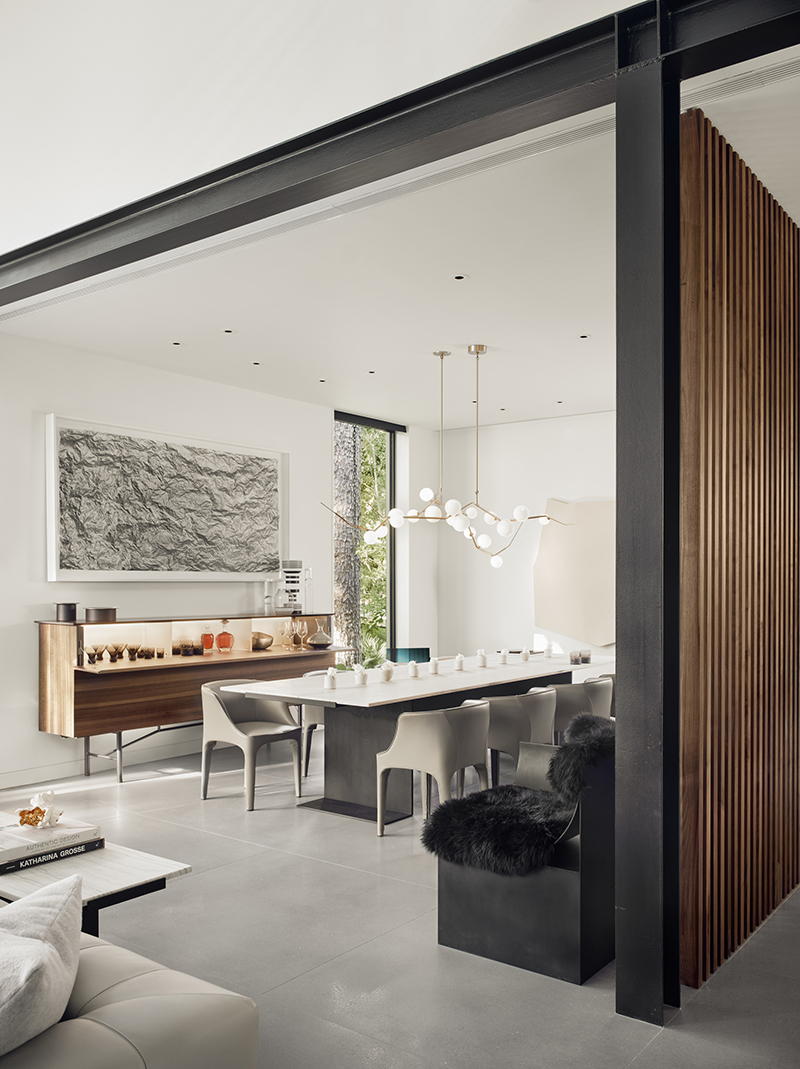 In the dining room, a Christopher Stuart Glitch chair from the Future Perfect adds a whimsical touch. A Lindsey Adelman chandelier surmounts a custom dining table while the Grand Buffet by Acerbis is topped by one of Alyson Shotz’s “Topographical Iterations” works on paper. Photo: Casey Dunn

Other elements were selected to push against the rigidity of the space, including Christopher Stuart’s Glitch chair from Future Perfect and an Ombré glass chair by Germans Ermičs. “The two of them sit there with almost no purpose at all except to reflect the sun in a beautiful way, but the client has remarked those two are everyone’s favorite chairs and people sit in them all the time,” says the designer.

Before this home, the client had not collected art, so Rottet introduced them to an array of galleries and artists. “Everything that she liked was very lyrical, which I found perfect because that’s what the house needed,” says Rottet. “It did not need any more stiff forms.” 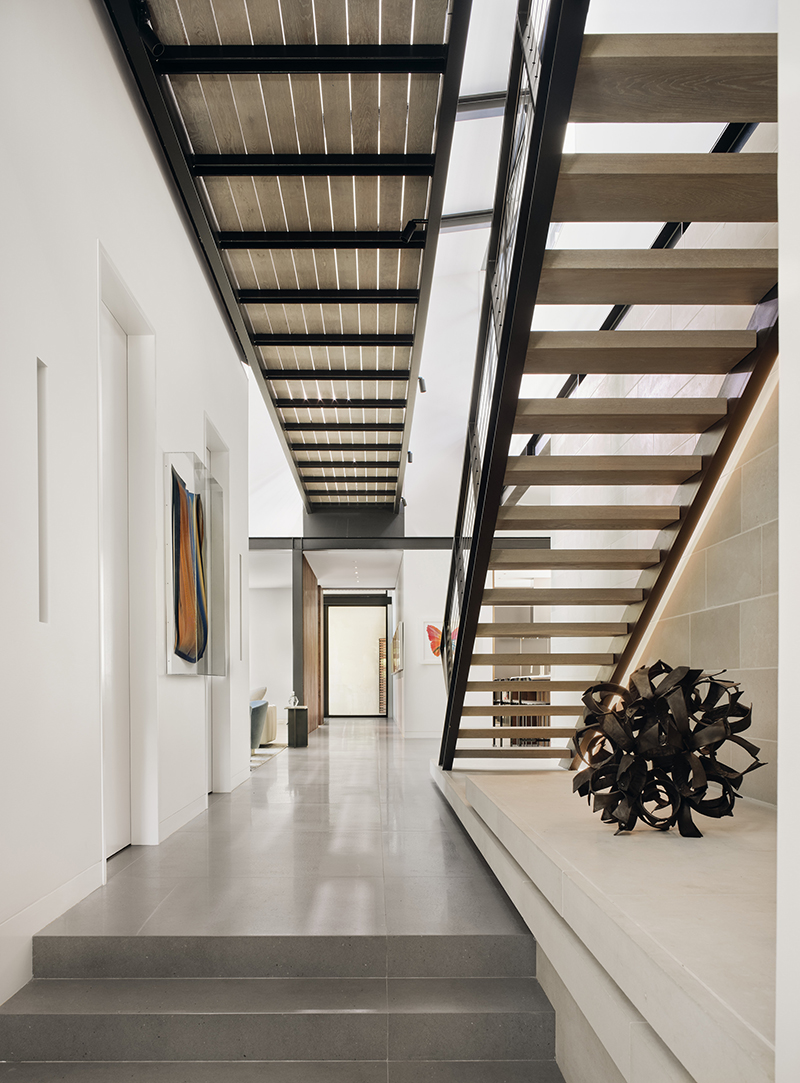 The acquisitions balanced recognized artists, such as Anish Kapoor, Damien Hirst, Robert Longo, and Agnes Martin, with pieces by emerging talents, including many who are working in and around Houston. Among that group was  Eduardo Portillo, who created a three-dimensional canvas sculpture in the dining room, a massive cast resin installation by Paul Fleming that envelops the screened-in porch, and a large-scale wall hanging by Troy Stanley in the main bath.

“This house sings,” says Flato. “The structure and the choices of materials, all of those thing are part of the joy of making a house.” 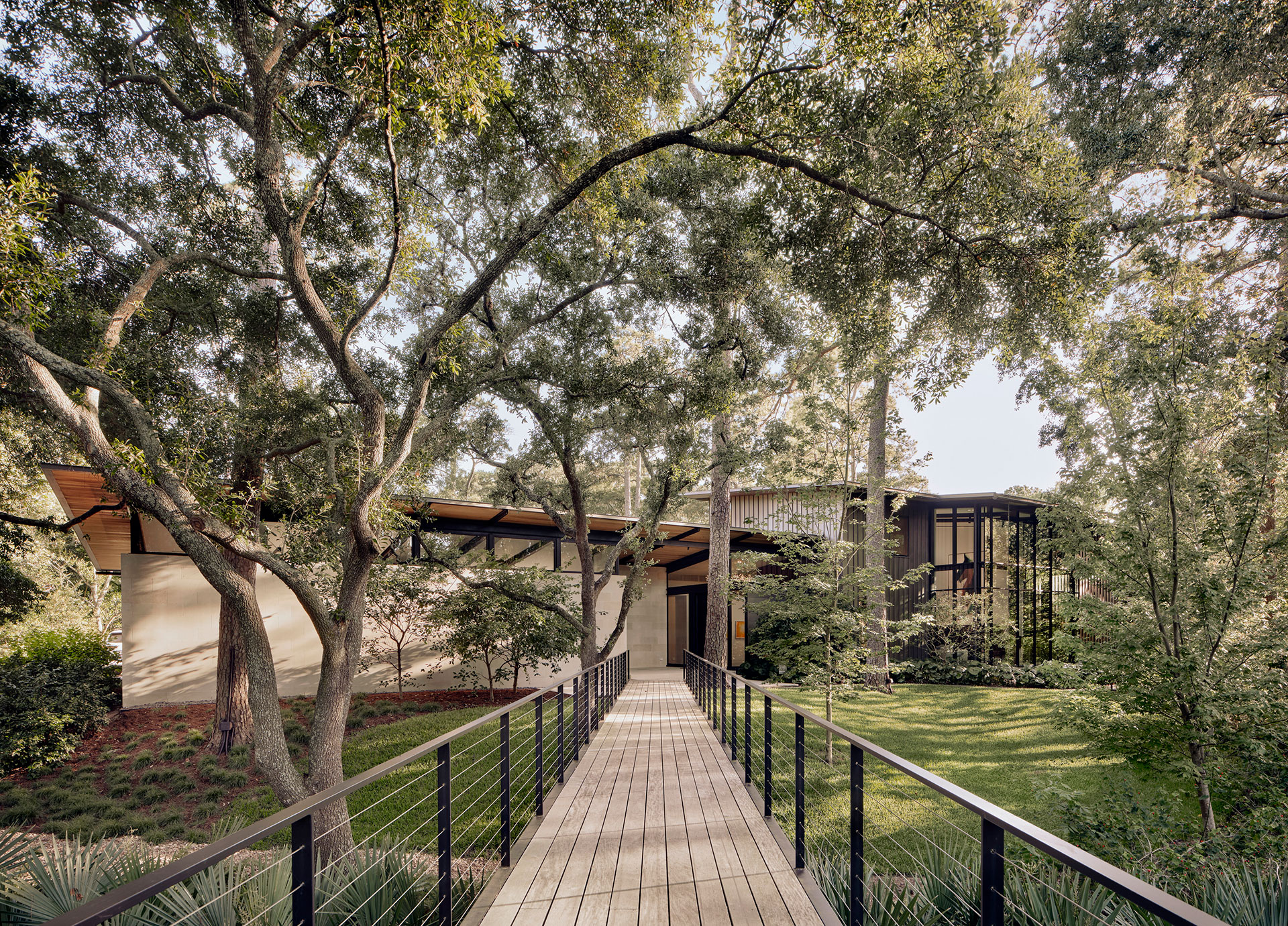