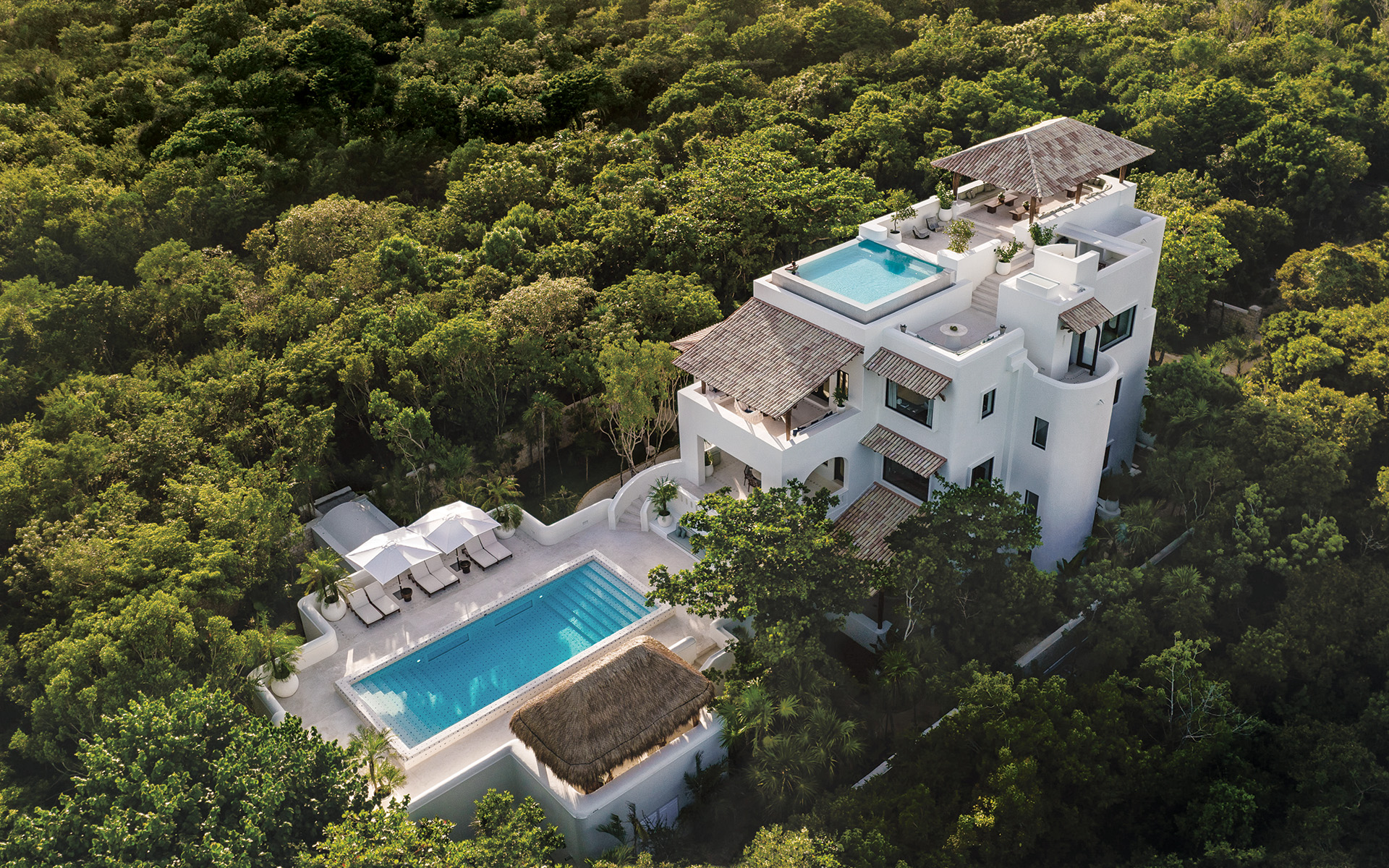 The Esencia Mansion on the grounds of Hotel Esencia.
Photo: TANVEER BADAL 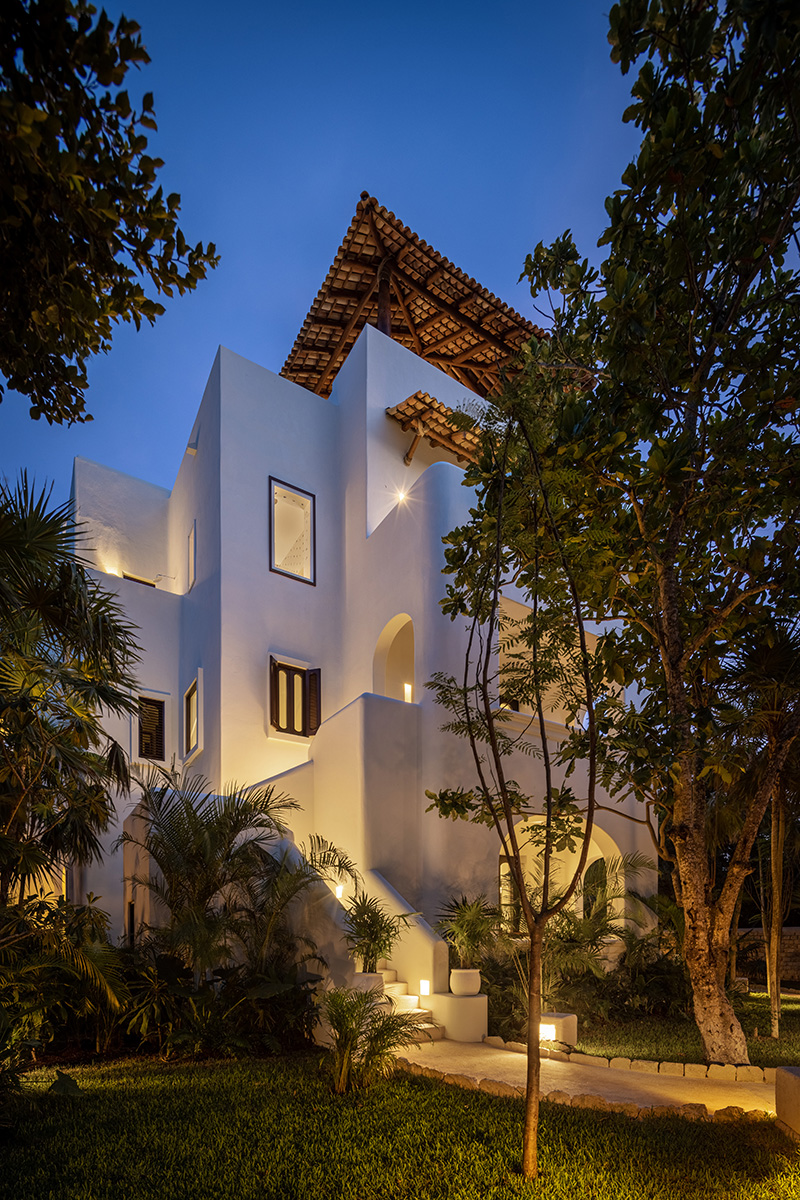 Set on 50 oceanfront acres along Mexico’s lush Riviera Maya, Hotel Esencia has been a magnet for high-profile guests (among them Lupita Nyong’o and Jason Wu) since opening in 2014. New this year is the Esencia Mansion, a 12,000-square-foot retreat that was originally conceived as a private home for founder Kevin Wendle, a Hollywood media mogul and co-founder of Fox Broadcasting.

Available as one palatial accommodation with room for eight guests, the lavish sanctuary was designed in collaboration between Hotel Esencia’s artistic director Juan Carlos Gutiérrez and in-house architect Peter Svensson, as well as New York–based Studio Giancarlo Valle. The four-suite manse includes a trio of pools, a 20-seat cinema, blue-chip artwork, and an underground cocktail lounge. “The idea was to introduce another world to the hotel,” explains Valle of the subterranean space, which is sheathed in tropical murals. “There are two large windows into the pool that provide a voyeuristic glimpse under the water. The idea to have a speakeasy bar came from Kevin, as he wanted a secret place to have a fun and, sometimes noisy, late night parties without disturbing any sleeping guests.”

Numerous works of art from Wendle’s private collection enliven the interiors, but there are also myriad bespoke creations throughout. Brooklyn artist Marcel Dzama, for instance, created thousands of blue and white tiles featuring local fauna (parrots, turtles, and coatimundi, to name a few) that sheathe the ground-level pool. “I love the Betty Woodman ceramic wallpaper,” adds Valle. “It has incredible energy and spirit, and it’s amazing to see that piece in Mexico where there is a connection to the ceramic tradition.”

See more photos of the Esencia Mansion below. 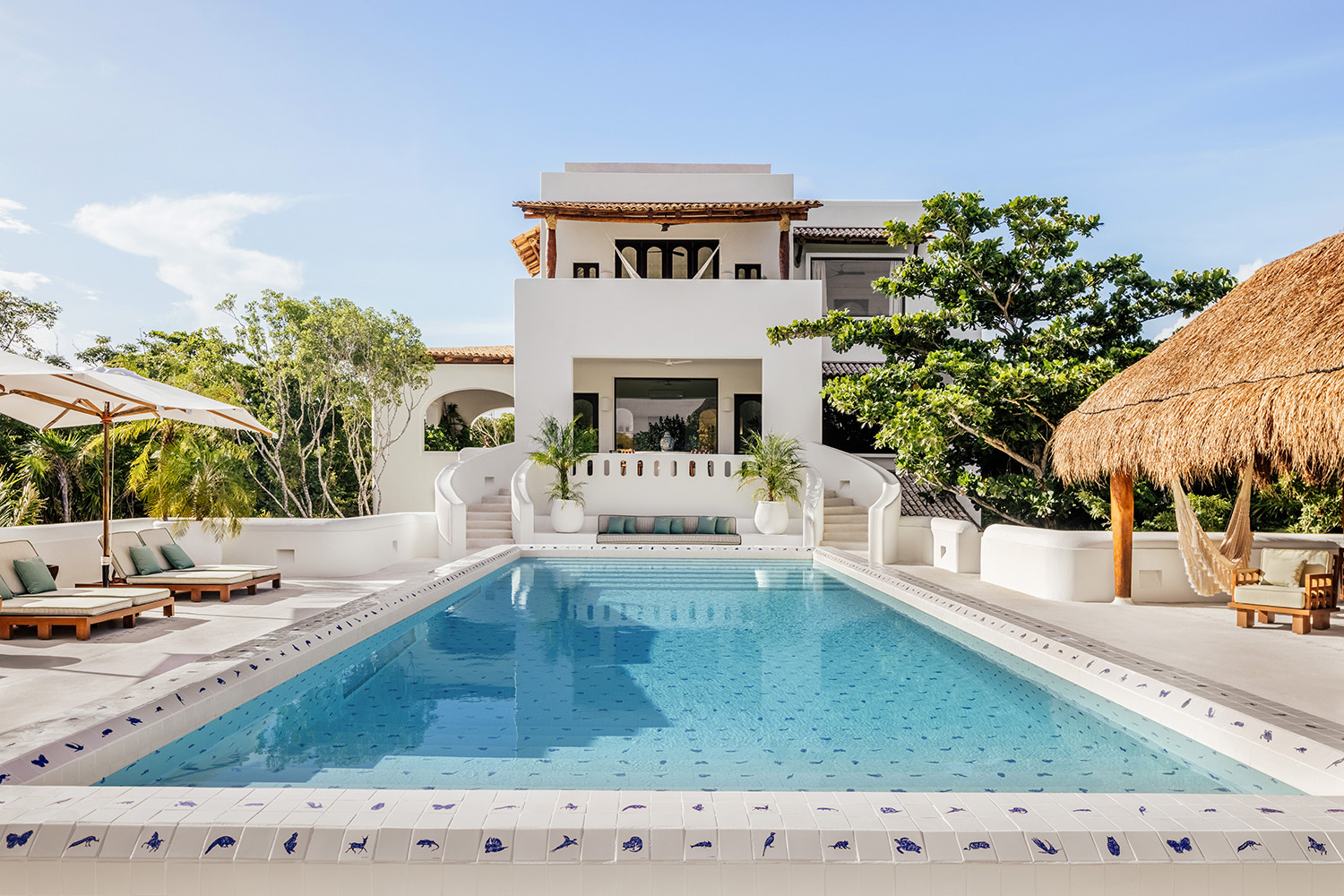 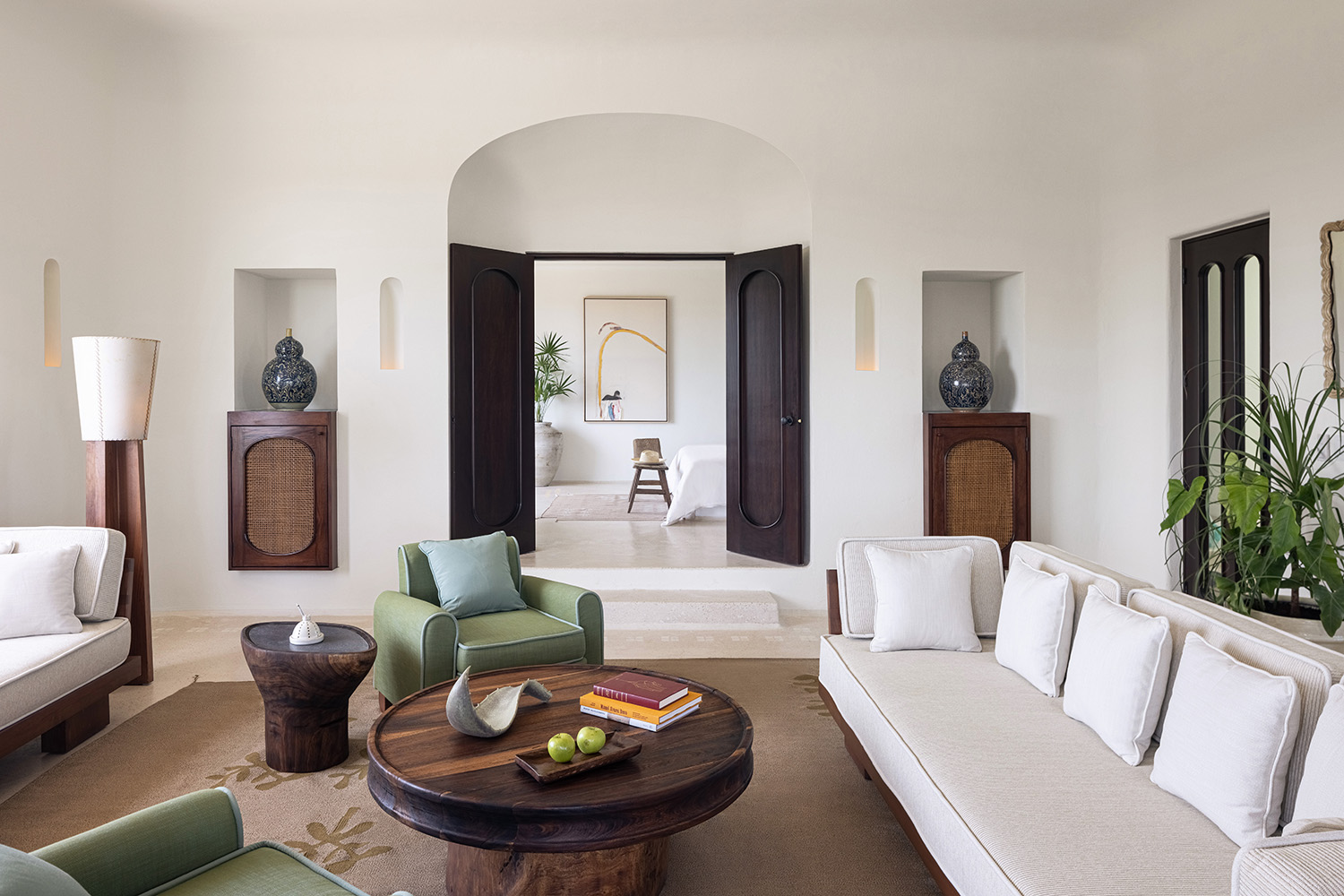 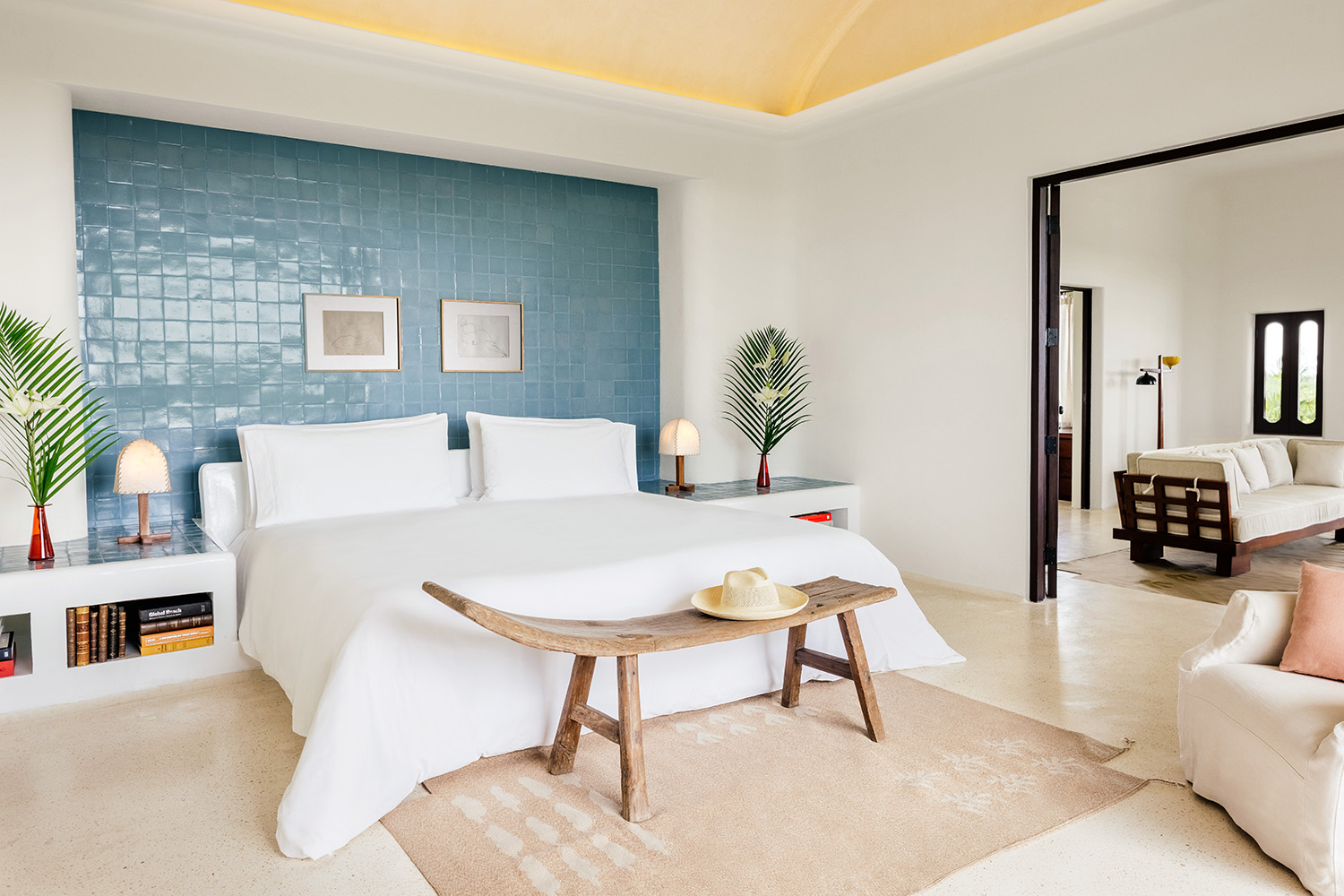 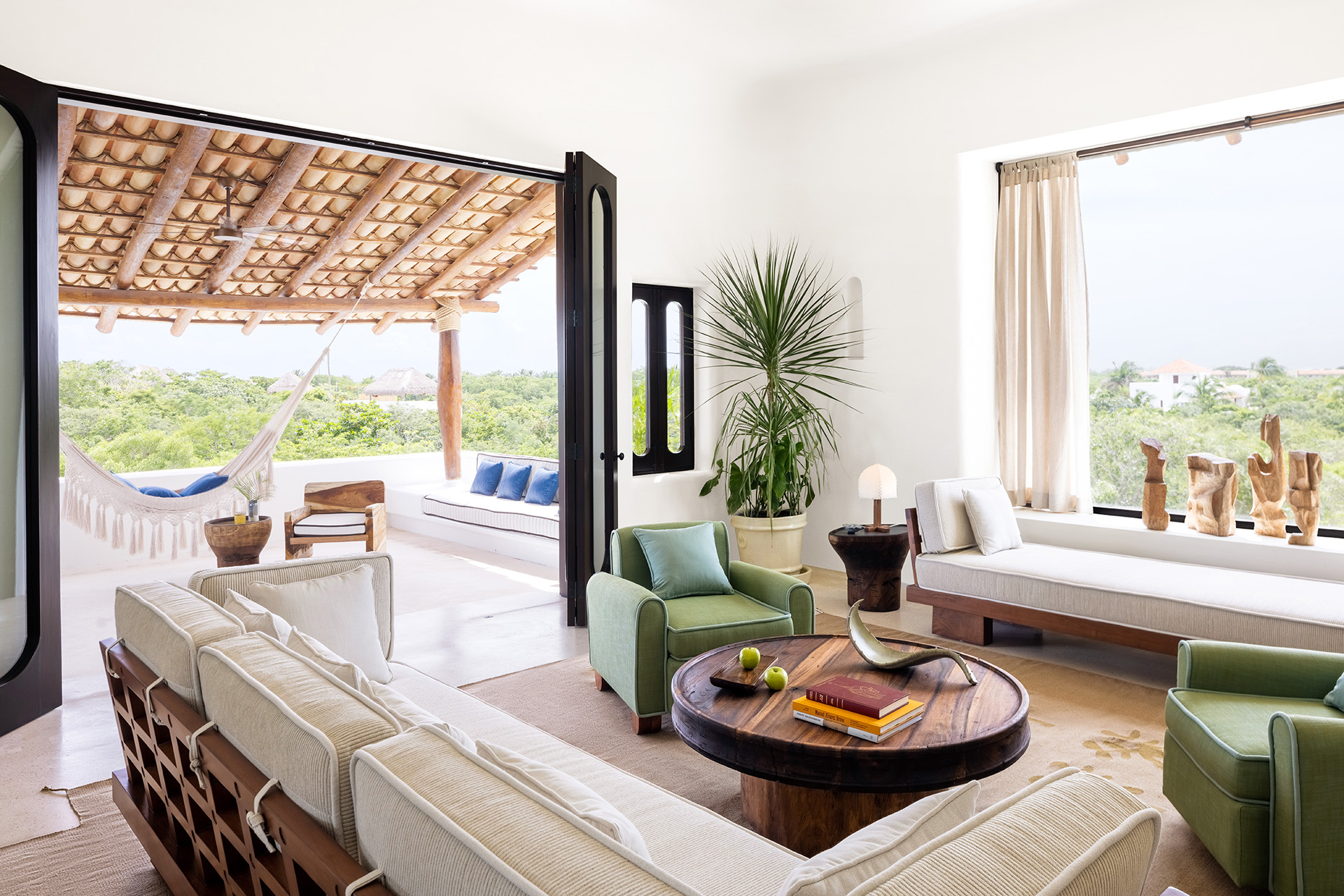 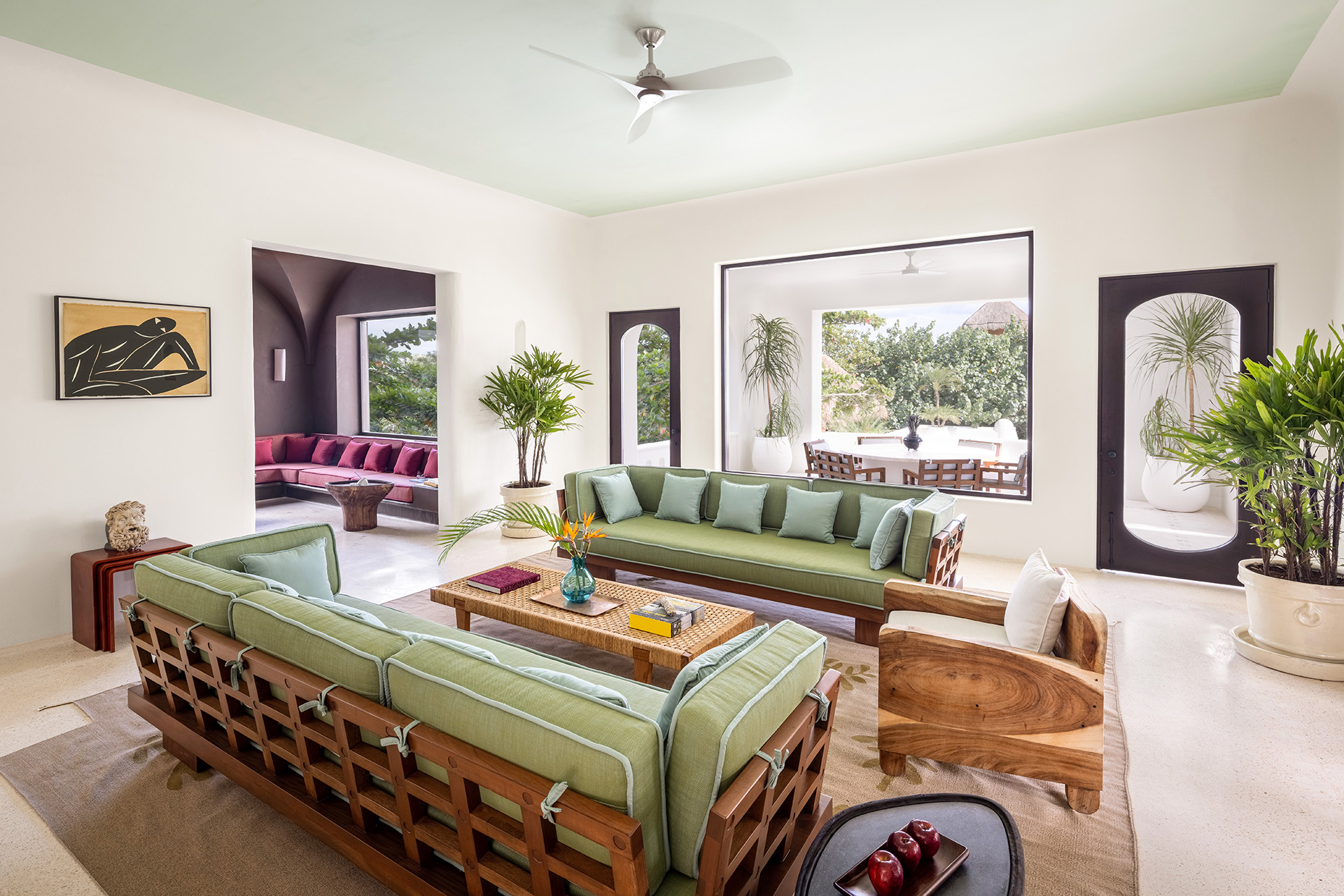 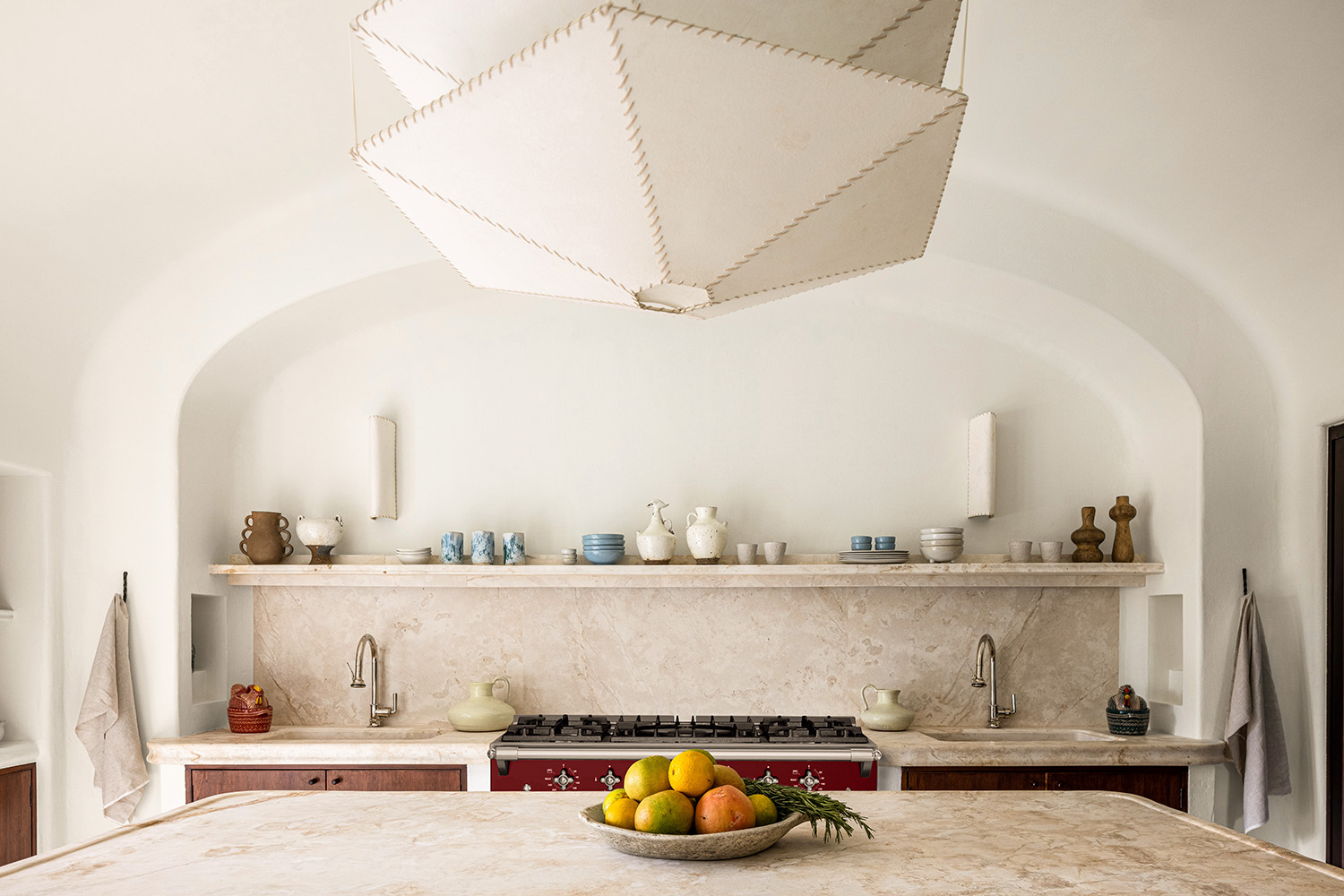 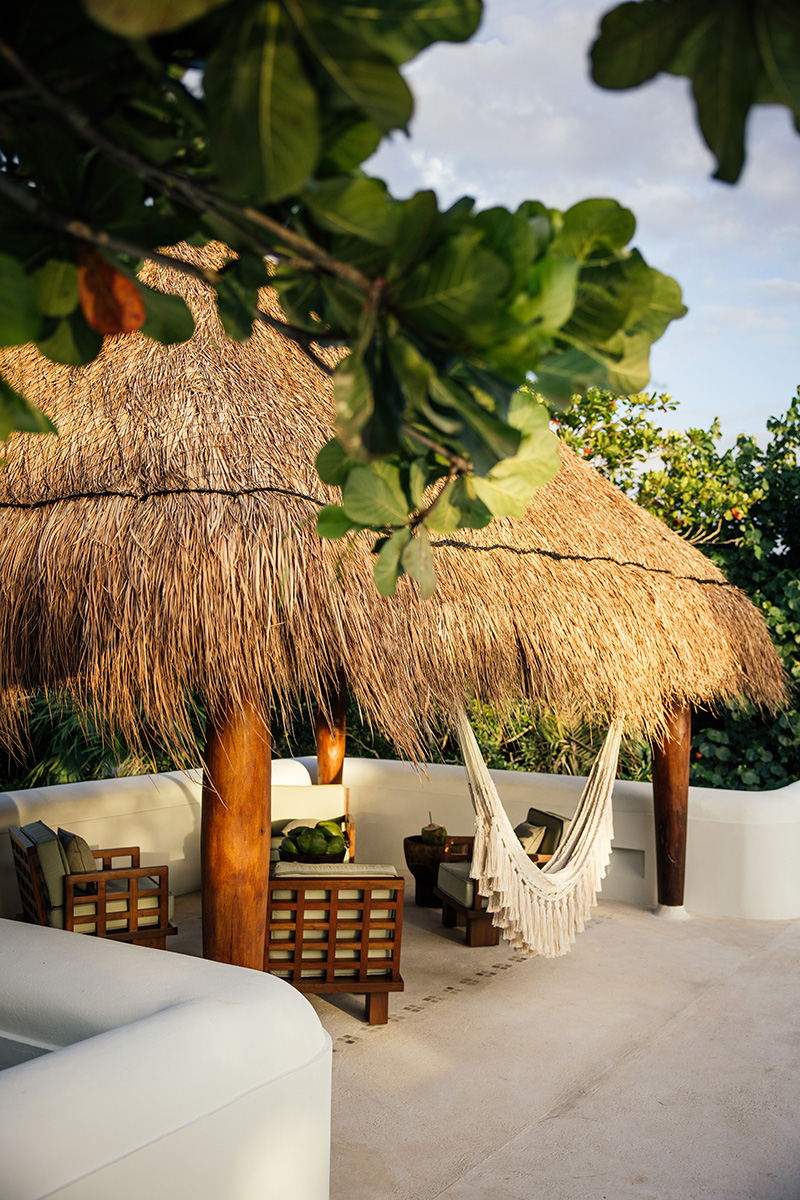 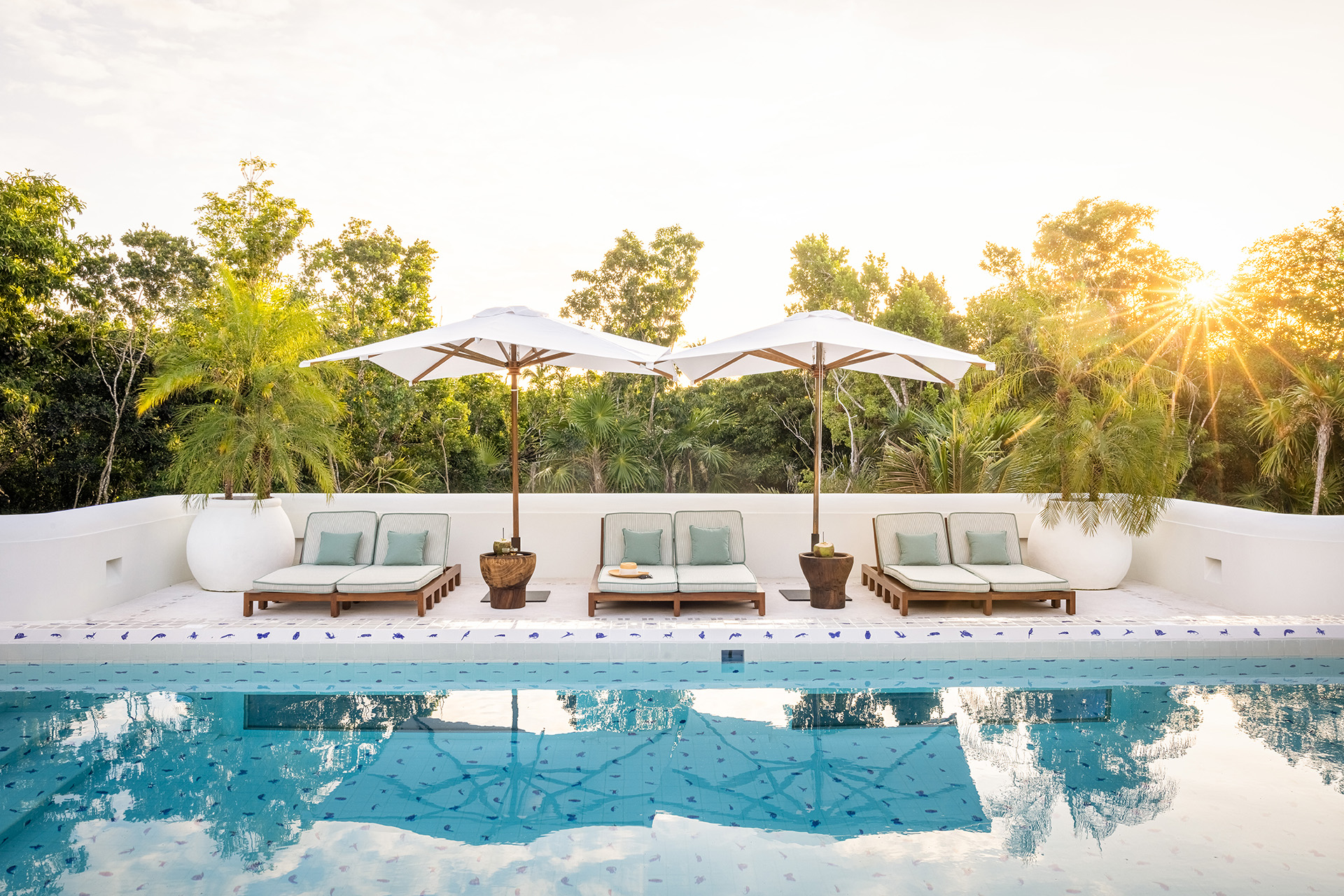 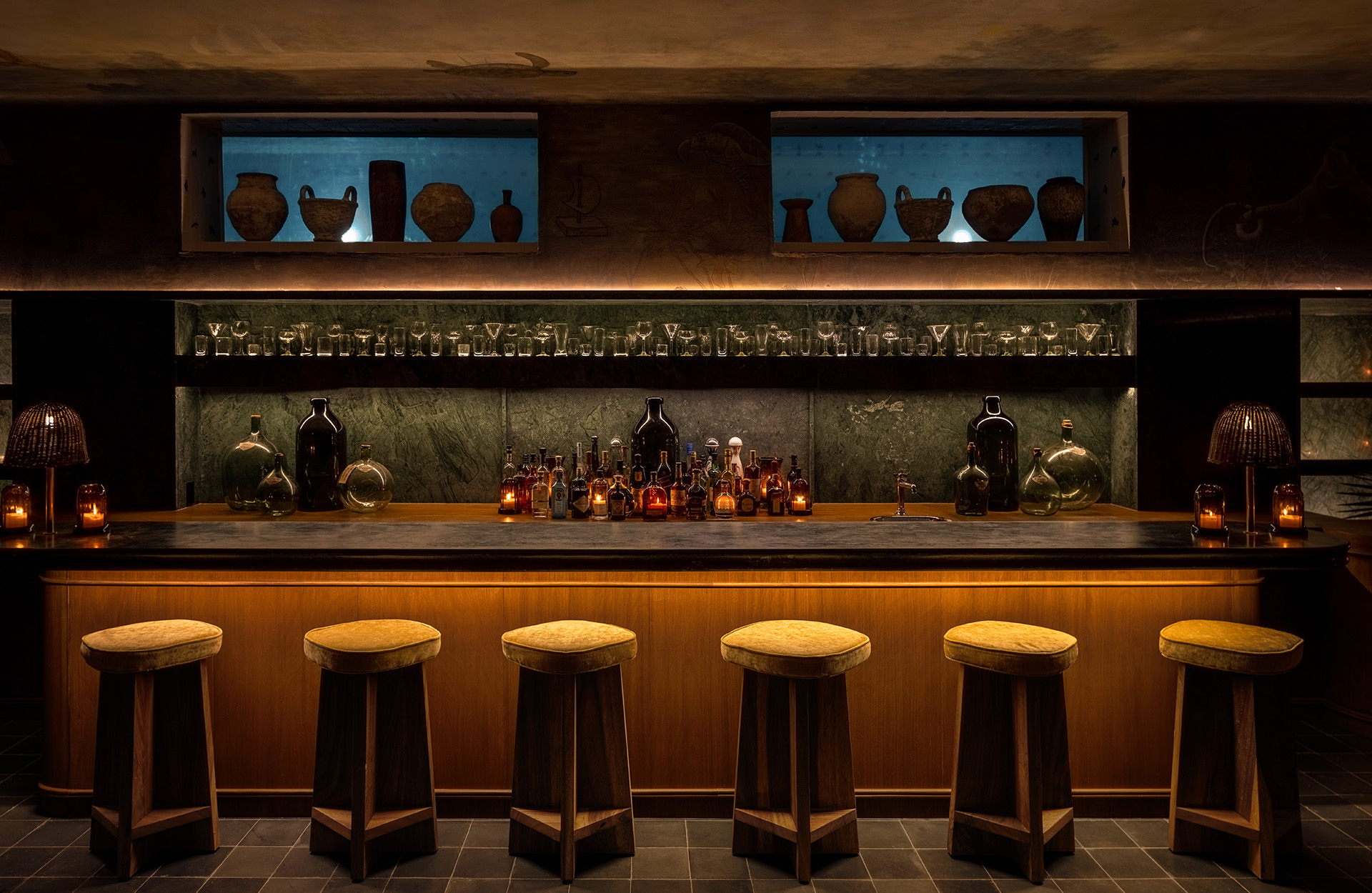 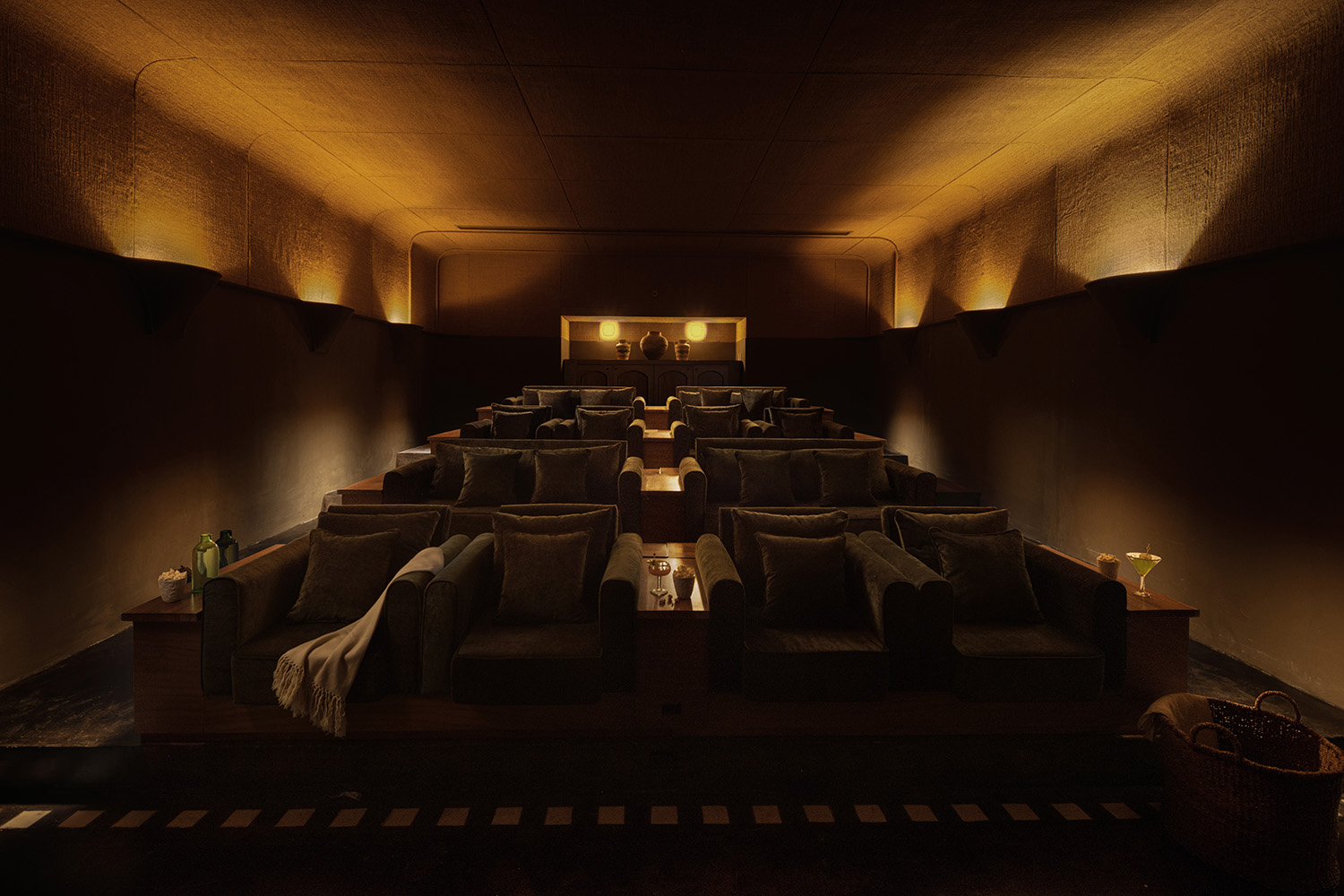 A version of this article first appeared in print in our 2022 Winter Issue under the headline “Jungle Book.” Subscribe to the magazine.

Cover: The Esencia Mansion on the grounds of Hotel Esencia.
Photo: TANVEER BADAL
Next Post 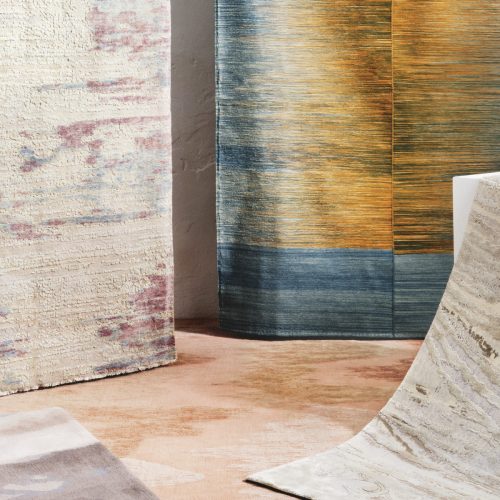