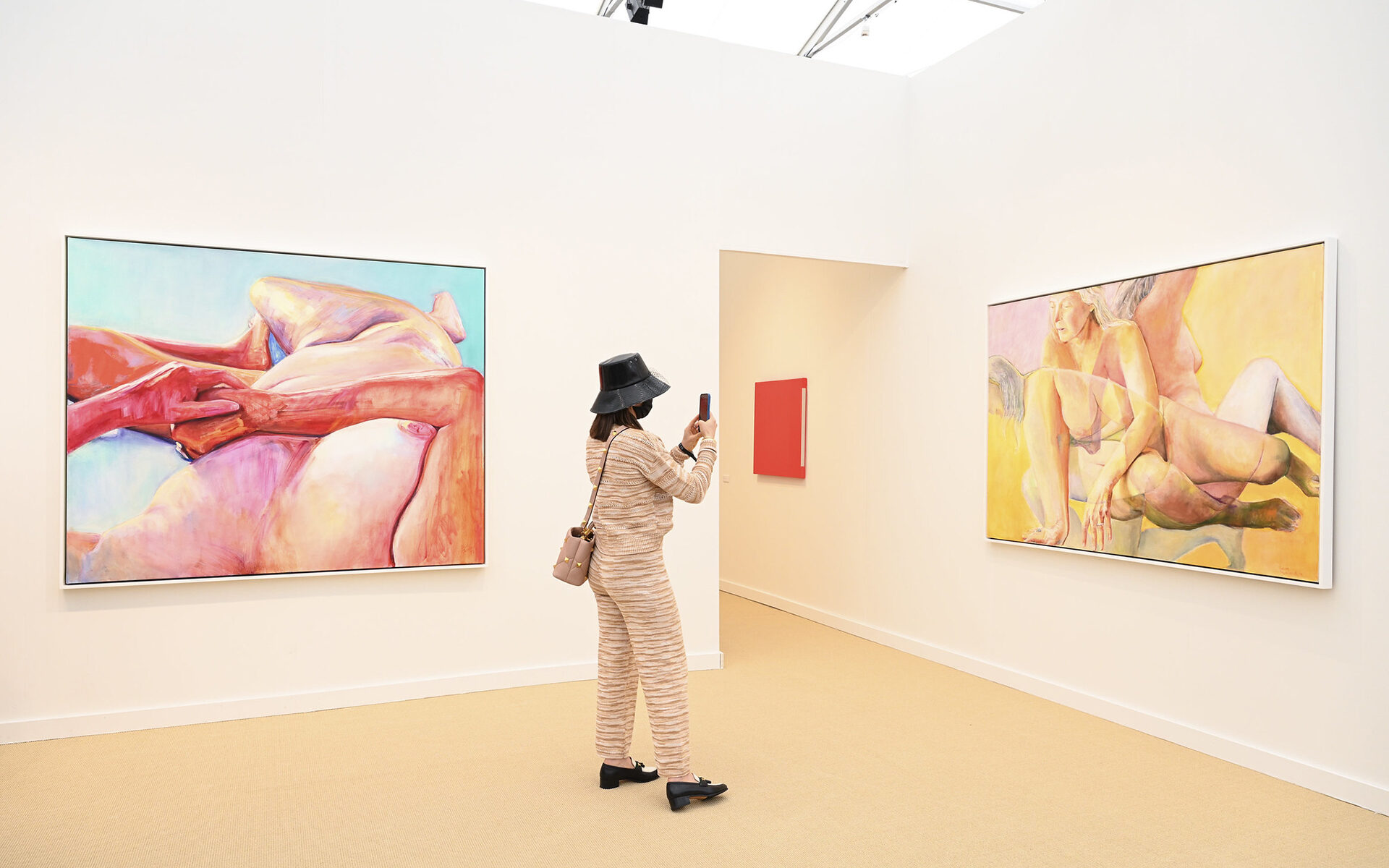 These Are the Standout Moments from Frieze Los Angeles 2022

With over 100 exhibitors, the international art fair is returning to Southern California stronger than ever

Two years ago, the art world descended on Los Angeles for Frieze L.A., in what would turn out to be the last art fair in the U.S. before the world came to a grinding halt due to the pandemic. After canceling its West Coast edition entirely last year, Frieze L.A. is returning from February 17 to 20 stronger than ever. On Thursday, the fair’s VIP opening boasted a decidedly jubilant and buzzy mood. And with the exception of everyone wearing masks and a few vaccine protocols thrown in, it felt just like the social fair days of old.

Adding to the excitement was that seemingly every gallery has recently announced plans to open a Los Angeles space, including Pace and Sean Kelly, resulting in the global art world closely following the  flourishing cultural scene—and it did not disappoint. In its smart new location in Beverly Hills, adjacent to the iconic Beverly Hilton Hotel, a large white tent designed by the Los Angeles darling of architecture Kulapat Yantrasast and his firm, WHY, has been erected opposite the Beverly Hilton.

The iconic hot-pink Frieze logo wall beckons visitors at the entrance, encouraging plenty of selfies and photos before check in. Compared to the scaled-down version of Frieze New York last year, with just 60 galleries at the Shed, Frieze L.A. returns with gusto, upping its gallery count to some 100 exhibitors. Inside, it was as busy as ever. Booths were jam-packed with fairgoers embracing and excitedly chatting, making it at times difficult to walk through the aisles for the first few hours. It wouldn’t be an L.A. moment without some celebrities of course, and spotted meandering the booths in the first hour were Pierce Brosnan at Pace Gallery (admiring a large Gazing Ball sculpture by Jeff Koons, no less), Owen Wilson, Amy Pohler, Leonardo DiCapro, Rita Ora, and the Weeknd.

Below, Galerie shares a selection of standout artworks and booths that made a big impression. 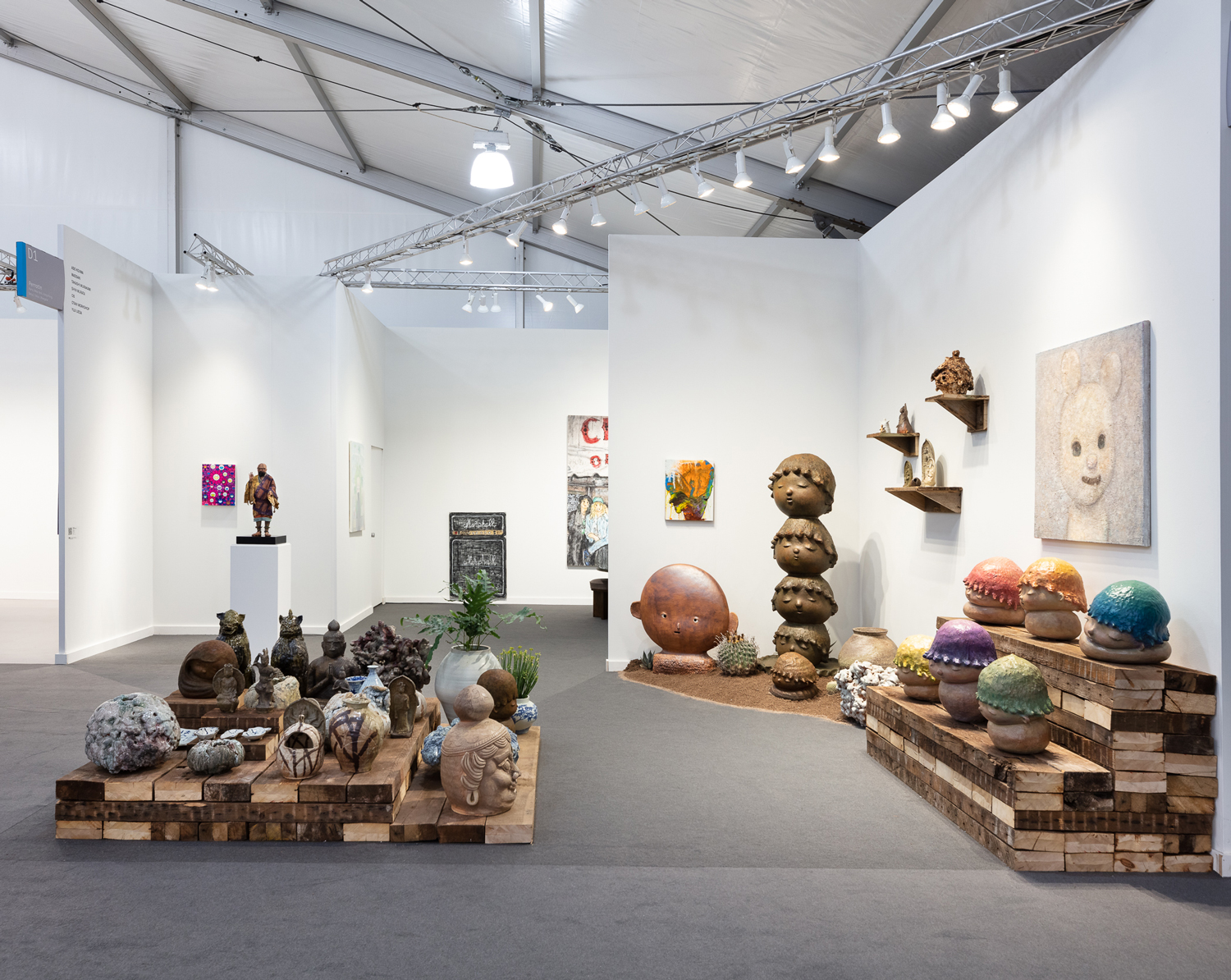 While Takashi Murakami may be best known as the inventor of Superflat and recognized as one of the most important Japanese artists working today, it’s less known that he is a passionate collector and patron of Japanese ceramics. Over the past 15 years, he has not only built a private collection of over 30,000 pieces but has been committed to supporting the next wave of contemporary Japanese ceramic artists, organizing exhibitions, financially supporting their production, and collecting their work. This passion is now on view at the booth of Perrotin, Murakami’s longstanding gallery, which has locations in Paris, Hong Kong, New York, Seoul, Tokyo, and Shanghai. Here, Perrotin is presenting a survey of some 60 artworks by young and established Japanese contemporary artists belonging to Kaikai Kiki, the Tokyo artist collective that Murakami founded in 2001. There are a delightful, idiosyncratic installations of expressive works by Otani Workshop, Murakami’s main protege, who transformed the New York Perrotin in the Lower East Side with his art in 2021.

Murakami became Otani’s champion, giving him a 2016 solo show at his Kaikai Kiki Gallery in Tokyo, which the artist considers his first foray into the art world. “Murakami is a great connoisseur of ceramics,” Otani told Galerie in a recent interview. “As we started to work together, I realized there is so much to learn from him, including life as an artist and the difficulty involved in the process from an artwork’s creation to the delivery to an audience.” Also on view are new Japanese ceramics by Aso Kojima, Shin Murata, and Yuji Ueda. And with some modestly priced at just a few thousand dollars, they could easily be some of the most accessible pieces on offer at the fair. 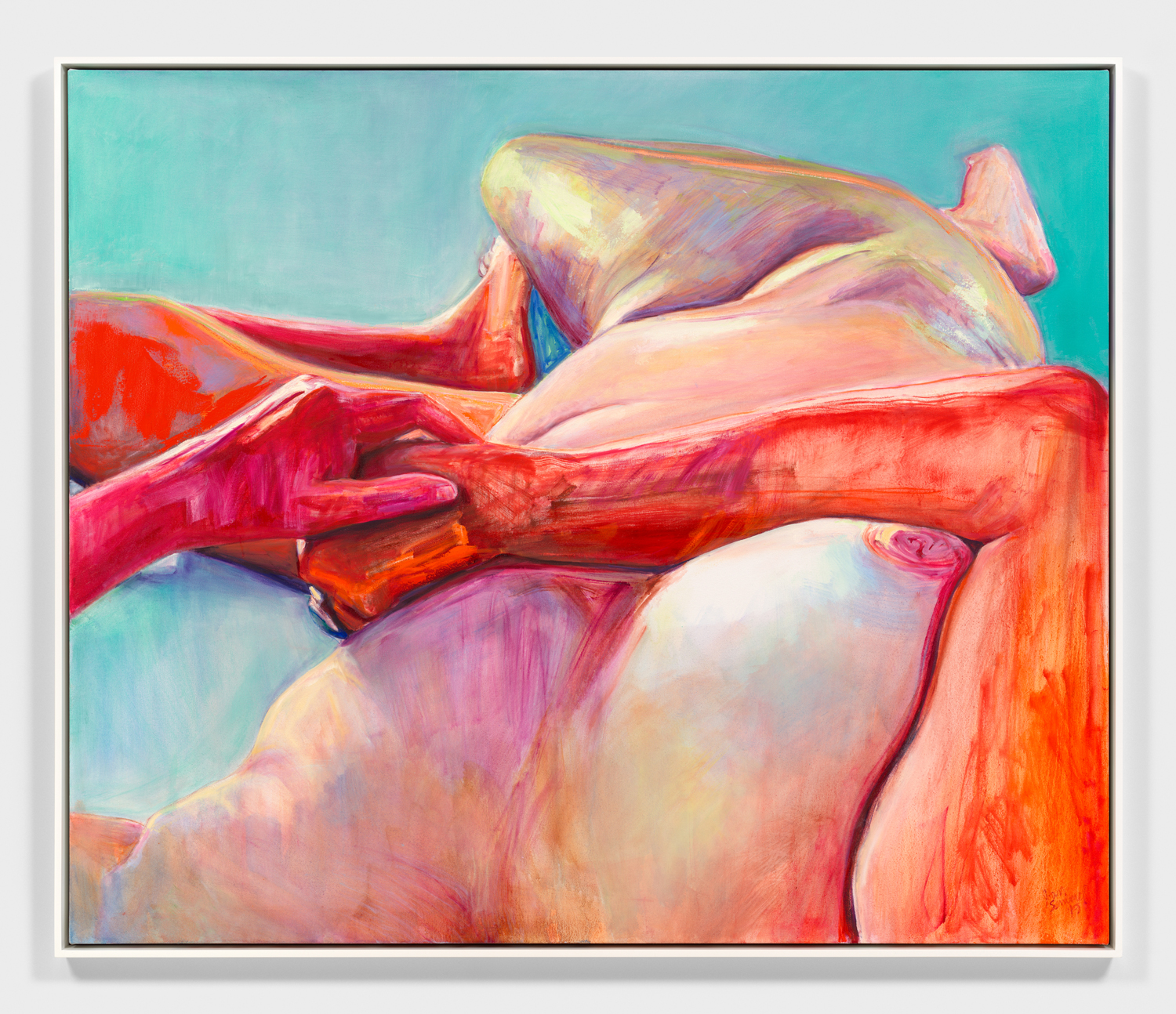 At 89 years old, Joan Semmel has been exploring the theme of the naked body since the early 1970s, when she made her mark on the art world painting large-scale oil paintings of couples having intercourse. Since then, she has turned the attention inward, using her highly personal paintings as a means to document her nude body as it has aged over the years. Three large-scale works by Semmel make an immediate impact on the walls of the booth of Alexander Gray Associates. One of the more recent works is particularly breathtaking; Spaced Out, which she created in 2019, depicts a top-down, close up, view of her fleshy breasts, arms and stomach, rendered in a vivid palette of reds, oranges, and purples against an acidic turquoise green, lending the work an almost supernatural glow. Semmel is currently having a big year, with her first and long overdue museum retrospective. Titled  “Skin in the Game,” it covers more than six decades of her practice and is on view at the Pennsylvania Academy of Fine Arts (PAFA) in Philadelphia. The works had all sold on opening morning.

Created specially for the fair, these works on view mark the beginning of a larger series of paintings by on-the-rise artist María Berrío, who blends the history of the 13th-century Children’s Crusade with the current mass migrations of peoples across the Mediterranean and the U.S. border. “I started working on this series of work a year ago,” the artist tells Galerie. “I was reading about the children and the crusade that happened in the 13th century, and I blended that with the current migration crisis. That’s how the themes of the work started. Most of the works use my son as the model. They each have a story that lends to the theme somehow. Like with all my work, I blend fantasy and reality. I love fantasy to escape from our current reality. I try to dig into fantasy to tell a difficult story.” Cavalry, for example, depicts her son on a whimsical merry-go-round, a reference to the often long and tiresome journey children must take during migration. “The carousel is the most poignant symbol to the absence of place, a machine that moves in circles with no real or familiar ground or destination,” Berrio says. The works had sold out but two at time of reporting. 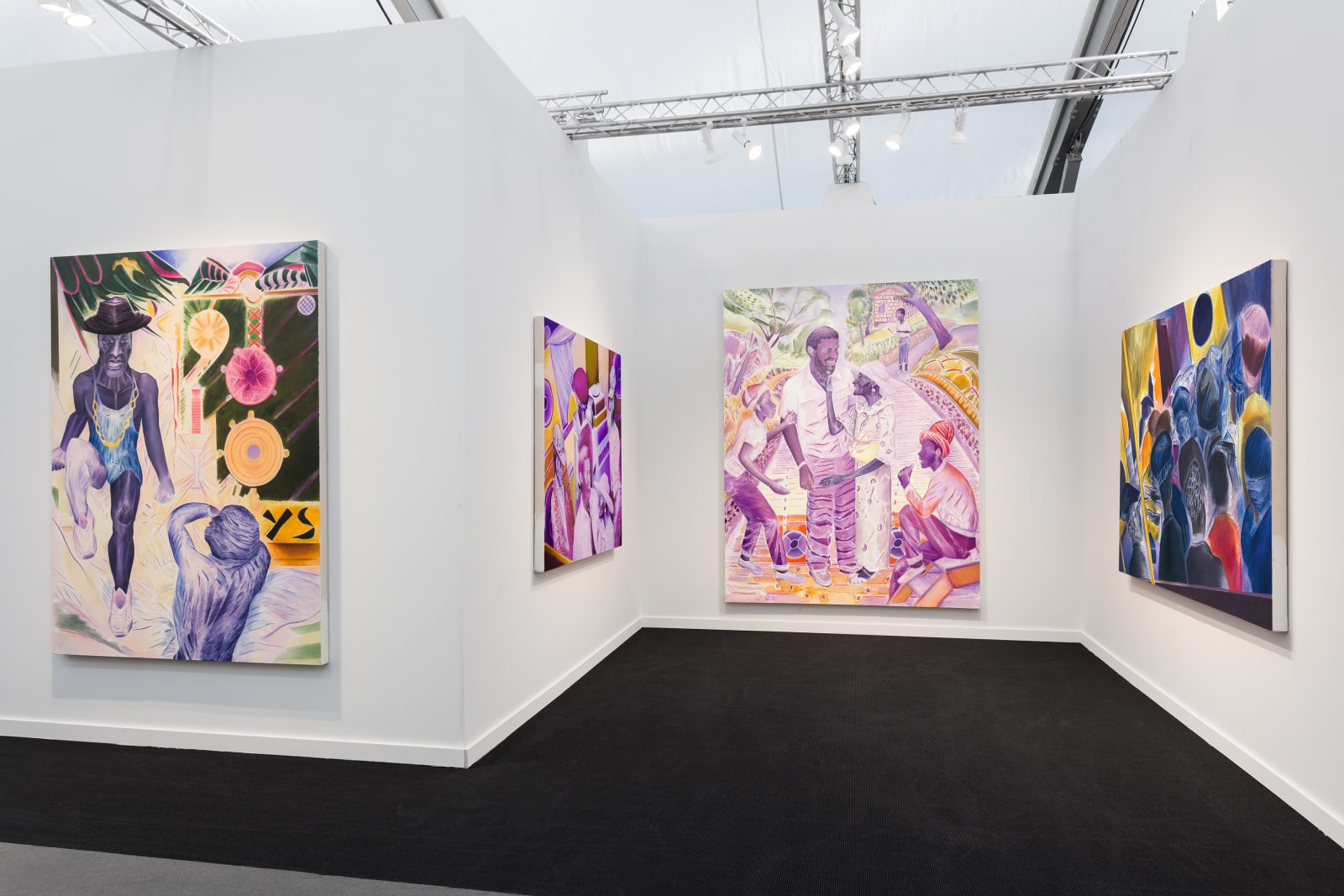 London’s Stephen Friedman Gallery dedicated its booth to a solo presentation of works by the Grenada-born British artist Denzil Forrester. Pulsating with an almost tangible energy and rhythm, his works capture the feeling of the London reggae and dub nightclub scene during the early 1980s. Flashes of color and quick, gestural brushstrokes define his style. “I just wanted to draw movement, action, and expression,” the artist once said. “I was interested in the energy of the crowd, particular dance movements and what the clubbers wore. In these clubs, city life is recreated in essence: sounds, lights, police sirens, bodies pushing and swaying in a smoke-filled room.” The artist’s unique process includes him drawing in his sketchbook at the bar until the wee hours of the morning, before developing the large compositions in the studio the following day.

Music literally guides the artists hand, too: Each sketch is usually delineated by the duration of a song, roughly four minutes long, with the next drawing beginning in sync with the changing soundtrack. While the artist is very well known in England, he is about to make a mark in the U.S. this year. He was selected to participate in the upcoming 58th edition of the Carnegie International, which will be on view inPittsburgh from September 24, 2022, to April 2, 2023. After is a solo show at the Kemper Museum of Contemporary Art, Kansas City and the ICA Miami in 2023. “We are thrilled with how the fair is going,” says Harry Laughland, director of Stephen Friedman Gallery. “We sold out all the paintings as soon as the fair opened. It’s been very successful.” 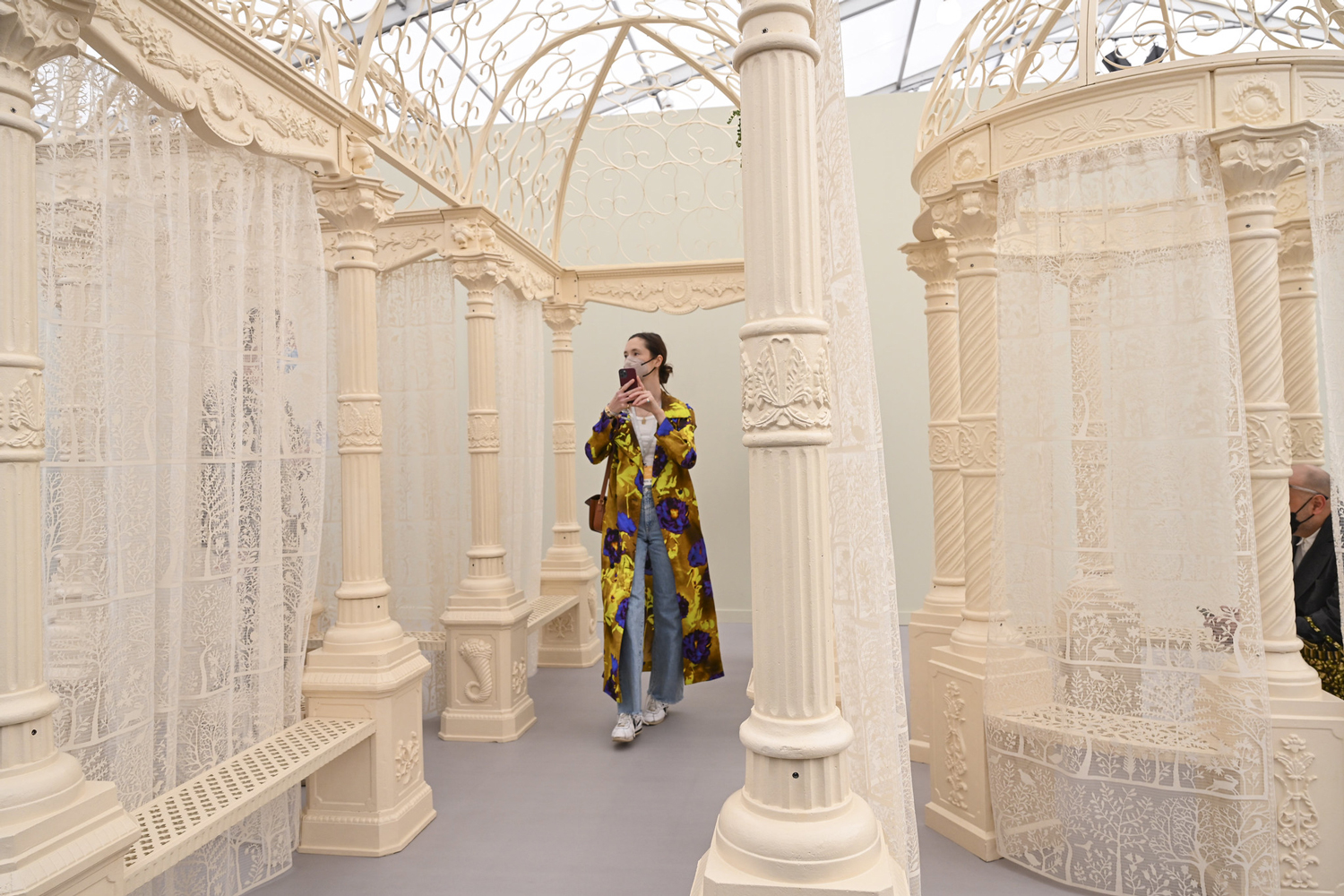 Art fairs can be overwhelming for even the most seasoned fairgoers. So, after soaking in the art-packed booths—and the many over the top fashionistas and glitterati that can be almost as fascinating to watch, make a pit stop at Chris Burden’s installation, presented by Gagosian. Located at the entrance of one wing, the work titled Dreamer’s Folly, is a monumental structure crafted with found 19th-century cast-iron gazebos that the artist melded together to form his own unique architectural structure. Hanging from the frames are panels of vintage lace fabric that gently sway as you walk through. The 2010 installation, which is meant to recall an English garden, debuted at Gagosian’s Rome space the year it was made and hadn’t been exhibited since.

The show-stopping work, which also provided plenty of Instagram fodder, sold to a major institution on the opening morning. Its presentation was also a fitting tribute to the late artist, who was long based in Log Angeles, and who had a close relationship with Larry Gagosian. In March, the gallery is publishing the book Poetic Practical: The Unrealized Work of Chris Burden, which includes many of his unrealized projects, never-before-seen archival materials, and newly commissioned photography of Burden’s studio and property.