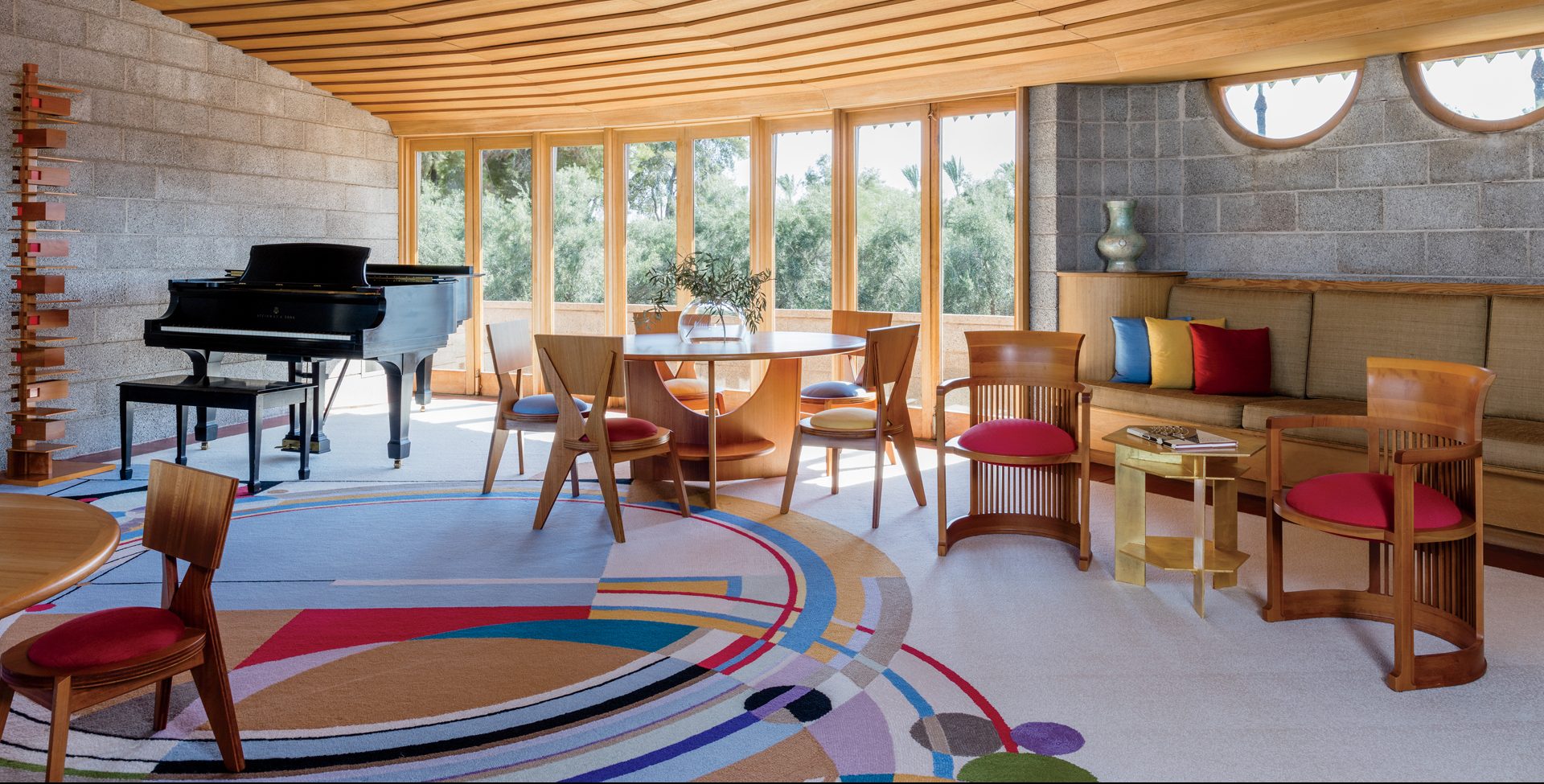 The floor-to-ceiling windows, concrete floors, and a mahogany ceiling are all original and contrast well with the exact replicas of original Wright furniture upholstered in soft primary hues.
Photo: Antoine Bootz

“Like all Frank Lloyd Wright homes we have a leaky roof,” said Sarah Levi about a quirk for which Wright houses were notorious. Levi, 34, had spent the past year as scholar-in-residence at the David and Gladys Wright home in Arizona. “I became accustomed to a minimalist lifestyle. Only Wright family members lived in and appreciated the home,” she added, about the unique environment architect Frank Lloyd Wright—Levi’s great, great grandfather—created for his son and daughter-in-law. Growing up in the Wright clan had a profound influence on the Arizona-bred woman.

In fact, Levi had such a strong connection to the landscape and family home that she devoted her master’s thesis to a feasibility study and has since taken on the knotty process of transforming the iconic property into a house museum. “For months now the David Wright House has been in discussions with potential partners, including non-profit organizations to advance the mission of the Foundation and to preserve the home.” Levi emailed, confirming they’re in a holding pattern. “The discussions are still ongoing at this time,” she said, explaining the plan for the David Wright house and property to eventually be assigned landmark status. Completed in 1952 for David Wright and his wife Gladys (Levi’s mother’s grandfather and grandmother), the three-bedroom, two-bath 2,500-square-foot house was located in the Arcadia neighborhood of Phoenix on two acres in the middle of a citrus grove. The elevated home incorporated elements of Wright’s Usonian ideal—notably a strong connection between interior and exterior spaces, simple materials, and the use of built-in furnishings. Referred to as “A Modern Castle in the Air” in an issue of House Beautiful magazine published in 1955, the home was sited with spectacular views of Camelback Mountain accessed from several vantage points in the home. The spiral construction also served as a study and precursor to the Guggenheim Museum, which underscored Wright’s longstanding fascination with that motif. Levi added, “We were essentially a test run for the ramp in the museum.”

In Phoenix, a ramp, leading from the ground floor courtyard—where, formerly, there was a swimming pool—up to the front door were supported by seven concrete block piers. Upon entering the home, visitors encounter a large circular living room and cylindrical kitchen installed with windows that are round. A curved hallway leads from the living room where Wright’s March Balloons rug was recently reproduced from the original drawings in the Wright archives. Movie producer Joel Silver purchased the original at auction in Los Angeles in 2010. “Some of my earliest memories were dancing with my grandfather around the circles in the rug,” Levi, about the overlapping geometric patterning inspired by a series of Liberty magazine covers Wright designed in the 1920s. The David and Gladys Wright House was positioned with views of Camelback Mountain in the distance. A tower kitchen to the left leads to a secondary ramp connecting to the roof terrace. Photo: Antoine Bootz

David Wright, who trained as an engineer was district manager for Besser Manufacturing Company, a maker of equipment used to produce the concrete blocks. The son insisted his father specify the concrete material in the construction with a series of decorative blocks created specifically for the Phoenix home. As for the rest of the infrastructure, mahogany-framed windows and galvanized metal, covering the roof, are original and remain intact today. Gordon Chadwick, a former Wright apprentice, and future partner in designer George Nelson’s practice, was brought on to supervise the construction. The colorful circular March Balloons rug was reproduced to replace the original sold at auction in 2010. The geometric pattern is inspired by a series of covers for Liberty magazine that Wright designed in the 1920s Photo: Antoine Bootz

The low ceiling height is a constant throughout his homes and is Wright’s penchant for a “compress and release” method of design, creating a claustrophobic entranceway leading into a sweeping plan. Polished concrete floors, brick, enlarged windows, and balconies were all trademarks of Wright’s at the time. “Having those influences and forward thinking is really the thread that’s carried throughout, because it’s still being used today,” said Levi, adding, “and relevant in all of his homes.”

Cover: The floor-to-ceiling windows, concrete floors, and a mahogany ceiling are all original and contrast well with the exact replicas of original Wright furniture upholstered in soft primary hues.
Photo: Antoine Bootz
Next Post