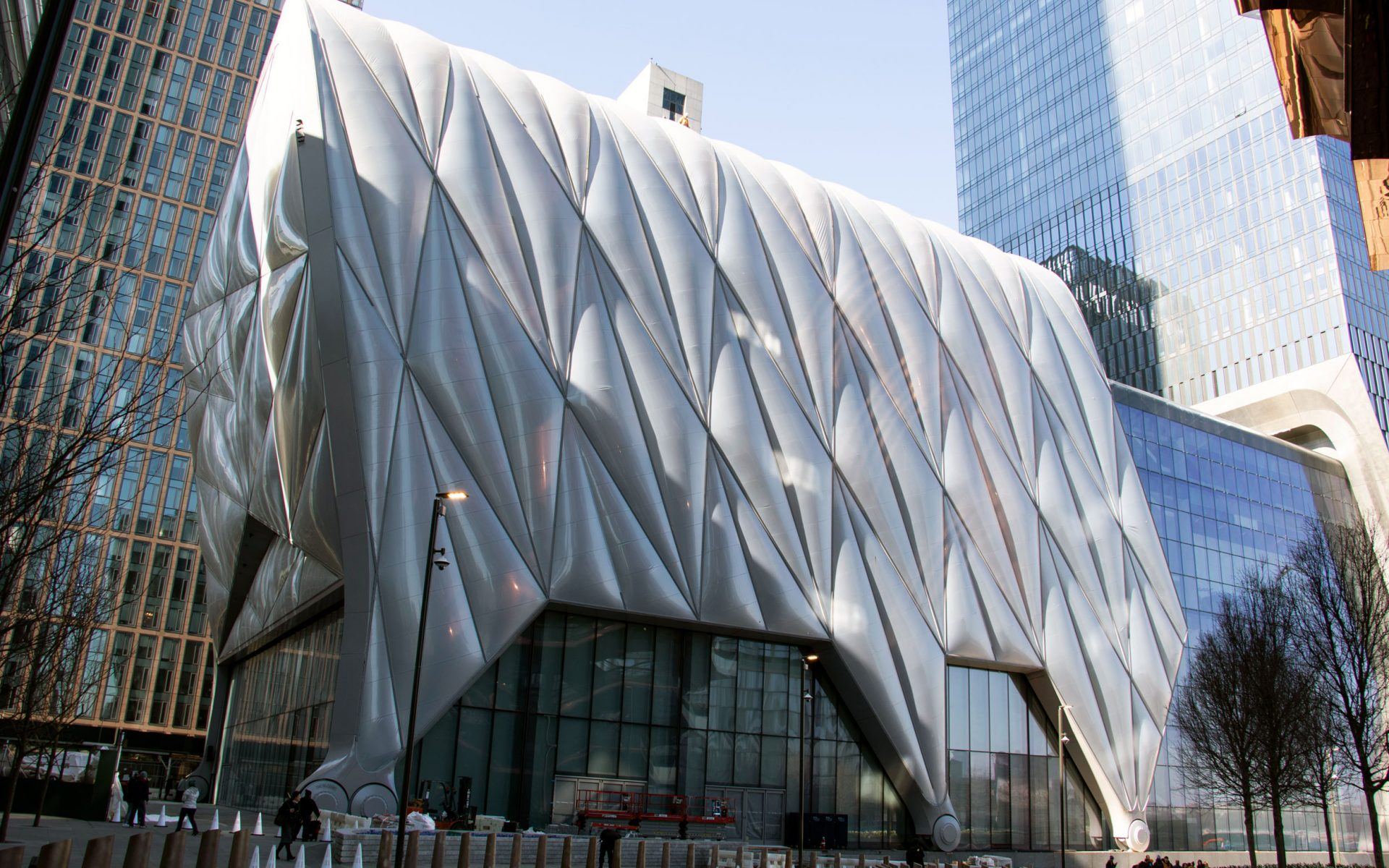 The facade of The Shed in Hudson Yards.
Photo: Stefanie Li

A First Look at The Shed at Hudson Yards, Which Opens Today

After more than a decade in the making, The Shed, one the most highly anticipated cultural openings in a generation, finally opened its doors today with the aim of bringing artists from all disciplines together and, in the words of its founding CEO and Artistic Director Alex Poots, of being a “commissioning center for artists from all art forms.”

The new cultural center is housed in a 200,000-square-foot building designed by Diller Scofidio + Renfro with the Rockwell Group. For its opening months, the institution, which is one of the centerpieces of the new Hudson Yards development, has commissioned art exhibitions, concerts, and performances with the goal of representing a broad swath of talent from a variety of disciplines. With a myriad of performance venues and contemporary art museums in New York, including Lincoln Center, the Whitney Museum of American Art, and the Museum of Modern Art, how does the Shed hope to set itself apart? “In a city like New York City, there are many world class institutions,” said Senior Program Advisor Hans Ulrich Obrist. “What is missing is an institution that can bring all the disciplines together.”

Embracing this idea of flexibility, the Shed’s cutting-edge design incorporates a retractable shell which moves out to cover an outdoor courtyard and “double the footprint of the fixed building when it expands to the east,” Elizabeth Diller tells Galerie.

At Wednesday morning’s press preview,  Poots described the center as a place for invention and risk taking. “The Shed brings together artists from all over the world, performing arts, visual arts, pop culture,” says Poots, who was formerly the founding chief executive and artistic director of the Manchester International Festival and the artistic director of the Park Avenue Armory.

To kick things off, German artist Gerhard Richter created a series of Rorschach wallpaper and tapestries to work alongside a choral piece by celebrated composer Steve Reich, best known for his minimalist work Music for 18 Musicians. Artist and filmmaker Steve McQueen has created a five-night concert series titled “Soundtrack for America” which is devoted to the history of African-American music in the McCourt, the venue’s grand central space named after property developer and mega-donor Frank H. McCourt. With the help of Quincy Jones and Maureen Mahon, McQueen enlisted 25 artists, from the acclaimed Jon Batiste to the up-and-coming Moses Sumney, and developed five different shows.

Here are more photos of the space, which opens today. The McCourt Theater was named after the property developer and mega-donor Frank H. McCourt, Jr. When the Shed’s signature shell is extended over the plaza, this space is used for big concerts. ( Björk will perform here in May.) Photo: Stefanie Li An installation view of Gerhard Richter’s wallpaper strips in “Reich Richter Pärt,” a series of immersive live performances that were the result of years of collaboration between the artist and the musicians Steve Reich and Arvo Pärt. A detail of one of Gerhard Richter’s works in “In Reich Richter Pärt.” Photo: Stefanie Li