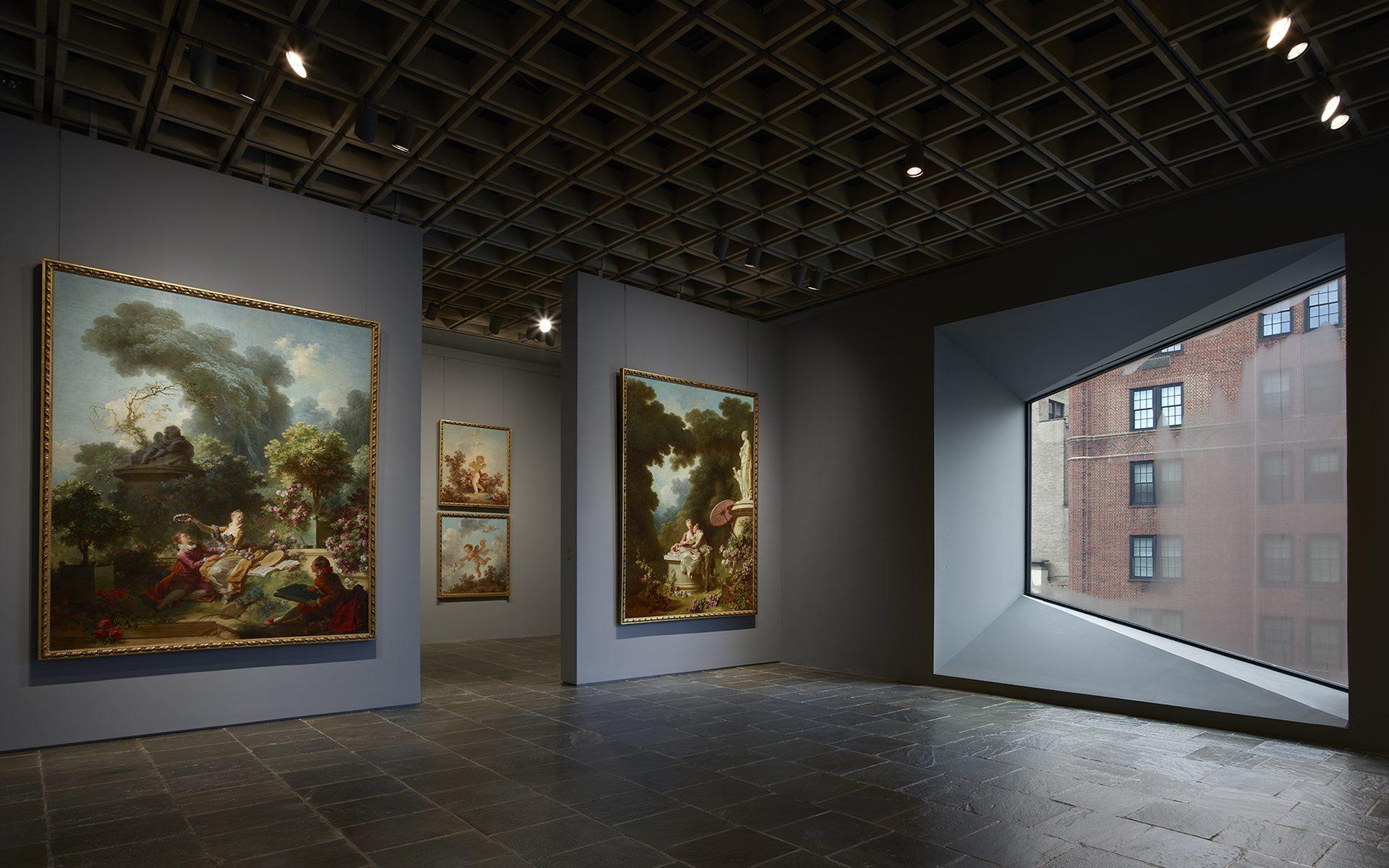 The Frick's collection of masterpieces by Fragonard in the new Frick Madison.
Photo: Courtesy of the Frick 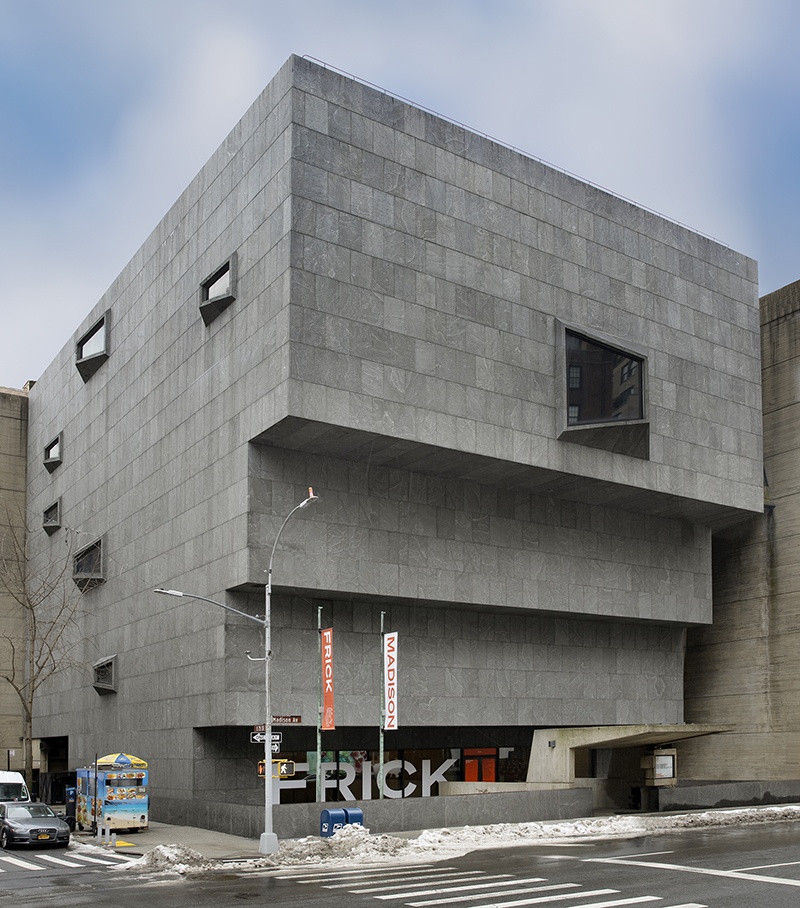 The facade of the Frick Madison in the Breuer building on Madison Avenue. Photo: Courtesy of the Frick

When the Frick Collection closed last year to undergo a massive $160 million renovation, its treasured collection of paintings, sculpture, and decorative arts had been on display in Henry Clay Frick’s Gilded Age mansion on East 70th street in New York for almost a hundred years. Now, for the first time ever, the majority of the collection has been relocated to a temporary new home at the Breuer, the Brutalist building at 945 Madison Avenue and 74th Street, which was formerly the site of the Met Breuer, and previously the Whitney Museum of Art, which commissioned the building in 1966 by trailblazing architect Marcel Breuer. 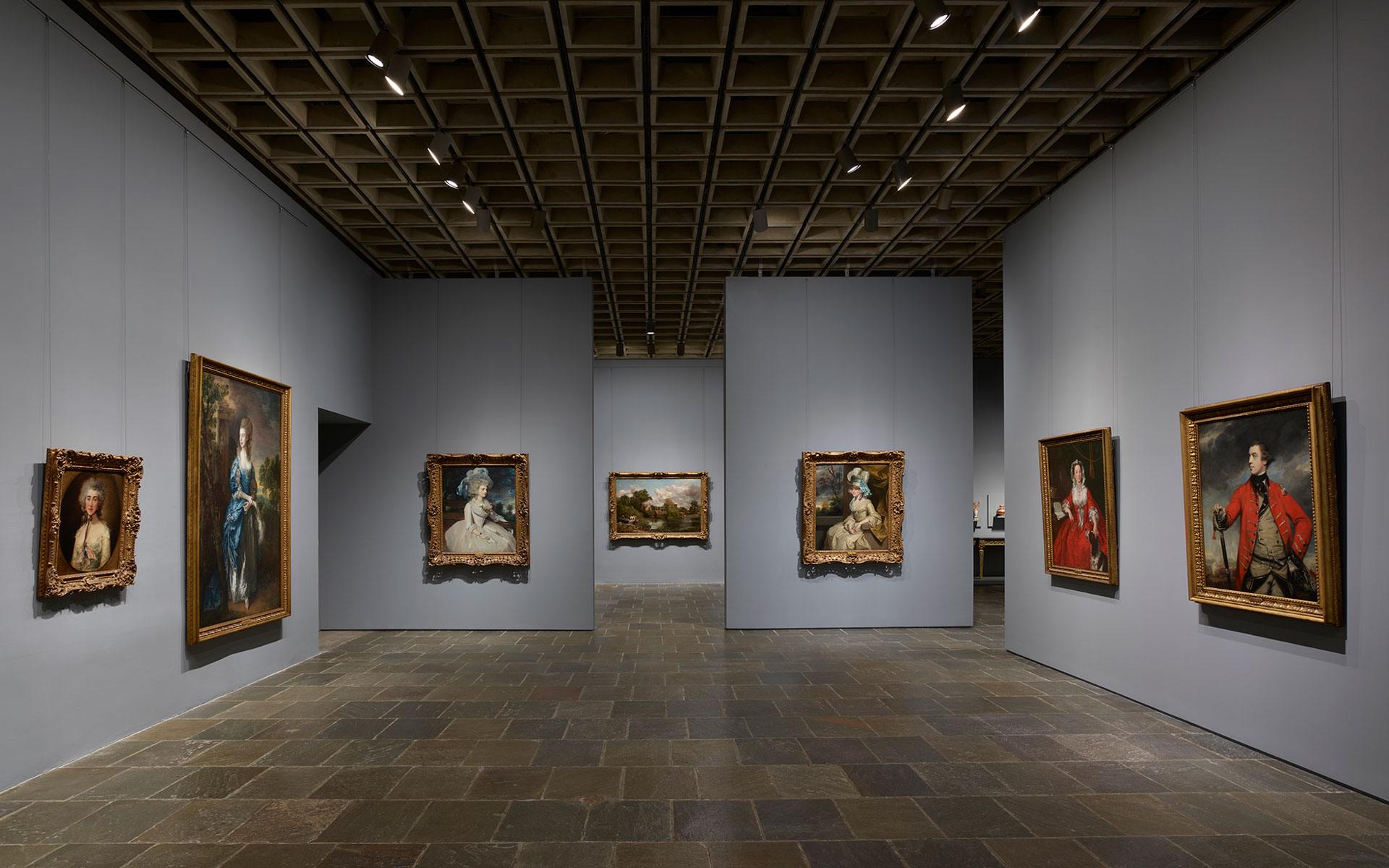 The British galleries at the Frick Madison. Photo: Courtesy of the Frick

In the absence of its usual domestic setting, the works are cast in a different light that offers plenty of opportunity for new readings and insights. Instead of a setting brimming with intricate embroidery, rich gold-trimmed velvets, and dark polished mahogany, the works are surrounded by an abundance of stone and concrete, sharp lines, and striking trapezoid windows. The contrast is striking and unexpected on a purely visual level, but the enormous space and three levels gave the curators a unique opportunity for fresh groupings.

In a departure from the Frick’s customary presentation, where art and design from all categories are dotted throughout the rooms in a residential style, here they are shown chronologically, by region, and media. The bold plan was masterminded by director Ian Wardropper and the curators in collaboration with institution’s longtime exhibition designer, Stephen Saitas, and Selldorf Architects, the firm behind the new space. 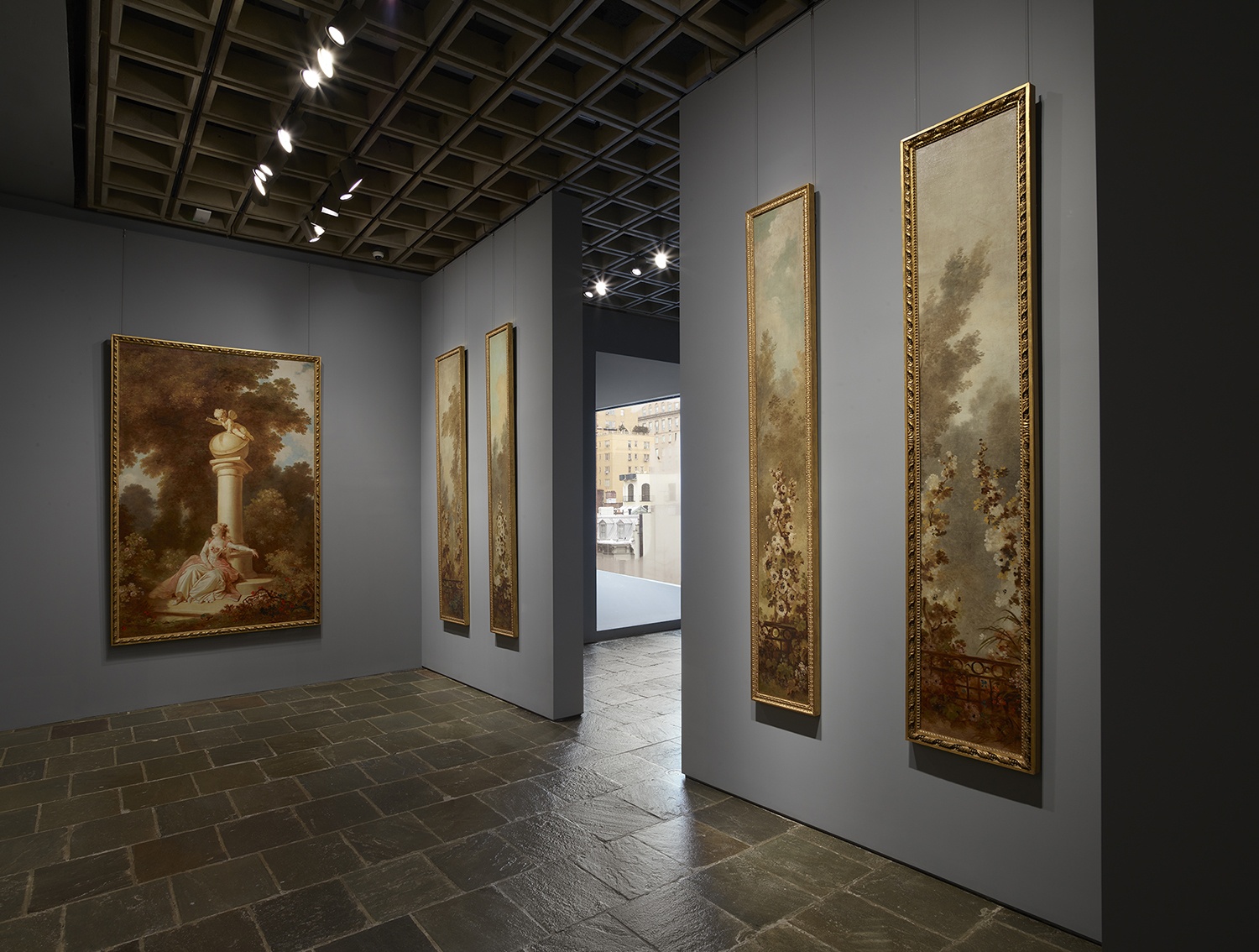 A group of masterpieces by Jean Honore Fragonard in the Frick Madison. Photo: Courtesy of the Frick

One gallery room, for example, showcases the entirety of the canvases by French Rococo master Jean-Honoré Fragonard, shown together for the first time in the institution’s history. Four are hung in the exact way that they were envisioned by the artist when they were commissioned by Louis XV’s mistress Madame du Barry. Even the size of the room at the Breuer is about the same as their intended home outside of Paris, but instead of the bucolic French landscape out the window, the buzz of Madison Avenue hums as yellow cabs whiz by. 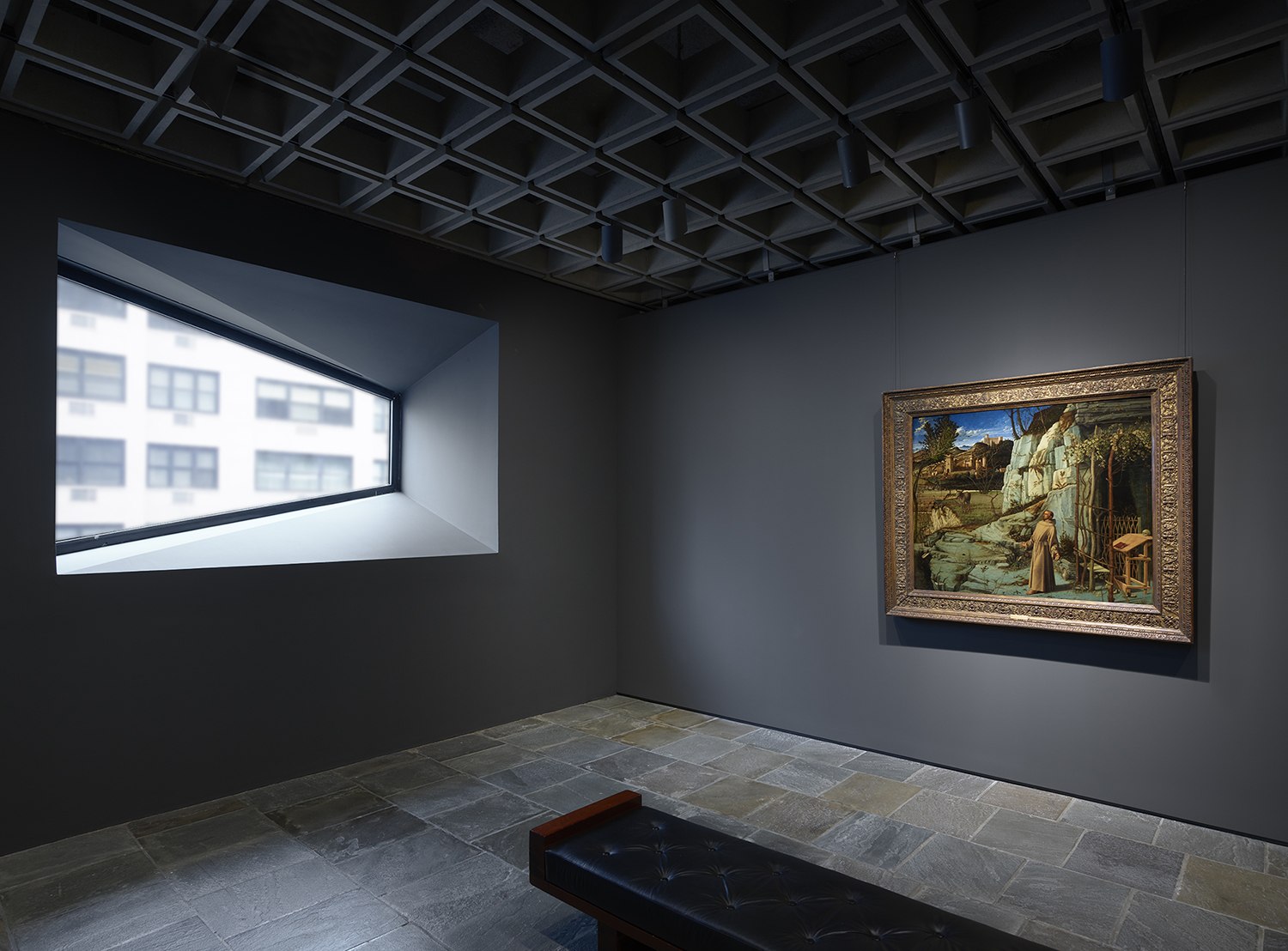 Giovani Bellini, St. Francis in the Desert. Photo: Courtesy of the Frick

Another unexpected discovery was the strength of British art collection. Grouped at Frick Madison for the first time, the curators noticed that it is by far the best represented in the collection. Seven canvases by Gainsborough, for example, are shown alongside portraits by Hogarth, Lawrence, Reynolds, and Romney, accumulatively representing almost 100 years of British portraiture.

One of the most important Renaissance paintings in the country—and certainly one of the most beloved at the Frick—Giovanni Bellini’s St. Francis in the Desert, gets the sacred treatment it deserves, shown in isolation in a room on the third floor. The display allows for a tranquil, churchlike moment of reflection of Breuer’s architecture, with the natural light from the window nearby providing a real-life comparison to the divine light depicting in the painting. 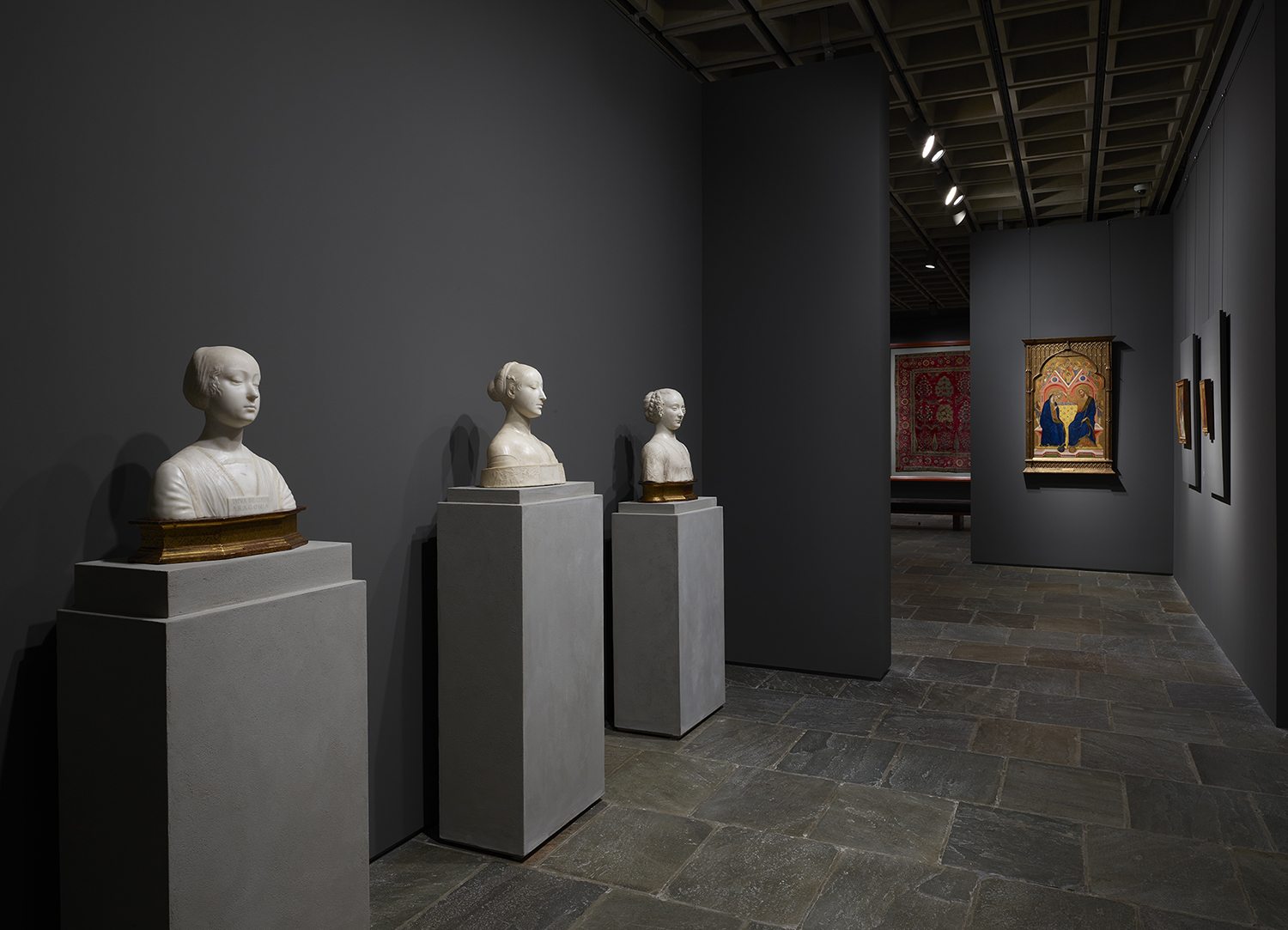 A series of Renaissance busts on view in the Frick. Photo: Courtesy of the Frick

Sculpture gets its turn in the spotlight, too. Often perceived as merely decorative at the mansion, here, the works given center stage. The Barbet Angel, for example, a large-scale 15th-century bronze, commands attention in its own room, where it can be admired from all angles. In another curatorial twist, a delightful floor-to-ceiling display of porcelain is organized by color, rather than by origin or the date of manufacture and is sure to impress. 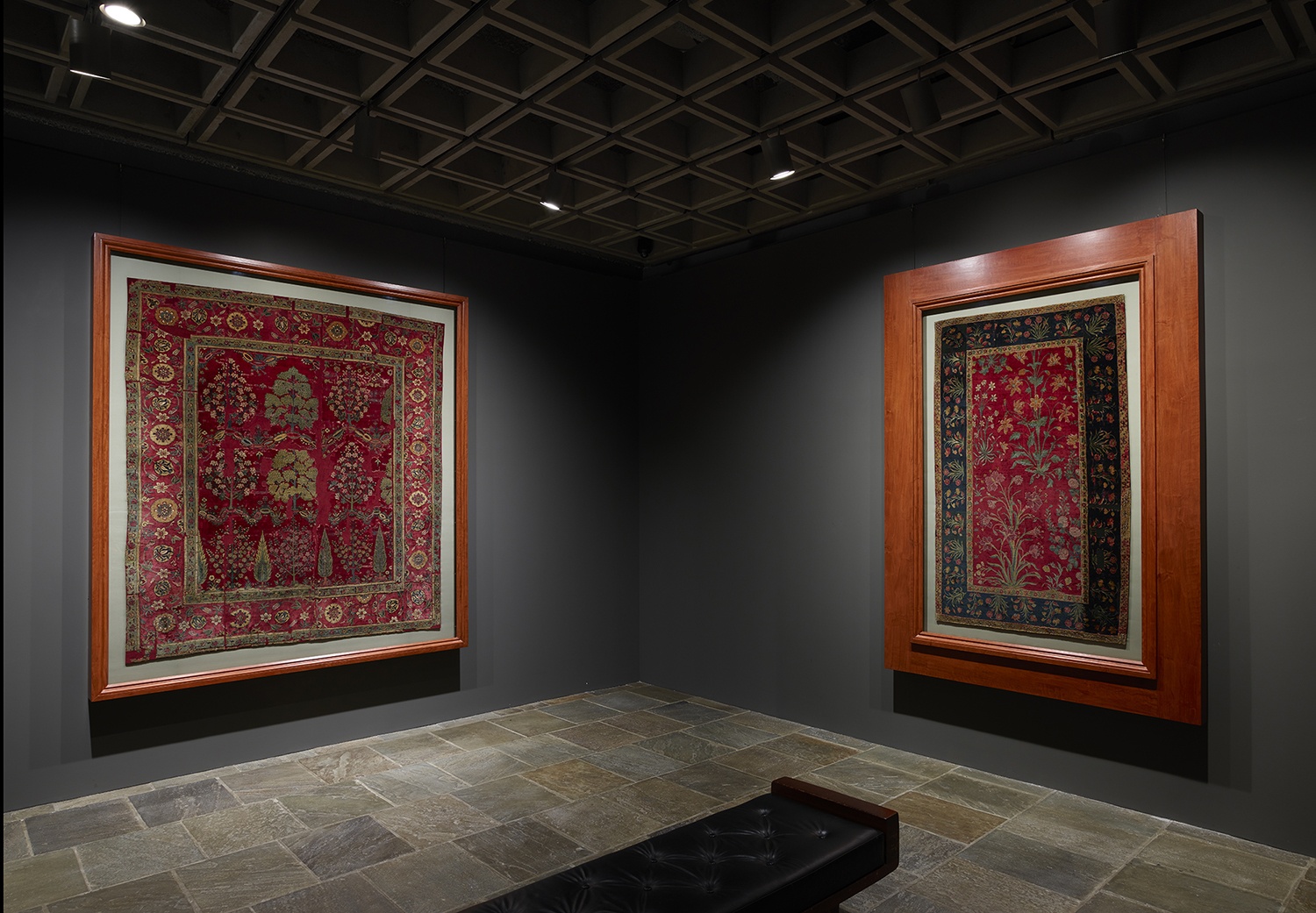 South East Asian tapestries at the Frick Madison. Photo: Courtesy of the Frick

Cover: The Frick's collection of masterpieces by Fragonard in the new Frick Madison.
Photo: Courtesy of the Frick
Next Post