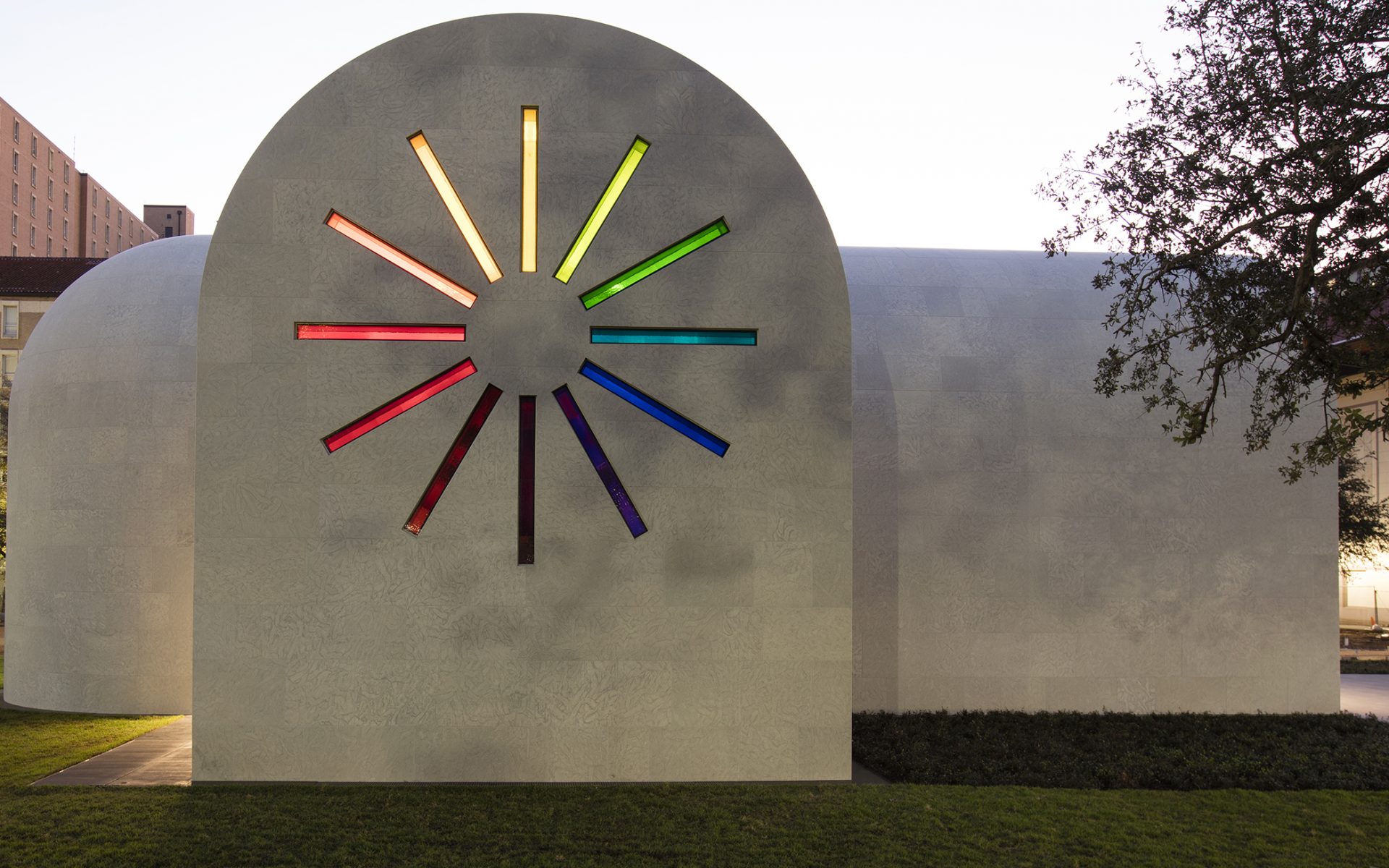 Despite having one of the largest collegiate art museums in the U.S. on its campus, the University of Texas at Austin has long been more of a draw for college-football fans than for contemporary art aficionados. But the February 18 opening of the only freestanding building designed by American minimalist Ellsworth Kelly—a chapel-like space conceived in 1986 and refined in the last years before his death, in 2015—has now elevated Austin as an art-world destination. The structure “is grand and intimate all at once,” says Simone Wicha, director of the university’s Jack S. Blanton Museum of Art. Titled Austin, it is part of the museum’s collection and sits on green space adjacent to it.

Informed by Kelly’s study of churches during his years in France from 1948 to 1954, and echoing such chapels as Mark Rothko’s in Houston and Henri Matisse’s in Vence, France, the 2,715-square-foot rounded white-stone building takes the form of a simple cross. On three of its sides, stained-glass windows—arranged alternately in starburst, grid, and tumbling-square patterns—reproduce the color spectrum. As sunlight shifts during the day, tinted reflections reminiscent of Kelly’s monochromatic geometric-shaped canvases appear on the floor and walls within. “It is extraordinarily calming,” says Wicha. “The world outside just disappears.” As a focal point, one of the artist’s totemic sculptures in redwood rises at the center, while the walls display 14 abstract black-and-white marble panels representing the Stations of the Cross. Stained-glass windows cast tinted reflections onto the floor and walls. Photo: Ellsworth Kelly Foundation, courtesy of Blanton Museum of Art, The University of Texas at Austin

More than 40 public artworks have sprung up around campus over the last decade. Overseen by the university’s Landmarks program, these long-term loans and site-specific commissions include a James Turrell Skyspace, on the roof of the student-activity center; poetic photographic portraits by Ann Hamilton, in the medical school; and a 160-foot-long abstract mural by José Parlá, inside a new business-school building designed by Ennead Architects. “For a lot of people coming to this university, it’s the first opportunity to have experiences with great works of art,” says Landmarks founding director Andrée Bober. The addition of Kelly’s final, monumental masterpiece has made that experience all the richer. blantonmuseum.org