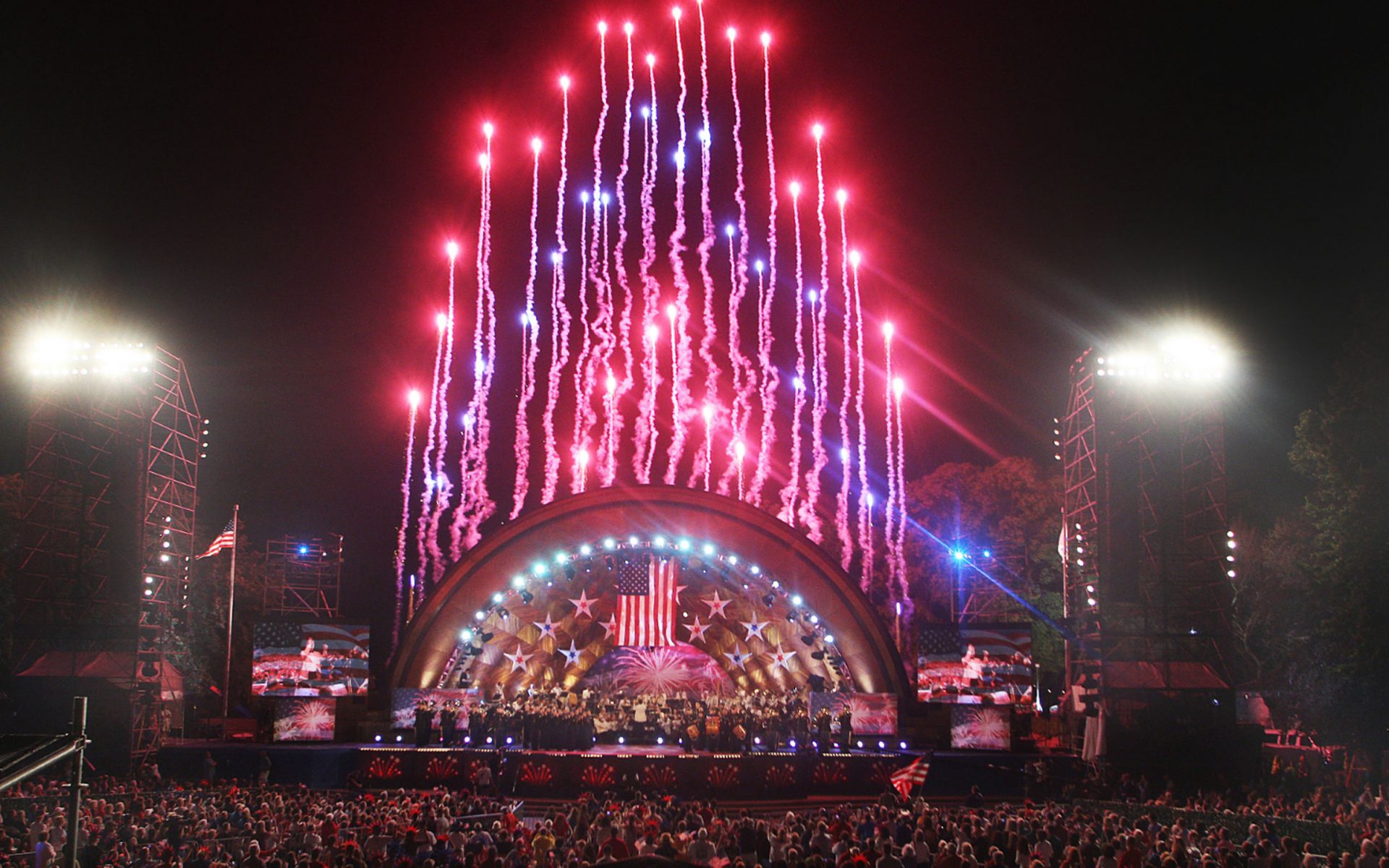 The 4th of July Spectacular at the Edward A. Hatch Memorial Shell on the Charles River Esplanade.
Photo: Courtesy of IMBoston

Make the most of Independence Day by checking out the fireworks from Boston to L.A.

No other holiday resonates quite as strongly here in the U.S. as the Fourth of July, which sees cities across the country throw patriotic parties marking the day the Thirteen Colonies officially severed ties with Britain. Since Independence Day is just around the corner, it’s time to start making plans for the festivities. Read on to find our editors’ picks of the best places to see the celebratory fireworks in seven major U.S. cities, from Boston to Los Angeles. The 4th of July Spectacular at the Edward A. Hatch Memorial Shell on the Charles River Esplanade. Photo: Courtesy of IMBoston

1. Boston
As the site of notable events like the Boston Tea Party and the Boston Massacre, the Massachusetts capital is rightfully considered the birthplace of the American Revolution. The best spot to see the fireworks and enjoy a show is the Hatch Shell, on the Charles River Esplanade. The Boston Pops Orchestra perform their annual 4th of July Spectacular on both July 3 and 4, this year headlined by musical guest Rachel Platten. 2. Washington, D.C.
For good reason, the most popular place to see the fireworks in Washington is the National Mall, where there’s always a magical display set against the backdrop of the Washington Monument. Also, be sure to check out the Smithsonian Folklife Festival, this year spotlighting the cultures of Armenia and Catalonia. Established in 1967, the event has long honored contemporary cultural traditions by inviting those who practice them to set up shop on the eastern half of the Mall. 3. San Francisco
The San Francisco Art Institute’s rooftop terrace is a go-to spot to view the fireworks since it’s open to the public and has sweeping views of the bay. If you’re there, be sure to check out the galleries within the museum, including the Diego Rivera Gallery, which is a student-run exhibition space and also features one of the artist’s most compelling murals.

Recommended: 7 New Art and Design Books to Indulge in This Summer 4. The Hamptons, New York
The Hamptons gets the party started early with the fabulous Grucci fireworks on June 30, at the 31st Annual American Picnic in Southampton, beginning at 7pm. That same night in Sag Harbor, the Sag Harbor Yacht Club hosts the John A. Ward Independence Day fireworks. (The best spots to see the show are Long Wharf, Haven’s Beach, and Marine Park.) For celebrating on July 4, check out Umbrella Beach at 9:15pm to see the fireworks show, sponsored by the Montauk Chamber of Commerce. 5. New Orleans
The Big Easy ups the ante with dueling barges of fireworks for the Go Fourth on the River Extravaganza. Any spot on the Mississippi riverfront will have great views of the show, however, if you want to be up close to the action steamboats offer fireworks cruises specifically for the celebration. Take a ride on the Steamboat Natchez or the Paddlewheeler Creole Queen with dinner and entertainment on board. The Griffith Observatory at sunset. Photo: Courtesy of Wikimedia Commons

6. Los Angeles
There are many venues to watch the fireworks in the City of Angels, however, our favorite is the Griffith Observatory. The famous Los Angeles landmark, featured in films like Rebel Without a Cause and La La Land, has spectacular views of the city as well as the iconic “Hollywood” sign. 7. Philadelphia
In Philadelphia, the Logan Hotel’s Assembly Rooftop is the hot spot to see the fireworks. The sophisticated lounge is situated nine stories above the city center and boasts views from the Benjamin Franklin Parkway to the Philadelphia Museum of Art. At street level the Wawa Welcome America July 4th Concert and Fireworks on the Benjamin Franklin Parkway will have performances by the Philly Pops Big Band, and this year it features Pitbull and Heather Headley.

Cover: The 4th of July Spectacular at the Edward A. Hatch Memorial Shell on the Charles River Esplanade.
Photo: Courtesy of IMBoston
Next Post