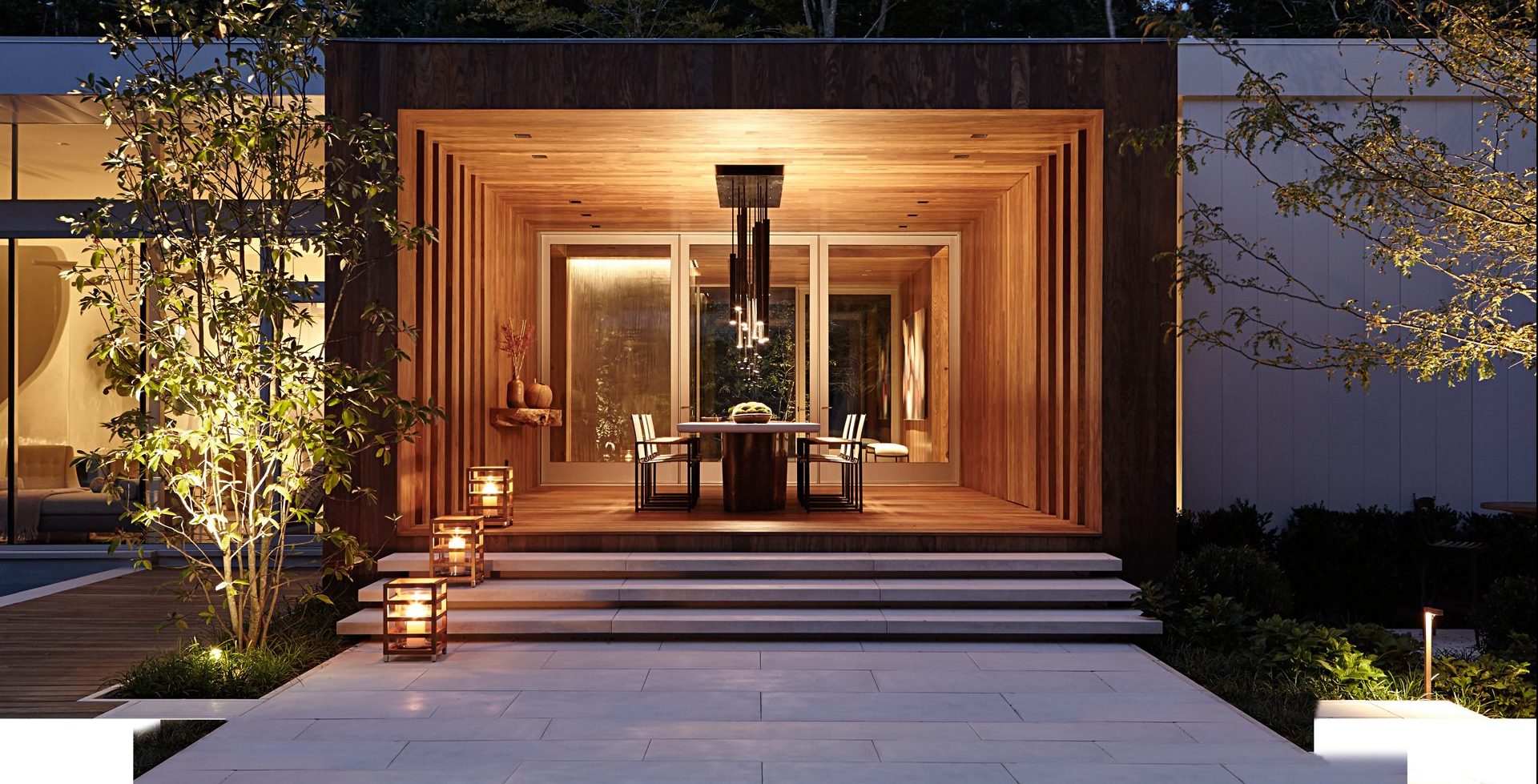 A Hamptons Renovation That Breaks Out of the Box

I was introduced to Gary Kline in the summer of 2012. He had recently purchased a modern spec house in East Hampton, New York, which needed “a little help.” It’s not unusual for our clients (or prospective clients) to ask for our thoughts on a property they’re interested in. The house was on a long, narrow, wooded lot, bordered by scenic easements that guaranteed privacy and quiet.

The house itself, however—a one-story shoebox clad in grey metal and which, in a failed attempt to “bring the outside in,” utilized bluestone pavers for the floors throughout—was cold, cold, cold. Our mission was to renovate, expand, and personalize this anonymous box. We strongly believe that our work is enhanced when we’re engaged with, rather than separated from, talented designers and consultants.

Just before starting this project, I had met David Scott when we were both asked to speak at an event that same summer. He presented a beautiful oceanfront design, and we chatted in a relaxed way that made it feel as if we had known each other for years. I thought this would be a great job for us to collaborate on. For months, David would spend the better part of every Friday in my office, and we would act as sounding boards for each other, our egos checked at the door. To Gary’s credit, he not only recognized this spirit during design reviews, he also dictated to everyone who would subsequently become involved that both David and I were to be consulted on pretty much any and all decisions moving forward. One of two light-filled bridges in the house connects the dining room to the two-story master suite. The floors throughout are cerused white oak. Photo: Joshua McHugh

As we delved into the project, a handful of realizations surfaced. First, materials would play a major role in this transition, in order to push back on the bland metal skin of the existing structure. Second, due to the proportions of the lot, we would be forced to approach the house at its narrow end, so a larger understanding of any design would be all but impossible upon entering. Lastly, due to site restrictions (again), we could add only to both ends of the structure, increasing its length even more. David’s juxtaposition of energizing pieces inserted into soothing backdrops, as well as his ability to conceptualize solutions for managing what were initially unwieldy, out of scale spaces took the home to another level. The mandate from the client was to create interior spaces designed for living, above all else. Three pivot doors separate the entrance foyer from the al fresco dining area. The wall on the right was painted by the Miami-based artist Alex Turco, through Studium, a New York showroom, and the table is by the British designer Tom Dixon. Photo: Joshua McHugh

We knew we wanted to create a clear way to find the front entry, a master suite, and a large home office. We decided that the major interventions were to be clad in wood—afrormosia, in this case—as a way to introduce a warmer material to help balance the metal. We began with what we called the “tube,” a rectangular box, that sliced through the middle of the house. The tube encompasses a new entry, a skylit entry wall where it intersects with the existing house, and a covered outdoor dining room as it passes through to the back yard.

The two-story master suite and home office are distinct wood boxes at either end of the house. Their solitude is emphasized by glass bridges that separate them slightly from the more public spaces. It is unusual in a house of this scale to be able to stand at one end and see all the way to the other. We felt we needed to modulate this condition in order to create intervals of spaces rather than one long hall. By lifting the floor of the tube three steps higher than the level of the existing floor, we created a visual pause between the two halves of the house as well as a connection to both the front and rear yards. The section of the living room that faces the pool and the free-standing pool house, designed by Blaze Makoid Architecture, is meant for more intimate gatherings. Photo: Joshua McHugh

I’m especially proud of these organically shaped, Venetian-plaster moments that counterbalance the more prevalent rectilinear geometry. While my business has transformed into three-dimensional computer modeling right in front of my eyes, it was energizing to work through these final shapes in full-scale mockups on site with the craftsmen who execute the work—and to reconnect with the craft of what we do.

So I was listening to an interview with a musician a few weeks ago, and like many other musicians I’ve heard in the past, many of their best songs were created in a day or less. Sometimes it can be in as little as 15 minutes. But the music that they work and work and work rarely hits the same height. Gary’s house is that project that has, for the most part, followed that initial napkin sketch. It just took that trusting client and the perfect team to realize it.