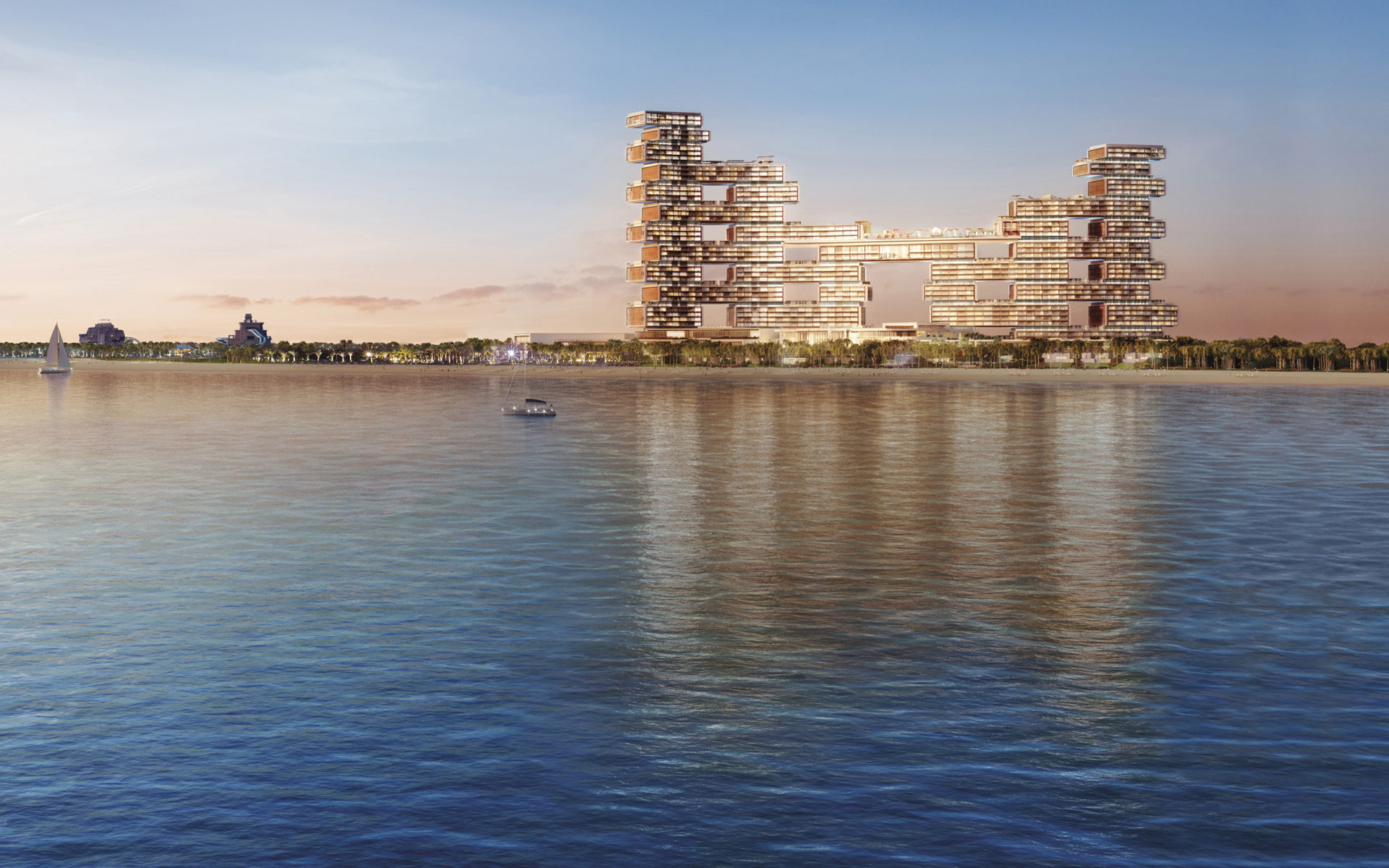 Is this Dubai’s Most Daring New Building?

There’s an unrelenting pressure in Dubai to push the design envelope, as evidenced by the seemingly endless parade of towers etched into the skyline. So it’s no surprise that after opening the Atlantis resort on the city’s Palm Jumeirah in 2008, Kerzner International decided the neighboring 25-acre plot called for another striking silhouette.

The subsequent design competition for the so-called Royal Atlantis Resort & Residences was won by one of New York’s top architecture firms, Kohn Pedersen Fox (KPF), whose past projects include the Peterson Museum in Los Angeles and Manhattan’s One Jackson Square. The stacked building is located on the outer ring of Palm Jumeirah in Dubai. Photo: The Royal Atlantis

“The brief was to create the next iconic hotel and residential building in Dubai,” says Elie Gamburg, KPF’s design director. “But there’s not really a shape that hasn’t already been built.” Instead, their design approach was to create “a set of experiences.” A night view of the 46-story edifice. Photo: The Royal Atlantis

The first is a seamless transition from indoor to outdoor living. “The biggest criticism of apartment life there is the minimal amount of outside space,” Gamburg notes, explaining why many of the 231 condominiums will incorporate generously-sized private terraces. Of course, with the city’s scorching temperatures, which can climb to 122 degrees, a novel approach was required. “We thought a lot about passive ventilation and solar control,” he says. “The idea was to have these shaded courtyards—but how do you create them 45 stories in the air?” The solution was to break the traditional slab building into a network of terraces, most of which will have their own pools. Many of the private sky courts come with their own pools. Photo: The Royal Atlantis

Due for completion in the fall of 2019, the gate-like edifice (which will also hold a 795-key hotel) will add a playful panache to the cityscape. “You can think of the building as a stack of Lego blocks,” Gamburg adds, each piece sculpted in a gently undulating fashion. “The shape is partially about optimizing views, but it’s also about maximizing lateral winds,” he continues. “You’re in a zone with the gulf behind you and the lagoon in front of you, so there’s a constant breeze coming from one direction.” An example of the “zenith” palette—inspired by the city’s golden midday light—in a master bedroom. Photo: The Royal Atlantis

For the glamorous interiors, Kerzner tapped Paris- and Florence-based designer Sybille de Margerie, who devised three sumptuous collections. “The palettes were inspired by the light from sunrise to sunset in Dubai; how the silver gray in the morning turns gold in the middle of the day, before rose gold copper at dusk,” says Geraldine Fourmon, de Margerie’s international project coordinator. One of the development’s many jaw-dropping pool areas. Photo: The Royal Atlantis

Other spectacular features include a Bellagio-style dancing fire-and-water feature masterminded by WET near the entrance and an infinity pool by David Mexico Design Group, located some 300 feet above ground on the building’s skybridge.