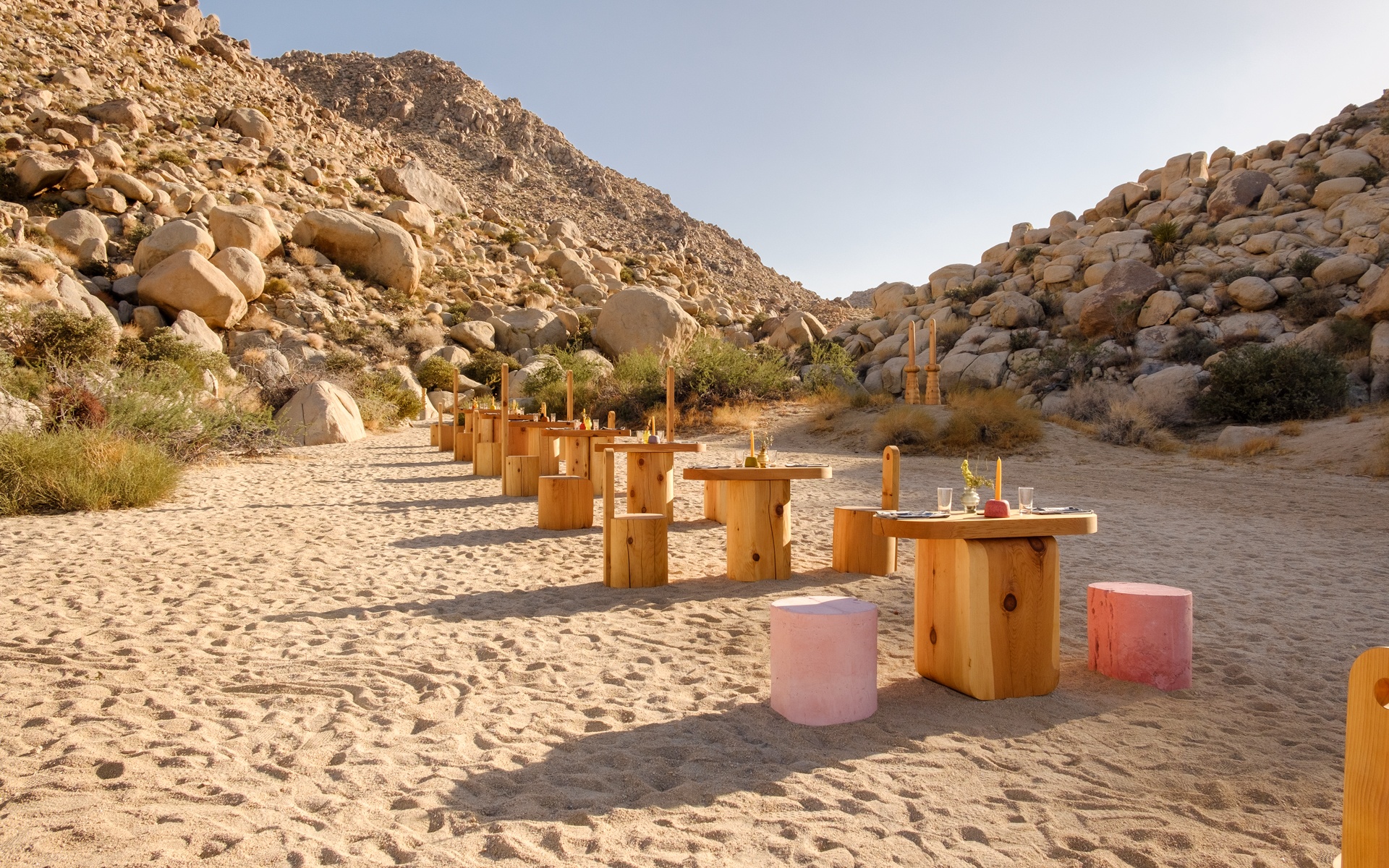 With help from Andrea Zittel, the owners of La Copine, and a bevy of local craftsmen, Anderson conjures an artful feast in a spectacular setting 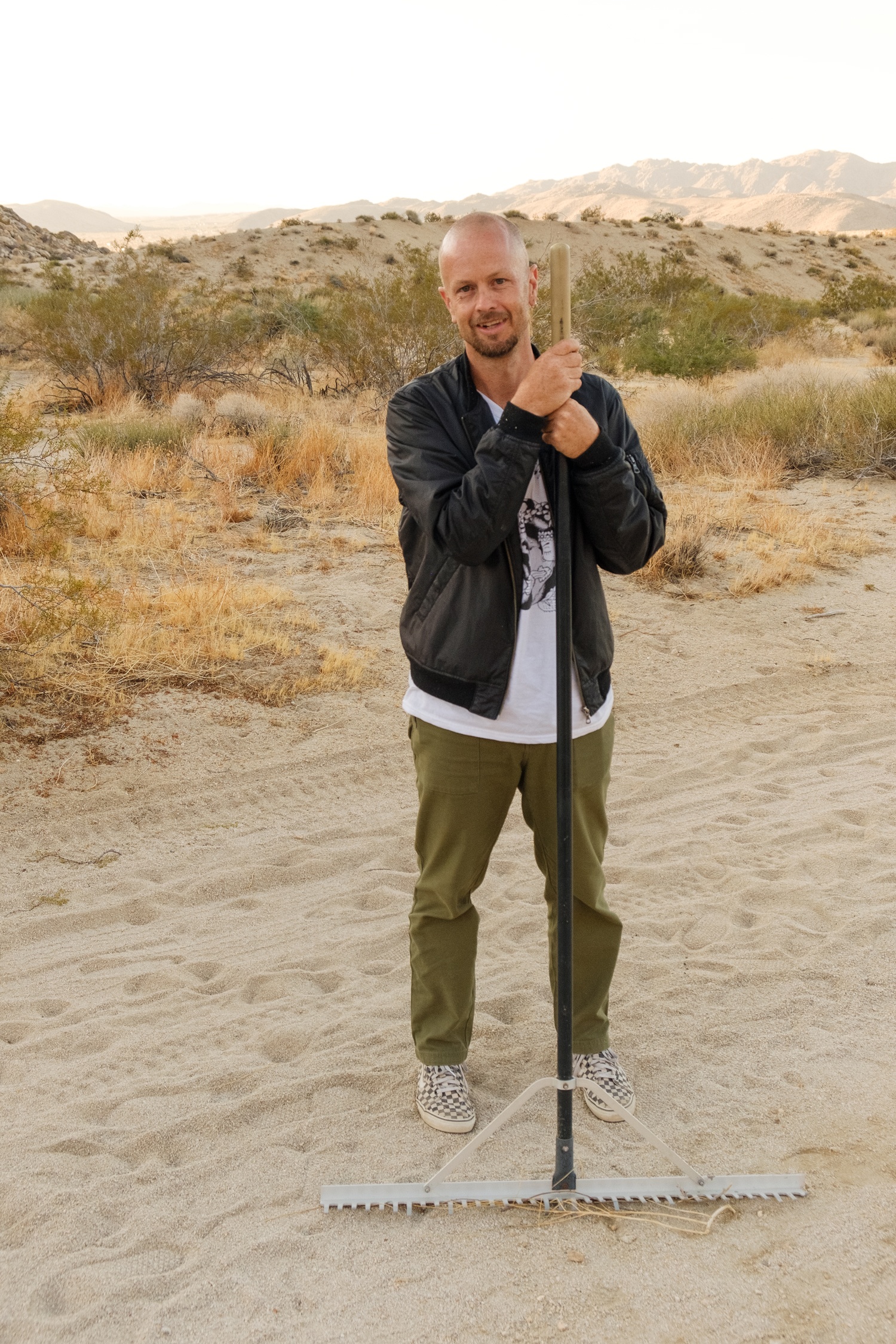 Dan John Anderson was first introduced to Joshua Tree in Southern California ten years ago when, through a series of fortuitous events, he met the artist Andrea Zittel. In those early days, Anderson—whose monolithic wood sculptures were the subject of a recent solo show at Playmountain and Curator’s Cube in Tokyo—worked for Zittel as an all-around handyman at her legendary encampment AZ West, where she designs and produces furniture, clothes, food, and other objects.

To mark his decade-long anniversary with the area, Anderson decided to create a dinner celebration in a dry creek bed (called a “wash”) on Zittel’s property. “I got to know and fall in love with the desert through Andrea. To see it through her eyes was a real stroke of luck,” noted Anderson, who hails from rural Washington. “So I asked her how she felt about me doing something in that beautiful, quiet space surrounded by boulders.” With Zittel enthusiastically on board, he set about finding co-conspirators for what became a series of three dinners—one each on a Friday, Saturday, and Sunday—in late October, in this magical place. 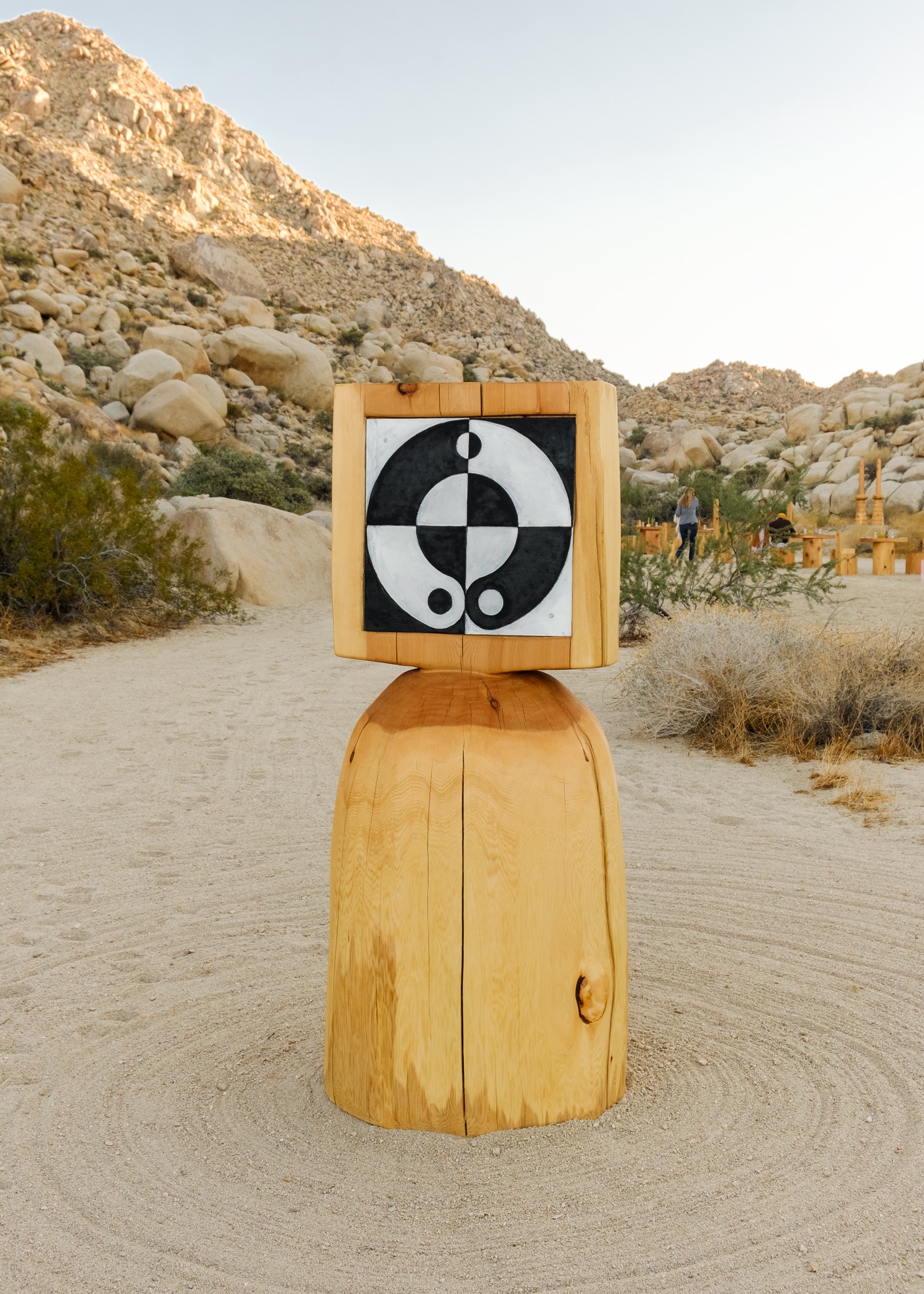 A black and white sculpture by Anderson signals the guests had arrived at their destination. Photo: Laure Joliet 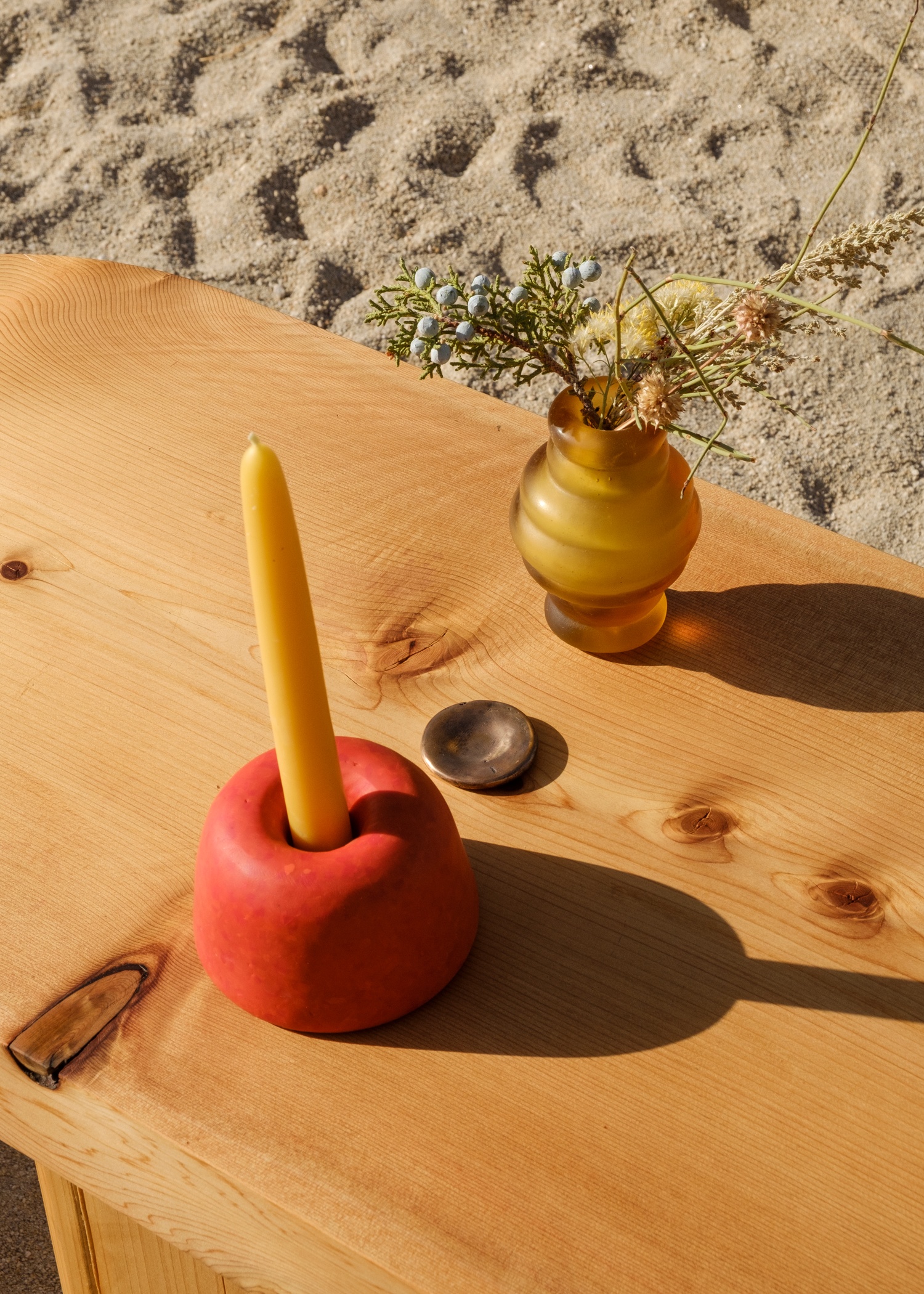 Nikki Hill and Claire Wadsworth, owners of the wildly popular La Copine in nearby Flamingo Heights, agreed to cook the five-course meals on-site. From that moment, Anderson had just six weeks to realize the rest of his plan. It sounds like plenty of time, but considering his vision included custom made tables, chairs, dinnerware, and associated accessories—not to mention some of his signature totems for decor—it was a race against the clock. “I felt like I got possessed by this idea,” he tells Galerie.

While these dinners marked a personal anniversary, they were also a professional opportunity to showcase new works created by himself and others, as the invitation-only guest list included collectors, gallerists, and others from the worlds of art and design. (Each guest paid $230 for the experience, with all profits benefitting a local food bank.) 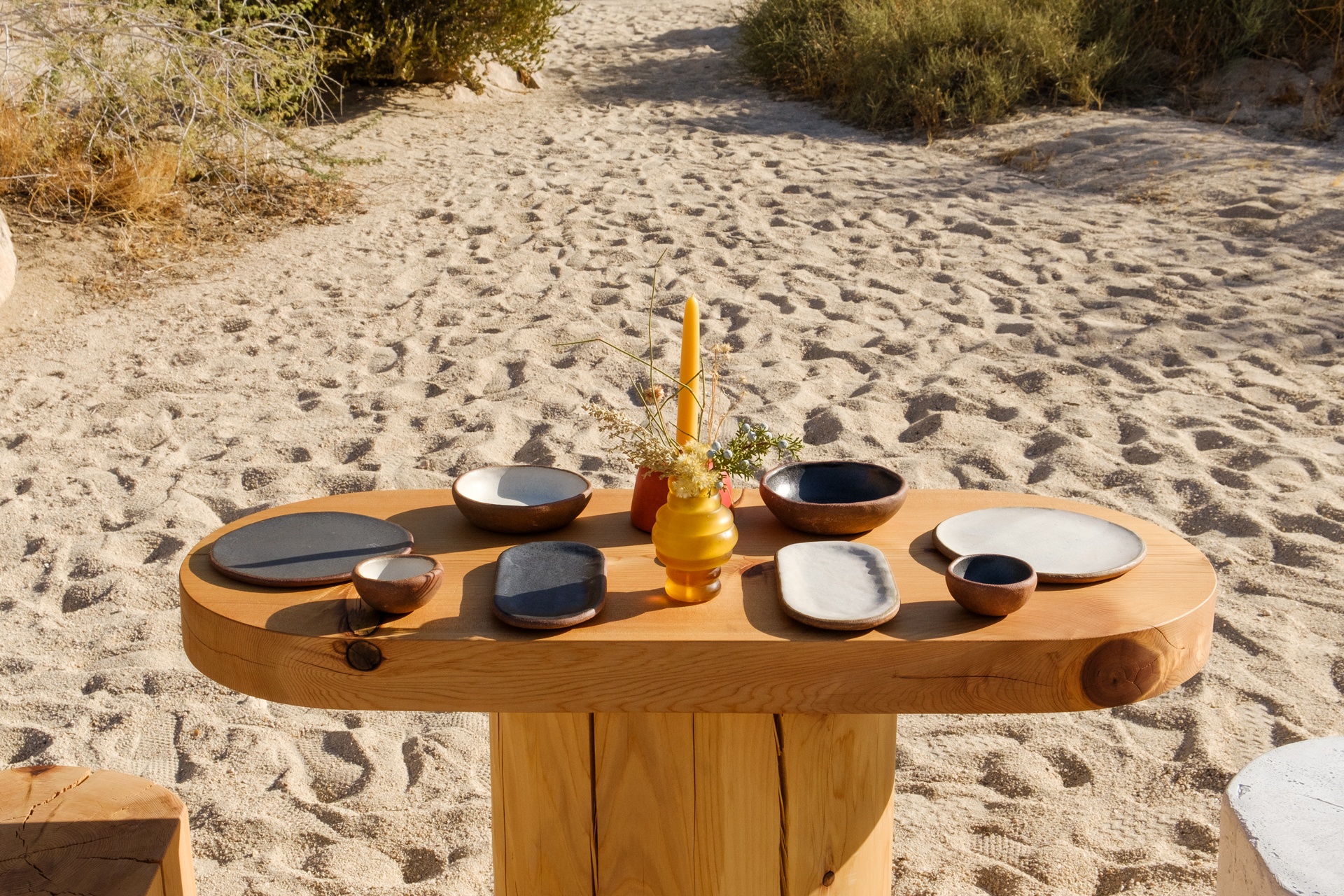 Table settings were a collaboration between Anderson and other local artists. Photo: Laure Joliet

When the guests arrived at the appointed time, they were greeted by Anderson’s wife, Genevieve Dellinger, and their 15-month old daughter, Uschi, who took everyone’s temperature, and set them off on the quarter-mile journey that wound through Zittel’s compound, to the site. There were stations along the way where guests would be presented with a welcome cocktail or a variety of pintxos (small snacks), perched on pedestals designed and made by Anderson, before arriving at a black and white sculpture, also by Anderson, signaling their arrival at the evening’s festivities.

9 Top Designers Reveal How to Set the Perfect Holiday Table 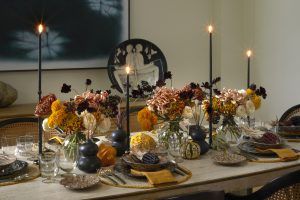 Ten cedar tables for two were spread eight feet apart along the wash; each was hand crafted by Anderson resulting in what he describes as “heavy monolithic” pieces that sunk into the sand. Anderson also made the mis-matched collection of accompanying chairs—most were cedar but some were an exploration into using cast concrete. Table settings were a collaboration between Anderson and other local artists. Cast-glass candle holders and bronze “worry stones” were made with Heidi Schwegler, founder of Yucca Valley Material Lab. The latter were both a soothing item to stem pre-election anxieties as well as “a way to get the element of bronze on the table.” Tayler Straziuso of Stray Ceramics made all the dinnerware and serving pieces, and Kyle Simon and Sarah LaChance of Farrington Press helped make the block-printed napkins. 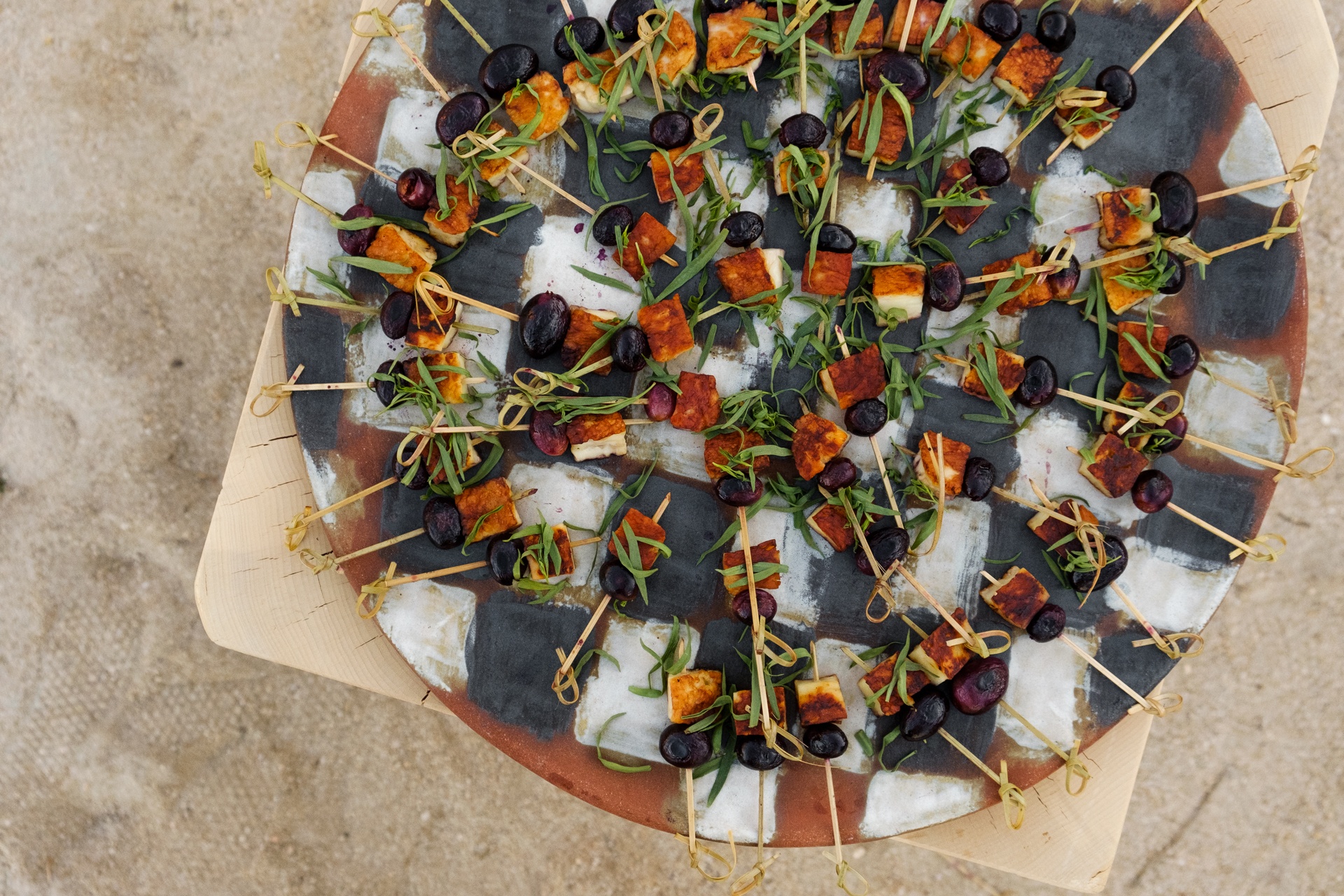 “I believe these objects have an energy unto themselves, and add reverence for the experience,” said Anderson. “The guests are the final component, they activate the experience, which becomes the art.” The sold-out series was so well-received that Anderson is pondering a repeat performance.

“You can’t screw up in in this space, it’s so impressive. To be out here, feeling comfortable, and having this amazing food was a pretty magical experience.” 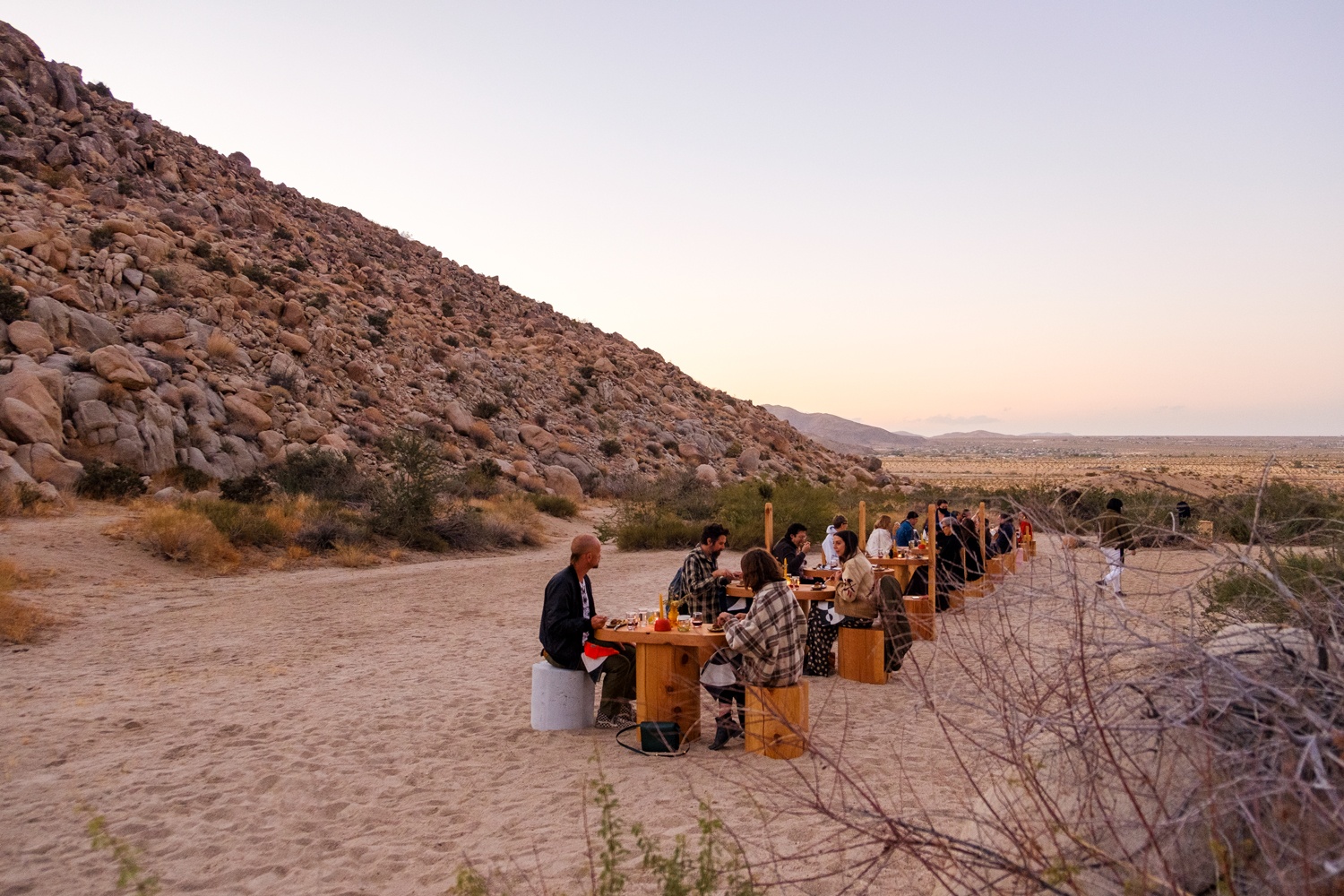 Guests at one of the dinner parties. Photo: LAURE JOLIET