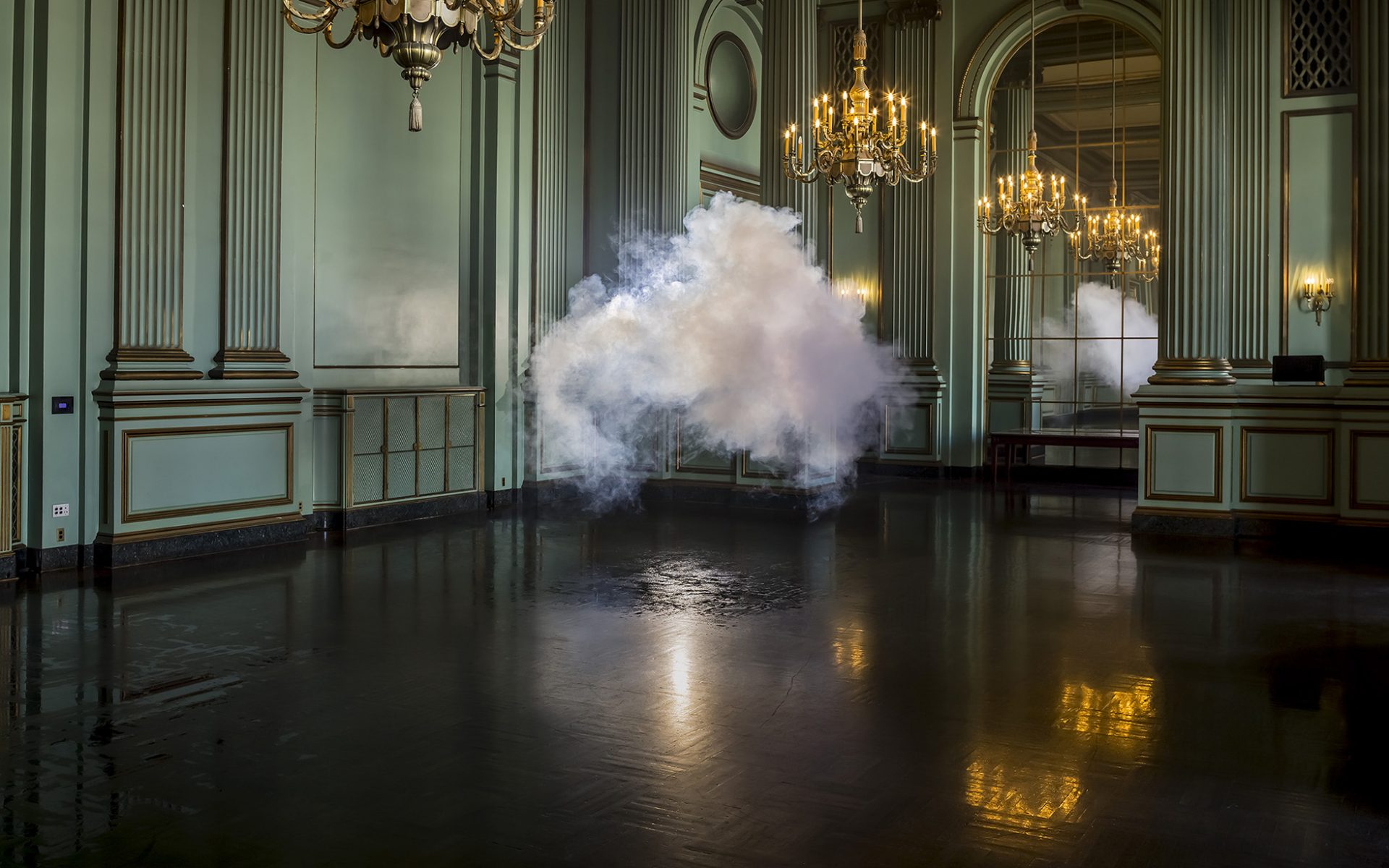 Berndnaut Smilde’s Ethereal Clouds to Take Over the Armory Show “Don’t let one cloud obliterate the whole sky,” Anaïs Nin once famously said. Dutch artist Berndnaut Smilde, who orchestrates momentary indoor cloud installations, does not worry about that either. Instead, his is artificial clouds materialize as pillowy puffs, vanishing from the air as fast as they appear, leaving viewers both amazed and curious. Next week, New Yorkers will have the chance to catch, quite literally, Smilde’s work at Pier 54 during the Armory Show. As part of the fair’s Platform projects, the artist will create his vapors at unannounced times inside a theatrical corner set replicating a midcentury living room with wooden floors and teal plasterboards.

“I like the idea of space within the space. You could look across and see where my stage ends and the actual fair begins,” the artist tells Galerie from his home in Amsterdam before he heads stateside for the project he calls “Breaking the Fourth Wall.” As a theatrical term, “the fourth wall” represents the border between the play and the audience that separate reality from fiction. The artist approaches the idea as a way “to intermingle with the surrounding using a tool similar to a stage where the space is perfectly artificial.” The presence of a natural occurrence inside a synthetic setting challenges the composure, “getting into the public’s way” in his words. Amidst the typical fair chaos, the installation will offer a slice of serenity. Of course, the possibility of coming across one of the cumulus-like fluffs may be slim due to their ethereal and temporal nature; however, Ronchini Gallery will exhibit and sell photographic documentation of the rare moments and accept Bitcoin in lieu of old-school dollars. Separately titled as “Nimbus Powerstation,” the photo series enables the artist to defy the ephemeral nature of his installation, while toying with technological advancements in lens-based practice.

At first sight, the clouds appear suspended above eye level within domestic interiors, suggesting a likely involvement of photoshopping techniques. Yet in reality, the image is perfectly authentic with its mixture of nature and fabrication. “For me the photograph is the work. Not different than traditional photography, I document something bygone,” asserts Smilde who understands that the public will also create their own photos. Those who are at the right place at the right time will share their shots and selfies in social media, celebrating a specific moment in time only experienced by a few. In other times, the set will be empty and clear the stage for a cloud to pop up. Despite its wow effect, the cloud-emanating mechanism is surprisingly straightforward, primarily utilizing water and smoke for its rendition. The process begins with showering the air with water from a spray bottle. When the water particles meet the smoke deriving from a fog machine, they amalgamate and float together on the condition of desired humidity level and a wind-free environment.

Beneath its technical process and intangible nature, the work pays homage to classical European painting, especially to the Dutch school, which put emphasis on depicting the sky as symbol of divine power. “I am interested in the myths and phenomena we project onto natural occurrences, such as clouds, rainbows, or the Dutch light,” admits Smilde, referring to the lustrous reflections of large water masses that cast gleams onto clouds in the Netherlands. While this occurrence inspired many painters throughout history, the artist certainly pioneered a present-day method of saluting the legacy.