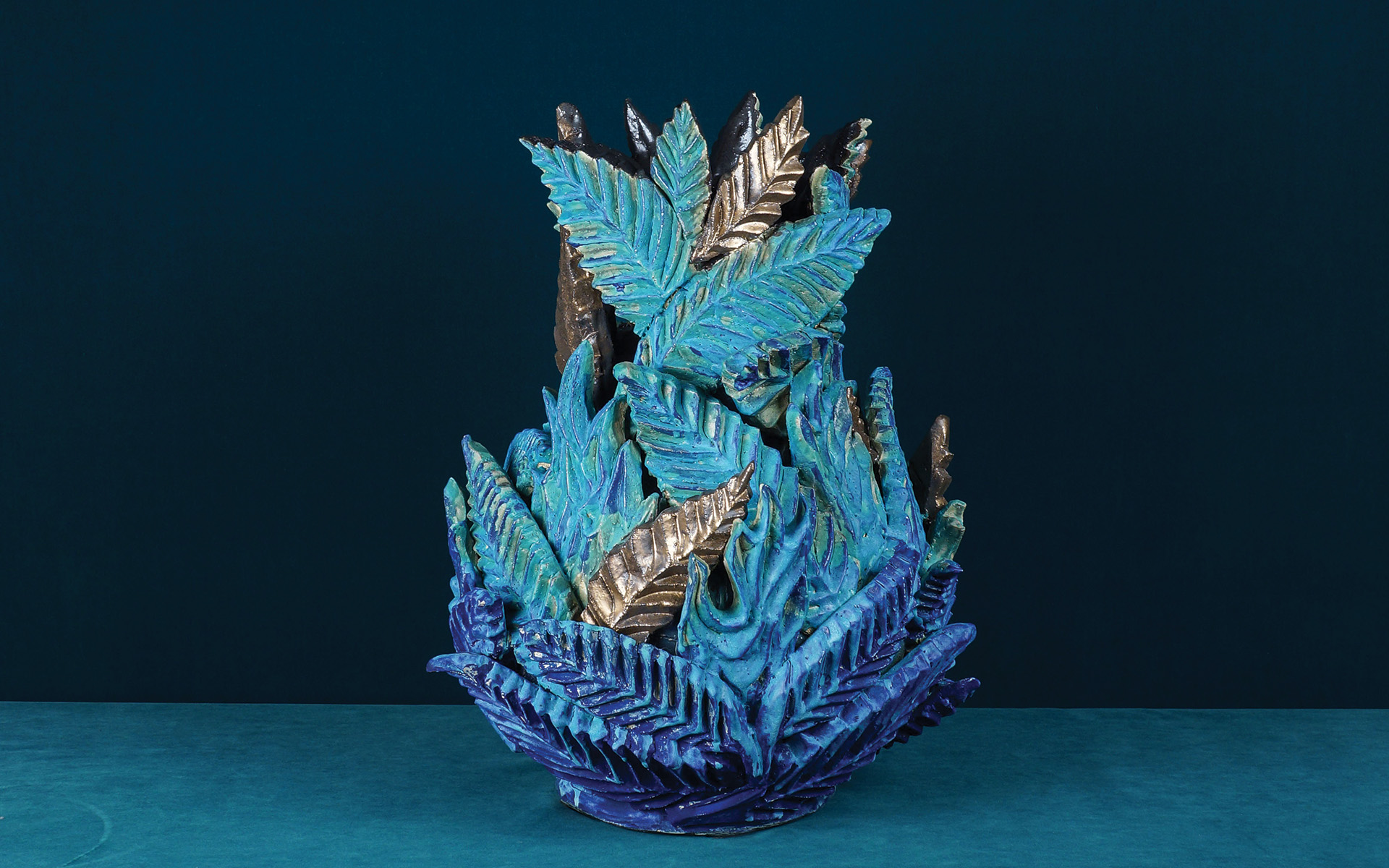 The first in a series of works based on toxic plants, Christopher Maschinot’s Blue Leaf vase was made for the 2021 exhibition “Scrape & Scratch” at Culture Object.
Photo: Courtesy of Culture Object 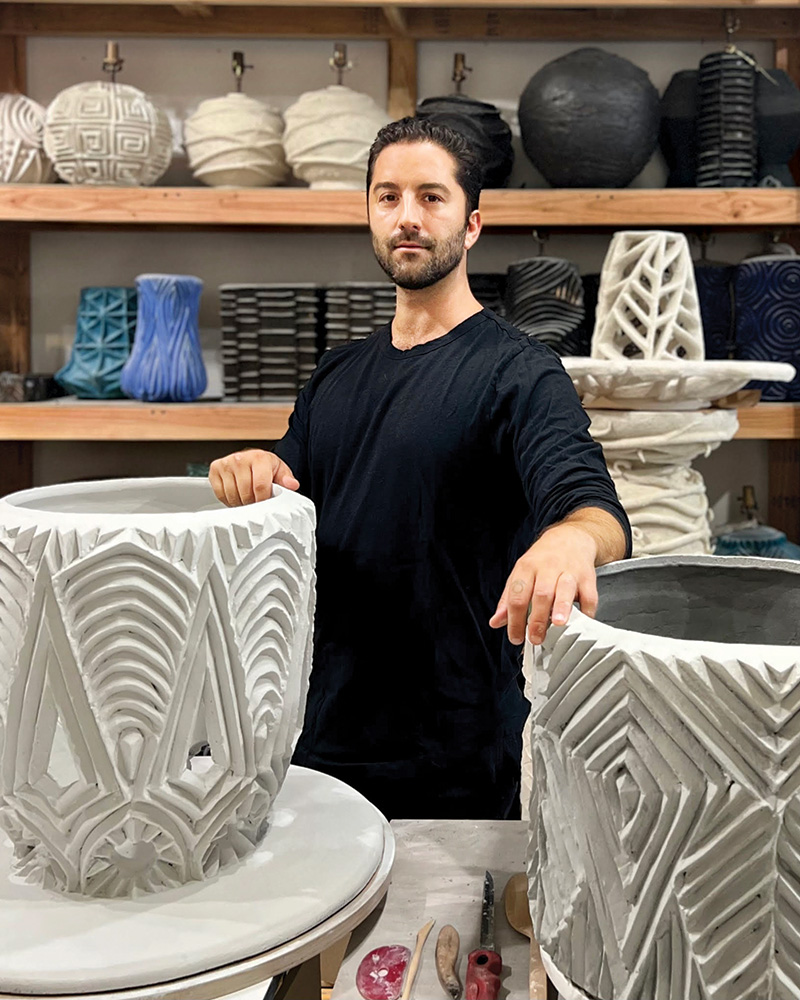 For as long as Christopher Maschinot can remember, clay has been an important element in his life. The fast-rising ceramic artist originally hails from Georgia, where his uncle is a master of raku ware, a traditional type of Japanese pottery that is hand-shaped rather than thrown.

“I used to walk around his studio and ask him how he made certain forms or color glazes,” recalls Maschinot. “I was always amazed by the alchemy of it all.” Today, his own brand of wizardry has taken the design world by storm, in part due to a prodigious creative output that encompasses statement-making vessels, planters, furnishings, lighting, and accessories.

This past fall, his captivating creations were the subject of a solo show, “Walk Don’t Run,” at Studio Tashtego gallery in Cold Spring, New York. “I chose to honor the surrounding Hudson Highlands,” he says of the exhibition. “That’s where I go for a hike with my dog when I need a quick escape from the city.” Maschinot presented new functional works adorned with floral motifs as well as solar-influenced patterns—all imparted with an imperfect, wabi-sabi quality that can be achieved only by hand. An ivory-color side table, for instance, appears wrapped in the tendrils of a creeping vine that seductively coils around its shapely silhouette. The weblike body of a striking table lamp resembles tangled tree branches, and a rugged chair evokes the Hudson River, featuring rocky bronze outcrops amid a sage-green swirl of geometric currents. 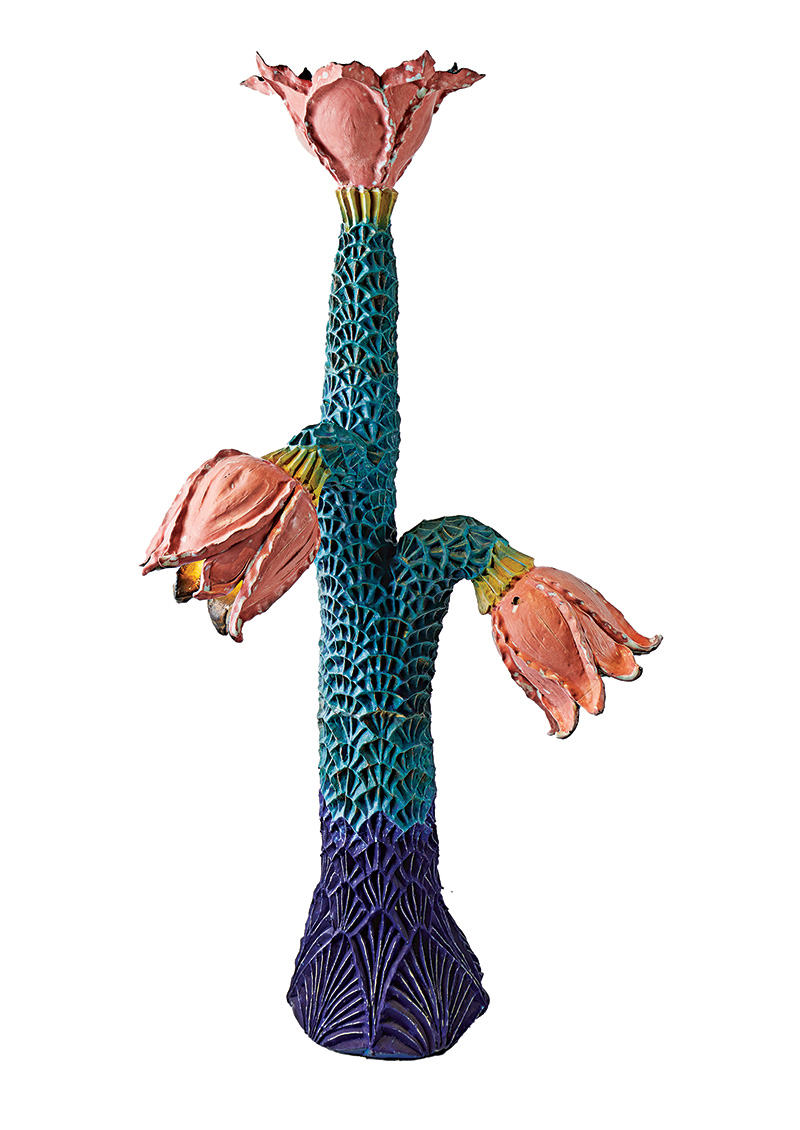 But the natural world wasn’t always his muse. When Maschinot first moved to New York a dozen years ago, he took his cues from the surrounding cityscape. “I was making a lot of work with an irregular grid pattern to match the ordered chaos of the city,” he explains. “After being here so long, I’ve really started to miss nature, and a lot of my work is now based on that longing.” 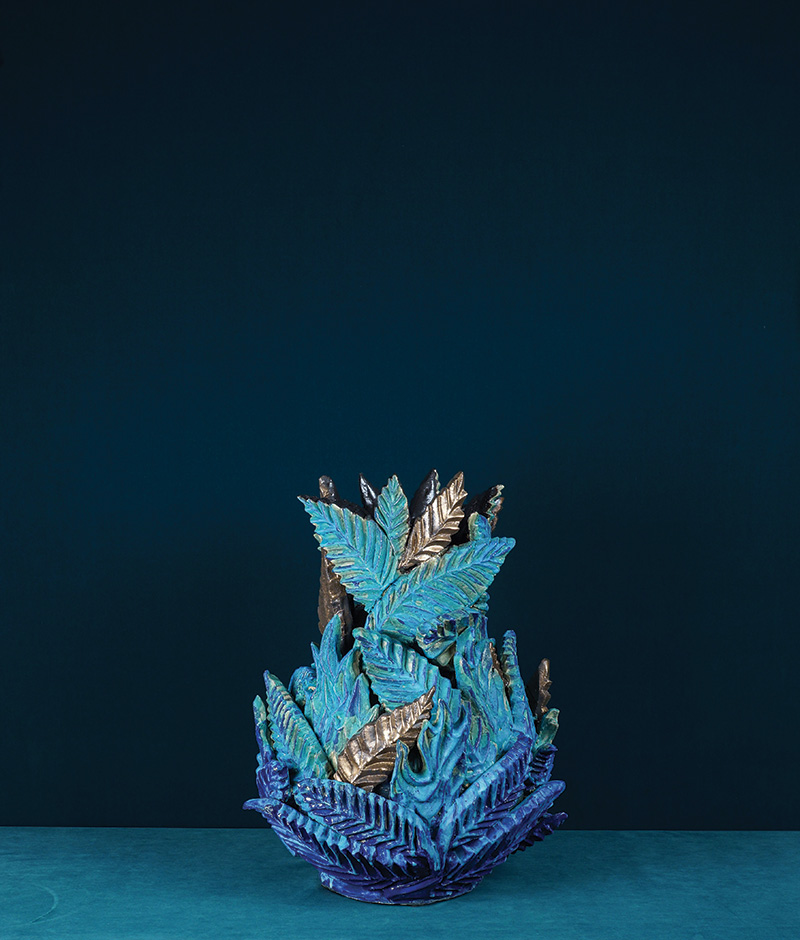 The first in a series of works based on toxic plants, Christopher Maschinot’s Blue Leaf vase was made for the 2021 exhibition “Scrape & Scratch” at Culture Object. Photo: Courtesy of Culture Object

“Clay really forces you to be patient and slow down”

That yearning has been abundantly clear in several group shows at Culture Object, the midtown Manhattan art and design space founded by Damon Crain. For the group show “LIT: Are We Not a Shining Light?” which ran earlier this year, Maschinot crafted a trippy floor lamp in the shape of a massive, almost menacing flower with a trio of pink blossoms, each cradling a lightbulb. Toxic plants have sparked a series of delicate vases sheathed in leaflike arrangements with ethereal glaze treatments. 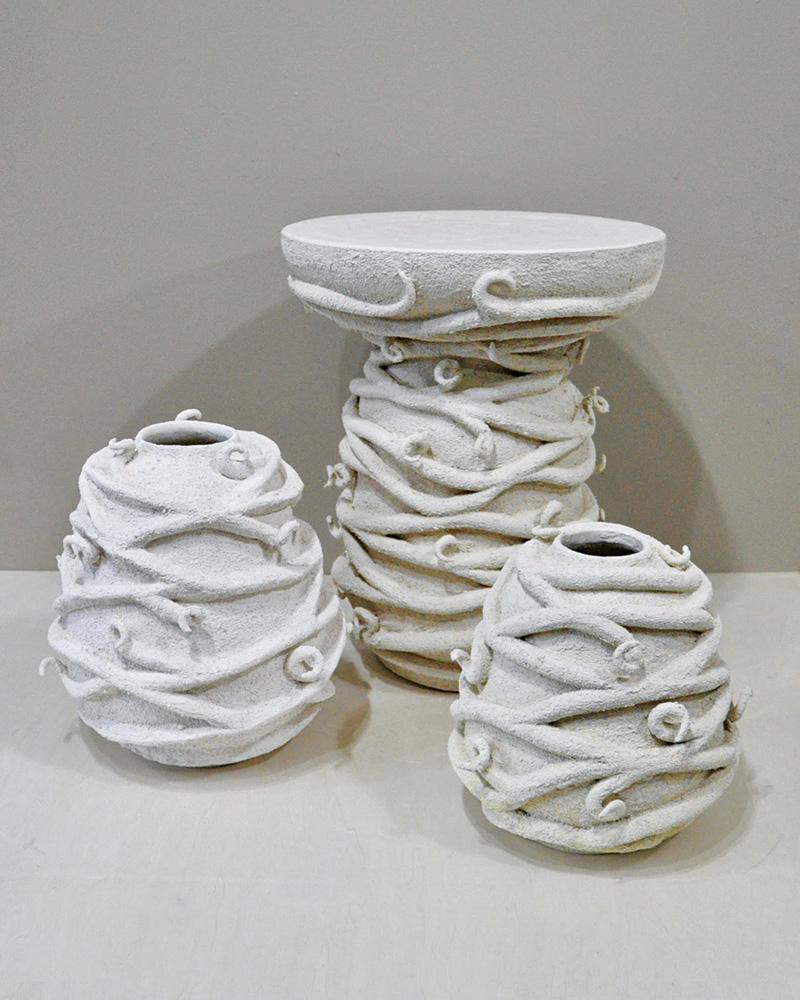 Works from his show at Studio Tashtego. Photo: Courtesy of the artist

Now he’s exploring more figurative territory, making a sculptural wall hanging of a chartreuse face silhouetted against a rounded bronze mirror, displayed in one of the gallery’s fall group shows, “Transcendental Objects.” His sculptures are also the subject of the current show at Alanna Miller gallery, “Hold On,” which is on view through December 22 and focuses on collaborations with fellow artist Anna Oliver.

And while ceramics have been a lifelong passion for Maschinot, he still finds persistence to be the most challenging aspect of the creative process. “Clay really forces you to be patient and slow down,” he says. “I always have more ideas than time and space to create them, so it’s important to remember to be patient and trust that I will get to the good ones eventually.” If the present is any indication, he’s already there.

A version of this article first appeared in print in our 2022 Winter Issue under the headline “Natural Instincts.” Subscribe to the magazine.

Cover: The first in a series of works based on toxic plants, Christopher Maschinot’s Blue Leaf vase was made for the 2021 exhibition “Scrape & Scratch” at Culture Object.
Photo: Courtesy of Culture Object
Next Post