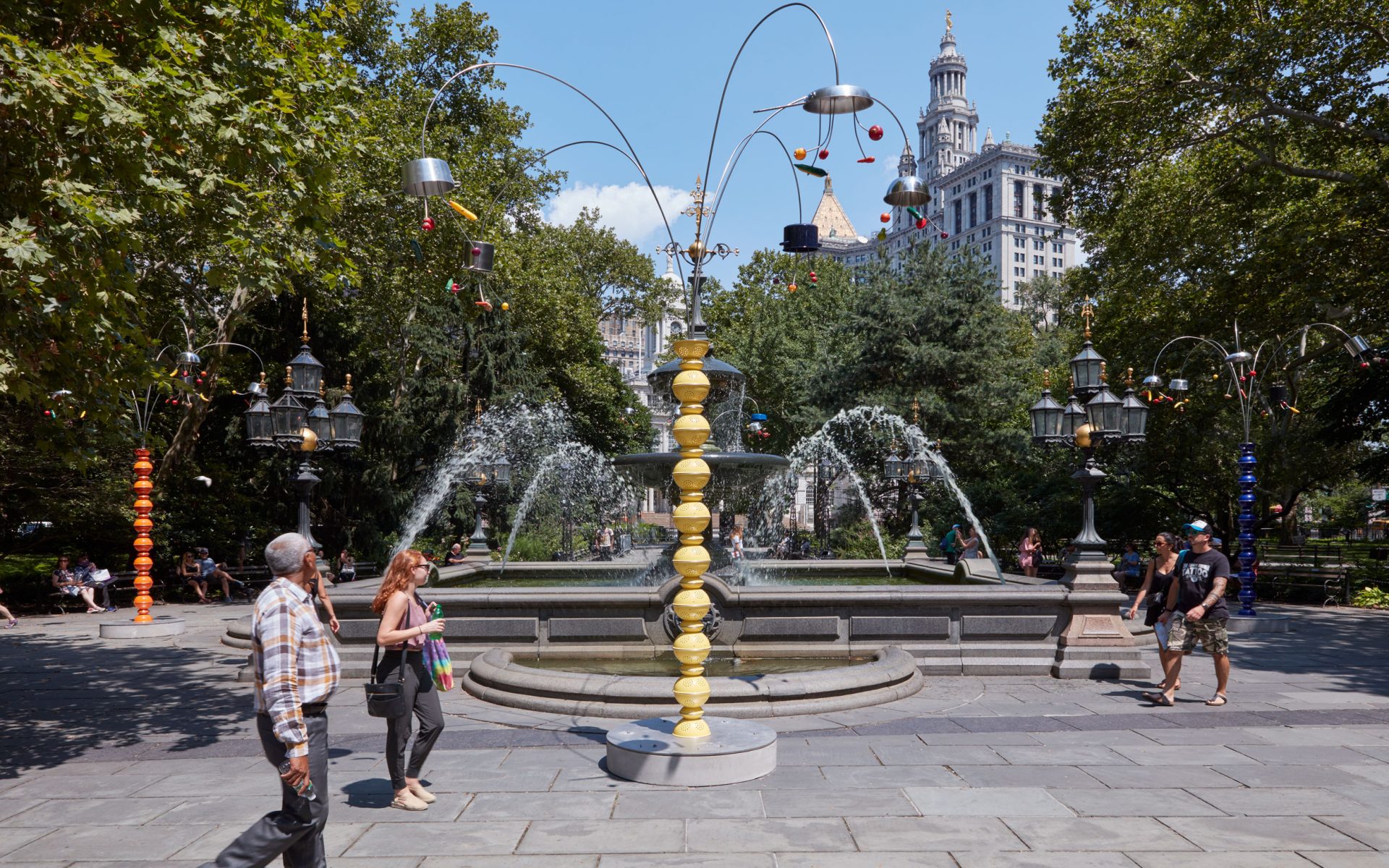 How Artist B. Wurtz Found His Groove with This Playful Public Commission

'Kitchen Trees,' a commission by the Public Art Fund, is the artist's first foray into public art in his nearly-50-year career

Since the early 1980s, when his career was still forming, the artist B. Wurtz has been known for his delicate, often small-scale sculpture and assemblage made from everyday objects like wire, ribbon, plastic bags, and yogurt containers, objects that offer a meditation on the basic human needs of food, clothing, and shelter. So when his new exhibition “Kitchen Trees” opened recently in City Hall Park, a commission by the Public Art Fund, of several towering works with heavy concrete bases surrounding the central fountain (and at one of the park’s entrances), it seemed like something of an anomaly. The works are composed of columns of stacked colorful colanders, with a few sprigs of thin wire jutting out exuberantly from the top. At the end of each wire is an upturned pot, and from each pot there spouts a few more smaller wires with plastic fruit or vegetable dangling at the end. The feeling is both whimsical and thoughtful. If you look at the sculpture surrounding the fountain, your eye moves up along the colanders, to the wires and the fruit, then up to the vigorous sprays of water, the trees that surround it, and the bronze sculpture and relief of the Municipal Building. During our visit on the opening day, the sculpture was met with a surprising amount of reaction. Whether smiling or bearing expressions of awe or looks of confusion, most visitors seemed engaged.

The show also marks the first time in Wurtz’s 50-year career that he has done a public commission. “I’m so not an outdoor-sculpture person,” he asserts. Maybe not, but these works seem to argue otherwise. We met up with the artist on the day of the unveiling to find out more about what went into his decision to finally delve into the public realm. B. Wurtz, “Kitchen Trees,” 2018, with the Municipal Building in the background. Photo: Jason Wyche, Courtesy of Public Art Fund, NY

Galerie: This is your first public installation. Why now and how did this project come about?

B. Wurtz: I had known Dan Palmer [Daniel S. Palmer, associate curator of the Public Art Fund] for a while, a few years. He invited me to do a project for the Public Art Fund benefit evening. He said, “Kind of think of it like a carnival.” So we came up this pistachio toss, where people threw pistachios into cups. And I made little prizes that were the same colors as the cups. So I really had fun doing that. I remember thinking, It’s so ironic that I get to do something for Public Art Fund, because I’m so not an outdoor-sculpture person. It’s just out of my normal comfort zone. That same evening Dan asked me if I wanted to submit a proposal for a project. What a wonderful thing to be asked and challenged to do something different than what I normally do.

Is it a scale issue?

Partly scale, yeah, I think that’s a lot of it. I do make some things fairly large, but nothing on this scale and nothing outdoors. You don’t just make something and stick it outside. It’s a whole different thing—you’re working with a group.

Was there one thing about it that felt the most daunting?

The most daunting was to get the works to not look overproduced. And that was what I tried to figure out with the fabricators I worked with—how to do this in a low-tech way. That was one of my first concerns. Fabricators? But you’re working with a lot of found objects, no? Isn’t that the essence of your work?

Yes, but I couldn’t assemble that gigantic thing. Those [wires at the top] are like my little wire sculptures, but you have to bend those on a big machine with levers.

Does that feel like a bastardization of your philosophy?

Well, it was an interesting challenge—to make it not be. I thought, Okay, there’s going to be a real challenge to think of something that’s my work, that I really feel is me that can also work outdoors in public on a big scale. My first thought was a lot of my things are made out of ordinary objects, the “food, clothing, shelter” themes. I thought, What’s waterproof [laughs], and then I thought of pots and pans. There are some things I can show you right here. For example, this plate here is bolted to the cement and you see the bolts. It’s not hidden—the mechanics. Then we talked about powder-coating the colanders. But we didn’t. These come in these colors. I really wanted to keep the objects exactly as I found them.

How was this process different from the way you normally work?

It’s been a real collaboration. I don’t normally work that way. I work by myself. I don’t have any assistants. I just hand-make stuff myself.

There are a lot more artists these days working with assemblage and found material than there were when you were first coming into your own as an artist in New York in the early 1980s. How has that change of context affected your work or the reception of it?

Nowadays there’s a whole interesting thing with the environment. Some of this found stuff has gathered other subject matter over the years. I feel that the environment is not the subject of my work, but it’s part of it, it can’t help but be. I’m personally a kind of militant environmentalist with protesting and writing letters and all that stuff. And I’m interested in recycling. And if I put a plastic bag in a sculpture hopefully it’s not going to end up in the ocean. But I accept the world I’m in. I’m not trying to judge it as some fantasy of what it should be but is not. I kind of have a real love for these ordinary objects. In the early 1980s, the art world wasn’t necessarily concerned with the type of work you were doing. It was more focused on the neo-Expressionists and the Pictures Generation artists.

I wasn’t the flavor of the moment, for sure. I did always have people that I really respected supporting my work. But I didn’t quite fit into what was the hip thing. So I was ignored a lot. But I started noticing some years ago, that young people, young artists, started being interested in my work. And I thought, That seems like a really good sign. And I think they were showing that things come around. Somehow the work I did became of interest to people. And I never wanted to do anything but what I was interested in. It’s a big mistake as an artist to try and fit into what someone is going to like, so I consider myself lucky that people started to get interested in what I was doing. I’m a classic late bloomer [laughs].

Have this many people ever seen your work in a day?

It’s incredible. It’s pretty thrilling. It’s a little surreal. And I have an interesting relationship with public sculpture. A lot of it I don’t care for. And think, Well, shouldn’t they have planted a tree there? But when people do it right, there’s something so fantastic about it. The curator said, part of it is that people see clearly what it is, they don’t have to read a wall text and try to connect it but they can’t and then start to feel intimidated. There’s something kind of great about reaching this large an audience.

The Public Art Fund regularly works with a variety of locations around the city. How did you settle on this location for the work?

I love that fountain. I think I had an obsession with fountains as a child, and I think that’s why a lot of my sculptures kind of mimic the spray of water. I think of my sculptures as a little wacky, a little Dr. Seuss-ish. But then I was looking at the fountain thinking, That fountain’s not so sedate. That’s a pretty exuberant, creative thing. So it was the perfect location. It’s an intimate, really wonderful park.