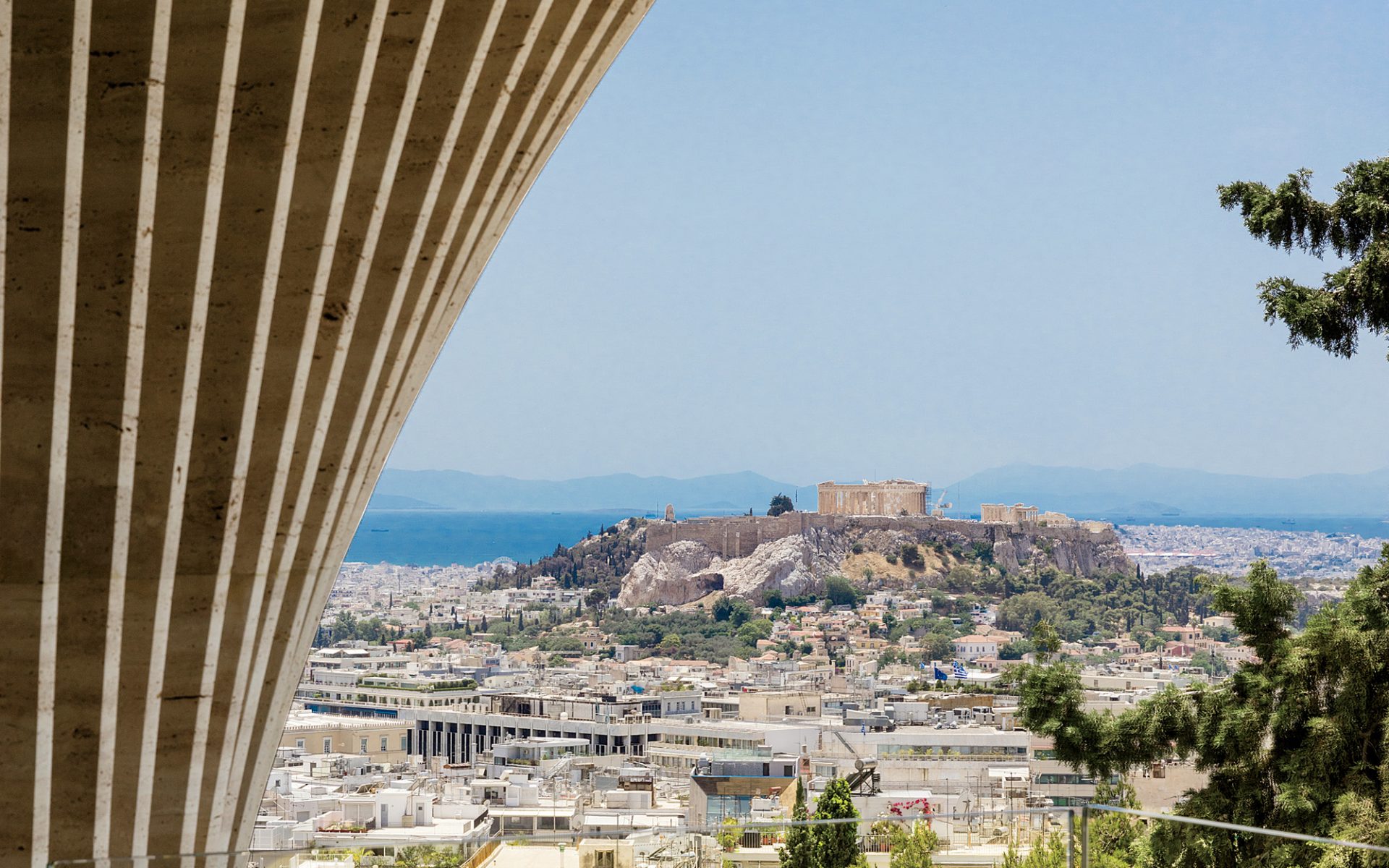 Athens’ famed Acropolis—the prime view of which is a quintessential value in the city’s real estate—takes center stage at One Kleomenous, a new residence from Omniview.

I believe that an architect’s biggest responsibility is to create buildings that blend harmoniously into their surroundings. If the environment is a natural wooded setting, the building should not violate the innate beauty of the site with hard forms or introduce artificial materials that are not appropriate to the leafy landscape. But when the landscape is urban, out of respect for the aesthetic already established in the neighborhood, the building should acknowledge the inherent modernity of contemporary materials and forms. So what happens when a mansion is constructed on the actual threshold between the built and the unbuilt? When the land it sits on is that marginal territory that exists on the edge of a densely built urban panorama and that of a completely natural environment?

The answer is simple, but the task it generates is far more complex. The building must harmonize with both aesthetics. It must be contemporary enough to qualify as a structure in the city, but maybe more important, it must blend harmoniously with the adjacent natural landscape. A sculptural Veria marble fireplace rises up seamlessly from the top floor of the dwelling, while floor-to-ceiling glass pocket doors leave the space completely open to the infinity pool and the panoramic city views.

Such is the case with Athens’ One Kleomenous—the first official project completed by the recently formed Athens-based company Omniview. The building is an imposing residence in the heart of the city, with 11 floors—six above, and five below, ground level. Both the clients—a young couple with three children—and the architect shared a love for Mount Lycabettus, a limestone hill, which, at 900 feet, offers an incomparable view of the sprawling city that stretches out below it, with the Acropolis at its center. The building is situated between the wooded Lycabettus Hill and Athens’ typical pale stone structures. Deep balconies have been built on nearly every floor so as to extend the interior spaces.

On the city side of the plot, the existence of a tall building led us to continue its form with a solid vertical plane, made of simple stucco, one of Athens’ most popular building materials. We very carefully studied the siting of the building, its orientation, and its functions, to develop a strategy for the facade—one of its most important design elements. The marble facade itself may be one of the most ambitious structures ever created in the cad/cam architecture computer program for design and manufacturing. On the side of the plot that faced the wooded hill, we geometrically manipulated the hard volumes of cantilevered balconies that were almost touched by the trees and plants, so as to adapt them to the fluid forms of the nearby land. Also, the southeast side of the building needed to be clad with a system that would filter the direct sunlight and ensure the energy-efficient operation of the house. The master bedroom has been furnished with a bed set in a swooping wood base. The adjoining bathroom—with its organically shaped tub and burl walnut-veneer cabinetry—is completely open to the rest of the space. The work of art on the wall is by the Greek artist Yannis Gaitis.

Researching the Lycabettus area, an old topographic map of the hill grabbed our attention—and the intrinsic nature of the map’s contour lines became the source of the architectural imagery. We digitally created a sweeping facade by making flowing transition volumes bridging the more solid shapes of the balconies. We then divided the facade into multiple sections, without adding extra volume to the building, but instead tried to unify the disparate elements into a geometrically pleasing whole. The choice of travertine marble was very rational, as we needed a material that matched the color of the characteristic beige stone of the Lycabettus’ retaining walls yet a natural feeling, due to its porous quality. The choice of palette of all the materials was meant to refer to the landscape of Attica—with its colors of earth, stone, and sky.

The combination of our design language and the materials we chose gave us the result we wanted—an unusual structure that references both the city it stands above and the wooded site it sidles up against. One Kleomenous harmonizes its surroundings, as well as asserts its strong and unique personality. A marble table snakes in front of a long sofa upholstered in dark taupe leather. As in the top floor pool room, the seating faces a wall of pocket doors that open the space to a balcony and the view of the Acropolis.

As told to Suzanne Slesin

Cover: Athens’ famed Acropolis—the prime view of which is a quintessential value in the city’s real estate—takes center stage at One Kleomenous, a new residence from Omniview.
Next Post