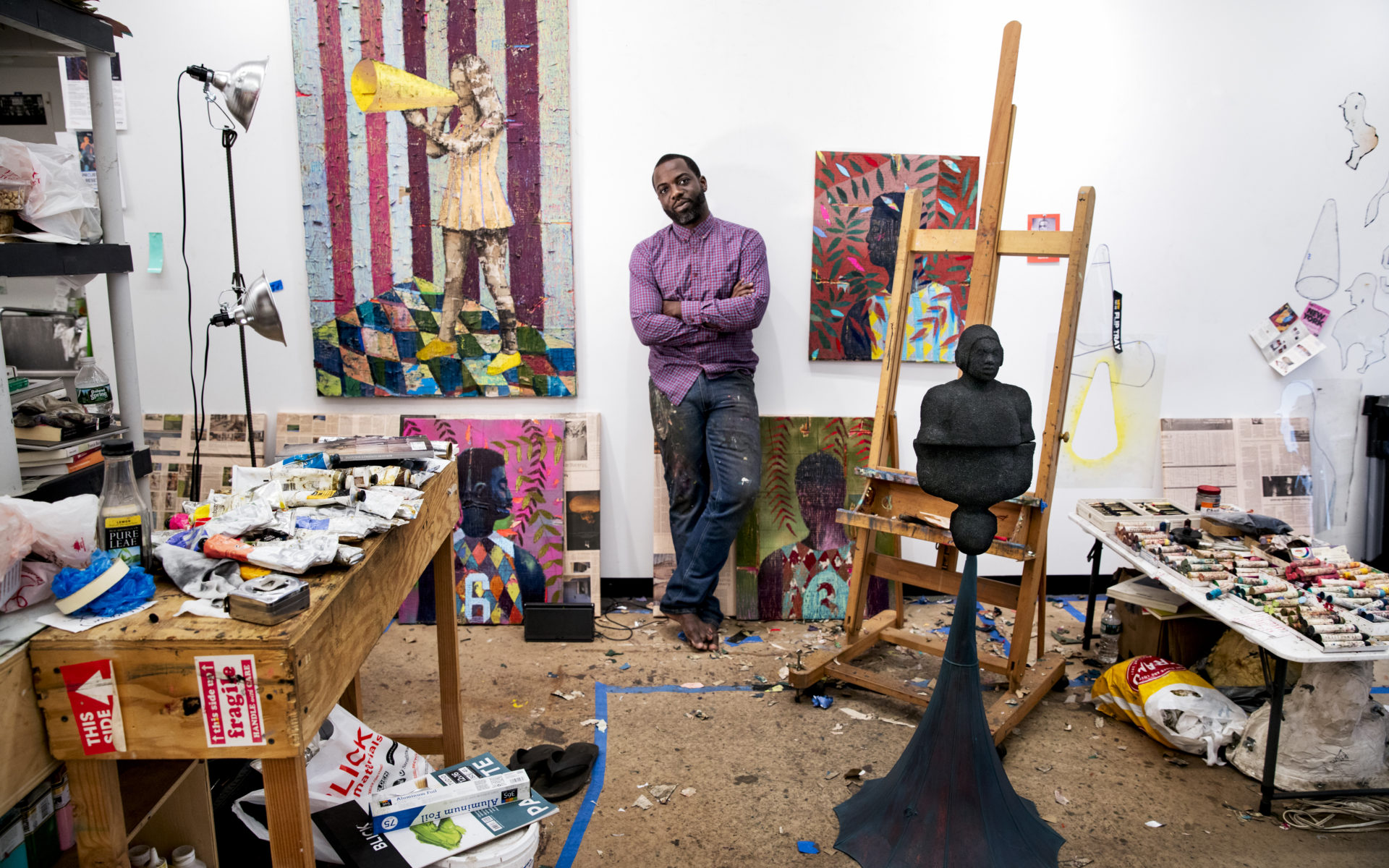 This summer, the celebrated Memphis-based artist Derek Fordjour takes viewers on an immersive trip down memory lane at the David Adjaye-designed Sugar Hill Children’s Museum of Art & Storytelling, a Harlem art space dedicated to nurturing creativity and curiosity in children.

Jumping effortlessly between mediums—sculpture, video, painting, and collage—the show, entitled “PARADE: Derek Fordjour,” reveals his unique and powerful approach to storytelling. Spending the last year as an artist in residence at the museum, Fordjour tapped into how children might engage with art, also drawing on his experience as a former arts educator (he has a Master’s Degree in Art Education from Harvard University). “The essence of art is infusing magic into an inanimate thing. A drawing, a painting—it’s about trying to imbue that moment with something more,” explains Fordjour. “And that’s the heart of play for children, they’re taking things and giving them life.” One of the striking displays at the Sugar Hill Childen’s Museum in Harlem. Photo: Michael Palma Mir

The multi-media installation, which runs through January 14, 2018, does just that. The journey begins with a lit-up tunnel that visitors are encouraged to enter. The inspiration was the 1978 movie The Wiz from his childhood—and remains a fascination for the artist. Next is a walkway filled with sculptures and motifs pulled directly from Fordjour’s childhood, along with more universal themes of culture and place. Referencing his bicultural experience growing up, living in Memphis, Tennessee, with Ghanaian parents, we find a Ferris wheel, a quintessential symbol of American leisure, adorned with African masks. Fordjour recalls being blown away by the ride, “It’s a Small World” ride at Disneyland as a child, and how an entire world was created from complete artifice. With a makeshift amusement park vibe, most of the three-dimensional objects, the sculptures and installations, are crafted from everyday household objects—cardboard, newspaper, aluminum foil. “It’s a poor man’s version of the ride. I wanted you to be able to go home and recreate this magic.” The elements are colorful, fun, and vibrant, but there are messages to be read too. A juggling machine, for example, speaks to the importance of perseverance. Fordjour shares how he had trouble juggling more than two balls. “It might sound silly but the determination to stick with something is critical to the life of an artist. The lessons I learned from my attempts at juggling taught me a lot.”

All these fragmented memories unravel in his parade. But unlike a typical parade where you stand still and watch everything go by, here you’re taken on the ride too. “A friend’s psychologist told her to let her thoughts unfurl and watch them pass by like a parade. To think about moments in the processional way you go through your past. I thought those evocations were perfect.”

Cover: Derek Fordjour in the studio.
Photo: TalismanPHOTO
Next Post