An installation by Paul Cocksedge at the Dior flagship in Paris.
Photo: Courtesy of Dior

While Paris is always a good idea, there is now yet another reason to visit this spring. Dior’s historic flagship at 30 Avenue Montaigne in Paris is set to reopen on Sunday after more than two years of renovation. So much more than a boutique, the space will feature a restaurant and cafe helmed by French chef Jean Imbert, exclusive suite for clients who wish to spend the evening in the historic building, a unique exhibition space to showcase contemporary art, the celebrated haute couture ateliers, which have called the building home ever since Dior inaugurated the space in December 1946, and even an alcove dedicated to beauty treatments. Designed by Peter Marino, the 108,000-square-foot building houses the French luxury brand’s largest boutique worldwide alongside La Galerie de Dior, the biggest permanent exhibition space dedicated to fashion in the hands of a private house. Eyecatching artworks abound, including this suspended installation, resembling falling paper leaves, by British artist Paul Cocksedge.—Lucy Rees 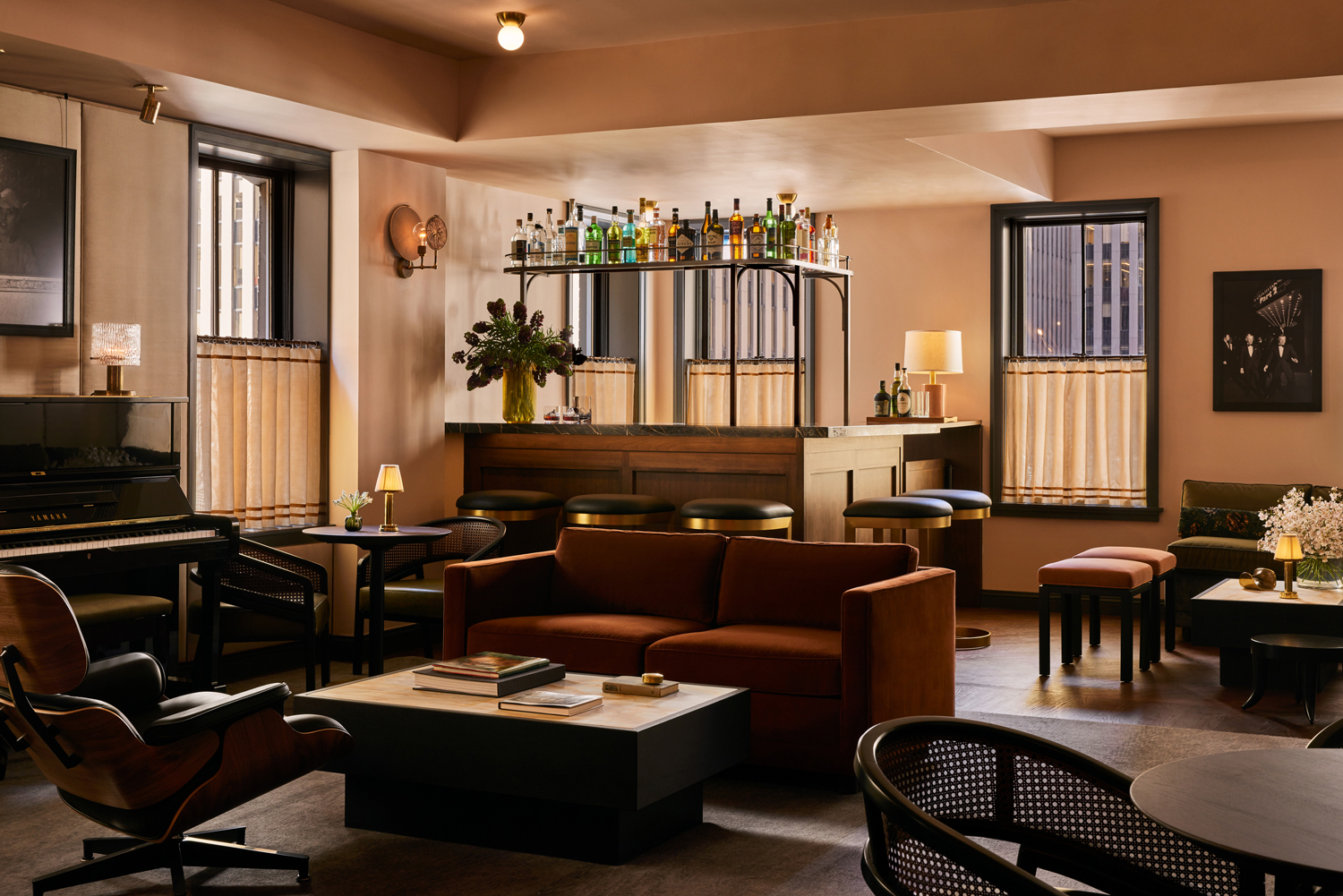 At Pebble Bar, the private event space on the fourth floor combines residential furnishings and a piano. Photo: Pebble Bar

Nestled between the gleaming skyscrapers lining the blocks of midtown Manhattan, there’s a townhouse that sits near Rockefeller Center and looks equal parts charms and anachronistic. A relic of days gone by this landmark is now home to the newly opened Pebble Bar. Unfolding over three stories, the bar and restaurant concept, designed by Gachot Studios, who were featured on Galerie’s Creative Minds list in 2021. “Impressively, this building has withstood lifetimes of midtown development,” says Christine Gachot, partners in the firm with her husband, John. “We wanted to honor that poetic presence by creating a glowing beacon that celebrated its own intimate scale,” They achieved exactly just that with a glass and brass backlit bar overlooking Sixth Avenue on the second floor and a 35-seat, dark blue dining room on the third. On the fourth floor, Johnny’s is a private event space with vintage rugs, custom furniture, and a piano that feels like the living room of a stylish, creative friend. “The vibe inside is residential: a warm and layered space that encourages you to get comfortable and stay a while,” she explains. “We referenced our favorite members’ clubs, such as Blacks in London.” Raw oysters, seafood towers, and steak tartare feel right at home on the menu in the clubby atmosphere. The cocktail list feels equally insider with offerings such as Hurley’s Old Fashioned, a nod to the bar that inhabited the space for over a century, and the Ginny Fallon, referencing the stars of NBC Studios—just a stone’s throw away. –Jacqueline Terrebonne 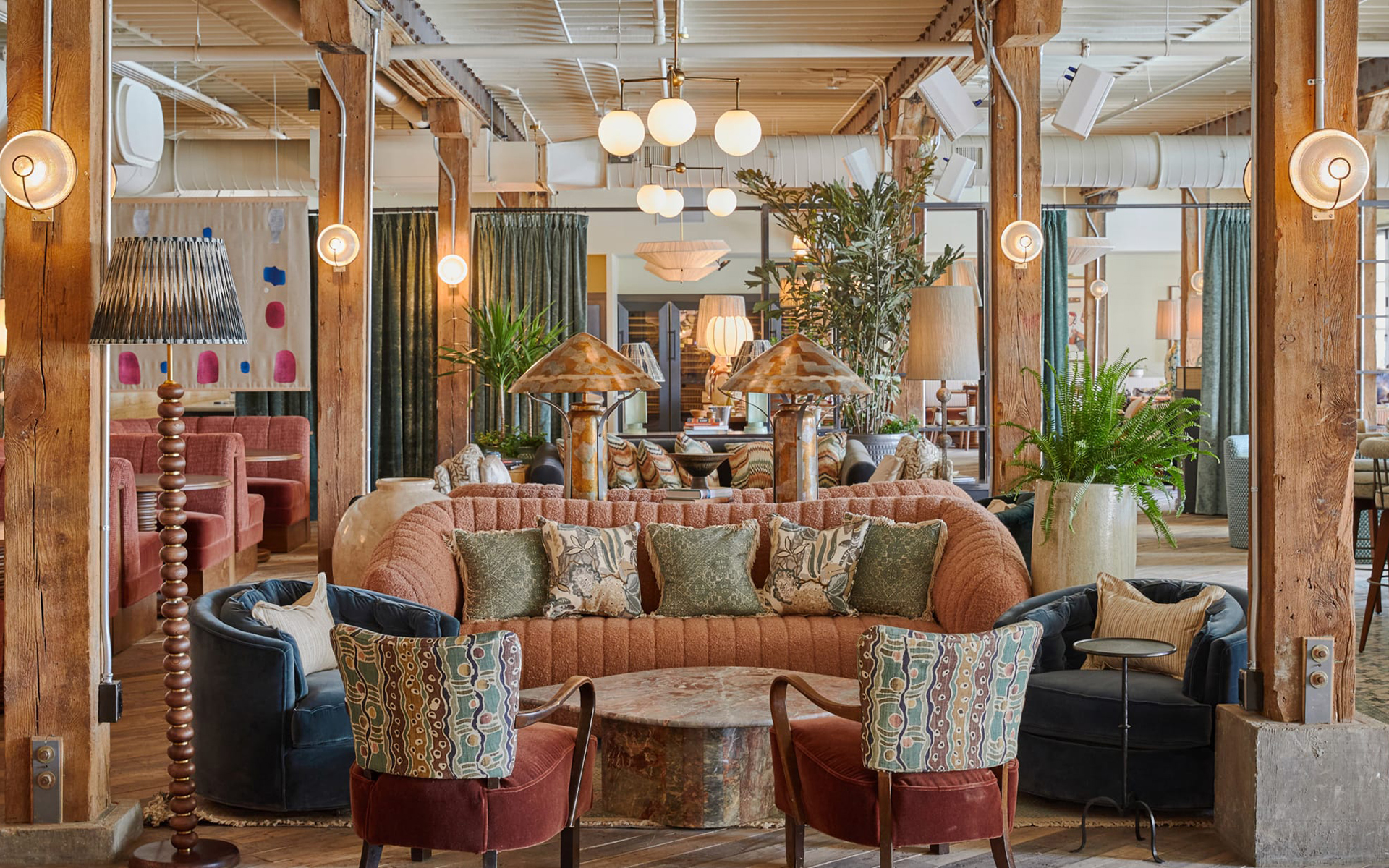 Soho House Nashville has opened in the May Hosiery Building. Photo: Soho house

In a majestic twist of fate, a century-old sock factory in Nashville has been reborn as the newest outpost of Soho House, the exclusive members club with ultra-chic locations in New York, London, Mumbai, and more than 30 other cities. Located in the hip Wedgewood-Houston neighborhood, the property spans more than 97,000 square feet, making it the brand’s largest in North America. Inside are 47 guest rooms for members of the club, as well as three performance spaces, a screening room, a pool, a health club, and a Cecconi’s restaurant. “The house design is influenced by a strong pre-war, European aesthetic, connecting to the building’s history with Bauhaus-inspired, striking geometric patterns, bold industrial finishes, and bespoke fixtures,” said the in-house design team.—Geoffrey Montes 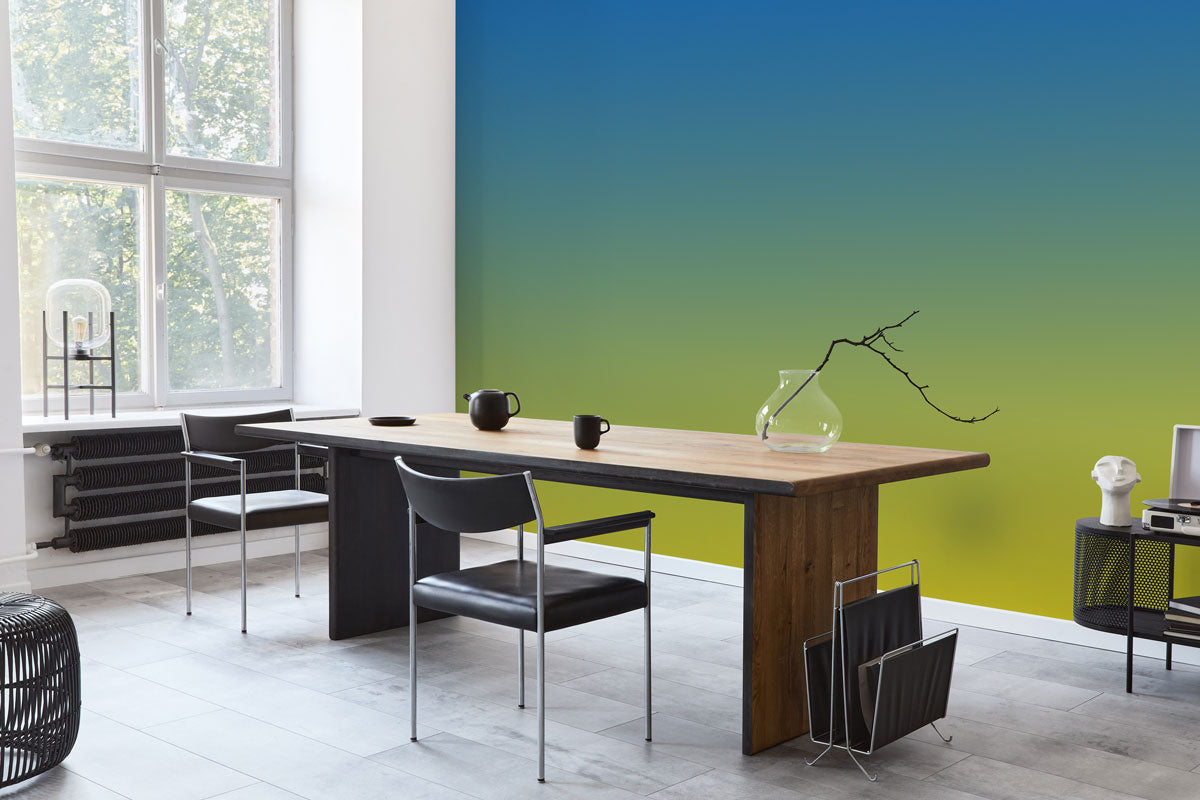 Their latest collection in collaboration with photographer Mike Vorrasi is a bold gradient reflecting the vibrant colors of the Ukrainian flag. Photo: courtesy of Wallpaper Projects

Brooklyn-based design studio Wallpaper Projects, founded by creative duo Amanda Dandeneau and David Jiménez, creates artful bespoke wallpaper and fabrics utilizing experimental processes and materials. Their latest collection in collaboration with photographer Mike Vorrasi is a bold gradient reflecting the vibrant colors of the Ukrainian flag. Proceeds of the limited-edition design (customizable in scale, fabrication, and finish) will be donated to José Andrés’s World Central Kitchen—who’s mission to provide meals in response to humanitarian, climate, and community crises has focused its efforts to Ukraine. WCK has already served thousands of meals to Ukrainian refugees and supported local restaurants in eight Ukrainian cities such as Lviv and Kyiv. —Stefanie Li 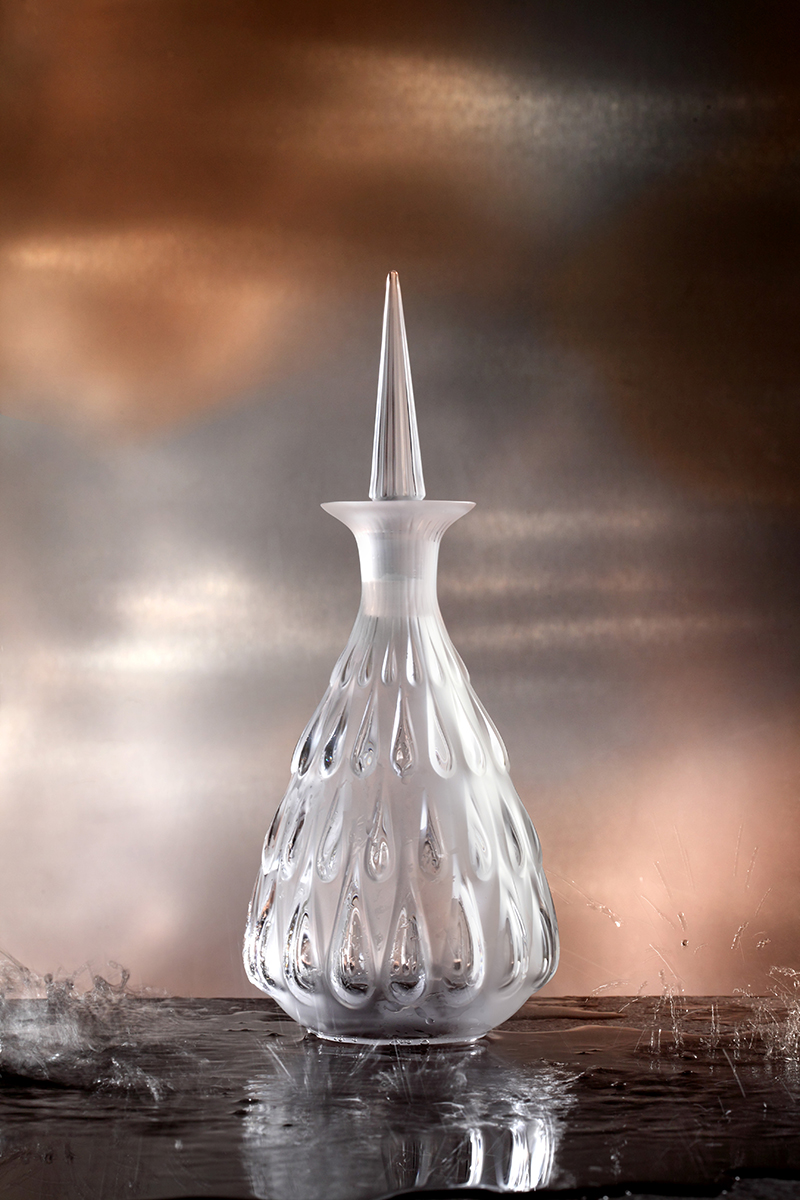 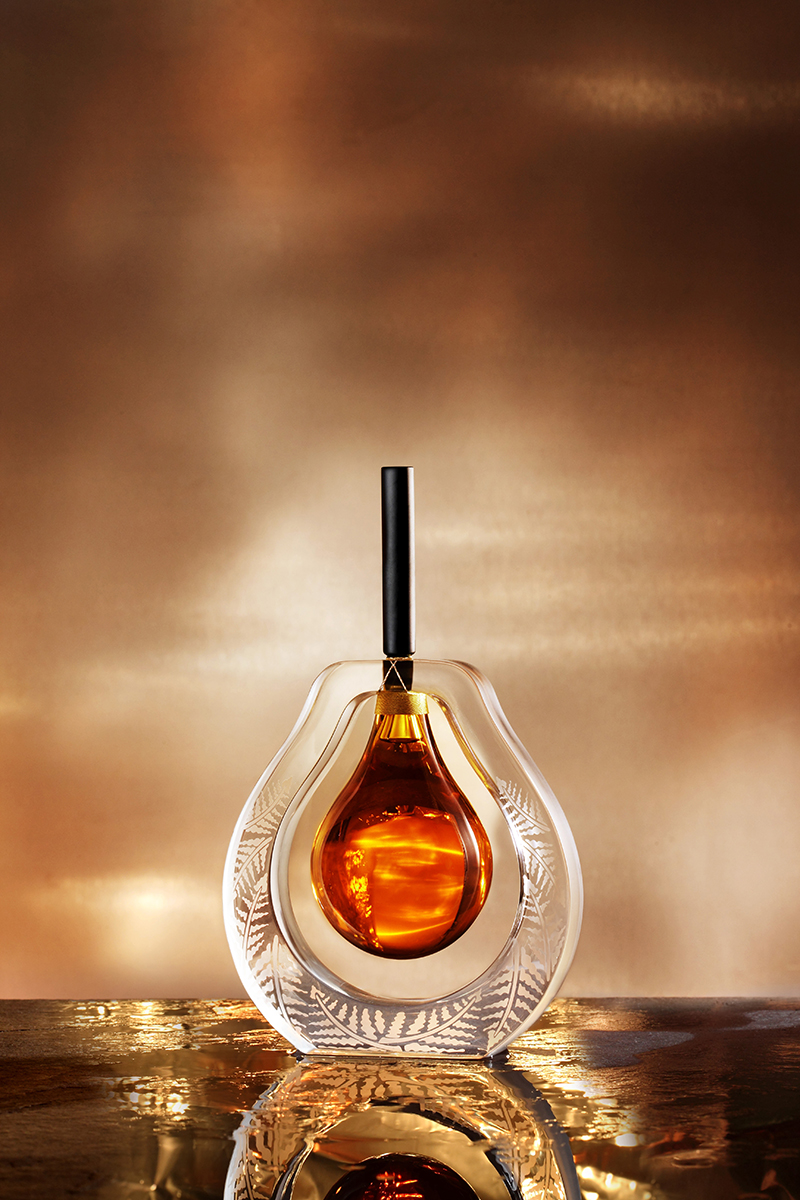 Starting in 1922, René Lalique created beautiful glassware from a picturesque village in the northeast corner of France called Wingen-sur-Moder. Now, to celebrate the 100-year anniversary of the Alsace factory, Lalique is introducing two remarkable collector-edition pieces in pure crystal that draw from the history of the maison. Limited to just 100 pieces, the satin-polished Water Drop decanter is inspired by a similar white-glass design first created in 1922. Even more exclusive is the Fusion flacon—just ten signed and numbered examples will be made of the decorative bottles that come filled with an original fragrance conjured by master perfumer Alexis Dadier that blends an array of decadent aromas including amber, pink peppercorn, white musk, and honeyed orange blossom.—Jill Sieracki 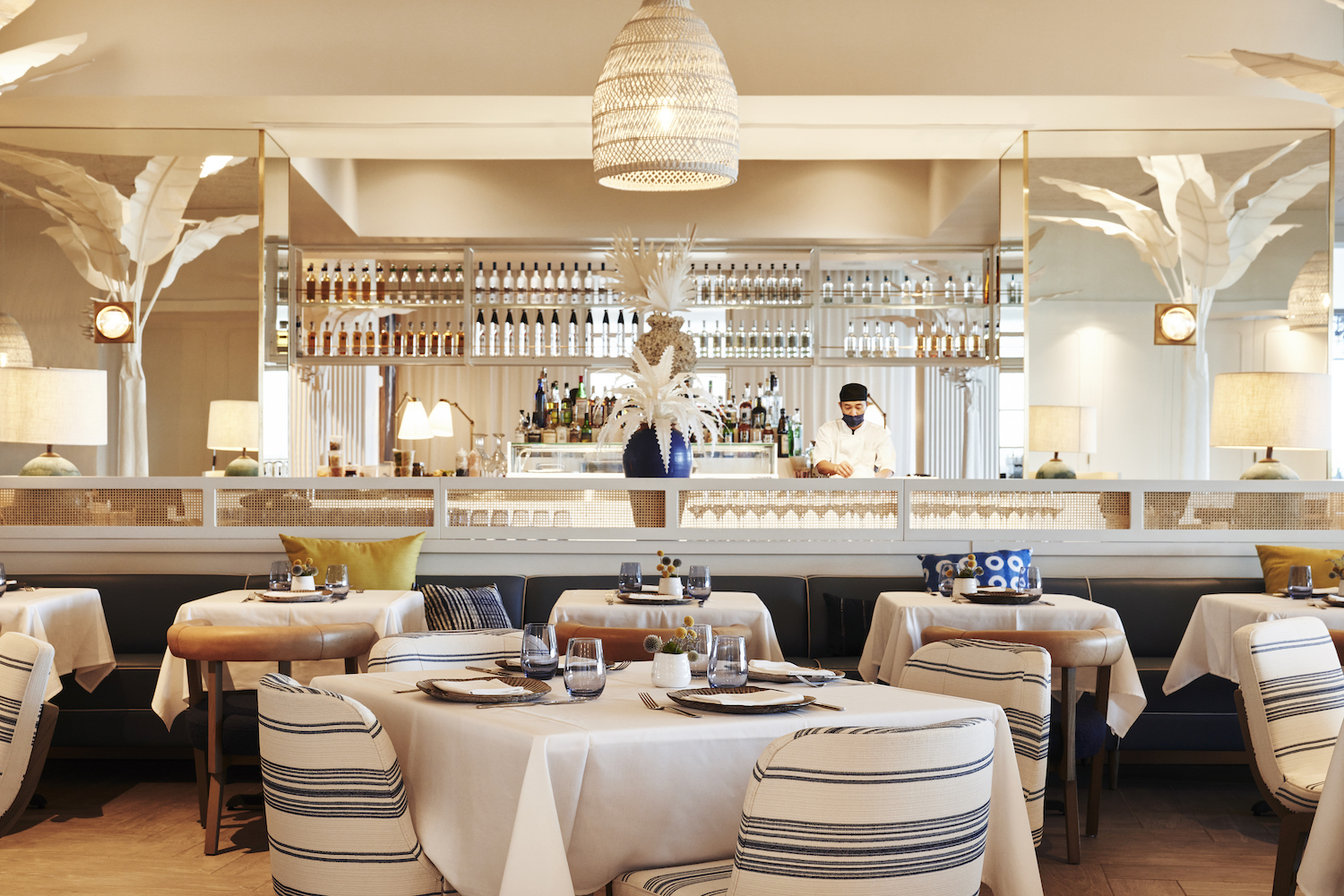 Former Ralph Lauren Home Chief Creative Officer Alfredo Paredes has officially reentered the hospitality world after launching his self-named studio in 2019. His latest project, Dune by Laurent Tourondel, is a five-star experience located in Fort Lauderdale, where he’s brought his sophisticated eye to Floridians and visitors looking for an elegant dining experience. Having designed for impressive spaces including the legendary Polo Bar in New York City as well as Ralph’s Restaurant in Paris, Paredes is adding yet another tick on his résumé. For Dune, Paredes decided to emphasize the restaurant’s picturesque beachfront property by incorporating neutral tones of mosaic tiles and white canvas palm tree sculptures throughout the entry hallway. Pops of blue from turquoise ceramic lamps, indigo washed furniture, as well as the restaurant’s outdoor bar made of aqua mosaic tiles bring some color both indoors and outdoors while woven pendant lights hang overhead. In addition to Paredes’s chic design style, the restaurant’s menu was conceptualized by acclaimed French chef Laurent Tourondel who has opened numerous other restaurants in New York, Miami, and Las Vegas. Now accepting reservations, this new Fort Lauderdale hotspot is a true example of two artists colliding. —Shelby Black

Cover: An installation by Paul Cocksedge at the Dior flagship in Paris.
Photo: Courtesy of Dior
Next Post