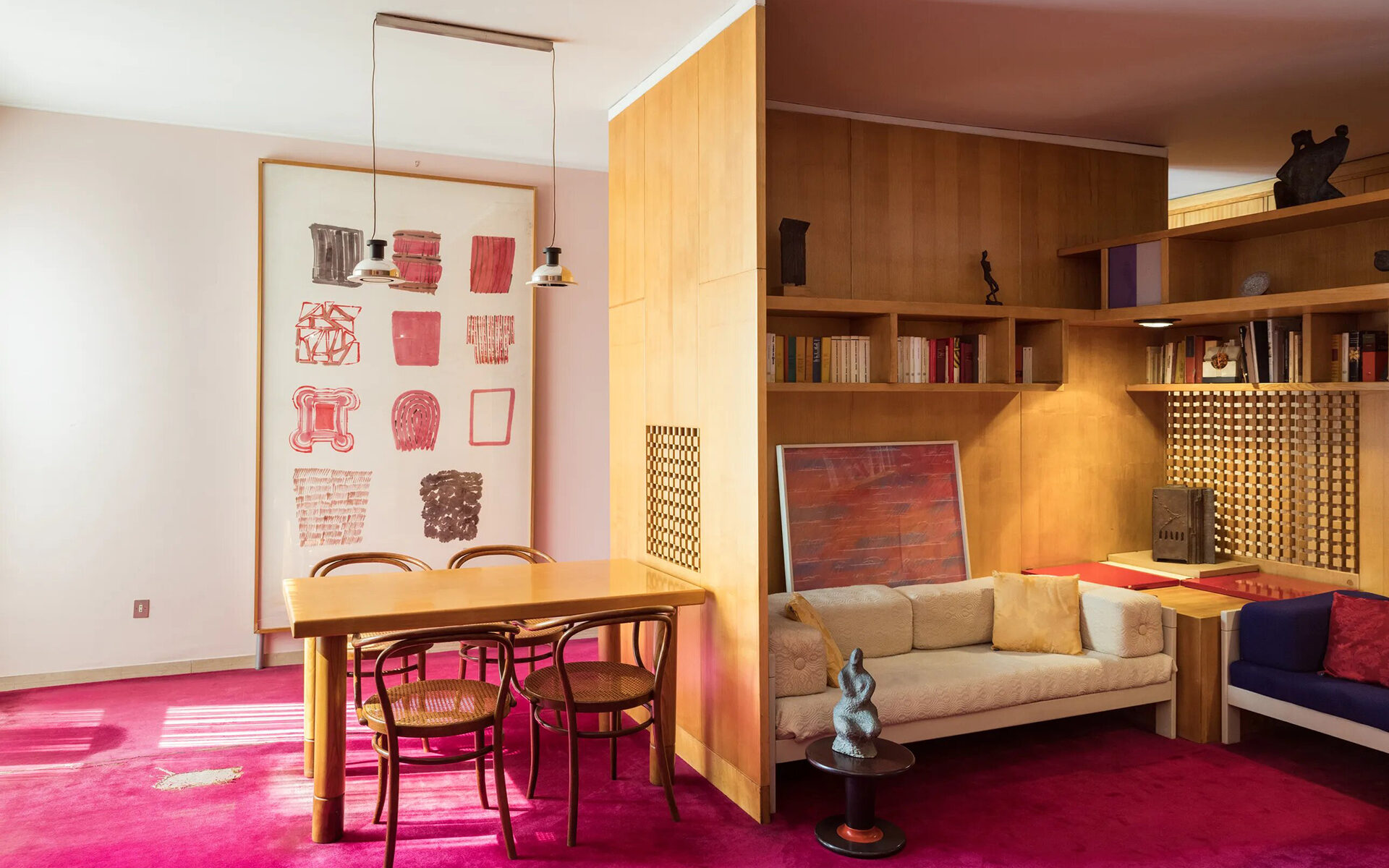 Permanently reproduced at Milan’s Triennale Design Museum, Ettore Sottsass’s Casa Lana is an apartment made up of ’rooms within a room’, and is now on view to the public.
Photo: Courtesy of Triennale di Milan 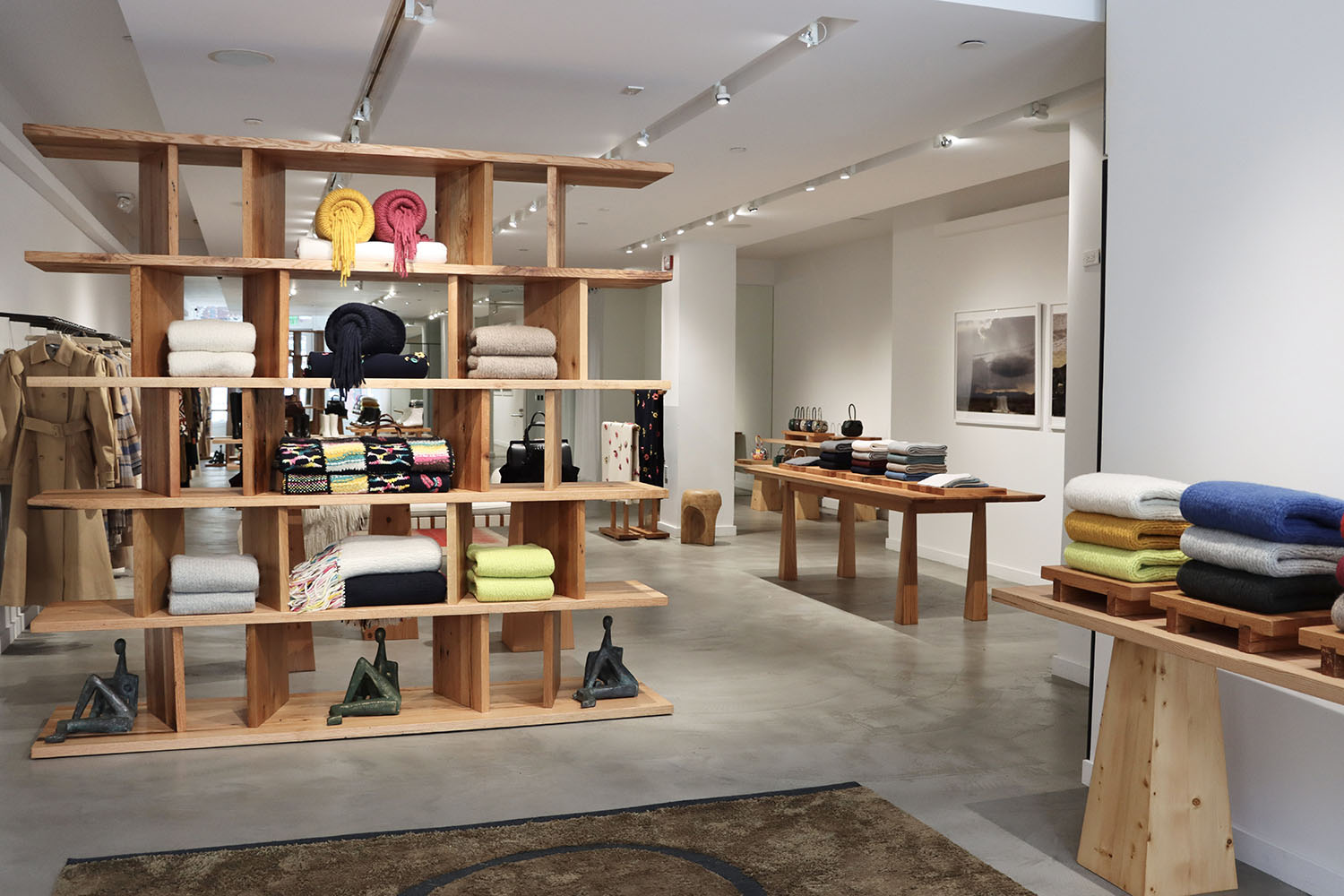 The shopping scene in Aspen is heating up this winter. Fashion designer Gabriela Hearst has launched a new pop-up at MAX, Max Martinez’s specialty retail store on Hopkins Avenue, through March 31. In line with her commitment to sustainable design, the space features custom furniture and fixtures designed in collaboration with French maker Antoine Dumas and woodworking artisan Benjamin Gavron. The consoles and hanging fixtures are made with reclaimed cedar and Douglas fir previously used to clad the outside of water towers in New York, while tables, shelves, and racks are crafted from recycled oak sourced from 19th and 20th century silk and textile mills in Pennsylvania. Inside, shoppers will find key items from the brand’s women’s and men’s collections, including ready to wear, handbags, footwear, accessories, fine jewelry, and home. A highlight is the gorgeous knitware offering, featuring hand-spun welfat cashmere pieces crafted in Uruguay by the nonprofit organization Manos del Uruguay. —Lucy Rees 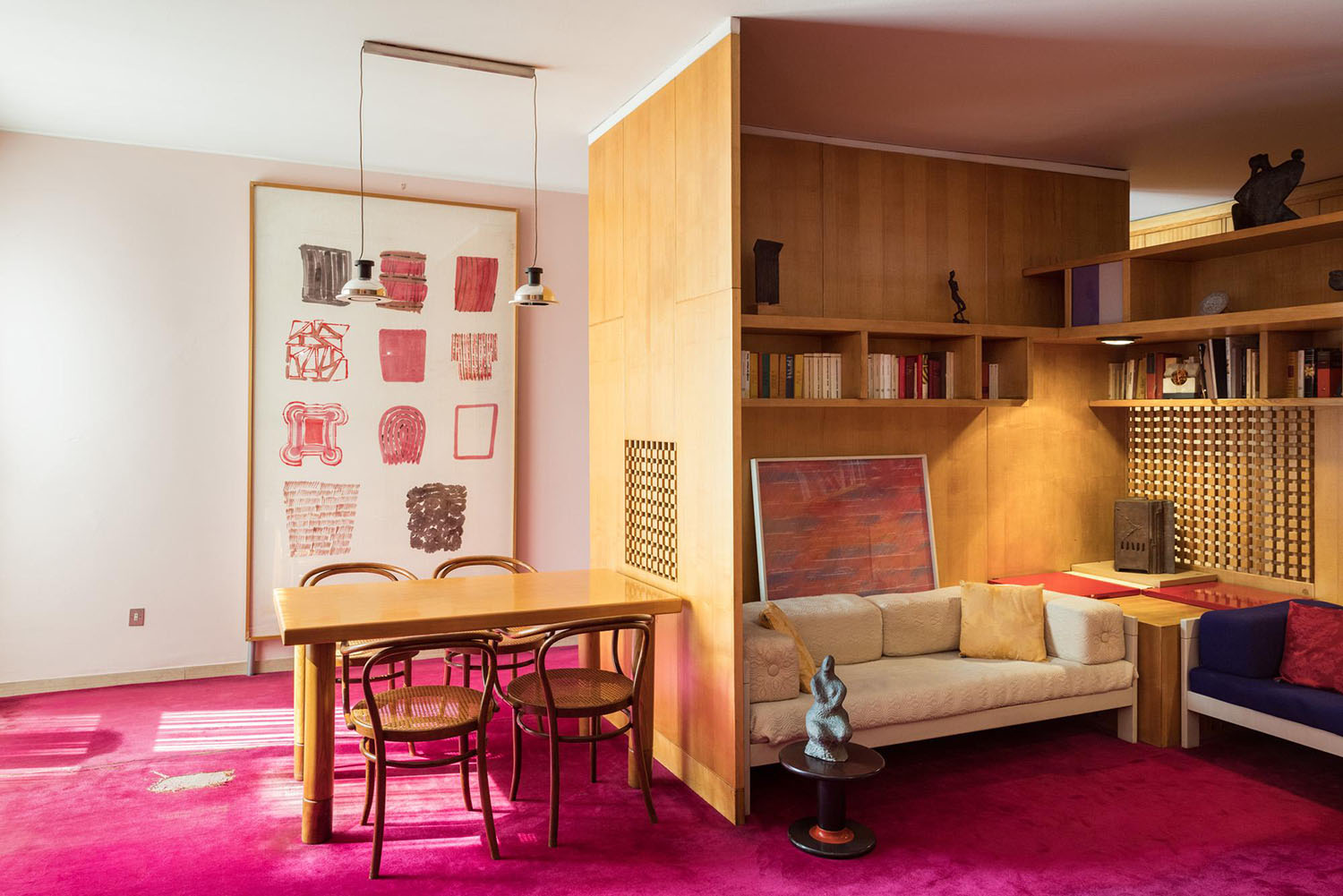 Permanently reproduced at Milan’s Triennale Design Museum, Ettore Sottsass’s Casa Lana is an apartment made up of ’rooms within a room’, and is now on view to the public. Photo: Courtesy of Triennale di Milan

Designed in 1965 by Ettore Sottsass for his friend, the lithographer and printer Giovanni Lana, Casa Lana in Milan has just been acquired for the permanent collection of the Triennale di Milano. After dismantling the home and using original pieces, the Triennale has now recreated one of the central rooms for the public to see. The meticulous reconstruction is thanks to lengthy study by the institution’s archive and restoration center. Chock full of clever design tricks, Casa Lana offers up innovative solutions for small-space living with a tight sequence of spaces, or ‘rooms within a room,’ dedicated to different functions. Also on view is “Ettore Sottsass. Struttura e Colore,” the first of a series of exhibitions exploring the Italian maestros’s contributions to the world of design, art and architecture —L.R. 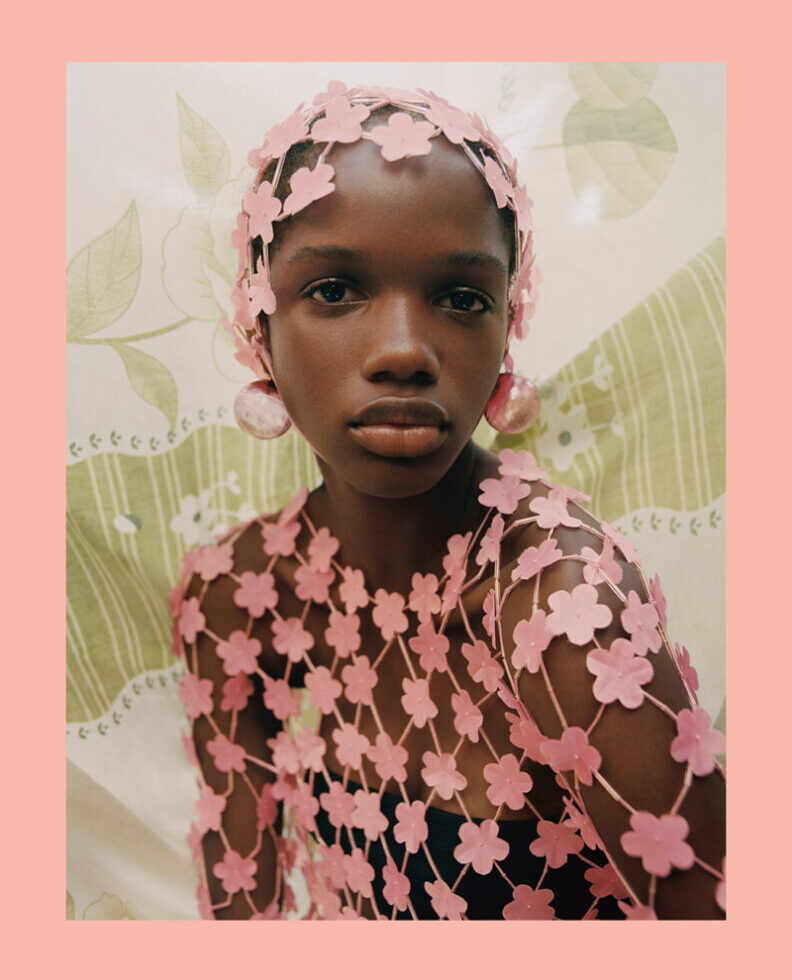 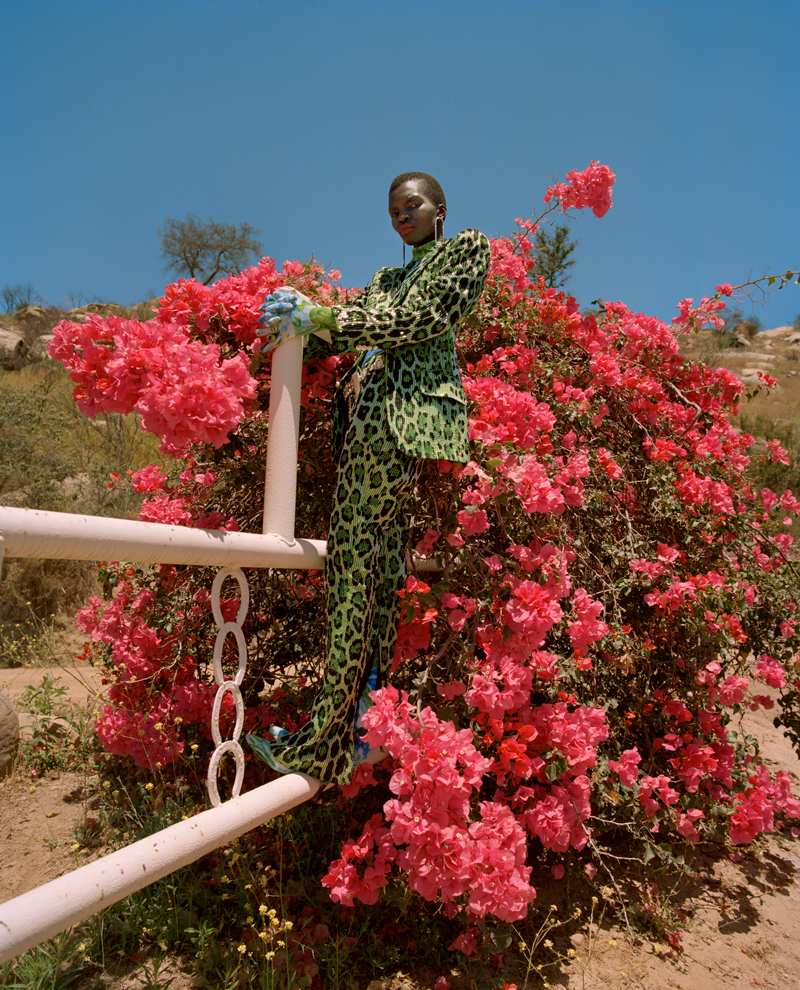 Achok Majak in “The Cowboy Who Fell To Earth” for Garage Magazine, September 2018 Photo: Nadine Ijewere

3. Nadine Ijewere: Our Own Selves (Prestel)

Filled with over 160 photographs, Nadine Ijewere: Our Own Selves (Prestel) traces the fruitful career of London-born fashion photographer Nadine Ijewere, the first Black woman to shoot the cover of Vogue in the magazine’s 125-year history. This debut monograph features photographs from personal series shot in Jamaica and Lagos to fashion shoots for Dior and Hermès. “This book is an insight to my journey thus far, it is a book about women,” she says. “My work has always had underlying themes of identity and diversity, celebrating our differences, reframing what beauty has stereotypically been and creating a space to elevate women of color.” Already released in the U.K., the beautiful tome will be available Stateside later this month. —Stefanie Li 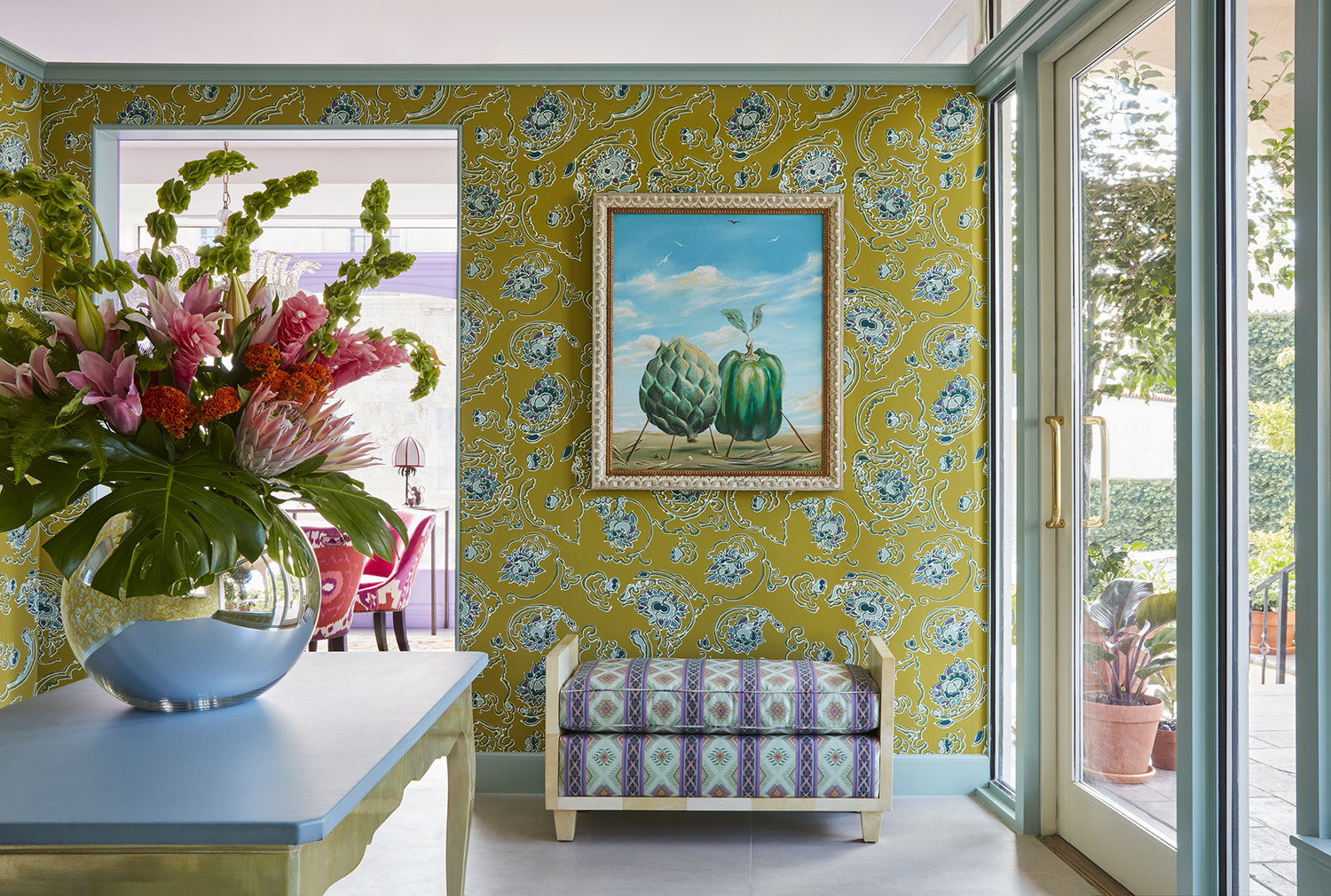 After hosting a glamorous farewell in his New York flagship at the end of 2021, jeweler Mish Tworkowski has opened his stylish Palm Beach headquarters in a historic Addison Mizner–designed, pink-stucco building once home to the city’s first department store. Crafted in collaboration with Katie Ridder, the boutique is swathed in color and pattern with exciting treasures—like a custom Nancy Lorenz artwork, a series of botanical prints once belonging to Brooke Astor, and a vintage pagoda discovered in an auction of philanthropist Carroll Petrie’s estate—displayed within. Of course, the jewels are the real draw with Why Knot?, Mish’s first new series in three years, debuting at the new location. Another introduction is the playful turquoise Cabana bracelet, which features shells and sea life charms carved by craftsmen in Naples, Italy; a portion of the sales will benefit the Preservation Foundation of Palm Beach.—Jill Sieracki 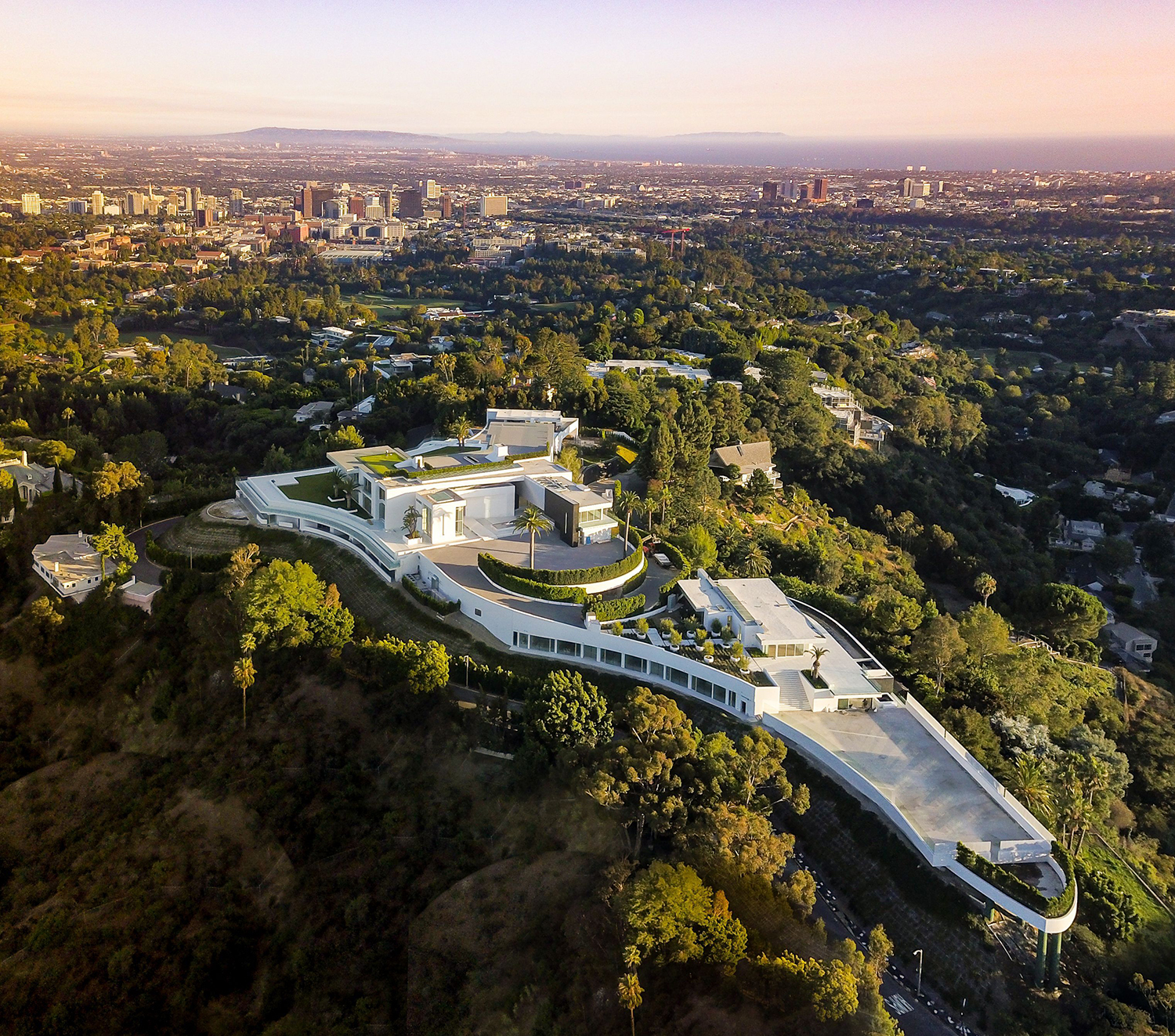 The One in Bel Air, California. Photo: MICHAEL LEONARD | THE SOCIETY GROUP

5. The Most Expensive Home in the U.S. Hits the Auction Block

Once valued at $500 million, this massive Los Angeles residence—dubbed The One by its developer, Nile Niami—is set to be listed with Concierge Auctions on January 7 for an eye-watering $295 million with no reserve. (Bidding will take place February 7–10.) Constructed over the course of eight years and never occupied, the 100,500-square-foot manse was masterminded by architect Paul McClean and interior designer Kathryn Rotondi. Of course, the nearly four-acre property comes with a bevy of unique amenities befitting its hefty price tag, among them a nightclub, two spas, a running track, 64-foot indoor pool, 30-car garage, and a 5,500-square-foot primary suite equipped with its own pool and hot tub.—Geoffrey Montes

Cover: Permanently reproduced at Milan’s Triennale Design Museum, Ettore Sottsass’s Casa Lana is an apartment made up of ’rooms within a room’, and is now on view to the public.
Photo: Courtesy of Triennale di Milan
Next Post