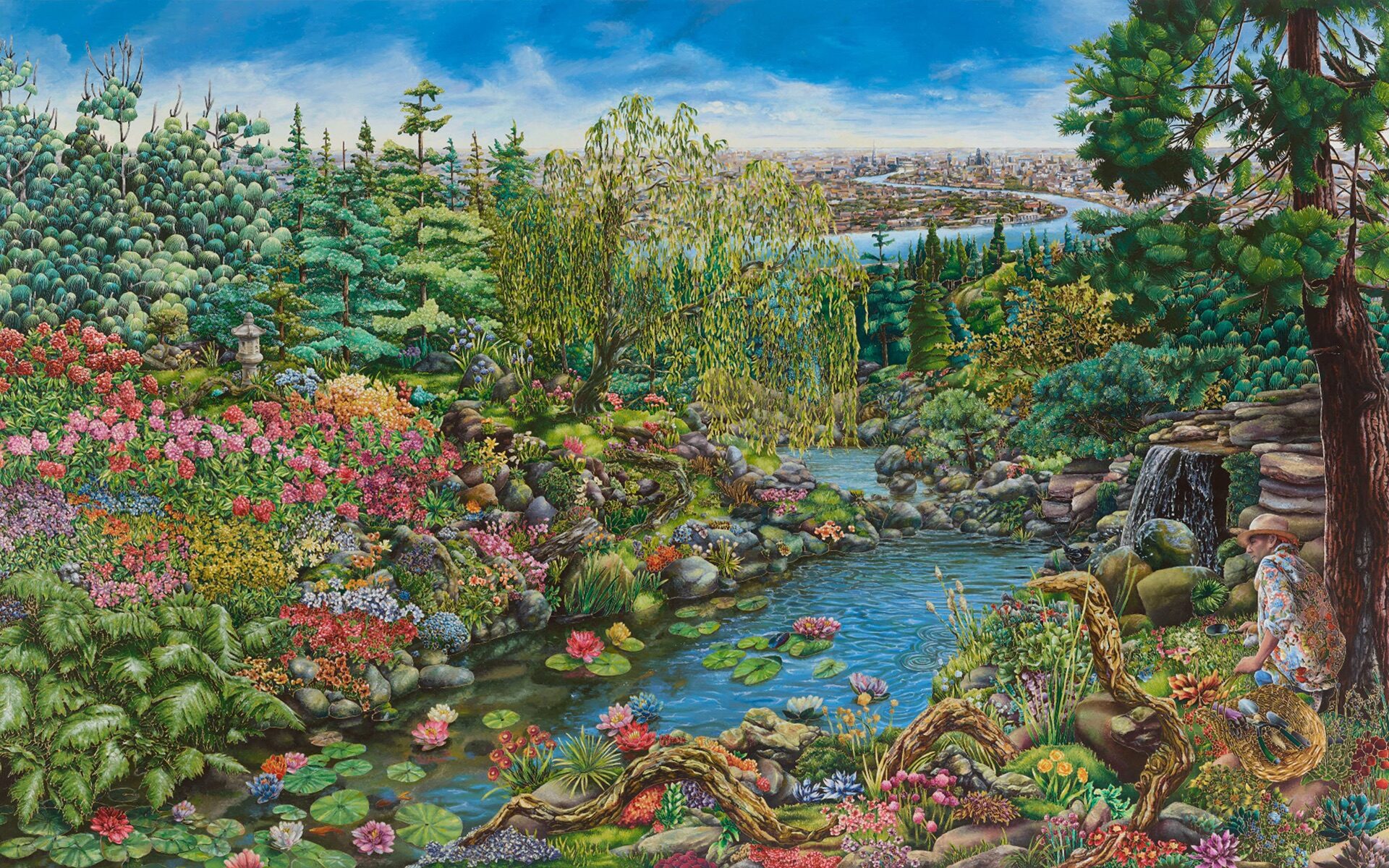 Raqib Shaw, A Summer of Sombre Stirrings.
Photo: Courtesy of the artist

From the sale of a super rare 15-carat blue diamond to Raqib Shaw’s installation at Dries Van Noten’s L.A. boutique 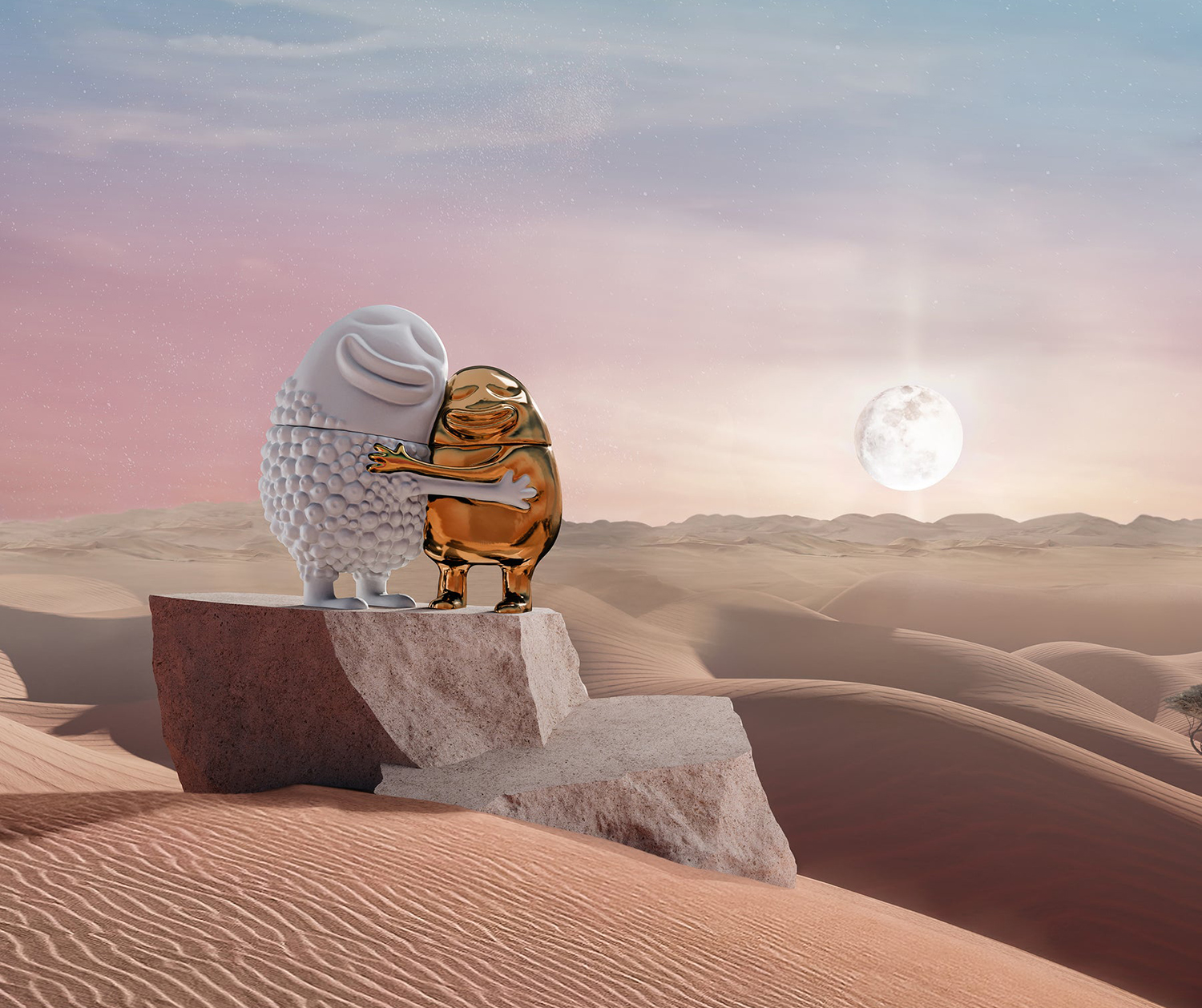 Design and fantasy are colliding once again with the unveiling of L’Objet’s second Haas Brothers collection, which features a stunning selection of “Mojave Matcha” embellished porcelain dinnerware as well as a new cast of captivating characters. A follow-up to 2019’s charming fleet of miniature monsters, the new collaboration includes a porcelain crocodile-shaped box glazed with 24K gold, brass and smoked-oak salt-and-pepper mills, and an incense burner resembling a meditating goddess. Perhaps most charming of all is the Huggers Box (above), which features a pair of oblong creatures sharing an embrace inspired, per L’Objet, “by rediscovering the joy of being with family and friends.” It’s a perfect ode to that moment we wish we could keep forever.—Geoffrey Montes 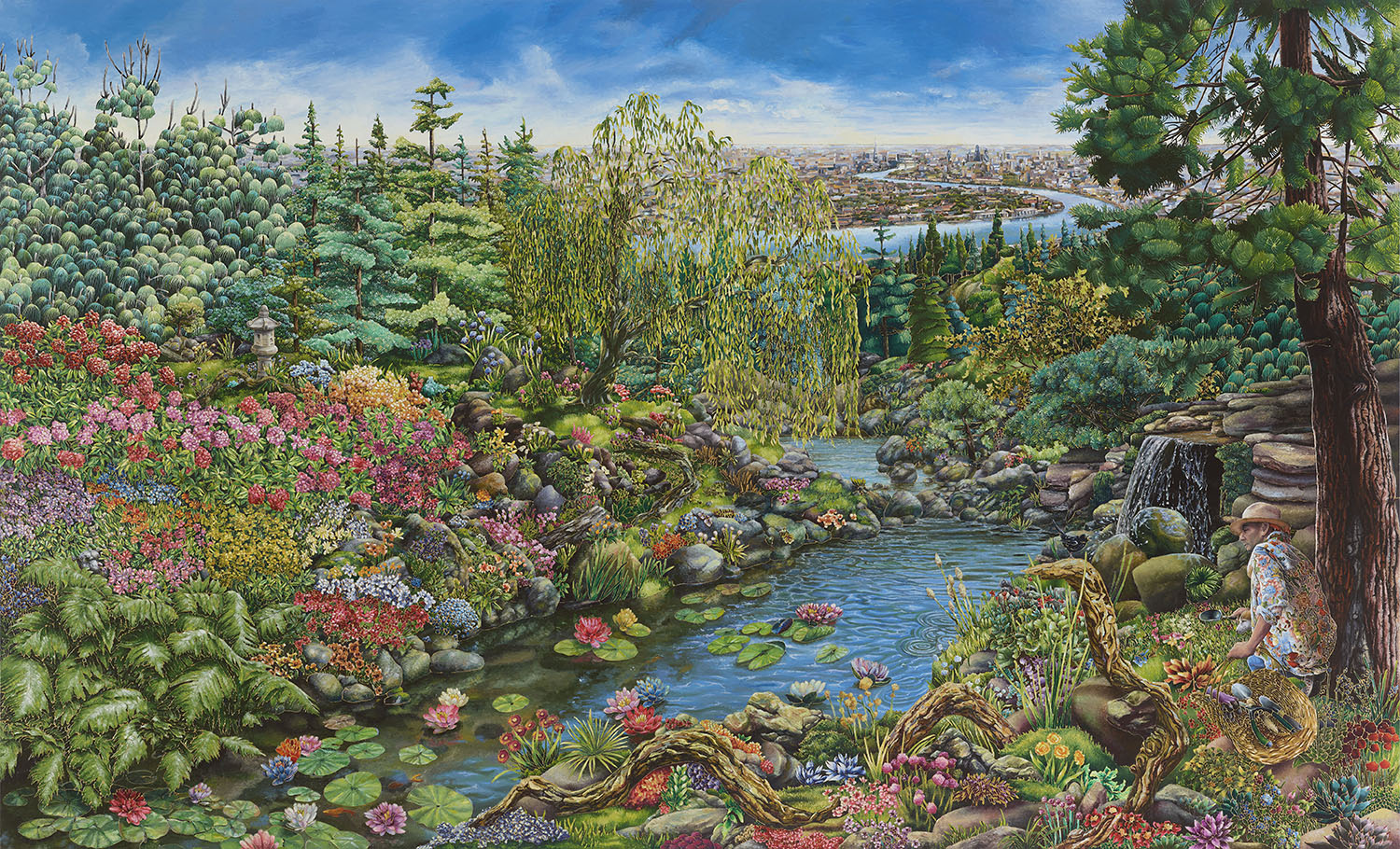 Raqib Shaw, A Summer of Sombre Stirrings. Photo: Courtesy of the artist

During Frieze Los Angeles, which took place last week, there were a multitude of artful moments popping up all over the city, making it was impossible to experience them all. One of the not-to-miss highlights was Raqib Shaw’s “Tales from an Urban Garden” at Dries Van Noten’s The Little House, a 1950s-era bungalow completely shrouded by ivy located on La Cienega Boulevard, used especially for the Belgian designer’s art exhibitions. It is an ambitious collaboration between the brand, the artist’s longstanding art dealer Jeffrey Deitch, and gallery White Cube. Inspired by his memory of his mother’s garden in Kashmir, Shaw transformed the parking lot of his London studio into a beautiful floral respite, “a world in miniature that could be magnified on canvas… a perfect theatre setting for my paintings where my life is re-enacted and recorded.” Through March, visitors will get an insight into that magical artistic world with a series of new garden-themed paintings on view at The Little House. Using a wide range of artistic and literary traditions, his art reflects his deep knowledge of the art of India, England, continental Europe, Persia, and Japan among other influences. —Lucy Rees 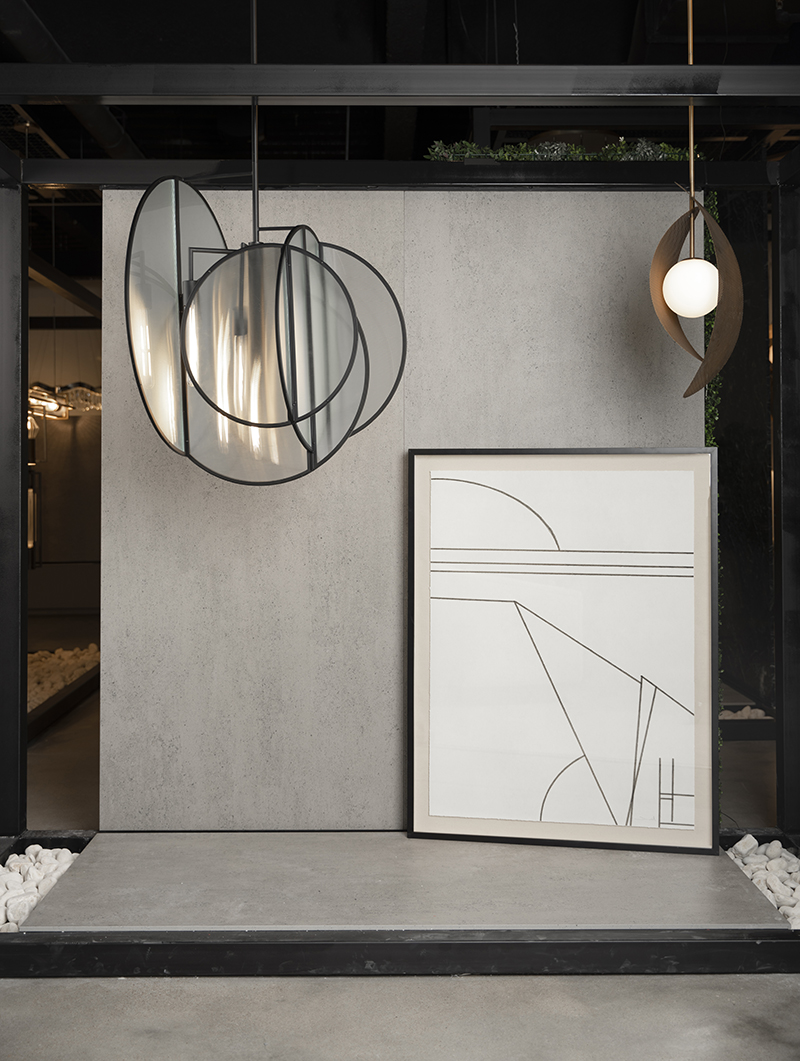 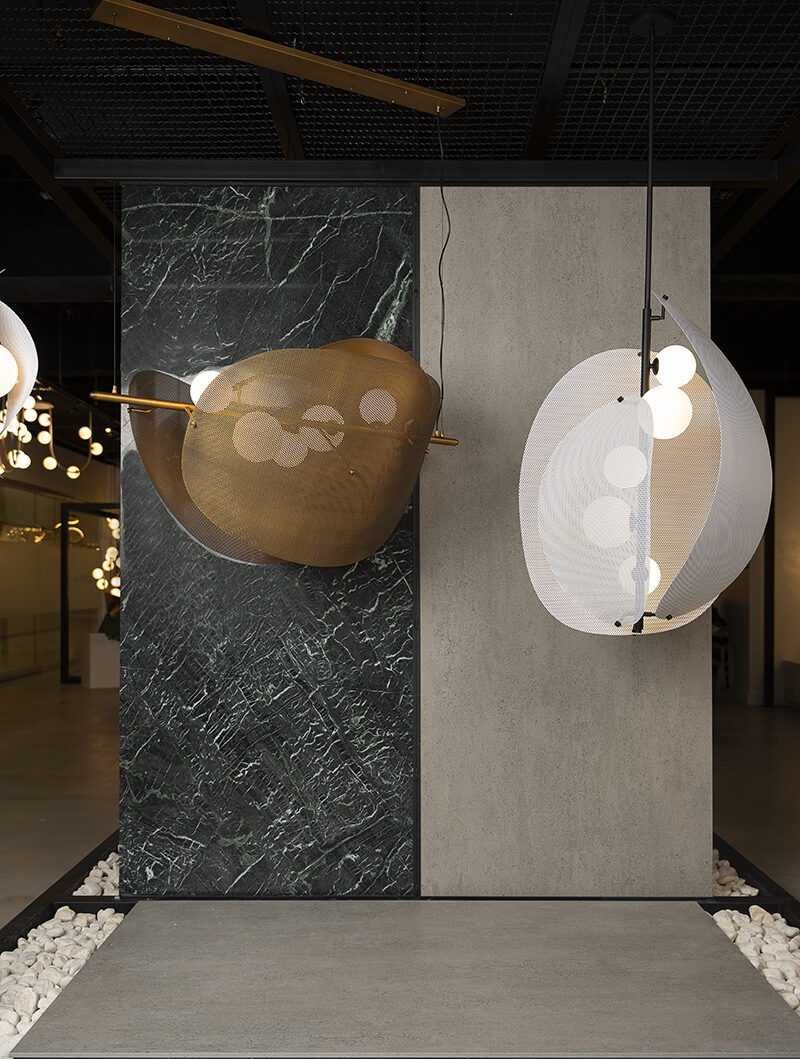 Los Angeles designer Mat Sanders, whose celebrity client list includes Jessica Alba and Nicole Richie, recently debuted a new lighting collection with Studio M that draws influence from around the globe. With seven unique style, Sanders transforms eye-catching materials, like leather, brass, and iridescent glass, into sculptural sconces, pendants, chandeliers, and table lamps. Inspired by the classic French brasserie, Chapeau conjures retro vibes with its elegant swoop of satin brass while Incognito is decidedly futuristic with a mirrored vessel that disguises a pearl-like bulb. Comprised of petal-like panels of perforated metal, the various styles of Chips are akin to hanging sculpture. “For the Chips series, I wanted to create something both ethereal and modern,” Sanders tells Galerie. “The chandelier is my favorite show-stopper because of its large-scale, machine-age presence that feels as light as a cloud.”—Jill Sieracki 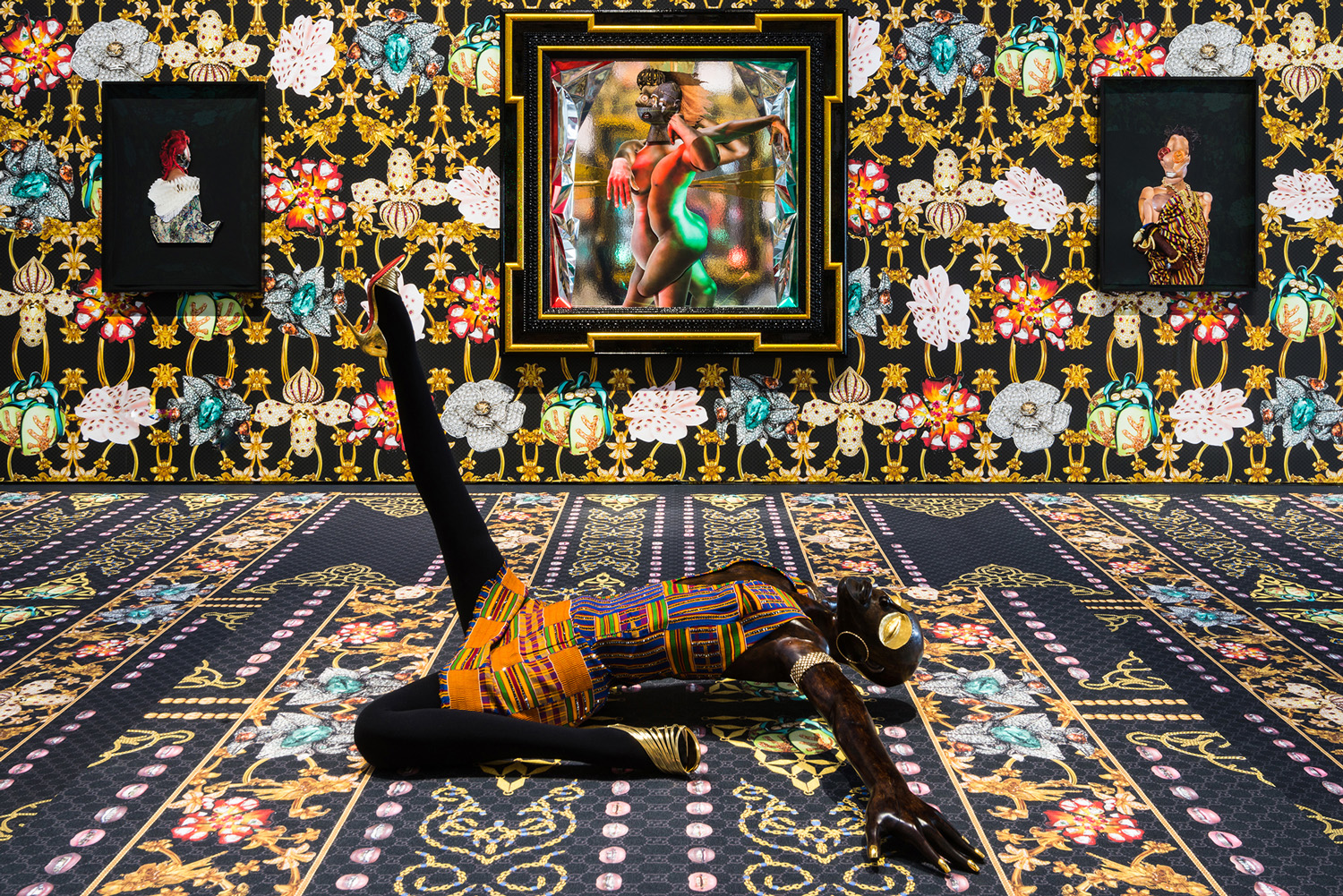 Multidisciplinary artist Rashaad Newsome‘s latest experiential work, Assembly, has taken over the historic Wade Thomson Drill Hall at the Park Avenue Armory, showcasing the artist’s innovative use of collage, sculpture, video, music, computer programming, and performance. The dynamic exhibition is filled with pulsating projections, Voguing, and Being, a digital griot programmed to recite poetry and lead workshops teaching decolonization. “Assembly will offer audiences a new way of thinking about rights, liberty, and humanity, using the so rarely explored paradox of the Black experience and the advancement of technology as a jumping-off point,” explains Newsome. This must-see exhibition will be on view until March 6. —Stefanie Li 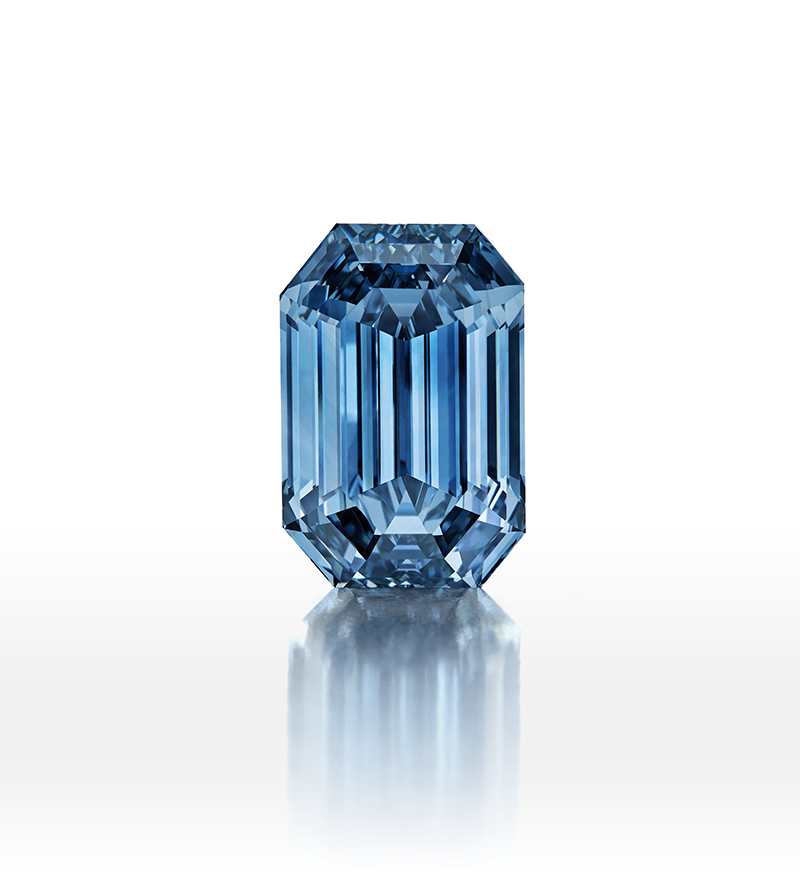 Blue diamonds are beloved in the jewelry industry for their exceptional rarity and allure. That sentiment is now being taken up a notch as De Beers, one of the world’s most prestigious diamond mining and retail groups, teamed up with diamond manufacturer Diacore to acquire a particularly rare blue diamond that had recently been unearthed at the famed Cullinan mine in South Africa. Together, the companies bought the whopping 39-carat gem for a total of $40.2 million, making it the most expensive rough diamond ever sold. This April, a 15-carat diamond cut from that stone will hit the auction block at the Hong Kong jewelry sale. If it achieves its asking price of $48 million, it will be the largest vivid blue diamond ever to be sold at auction. So what is it that makes this gem so special? The step-cut shape of the diamond is one of the reasons, achieved thanks to Diacore’s master diamond cutters working in concert with De Beers, a process which took an entire year. “Nothing of remotely similar calibre has appeared at auction in recent years,” said Patti Wong, chairman of Sotheby’s Asia. It is currently on view at the Sotheby’s galleries in New York, before it travels to exhibition spaces in London, Dubai, Singapore, Shanghai, Beijing, Shenzhen, and Taipei before reaching its final stop in Hong Kong. —Lucy Rees

Cover: Raqib Shaw, A Summer of Sombre Stirrings.
Photo: Courtesy of the artist
Next Post