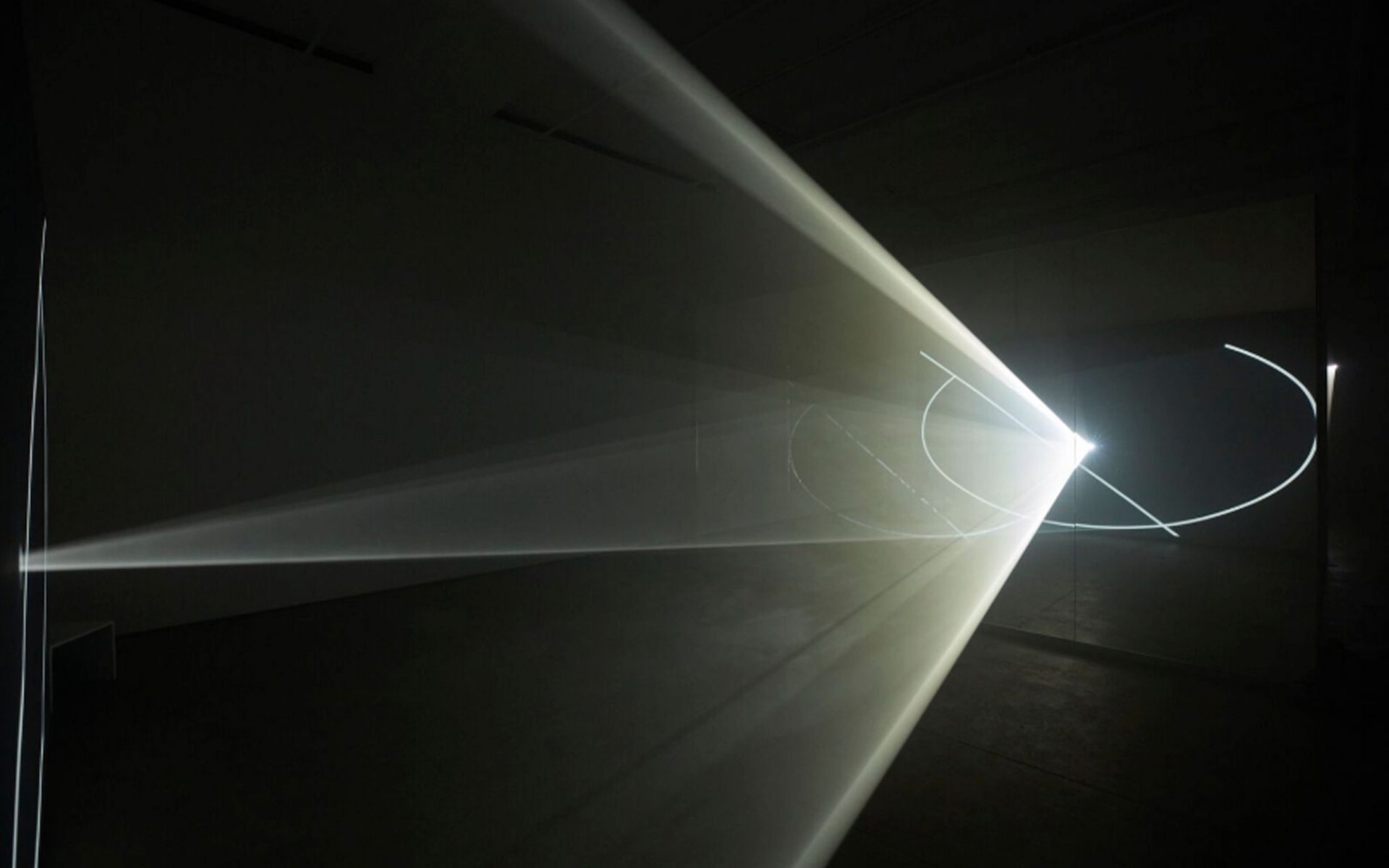 A swirl of haze had reached Sean Kelly’s front desk on a misty Saturday morning after meandering through Split Second, Anthony McCall’s sixth exhibition at the gallery. The show presents two new solid-light works alongside a series of black-and-light photographs and Doubling Back, an installation of horizontal moving projections of light that had its debut at the 2004 Whitney Biennial and marked his return to artmaking after a 25-year hiatus. The artist was busy making graphic design for artist books during his years away, but he felt an internal pressure to return.

“The invention of the haze machine was one of the major factors behind my return to artmaking,” the 72-year-old tells Galerie, underlining the importance of haze for the hallucinatory immersion his light installations generate. “The galleries had started showing that moving images and light now could be visible.” The imprint of haze on McCall’s rays of light is not unlike paint on canvas—the light pierces through pitch-blackness, which is made visible and tactile through the swirling ethereality of haze, just like pools of paint encompassing an otherwise blank surface. His solid-light works were the subject of a solo exhibition earlier this year at Brooklyn’s multidisciplinary art space Pioneer Works, where vertical projections had created paths of light between the floor and ceiling, reminiscent of triangular tents made out of moving lights. Throughout the show at Sean Kelly’s dimmed space, viewers find themselves prompted to grasp the light, coming as near as possible to feeling the intangible. “The process starts with a projector on one end and the wall on the other,” he says about his method for creating a hybrid of cinema, drawing, and sculpture. “The second I turn the haze machine on, a straight line on the wall turns into a flat triangular blade enlightening the space and a circle on the wall becomes a giant cone of light.”

True to the artist’s description of his orchestration, the codependency between light and haze yields a mesmerizing visual experience, most gloriously displayed in Split Second (Mirror). Encountering their own reflections on the mirror amid bursts of moving lights, the audience slowly process their engagement with the planes of light, occupying the space akin to abstract drawings suspended in air. “The work is full of paradoxes, almost like a riddle,” says McCall, noting that the light comes from two opposite directions into the center through the mirror. The exhibition manifests the potential of McCall’s otherworldly installations to claim the space and paint the invisible as seeable; they suggest contemplation and repose amid our hectic routines. “The audience is drawn into a static exchange with the work,” says the artist, explaining his decision to have his projections move at a slow pace. “Looking at something moving really fast requires you to stop and watch, but the opposite asks for engagement, just like encountering a sculpture and slowly rotating around it.”

The sculptural engagement is a key element for the artist, who has challenged traditional definitions of artistic mediums with his ability to give texture to immateriality. “I expect the spectator to be mobile and intrigued enough to spend time gauging what is going on,” says the artist. “Only one-half of the work is what I’ve put on view, but the other half is the audience being there and making use of the space.”

“Anthony McCall: Split Second” is on view at Sean Kelly through January 26, 2019.