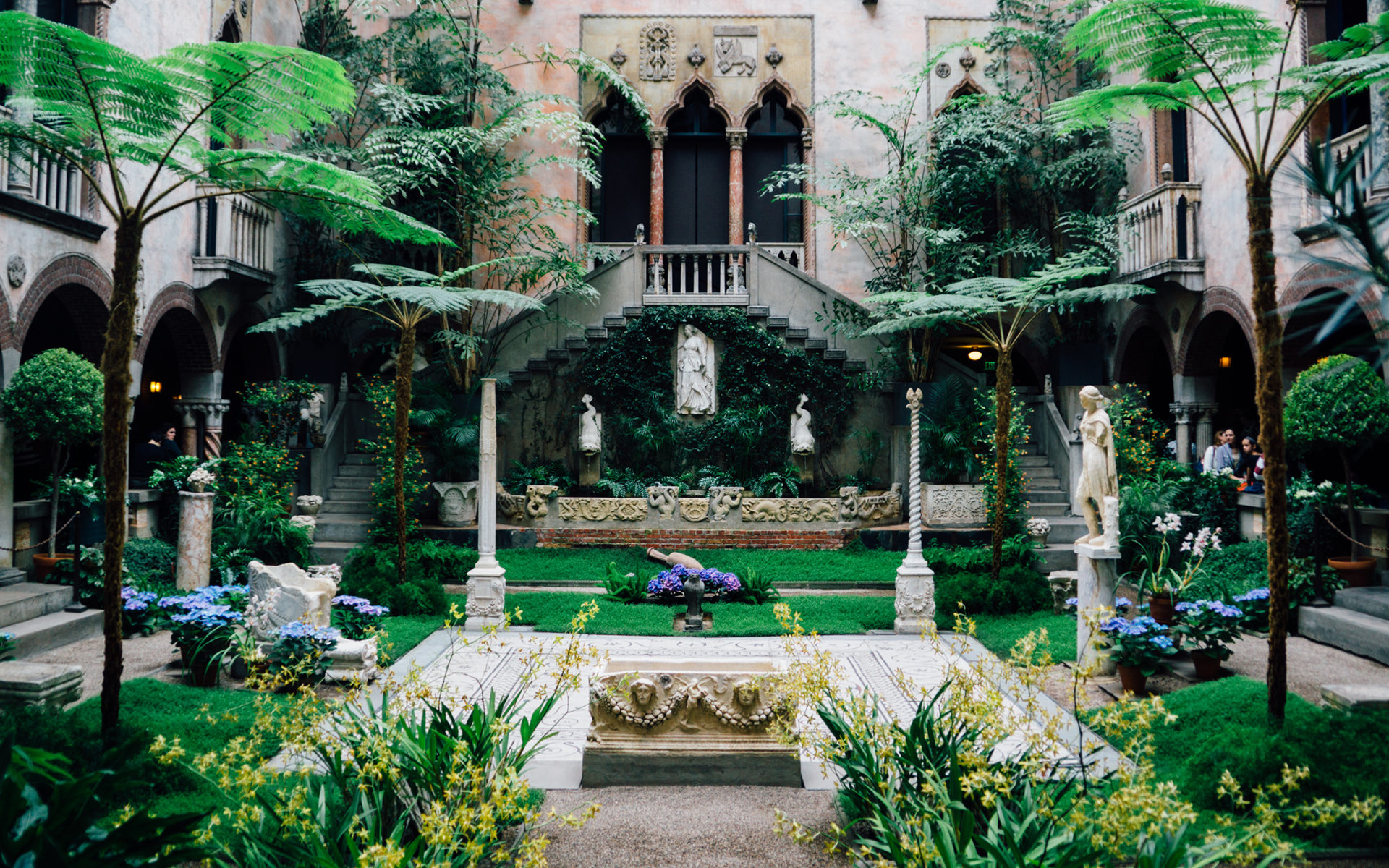 8 of the Most Beautiful Museum Courtyards in the U.S.

Whether they were originally created as private spaces within former homes or made specifically for the public to access, these courtyards within museums are sure to captivate art and nature lovers alike. The Garden Court at the Frick Collection in New York. Photo: Michael Bodycomb. Courtesy of the Frick

Once the mansion of the esteemed industrialist and avid art collector Henry Clay Frick, the Frick Collection boasts his treasure trove of 1,100 works of art from the Renaissance to the late nineteenth century. Originally residence’s carriage court, the Garden Court was masterminded by lauded American architect John Russell Pope upon the museum’s 1935 opening. As the only area within the museum where photography is permitted, this tranquil space has naturally become a hit on Instagram.  frick.org Created by Boston art collector Isabella Stewart Gardner in 1901 to house her expanding trove, the Venetian-inspired palazzo in the city’s Back Bay neighborhood is known for its magnificent-enclosed courtyard. Combining many influences— including Roman, Byzantine, Gothic, and Renaissance—the space is a gorgeous expression of Gardner’s love of Italy. gardnermuseum.org The Getty Villa was envisioned in 1974 by business tycoon J. Paul Getty as a space to house his massive art collection. Inspired by the grand Villa dei Papiri unearthed in Herculaneum in the 1700s, it contains many garden spaces. The largest is the Outer Peristyle, which contains ancient Roman plants surrounding the gigantic 220-foot long reflecting pool, opulent covered walkways, bronze replicas of statues from Villa dei Papiri, illusionistic wall paintings, and unparalleled views of the Pacific Ocean. getty.edu

Visiting the Met Cloisters feels like being transported from New York City to Medieval Europe. Set in Upper Manhattan’s Fort Tryon Park, this extension of the Met displays art, architecture, and gardens from the Middle Ages. Within the grounds are three different gardens: Cuxa Cloister, Bonnefont Cloister, and Trie Cloister. Pictured above is the Gothic Bonnefont Cloister, which dates from around 1300 and came from a Cistercian abbey in southwest France. Planted with over 250 different species of herbs once used in the Medieval era, the garden also boasts spectacular views across the Hudson River. metmuseum.org For fans of Rodin, the North Carolina Museum of Art is a must-visit. The institution contains an exceptional holding of Rodin sculptures (the largest outside of Paris) thanks to generous donations from collectors Iris and B. Gerald Cantor. Just off the galleries is the beautiful Rodin Garden, where sculptures are dispersed among the bamboo trees and surround the reflecting pool. Rodin’s technical mastery can be experienced from all angles. while natural light illuminates the textured bronze sculptures. ncartmuseum.org Bringing Italian architecture to Wisconsin, the gorgeous Villa Terrace Decorative Arts Museum was designed and built by architect David Adler in 1923 to resemble a 16th-century Northern Italian villa. Originally the family estate of Lloyd R. Smith, it now accommodates art and furnishings dating from the 15th through the 18th centuries. The Mercury courtyard features a sculpture of the god (whose torso dates to the 1st century) in the center surrounded by elegantly clipped Boxwood hedges. villaterracemuseum.org Garden in the Yamato-kan building of the Morikami Museum and Japanese Gardens. Photo: Blanca Stella Mejia. Courtesy of Flickr

Celebrating Japanese heritage and nature, the Morikami Museum and Japanese Gardens are another destination with many gardens to explore. After wandering through the museum’s original Yamato-kan building and learning about Yamato Colony history and contemporary Japanese culture, visitors can meditate in the inner open-air courtyard. The Zen garden is described as kare-sansui, which translates to a peaceful dry garden of mostly rocks. morikami.org The Smithsonian National Portrait Gallery collects works depicting notable figures that have shaped American history and has the largest collection of presidential portraits outside of the White House. With a stunning blend of classical and contemporary architecture, the Kogod Courtyard is an extraordinary addition to the esteemed Smithsonian Institution. Top international architecture firm Foster + Partners crafted the undulating glass-and-steel roof that cleverly allows natural light to flood into the large space. npg.si.edu