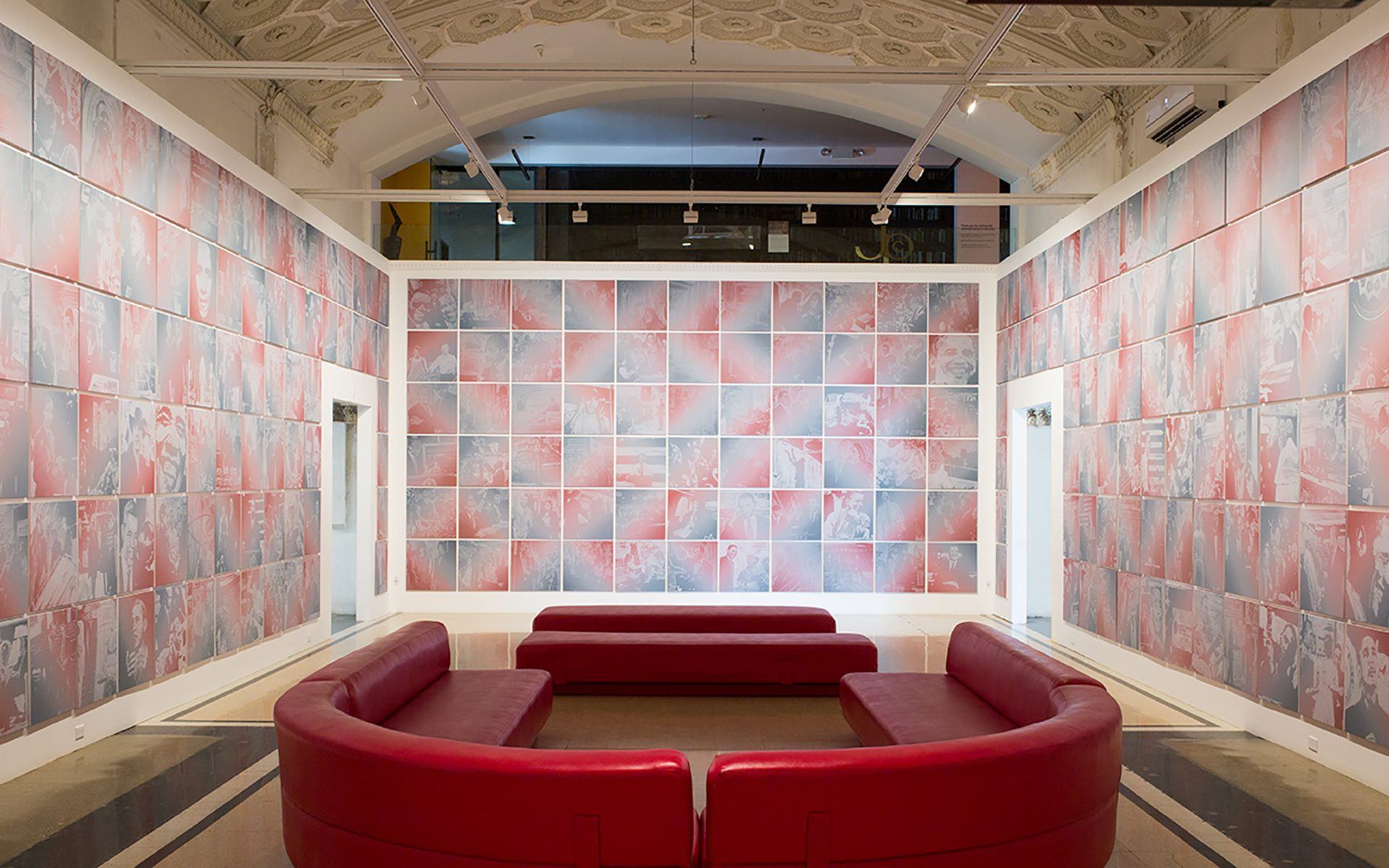 Over the course of one week, Pruitt answers three questions each day and shares his entries with Galerie Since the early 1990s, artist Rob Pruitt has been courting controversy with his painting, sculpture, and installations. Among his most notorious works was 1998’s Cocaine Buffet, in which the artist set up a 16-foot mirror with a line of real cocaine at the center and invited guests to partake in it.

He’s also done a book-signing in the nude with nothing more than a stuffed panda on his lap. And in 2015, at a show at the Brant Foundation that doubled as a 50th birthday celebration, he organized a flea market, which included among its wares the Brant family’s possessions such as Harry Brant’s gold leather jacket and Stephanie Seymour’s castoff designer duds. Power of the Panda (Parent and Child), 2000. Photo: Courtesy of the artist

In his early days, Pruitt’s penchant for controversy landed him out of favor with the art world for several years. But by 2001, when he was creating his glittery paintings of panda bears (which are now something of a signature), his career was back on track. “I see it as a kind of corporate damage control—like trying to market Perrier after they found benzene in it, or Firestone tires after they exploded,” he told the New York Times about his panda paintings in 2001. ”I was a reviled figure, but everybody loves a panda. They’re the stars of every zoo they’re in.” Currently, Chicago’s Stony Island Arts Bank (SIAB) is restaging Pruitt’s “Obama Paintings” exhibition (through August 25), which he originally created in 2009 during President Barack Obama’s first term in office. Pruitt set out to create one painting of Barack Obama per day, each 2-foot-by-t-foot, in a gradient that dissolves from red to blue. By January 20, 2017, he had completed nearly 3,000 of the canvases. “What feels great is to have these paintings come to Chicago, which is where Obama began his life of public service, in the very community where the Stony Island Arts Bank is,” Pruitt told ARTnews in April.

As his show is currently on view at SIAB, we’re thrilled to have Pruitt share his daily journal with Galerie at the behest of Aspen Art Museum CEO and director Heidi Zuckerman, who kicked off this series in January with her own daily journal. The AAM was the site of Pruitt’s first solo museum survey, “Rob Pruitt, An American Folk Artist.”

You can also gain more insights into Pruitt and his work in an interview he did with Zuckerman during his show, an excerpt of which you can read here. Enjoy! “I was behind this person in traffic today on the 10- I’m very happy not to be friends with him.”–Rob Pruitt Photo: Courtesy of the artist

What was the most surprising thing about your day?
What surprised me most was as I was sitting inside admiring the view from the picture window, the first thing that caught my attention was an adorable little black sparrow on the lawn, but then as my eyes focused, I saw that it was actually Gilda’s morning poop.

What made you feel loved today?
As I was organizing the calendar for my daily Instagram post (@robpruitt5000) I saw on the internet that it was National New Friends’ Day, which reminded me of three new friends I made this week, Robert, Michael Reynolds, and Stephen Kent Johnson. “Discovered a beautiful bird’s nest outside my bedroom window this morning.”–Rob Pruitt. Photo: Courtesy of the artist

What was the most surprising thing about your day?
My friend Brook called me from the parking lot of the nearest supermarket to say that she’d just encountered a pack of young wolves. So now I’m not letting Gilda out in the yard alone.

What made you feel loved today?
June invited me over to her place in La Quinta for homemade Korean food and to discuss a project in Seoul.

What is one thing you would like to have done differently today?
I wouldn’t have slept so late because in the desert heat it’s so much easier to do things like hikes and errands early in the morning, but I slept until 10:30, at which point it’s already very hot. What was the most surprising thing about your day?
Gilda and I were doing a photoshoot for a design magazine so I gave her a bubble bath and she didn’t mind it, even though she usually hates baths.

What made you feel loved today?
I spoke to Jonathan [Horowitz] on the phone because I’m in California and he’s back in New York. We talked for over an hour and he didn’t seem to want to hang up.

What is one thing you would like to have done differently today?
I didn’t close the blinds before going to bed, and the desert sun woke me up at 5:30 in the morning.

#Repost @sevefavre – Here are two artistic installations in Matera @matera2019 and @matera_alberga that fit particularly well into the history of this site where water management has been based on an ingenious, economic and ecological system. It undeniably raises questions about our consumption and management of water and drinking water in particular… For example, in the Middle Ages, the fountain keeper was a very important post and tackling the integrity of the fountain and water was a serious misdeed. 1. Rob Pruitt, Evian Fountain, 2000 The Evian Fountain represents the beauty of the cliché image but it helps us to question also the problems about the topic of the water as a precious resource to safeguard and protection in the city as Matera, where a wise, wide and historic storage tanks system for the water storage contributed to bring Matera to be part of the UNESCO Heritage. 2. Dario Carmentano, La Fonte del Tempo, 2019 It is an interactive artwork that is completed with your participation – by slowly filling a glass of water drop by drop, from a natural source. It takes about 10 minutes and is an exercice in getting back to the soul of the Sassi and its rupestrian civilization. . @dariocarmentano @matera_alberga @le_dimore_dell_idris @matera2019 @materainside . #contemporaryart #matera2019 #art #arte #materaalberga #matera #kunst #artexhibition #artgallery #artinstallation #matera #robpruitt #dariocarmentano #arteprima #openfuture #italy #basilicata What was the most surprising thing about your day?
I’ve spent my whole life trying to learn to swim, and today I was finally able to swim an entire lap.

What made you feel loved today?
An RSVP I sent to express that I wouldn’t be able to attend an event was returned with a very warm, “We’ll miss you” and “loved your letter so much that I’ll save it forever.”

What is one thing you would like to have done differently today?
I wish I had been nicer to the rental car agent on the phone because it’s not her fault that the car smelled like cigarette smoke.

Studio caption contest from June ??? Submit your own for July in the comments. Favorites will be posted on the story throughout the week! Be sure to check out the ones we love!! ?? What made you feel loved today?
I felt loved when I woke up to Gilda sleeping on top of my head.

What is one thing you would like to have done differently today?
I wish I had worn sandals on the patio so my feet wouldn’t have gotten burned.

Lots of love for the De La Cruzes? #Repost @delacruzcollection ・・・ Installing Rob Pruitt’s faces in the second floor for our next exhibition, “From Day to Day.” Take a look ? @robpruitt5000