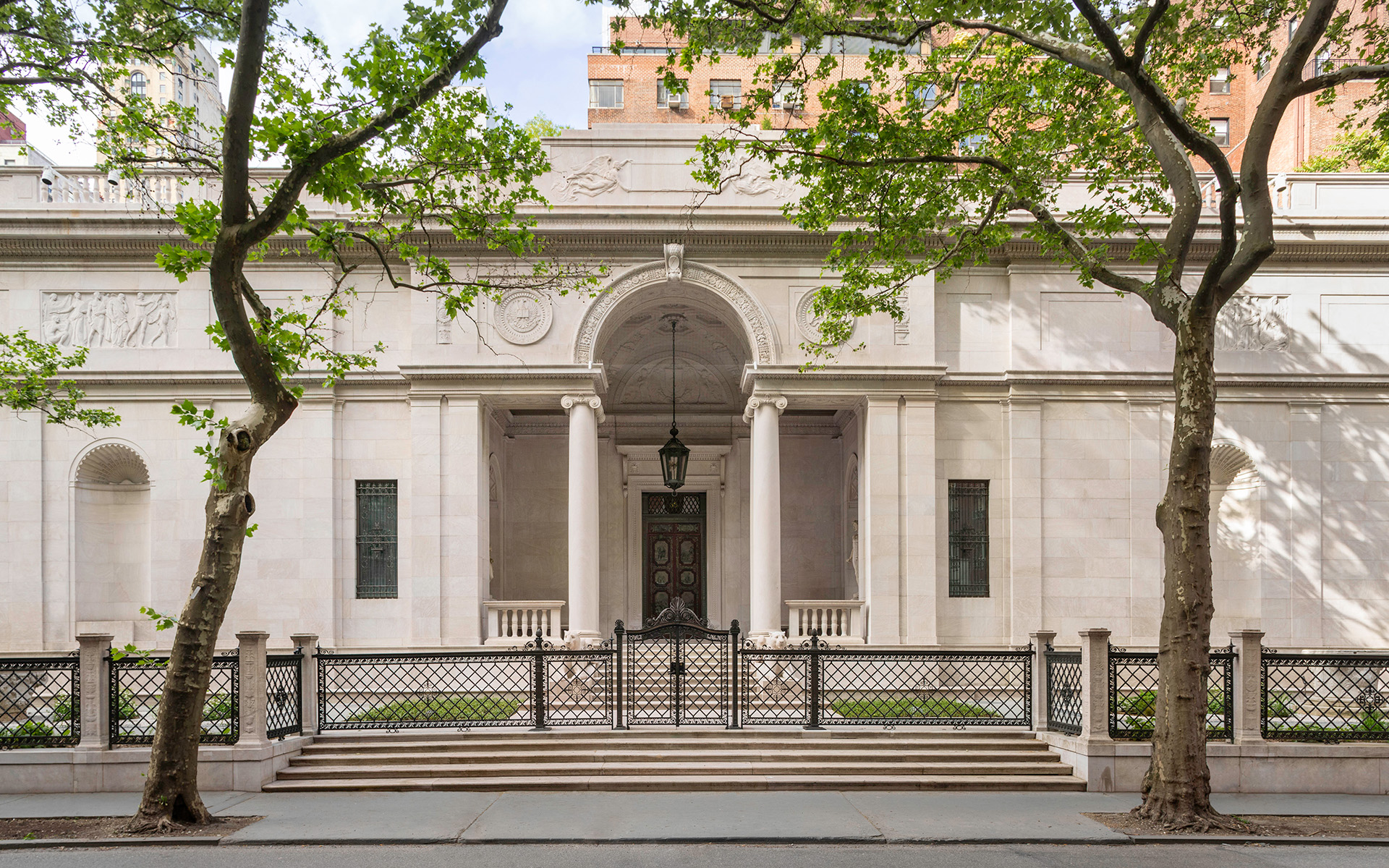 5 Art-Filled Gardens to Explore This Summer

From the highly-anticipated opening of the Morgan Library Garden in New York to a new collaboration between Richard Serra and Thomas Phifer at Glenstone in Maryland, these are the best nature-filled art experiences of the season 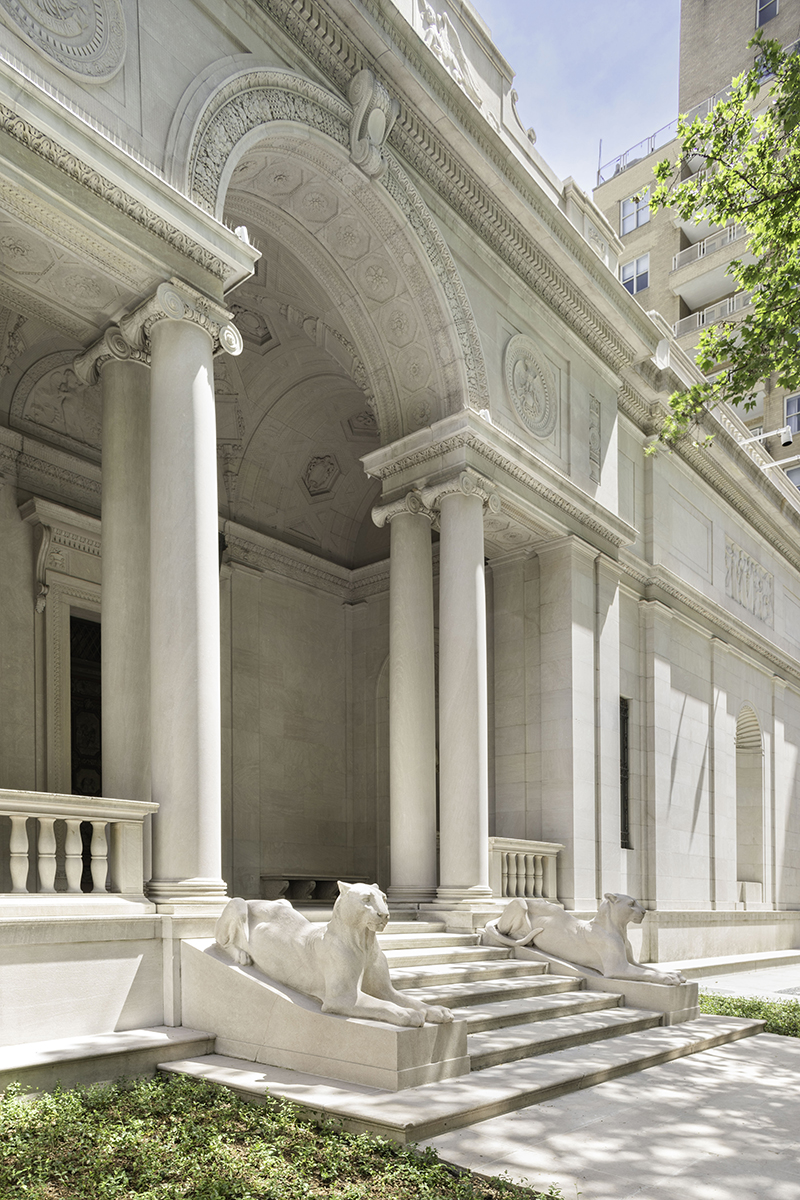 There is no denying that the sleek architecture of a white cube space provides an exceptional art viewing experience, allowing a collective experience and the opportunity to contextualize artworks in relation to one another. But after the pandemic, public art and the newfound joy of the outdoors has gained another level of relevancy, becoming necessary for those who could longer make their way into the museums and galleries.

Now, with summer in full swing, there are plenty of new outdoor experiences to discover, offering a marvelous pastime to take a break from the daily haste. And while many parks in and around New York—such as the Socrates Sculpture Park or the Storm King—present ambitiously curated outdoor exhibitions with large-scale sculptures dotting the ample greens, one mustn’t overlook the smaller gardens that promise a more intimate encounter too. 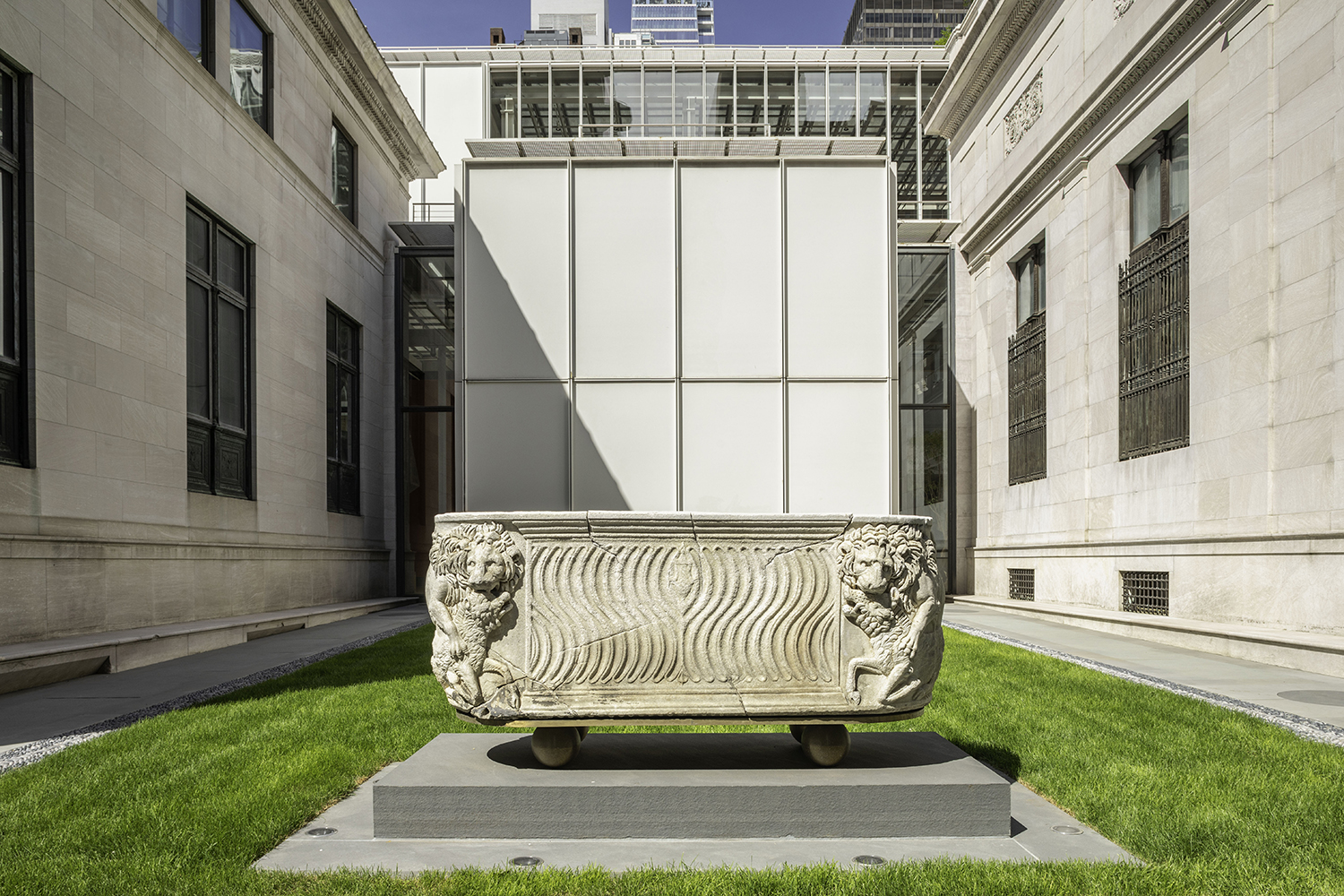 Tucked along the corner facing 36th street, the Morgan’s Neoclassical library proves the possibility of seclusion within Midtown’s hustle and bustle. Designed by the British landscape architect and landscape designer Todd Longstaffe-Gowan, the highly anticipated new garden is a testimony to founder J.P. Morgan’s initial vision from 1906 to decorate his library with a south-west facing garden that greets the visitors into his mesmerizing book-filled personal library. 112 years later, Longstaffe-Gowan fulfills the American philanthropist’s team with his first commission in the U.S. and revitalizes a site that has been dormant for decades. “In the absence of any known designs, we pursued a scheme which aims to reflect Morgan’s fascination with European culture and one which neither compromises the architectural integrity of the library nor distracts from its monumental yet intimate character,” the architect told Galerie.

8 Garden Sculptures That Make A Statement 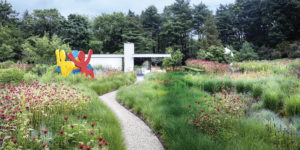 Elevated a few steps from the street level, the public garden yields its lush offerings to visitors with some room for discovery, “just as the chaste facade of the library conceals the richness of its contents,” according to Longstaffe-Gowan who formerly designed landscapes for Hampton Court and Kensington Place. A back portion of the garden connects with the institution’s relatively newer addition which was helmed by Renzo Piano in 2006, bridging history and the contemporary with a fresh breath. While two lionesses guarding the library’s entrance may pose as the initial scene-stealers, take a few steps to encounter another show-stopper. A third-century Roman sarcophagus, which is adorned with ornate carvings, was acquired by Morgan himself, but today the antique tomb as the architecture explains is, “an amuse-bouche for the passers-by of the riches that await them within the library and museum’s collections.” Furthermore, he considers the ancient artifact as a mediator between the institution’s different buildings erected in different time periods. 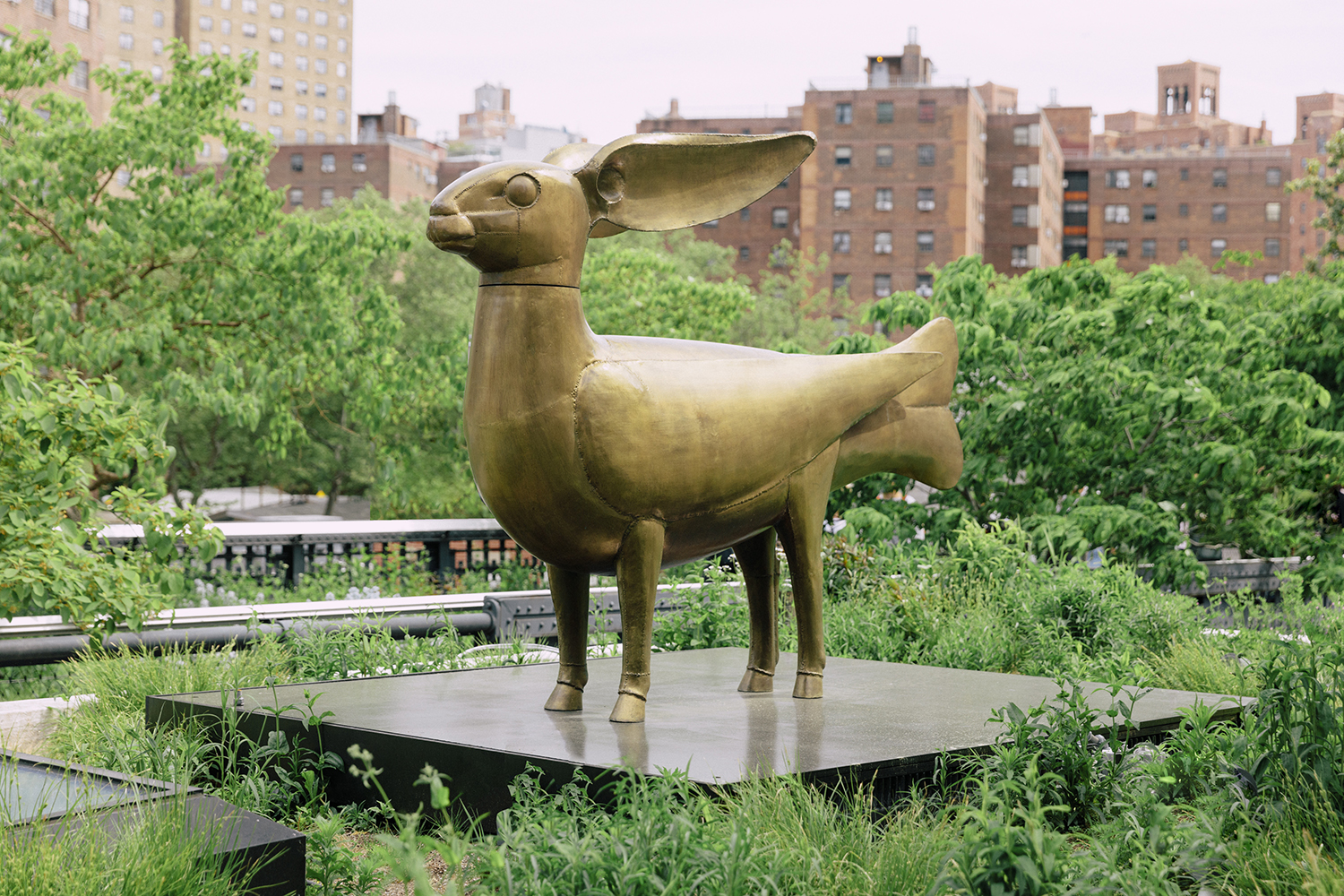 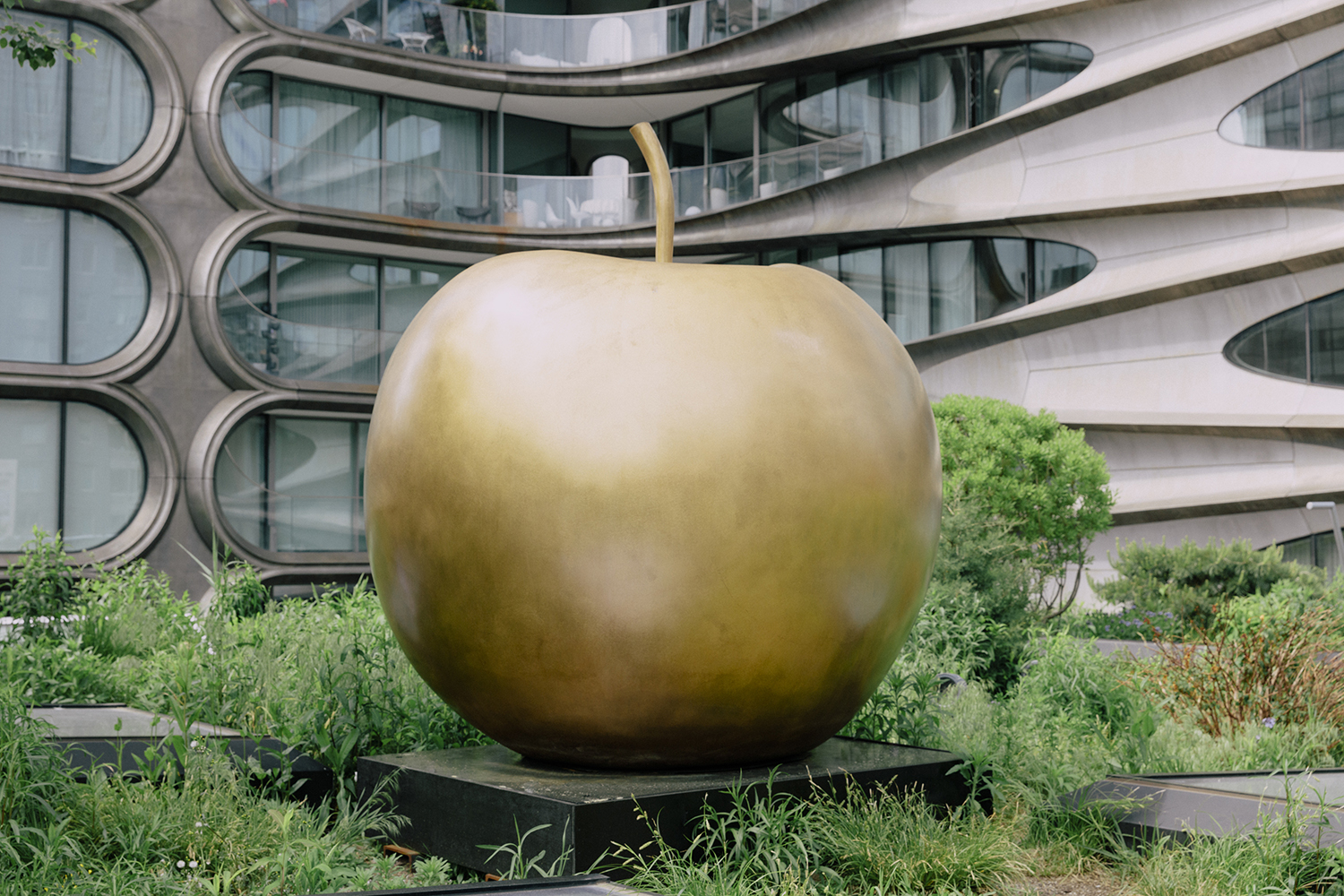 Viewable from the iconic High Line, the secret extension of Kamsin gallery’s 27th street space exhibits “Au Grand Air,” a series of large-scale sculptures by the late French duo Les Lalanne. Known for marrying design with sculpture, the husband and wife artists’ three works celebrate summer with a dash of surreal whismy. Their signature biomorphic visual lexicon fills the rooftop sandwiched between the Hudson River, a Zaha Hadid building, and the Manhattan skyline. Francois-Xavier Lalanne’s bronze sculpture, Lapin à Vent (2007) is a hybrid of a rabbit, a fish, and horse; while Claude Lalanne’s Pomme d’Hiver (2008), both filtering the marvels of the earth through the late couple’s mythic imagination. 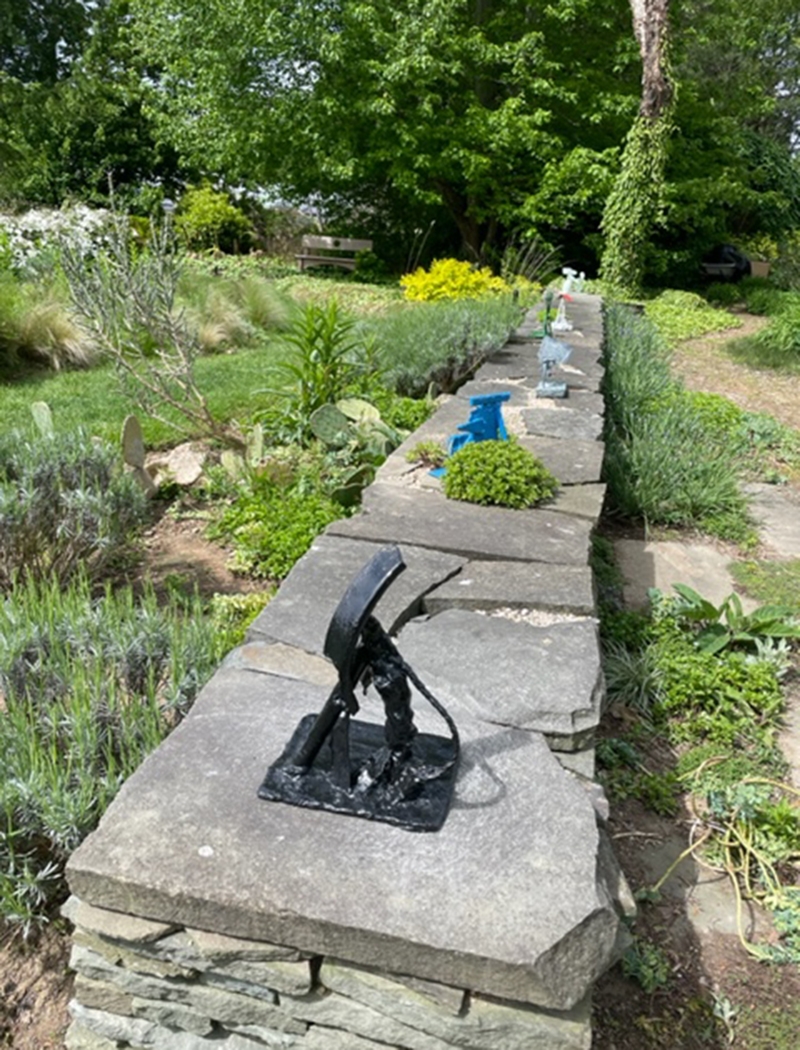 An installation view of "Sculpture in the Garden 2022". 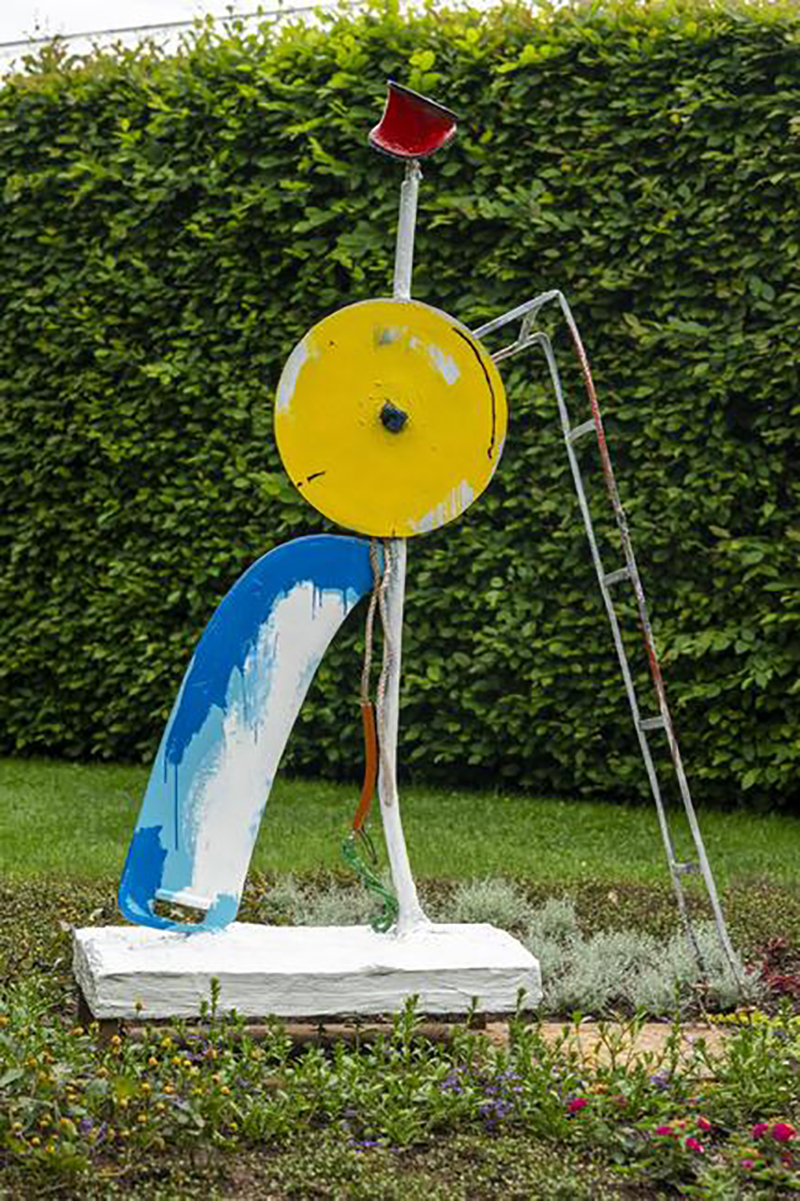 As the weekend getaways to the Hamptons begin to fill many art-lovers calendars, a garden in Mattituck promises the perfect stop in North Fork to enjoy another husband and wife’s joint show. Organized by New York-based Swiss artist Ugo Rondinone and Landcraft Garden Foundation, Sculpture in the Garden 2022 features works by Sam Moyer and Eddie Martinez who are both primarily celebrated for their two-dimensional art. The show however invites visitors to explore the third dimension in their practices, featuring eleven sculptures by Martinez and three by Moyer. The elements of energy and texture in abstraction have been critical for both artists’ approach to surfaces, and with the outdoor sculptures, they further their experiments on similar notions with the vistas of a lush garden.

"The essence of an artwork shouldn’t be altered due to the garden, but it surely can be enhanced."

“The exhibition at Landcraft Gardens cannot exist without the artworks in relation to the garden—and the artworks cannot gain proper recognition without the garden,” Rondinone tells Galerie. “It is all about finding the right balance between the animated garden and the static of the artworks.” Similarly, the couple’s collaboration hints at intimacy and unity—both with one another and the nature. Martinez’s sculptures for example include objects he has collected from nearby beaches as well as the Brooklyn streets, including rubber, wood, cardboard or bottle caps. Moyer’s concrete or bluestone works on the other hand rely on a sense of balance and rhythm, letting wind and gravity take in part their presence. “Like in any other relationship, cooperation is key,” Rondinone adds. “The essence of an artwork shouldn’t be altered due to the garden, but it surely can be enhanced; it’s a coexistence in what feels like a physical acoustic space — rich and reverberant.” 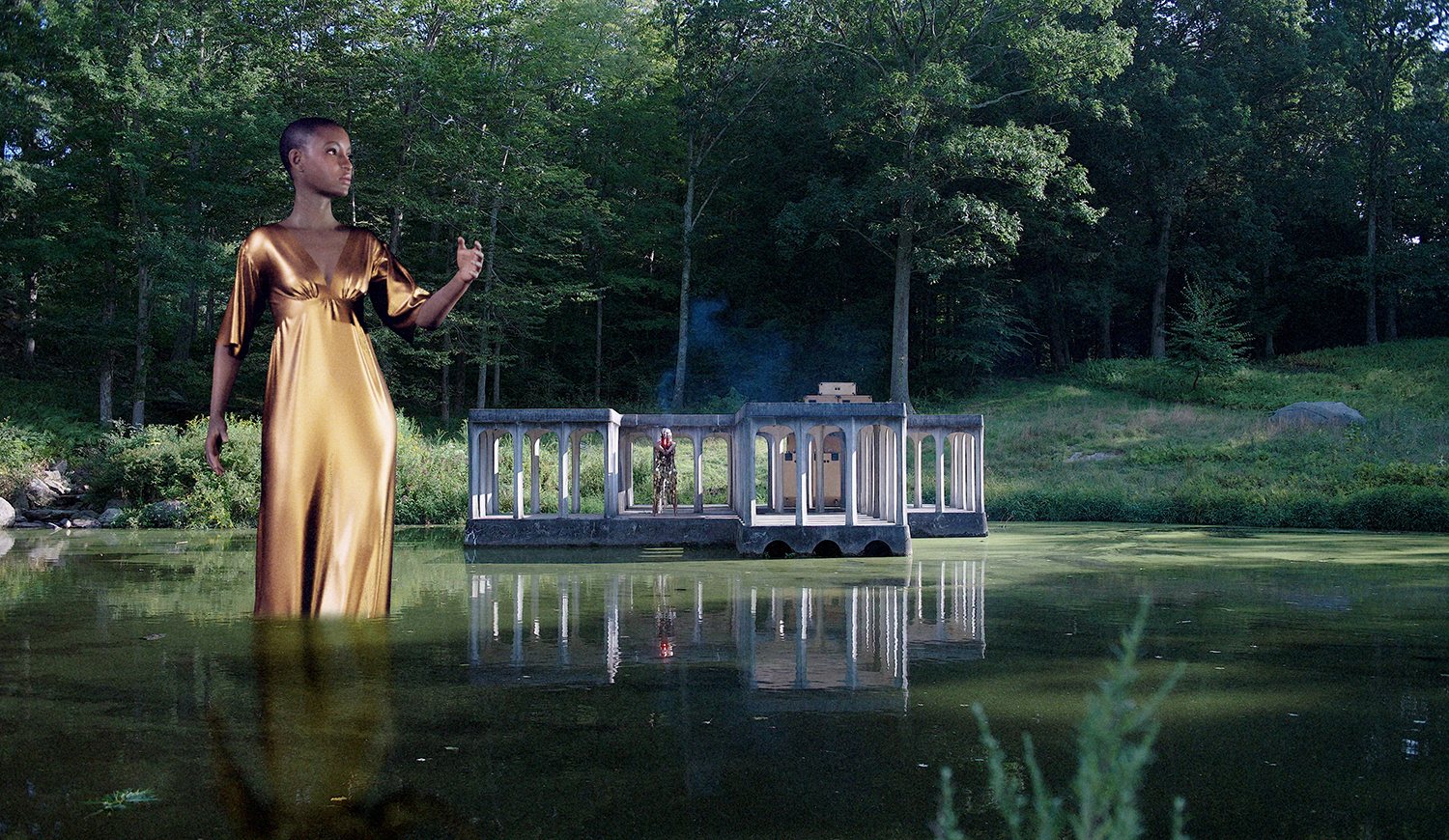 Another delightful route for those seeking an escape is found in New England, and while the region is famous for its fall foliage, summer is perfect for a dependable weather, hiking, and even lake drips. Philip Johnson’s Glass House in New Canaan, Connecticut revels in attracting both architecture and art buffs, and this summer, gardening experts. After unveiling David Hartt’s intricate installation A Colored Garden last summer, the in-house curator Cole Akers and Hartt further their exploration of the still lives paintings by the local 19th century artist Charles Ethan Porter. Hartt had installed his garden on the 49-acre land inspired by Porter’s floral paintings to embody both the ephemerality and resilience of botanics.

This year, the institution adds the installation a film shot on site by the artist as well as an exhibition of Porter’s paintings. Exhibited inside the campus’s Da Monsta building, the fifteen-minute film delves into multifaceted legacy of Modernism, antiquity and beauty through inspirations from a Nicolas Poussin (attributed) painting on view inside Johnson’s glass house. After unveiling the garden’s second year and the additions to the show last week with its summer gala, the Glass House provides a multilayered exploration of a contemporary pastoral language through various practices and textures. 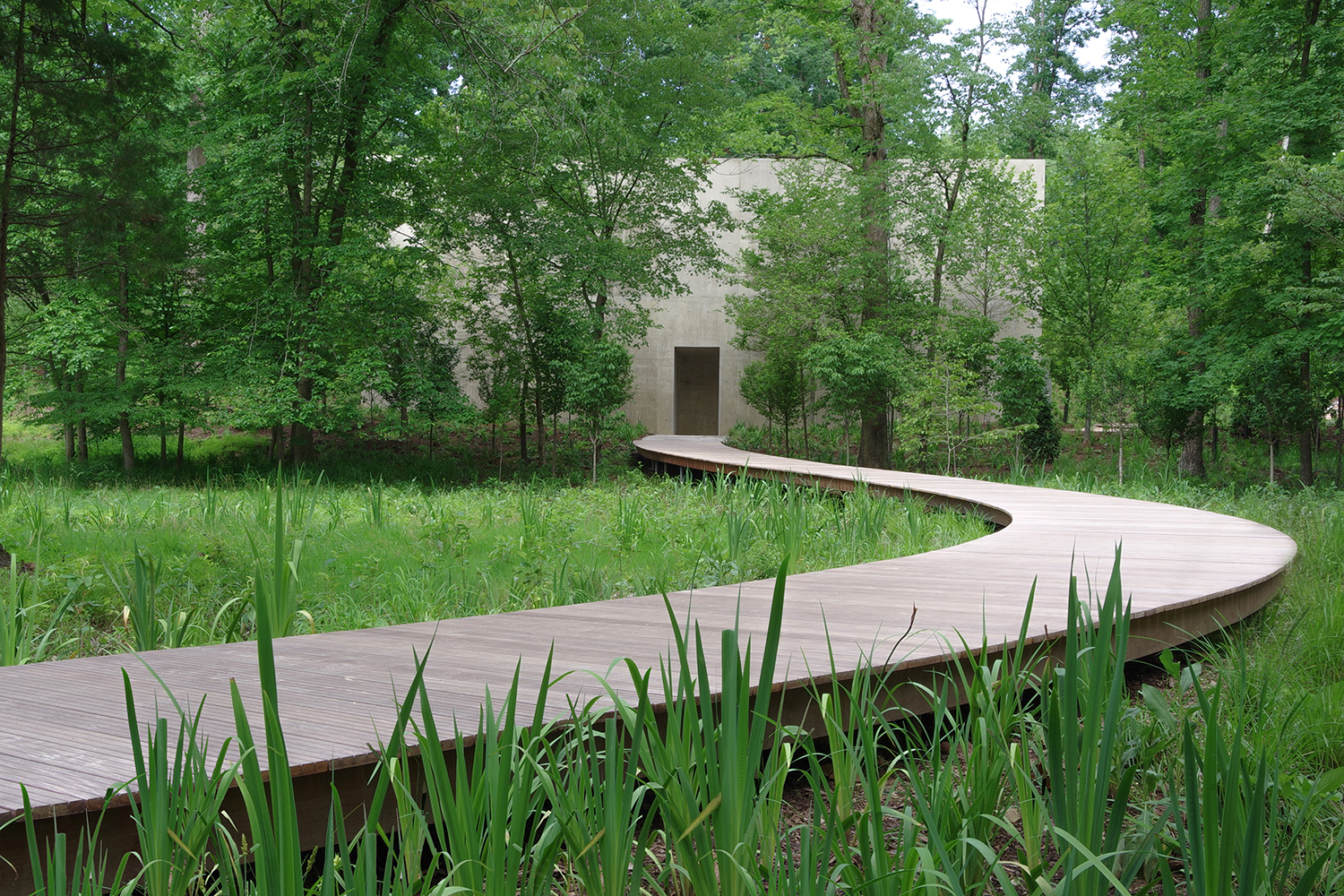 The town of Potomac in Maryland is close enough to veer away from the New York parameters to experience Glenstone Museum’s unveiling of Richard Serra sculptures—for which he has collaborated with the American architect Thomas Phifer—spread across the ample 300-acre site’s Woodland Trail section. As a one-of-a-kind demonstration of architecture’s merger with art, the four cylindrical-form defies logics of both art and architecture. By each weighing 82-tons, the halos have been built in the heaviest forms that a foundry can achieve. Fans of Serra’s work are not strangers to the architectural all-encompassing experiences essential in the Minimalist artist’s oeuvre. Here, however, the accent of architecture is displayed in optimum level, elevating the artist’s signature sentiments of transcendence and revelation into a direct dialogue with Phifer’s vision. Proceed through the bridges to reach the new addition to Glenstone’s ambitious display of art within nature, where works by the likes of Michael Heizer, Glenn Ligon and Lawrence Weiner burst out of the 50,000-square-foot indoor space.