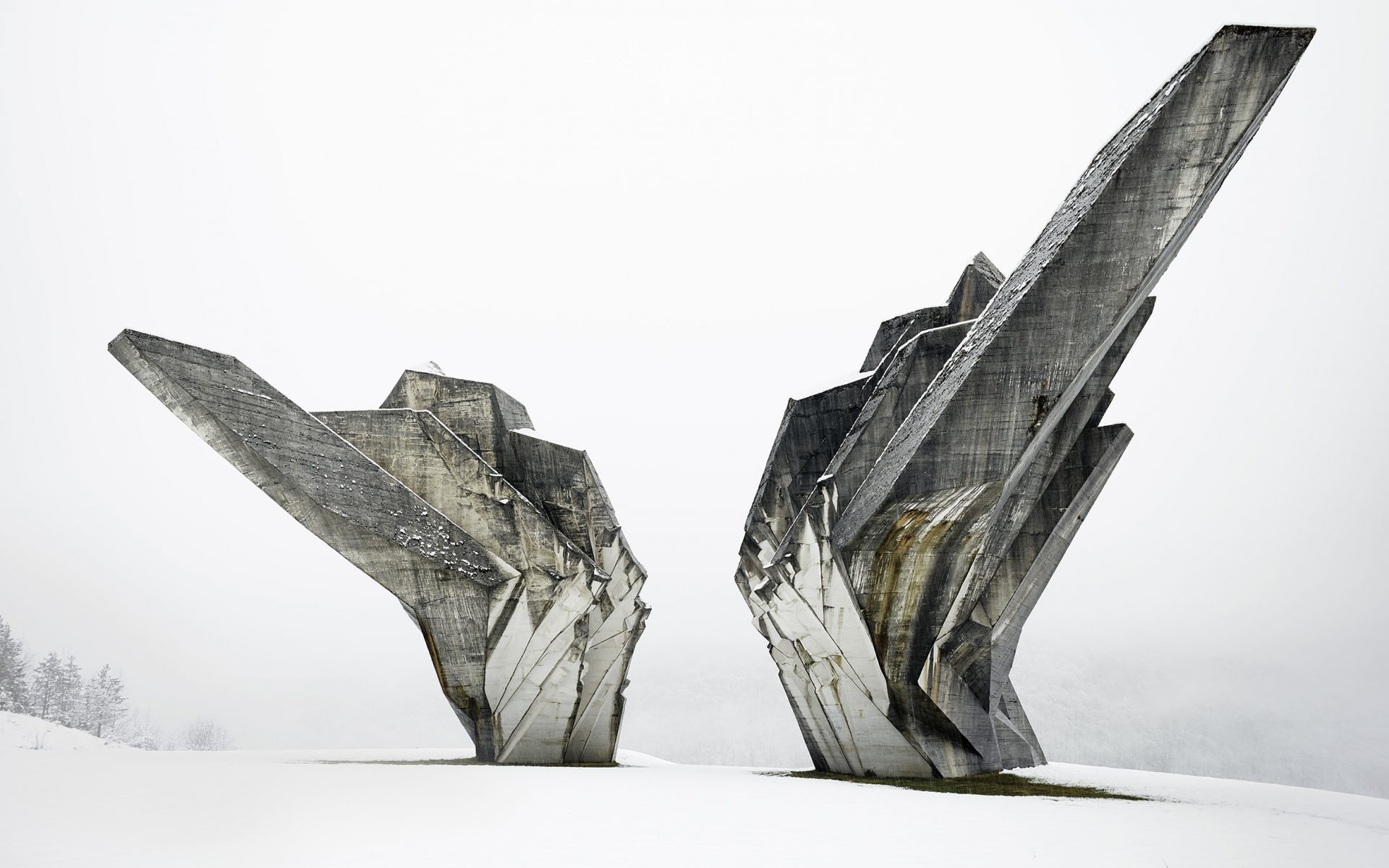 Miodrag Živković, *Monument to the Battle of the Sutjeska,* 1965–71, Tjentište, Bosnia and Herzegovina. This photograph is on view with the exhibition "Toward a Concrete Utopia: Architecture in Yugoslavia, 1948–1980" at the Museum of Modern Art through January 13.
Photo: Valentin Jeck, commissioned by The Museum of Modern Art, 2016

12 Great Exhibitions to See Before they Close

If you haven’t yet seen Catherine Opie’s first film, Brian Belott’s frozen sculptures, or Kyle Meyer’s photographic print weavings, they’re well worth the trip. But act quickly—these shows, along with the handful of other New York City standouts listed below, are closing soon. Catch them before they do. The artist’s first exhibition at the gallery spotlights a series of labor-intensive photographic print weavings that depict men wearing traditional feminine head wraps. The works combine traditional craft techniques in eSwatini with an exploration of the silenced LGBTQ community that lives there. Loosely inspired by Jack Kerouac’s 1957 novel of the same name, “On the Road” explores issues of mobility, freedom, and identity as illustrated by three Midwestern artists. This is the first time that Pace Gallery is showing works by the late American artist, focusing on a range of abstract paintings and drawings created between the 1940s and the late 1960s. This one-of-a-kind exhibition focuses on the inherent artistry of scientific glassmaking, which frequently implements the same glassblowing and flame-working techniques required of glass artists. Beck’s third exhibition at the gallery unites five diverse works, including a 17-minute video of an 18th-century statue, a sedimentary boulder reimagined as sculpture, and a suite of 24 drawings based on the 1972 publication The Universal Traveler. A group exhibition collates work by feminist artists of various generations. At its center is Nicola L, a multidisciplinary artist who has been working since the 1960s.

Belott’s show of “lost archaeological data,” in his own words, comprises peculiarities from frozen artwork to sand-encrusted calculators. Berislav Šerbetić and Vojin Bakić, Monument to the Uprising of the People of Kordun and Banija, 1979-81. Petrova Gora, Croatia. Exterior view. Photo: Valentin Jeck, commissioned by The Museum of Modern Art, 2016

The museum surveys the contradictory elements of postwar Yugoslavian architecture, which sought to meet the demands of both the capitalist West and the socialist East. The first major museum survey devoted to White in over 30 years, “A Retrospective” examines White’s devotion to creating empowering images of African Americans and the manner in which he inspired his many students, including David Hammons and Kerry James Marshall. A video documents an improvised walk, as well as a series of stumbles and pratfalls, through lower Manhattan. The film’s title draws reference to therapeutic “grounding” exercises.

Cover: Miodrag Živković, *Monument to the Battle of the Sutjeska,* 1965–71, Tjentište, Bosnia and Herzegovina. This photograph is on view with the exhibition "Toward a Concrete Utopia: Architecture in Yugoslavia, 1948–1980" at the Museum of Modern Art through January 13.
Photo: Valentin Jeck, commissioned by The Museum of Modern Art, 2016
Next Post