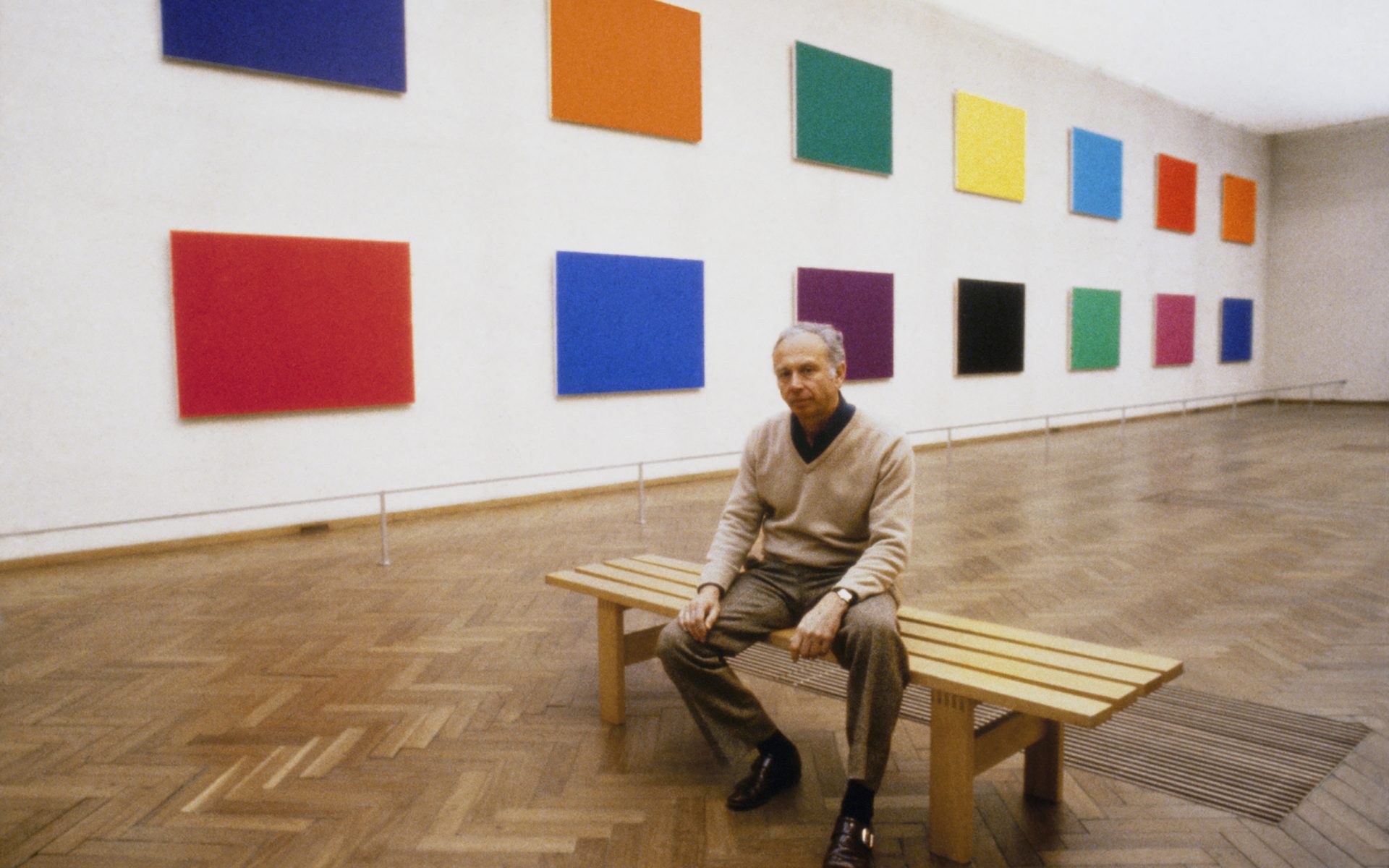 10 Fascinating Insights into the Creative Mind of Ellsworth Kelly

Kelly’s husband, the photographer Jack Shear, shares his memories of the artist on the occasion of a show of his iconic work at Matthew Marks

In 1978, the late American artist Ellsworth Kelly was commissioned to create a painting for a new building in Cincinnati. The resulting work, which consisted of two rows of nine panels, was the largest work he had ever made. It was called Color Panels for a Large Wall and it ultimately found a permanent home at the National Gallery of Art in Washington, D.C. Another version of that work, which Kelly had made and kept for himself, is being shown for the first time at Matthew Marks Gallery, where it will be on view through January 19.

In connection with the show, which also presents a selection of drawings, paintings, and collages, Galerie caught up with Kelly’s husband, the photographer Jack Shear, to get the backstory on this iconic artwork. We also got some intel on the impetus behind the formation of the Ellsworth Kelly Foundation, Kelly’s thoughts on his market, and the details of his fraught relationship with the Minimalists. Here are some of our favorite selections from our interview with Shear.

On Kelly’s Early Life
“Ellsworth lived from 1948 to 1954 in Paris, and when he was there, he only sold one work. One of the things that has always been said about Ellsworth is that when he was in Paris, they said his work was too American, and when he came back to America, they said his work was too European. So he was always slightly out of sync. That being said, he was not a follower of Mondrian, and I consider him the quintessential American artist. He’s like Walt Whitman in poetry or Joseph Cornell in sculpture. He had such a strong vision.” One of Kelly’s Hallmark Qualities Was His Belief in His Vision
“He always followed his own vision. When he was leaving Europe, he got sick, and he wired his parents and said, ‘I need $200 for my passage back to New York, and I need $200 to bring all my artwork back.’ They sent him $200, and they said, ‘Leave your artwork there.’ He went to all of the shipping companies, and Cunard was the only one that would give him credit. So he brought back all the paintings he did in Paris for $200. Now they are in all of the major museums in the world. That kind of foresight, believing in yourself, was really a hallmark of Ellsworth’s life.”

The Ellsworth Kelly Foundation and Its Mission
“Ellsworth and I started the foundation in 1991. At that time, he didn’t have any heirs. He didn’t have anyone to pass anything on to. I said to Ellsworth, ‘This makes sense.’ You have to put half to a third of your money and direct where it goes. There was no artwork in the foundation, only money, which was a purposeful decision. We only give grants because when you have artwork in a foundation there are strict rules and it has to be shown and accessible to the public. I also didn’t want to give it to artists to do an artist’s residency. We would like to give it to an institution to pick an artist to do a show of their works because we think that a show for an artist changes their life more than paying their rent would. It caused five institutions to focus on an artist who was underrecognized in their community.”

On Shear and Kelly’s Relationship
“He didn’t want to be labeled. He just wanted his art to be seen as what it was. Everybody that knew us—the collectors, the museums—knew what our relationship was. It was people out in the world that he was concerned about.” On the Relationship Between Artist and Gallery
“I feel that when we met, he really didn’t trust anyone too much—he had a series of people in his life, but he only liked to have one dealer at a time because he wanted to blame one person! There were a couple of times where he was in between two dealers and it was just a nightmare. He was with Matthew Marks from 1992 until his death. Matthew particularly is sort of an artist’s gallerist. He really looks after the artist.”

Recommended: 5 Fabulous Museum Shows to See in Washington, D.C.—If the Shutdown Ever Ends

The Backstory of the Color Panels
“The work was originally created for a corporation, but in the ’80s, a lot of banks went bankrupt, and they had to sell their corporate collections. We went to them and told them to give it to the Cincinnati Art Museum. But it was too big for them to show. So we said, ‘We will trade you two paintings for this painting.’ I thought we could just build a building for it by itself. Just that. But one day I was at the National Gallery and I think it was Jeremy Strick who said, ‘We have this wall with a Miró on it.’ He said, ‘Would Ellsworth ever think about doing something?’ I looked at it and thought, Bingo! Ellsworth reconfigured it so it was three rows of six.”

Kelly’s Fraught Relationship with the Minimalists
“I think the reason the minimalists disliked Ellsworth—I won’t say hate, but didn’t embrace—was because he drew flowers. I think they saw it as maybe feminine, maybe that he could actually look at nature and draw from nature. They couldn’t even comprehend that! Ellsworth was trained classically. But that kind of looking, and being able to really study something, was special.” Kelly’s Obsession With Color
“From the mid-1960s, Ellsworth kept bottles of all of his paints. What we’ve been doing is taking the bottles and brushing the paint onto canvas so that when a painting is illustrated in a book or catalogue, we can send the color so that they get it right. The way he mixed color was incredible. Everyone thinks he used color out of the tube. He never did. He used to say, ‘There are a thousand yellows in the world.’”

Kelly’s Views on the Art Market
“He always told this story about the time Willem de Kooning said, ‘I always get back my best pictures, because everyone wants last year’s pictures.’ Ellsworth agreed. No one is willing to take the leap; they don’t get where they’re going. Next year, they’ll want the pictures that they passed up.”

On Kelly’s Death
“He was on oxygen the last six years of his life, but his mind was there, his memory was there. He was in great shape. He did sort of have this quality of an 11-year old boy. He had that sense of wonder, even at 92.”

“Ellsworth Kelly: Color Panels for a Large Wall” is on view through January 19 at Matthew Marks, 522 West 22nd Street.