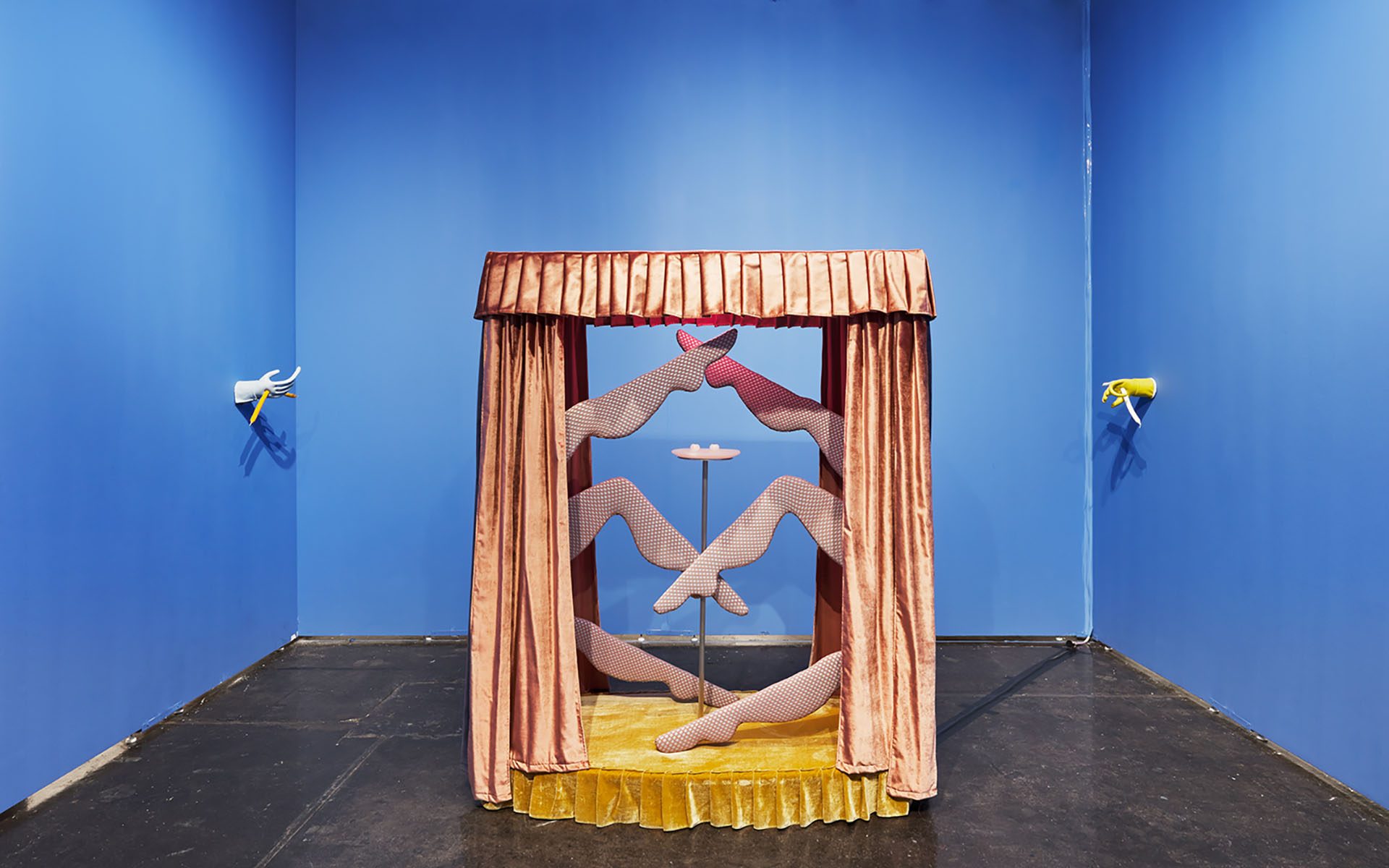 Celebrating the 20th edition of its Miami art fair, the New Art Dealers Association (NADA) has built a steadfast following of passionate collectors, known for revealing the newest work by emerging artists. When Untitled Art joined the growing group of satellite art fairs taking place in conjunction with Art Basel Miami Beach in 2012, it picked up the mantel of showing new work by younger artists alongside older practitioners who provide a context for changing trends.

With NADA returning to Miami’s edgy Ice Palace Studios, where it got its start, and Untitled Art back in its expansive white tent on Miami Beach’s sandy shoreline, Galerie combed the competing art fairs for a curated overview of new work created by a fresh collection of talented young artists. 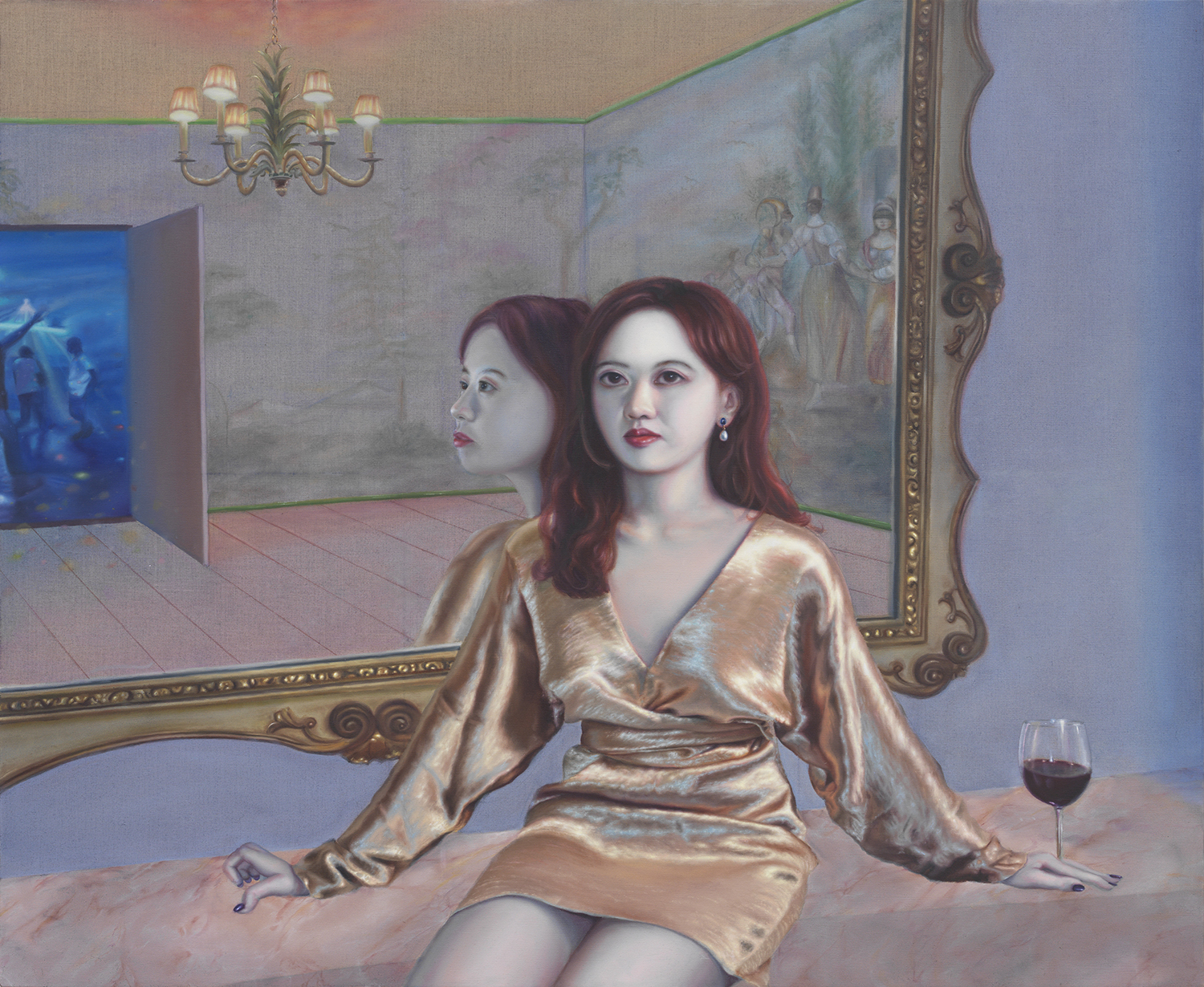 A young British painter living and working in New York, Hannah Murray came to the attention of gallerist Lauren Marinaro while the artist was attending a summer residency in 2021 at the New York Art Academy, where she had recently earned her MFA and honored as a Chubb Fellow. Fresh off her first solo show in May of this year at Marinaro at its new Tribeca location in New York, where she presented 10 enchanting canvases of new friends and old, Murray is back with a new group of labor-intensive, hyper-realistic paintings that place her radient pals in seductive settings for the gallery’s lively mix of abstraction and figuration at NADA. 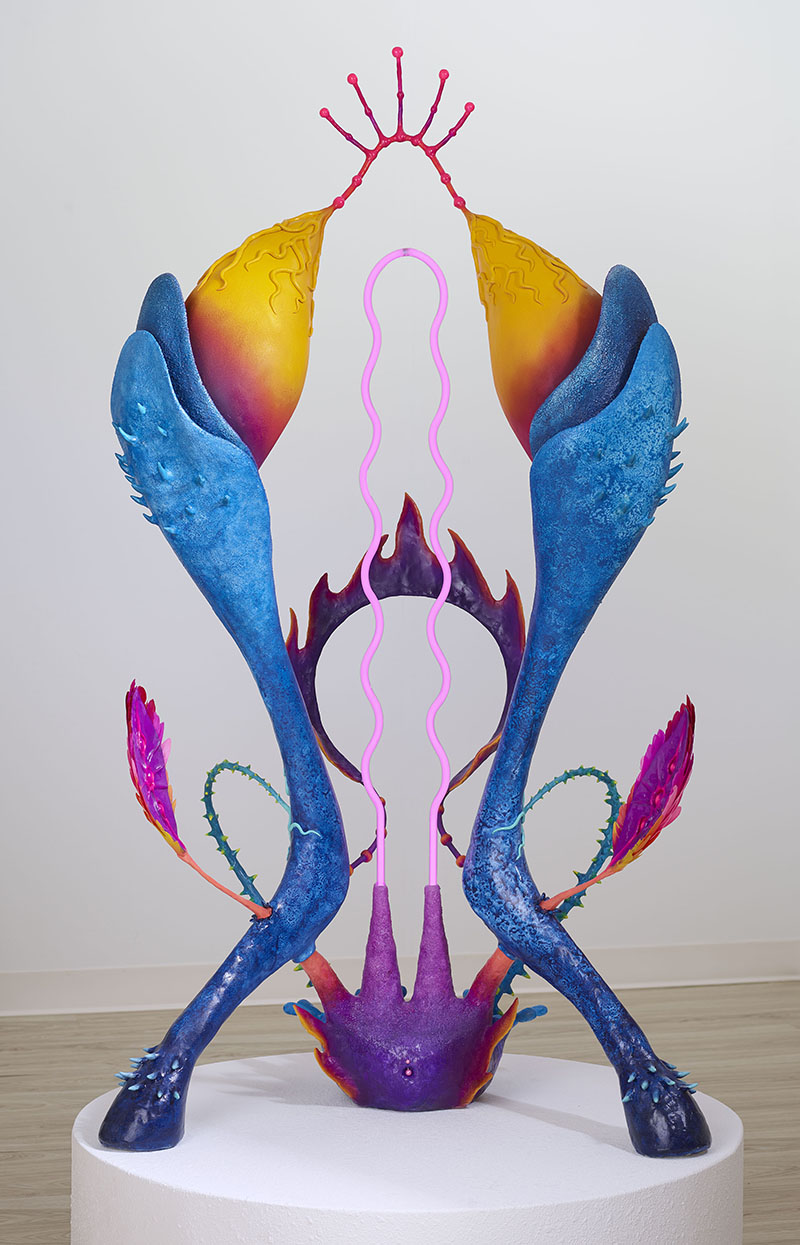 A young Taiwanese sculptor living and working in Brooklyn, Vincent CY Chen received his BFA from the School of Visual Arts in 2015 and followed that with an MFA from New York University in 2019. Exhibiting in group shows while still in school, he has gradually been gaining attention for his unique, hand-built sculptures of exotic plants incorporating erotic neon elements. Brilliantly constructed with a variety of symbolic forms and synthetic materials, including fiberglass, resin, and polystyrene, his three pieces at Steve Turner’s booth at Untitled Art look like vegetation brought back from a futuristic planet by the Starship Enterprise, while more metaphorically conjuring thoughts of earthbound couples frolicking the night away. 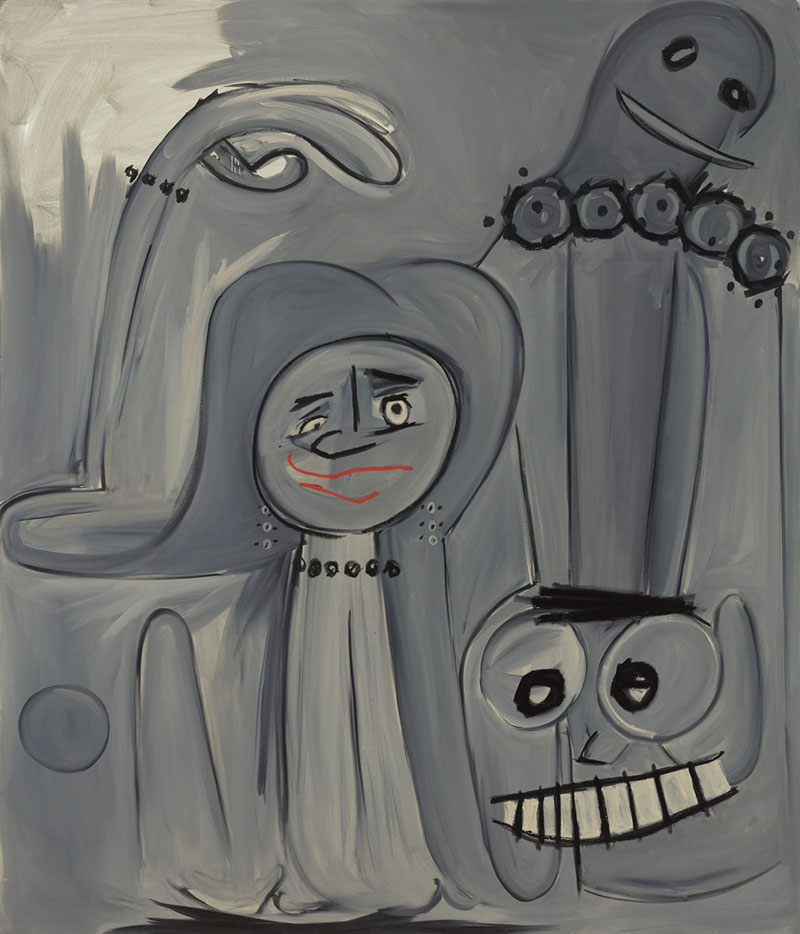 After earning a degree in photography, Milo Matthieu turned his attention to painting and sculpture, quickly finding an audience and collectors in group shows and—more recently—solo shows at the hip Cabin LA (a gallery in a collector’s backyard that’s modeled after Unabomber Ted Kaczynski’s remote Montana hideaway), Kravets Wehby Gallery in New York and Sorry We’re Closed in Brussels. The Los Angeles-born, Brooklyn-based American-Haitian artist draws upon the narrative nature of the photographic medium to tell different types of visual tales with his paintings.

Inspired by the Creole way of storytelling by patching details together to get to the end result in a roundabout way, Matthieu has established a form of figuration with colorful, wide-eyed, toothy characters who are full of life. His joyful gathering of jazzy people continues at Sorry We’re Closed’s large NADA booth, where his expressive paintings are paired with ceramic vessels by Roger Herman. However, the painter’s palette has changed to gray and the number of people crowding the canvas has grown bigger and a bit darker in spirit, as this body of work was based on the Haitian carnival tradition of allowing the slaves to partake only after the masters were done with their fun. 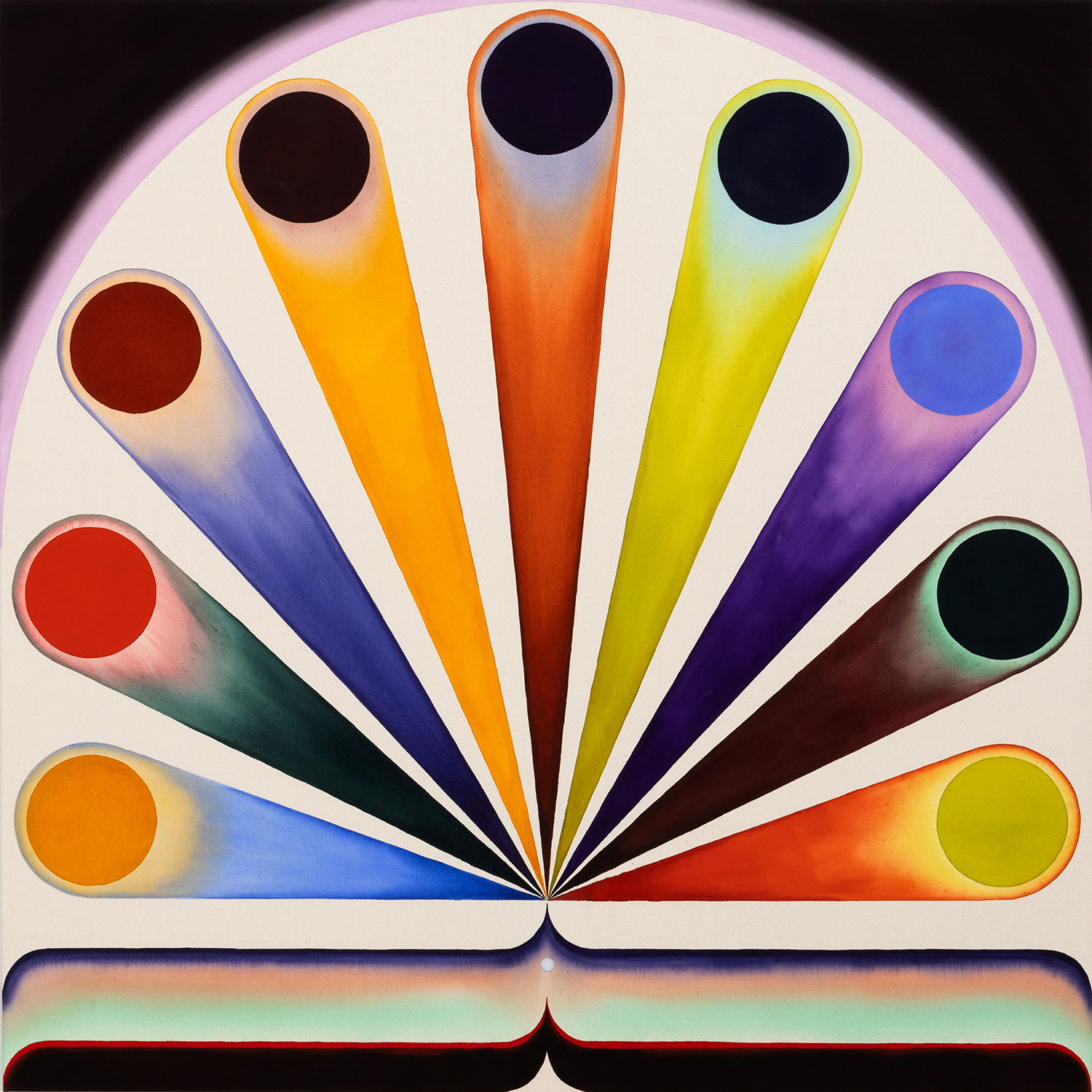 Mixing hard and soft edges to make abstract paintings that resonate with spirituality, Michael Childress applies acrylic to raw canvas wet with water, allowing the paint to flow. Directing the viewer’s eye to the flow with circular geometric forms, the Massachusetts and New York-based artist creates pulsating patterns with a visual push and pull that gives the appearance of an otherworldly atmosphere. Potential graphs for meditation, philosophical thought or merely daydreaming, his colorful canvases, project the power of eye-catching portals on the back wall of Hesse Flatow’s booth at Untitled Art. Continuing the artist’s “Equivalents” series, which he first exhibited at the New York gallery in a solo show last summer, the paintings point to a path past the figurative art that has dominated the art world in recent years.

Born in Milan to Colombian and Peruvian parents, Maria A. Guzmán Capron moved to Texas with her family as a teenager, where she earned her BFA in painting from the University of Houston in 2004. She didn’t get her MFA in Interdisciplinary Studio at the California College of the Arts in Oakland until 2015, after which she slowly began to exhibit her work. Presenting painted and collaged textiles pieces at NADA with her Los Angeles gallery, Shulamit Nazarian, Capron displays her skill at creating quilt-like, whimsical figures from bits of patterned fabric paired with some equally imaginative brushwork. Definitely one to watch, she had her first museum show at Houston’s Blaffer Art Museum this past summer and has an upcoming show at SFMoMA, opening later this month. 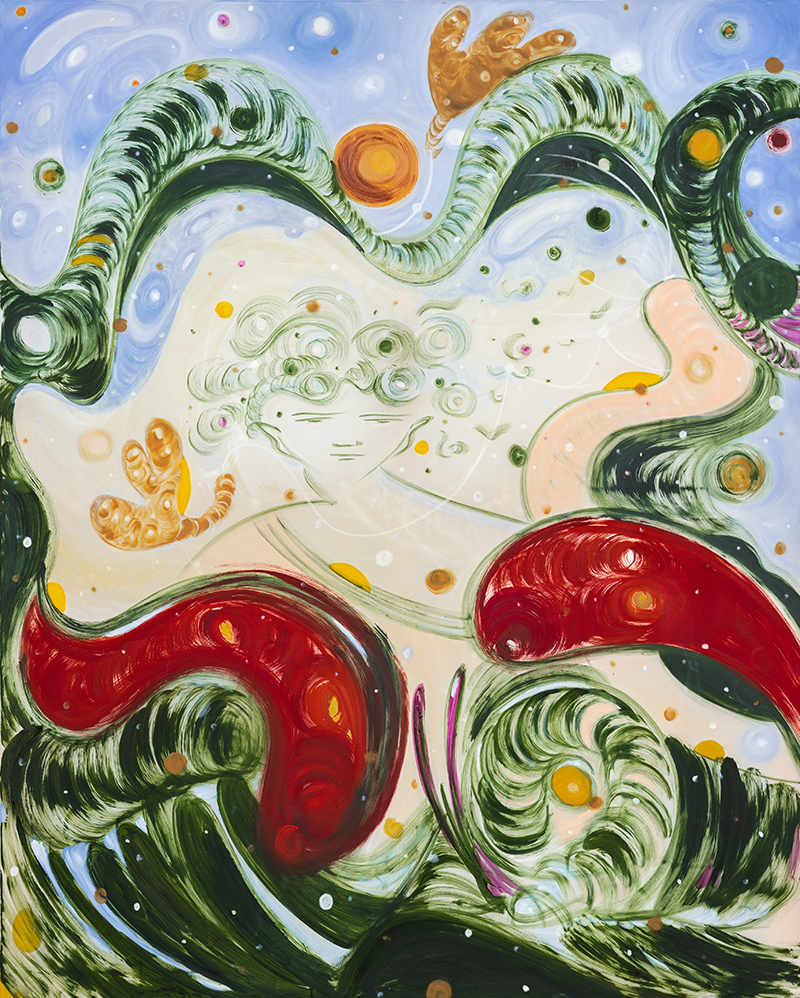 Exhibiting internationally since receiving her Master’s Degree in Fine Art from London’s Royal College of Art in 2019, painter and ceramicist Yulia Iosilzon creates playfully rendered cartoonish characterizations of women in abstract fields of color in a series of dreamlike paintings at Brooklyn-based Carvalho Park’s booth at Untitled Art. The Moscow-born, Israeli artist has an incredible knack for painting blissful sirens, which are most likely self-portraits, in lush, swirling Garden of Eden settings. Whether on a small scale or massively large, her paintings have the ability to keep your eye in motion as it streams through her brilliant brushwork and sublime combination of colors. 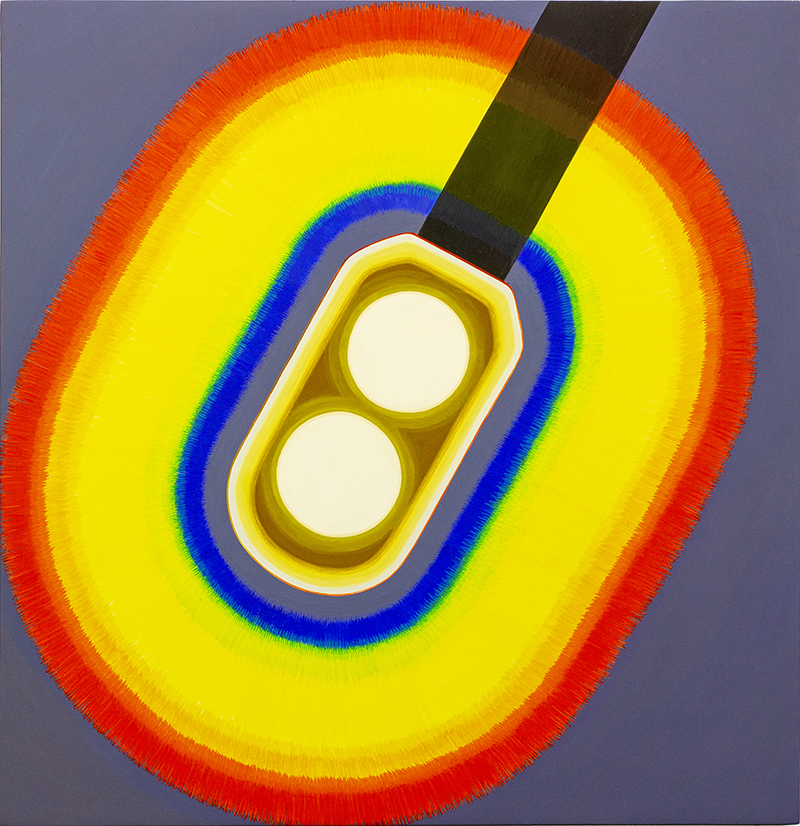 Rebelling against a religious upbringing, Brooklyn-based painter Lee Maxey focuses on the mundane rather than the miraculous in her intimate egg tempura paintings at New York’s Olympia gallery booth at NADA. Creating what her gallery calls “queer emblems of a mystical world,” the Arkansas-born artist depicts everyday objects in a wonky way, where things are seen as they actually are or how they imaginatively could be instead of how societal norms dictate they should be. Altering shadows, symbols and perception in her realistically rendered paintings, Maxey proposes new possibilities for living a spiritual life.

Inspired by the folklore, mythology and dark humor of his native Hungary filtered through the surreal nature of cartoons, comics and children’s books, London-based artist Szabolcs Bozó makes paintings that explode with lively colors and impish faces. Fresh from his first museum solo show in China at M WOODS in Beijing, Bozó’s one-person booth at Carl Kostyál is one of the standout presentations at Untitled Art this year. Removing the artist’s studio floor and shipping it to Miami Beach, the gallery has recreated his actual working ambience by installing the paint-splattered, checkered linoleum with the painter’s spirited canvases mounted on walls covered with a smattering of his delightful archived drawings. His feel-good canvases of cheerful animals cavorting in fields of color are the perfect remedy for the often-dark times we dwell in. 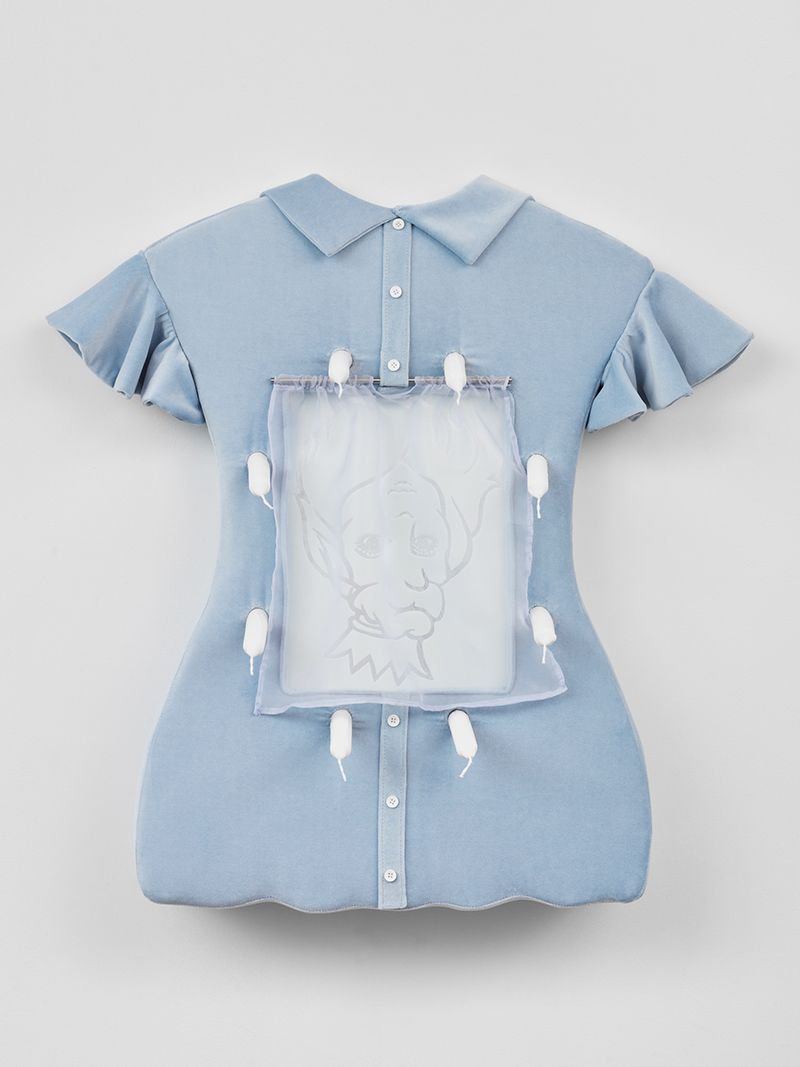 Beginning her art career anew after getting an MFA from CUNY Brookyn College in 2017, Rose Nestler started making whimsical soft sculptures and installations dealing with a feminist interpretation of women’s fashions and the role they play in defining patriarchal personalities. Exhibiting nine sculptures and wall reliefs that take cues from the theatricality encouraged by performing femininity, the Brooklyn-based artist turns her solo presentation at New York’s Mrs. gallery’s NADA booth into a surreal, sacred garret, where dainty dresses, stockings, gloves and shoes comingle with phallic candles and flowers and devilish faces to recall twisted religious tales. Commenting on the canonization of female saints, Nestler highlights the shared unwillingness of heroic women like Hildegard of Bingen to follow a forced, gendered path. 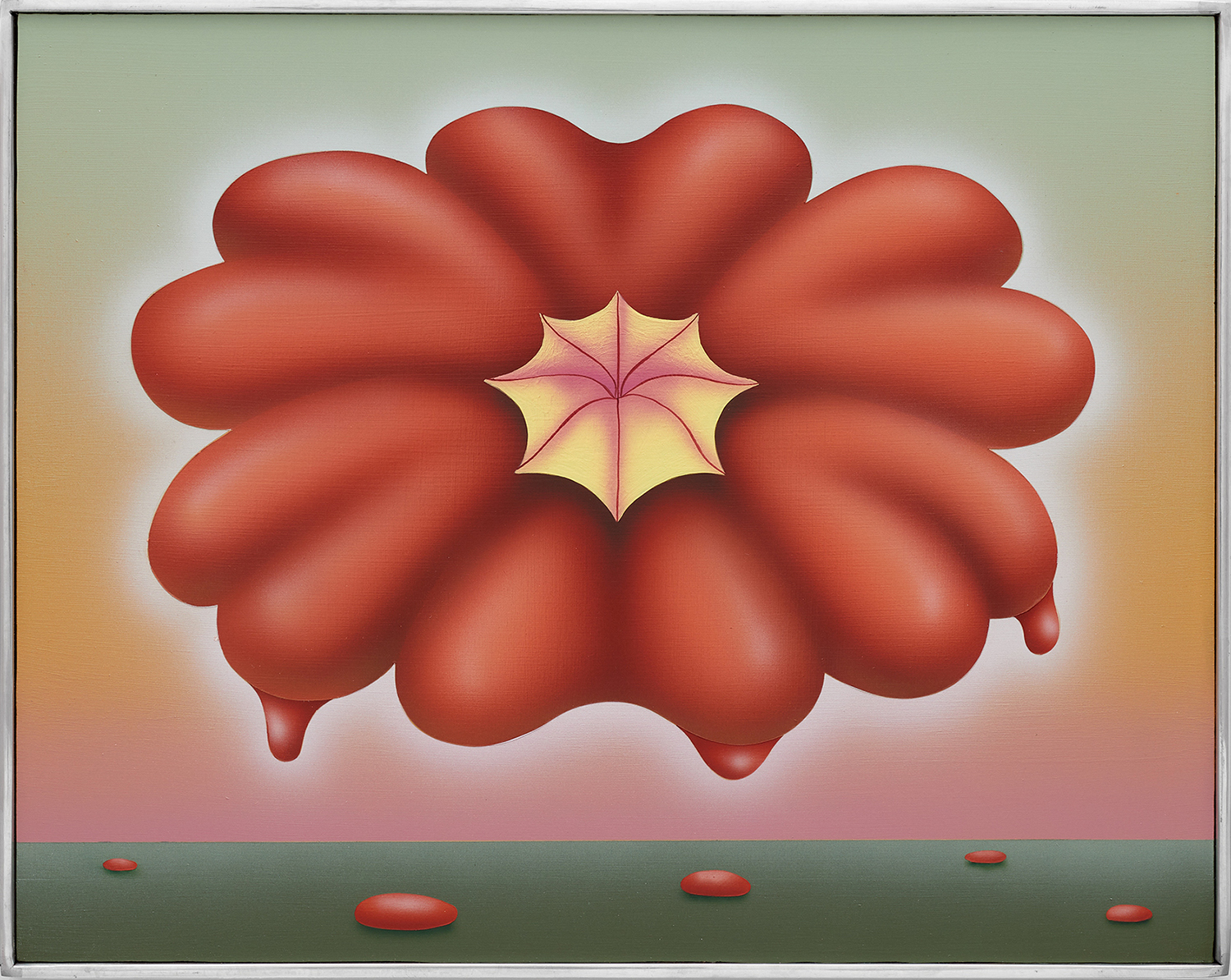 Graduating from Art Center College of Design in Pasadena in 2013, Ben Sanders is a multi-disciplinary artist who lives and works in Los Angeles. Exhibiting with Ochi gallery in Ketchum, Idaho and Los Angeles over the past few years, he’s created surreal paintings of poppies and colorful blown-up bottle cap sculptures, while also making imaginative commissioned work for Nike, Louis Vuitton and The New York Times. For his solo “Post Existence Postcards” show at Ochi’s booth at Untitled Art, the hyperrealist painter has created a series of small-scale canvases of trippy landscapes that offer an earthly vision of a post-human future. Mixing graphic design with the look of a Hollywood film set, Sanders makes images of a world that aliens could one day be flying over in search for the people who destroyed what they once had and now cannot be found.